Following the June 22 WWDC 2020 keynote, Apple released inaugural developer-only betas for its upcoming iOS 14 and iPadOS 14 software updates. If you have an Apple developer account, you can download and install the iOS 14 beta or the iPadOS 14 beta right now.

Apple has said that first public betas for iOS 14, iPadOS 14 and other OS updates are coming soon to all members of the Apple Beta Software Program through the company’s dedicated website at beta.apple.com. Until public betas arrive, members of the Apple Developer Program can access developer-only betas of iOS 14 and iPadOS 14 at developer.apple.com.

Apple makes it clear these betas are not to be used by non-developers:

This version is intended exclusively for software developers to test their apps and start adopting the new technologies in iOS 14 and iPadOS 14. Make sure to back up your device and install only on systems you are prepared to erase if necessary.

Caveats apply: Don’t instal pre-release software on any devices you depend on every day.

Now, iDownloadBlog understands that there are people out there who prefer to live on the bleeding edge, but even those brave types should approach these developer betas cautiously. Unless you’re a developer with a spare device laying around somewhere that you could use to test the iOS 14 and iPadOS 14 betas, you’re wholeheartedly recommended to stay away from these early developer betas or at least refrain from installing them on your daily drivers until both iOS 14 and iPadOS 14 become available for public testing.

Before proceeding, verify that your iPhone and iPad meet the official system requirements for iOS 14 and iPadOS 14, as outlined further below.

iOS 14 is compatible with the following devices.

As you can see, the iOS 14 system requirements are the same as those for iOS 13.

iPadOS 14 is compatible with the following tablets:

You can install the betas in two ways.

How to install iOS 14 beta or iPadOS 14 beta

You can install the developer beta of iOS 14 or iPadOS 14 in two ways.

Firstly, you can restore your device to the beta via the Finder on a Catalina-enabled Mac, which will perform a clean install that will — importantly! — clear all data and settings on your device. Alternatively, you can opt for the second method that uses good ol’ Software Update mechanism to upgrade your device to the developer beta over the air without losing anything.

This method of installing the OS 14 beta or the iPadOS 14 beta is great if you have a Mac running the macOS 10.15 Catalina software — you don’t need to use Apple’s multi-gigabyte Xcode developer environment for that and you also don’t have to update your Mac to the macOS 11.0 Big Sur beta.

1) Using the iOS Safari browser on your iPhone or iPad device, visit Apple’s portal for developers at developer.apple.com/download and sign in with your Apple ID account. 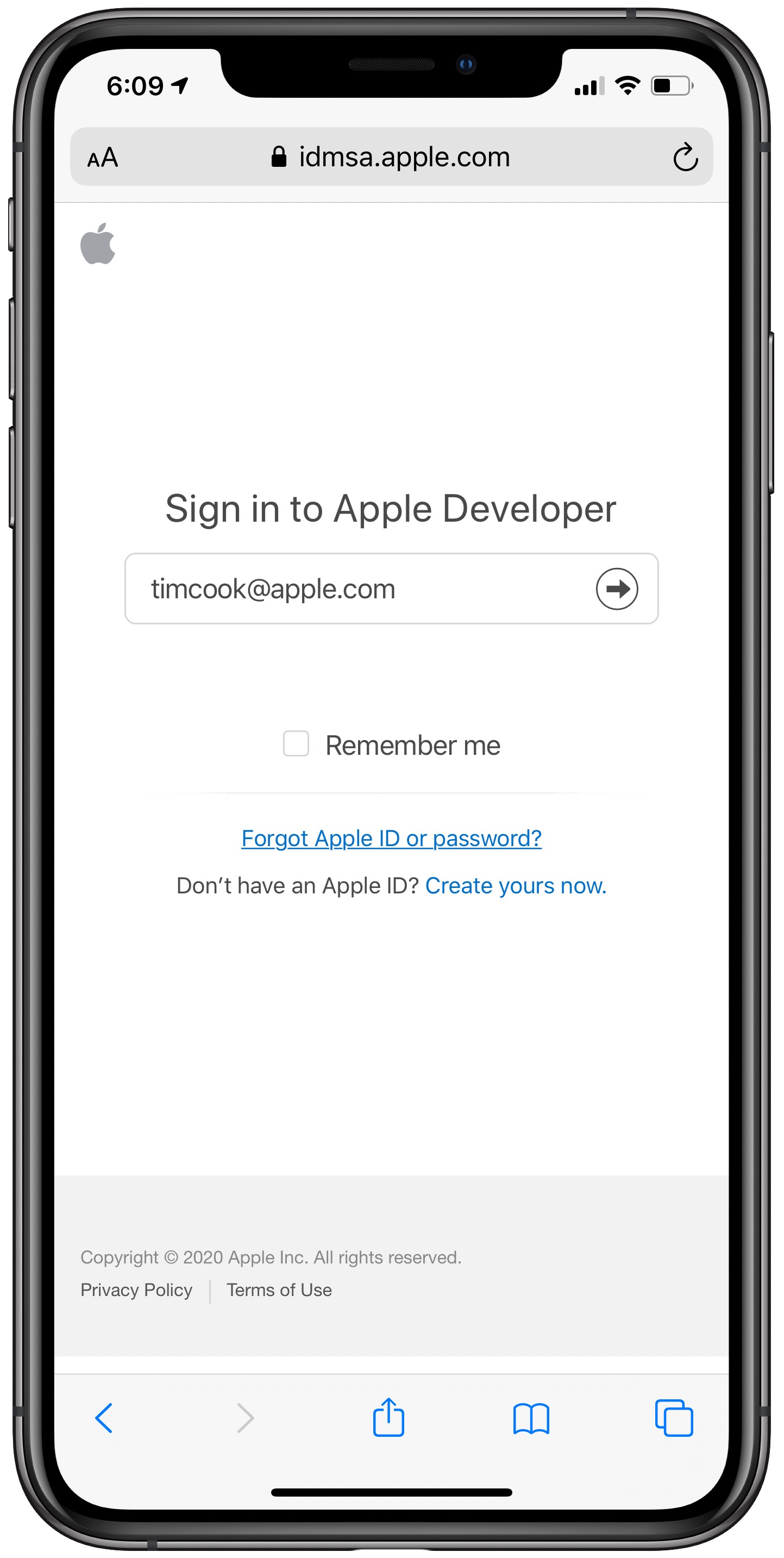 2) Tap Operating Systems underneath the heading Beta Software Downloads near the screen top, then click the button Install Profile in the iOS 14 Beta section or the iPadOS 14 Beta section, depending on which beta you wish to install. 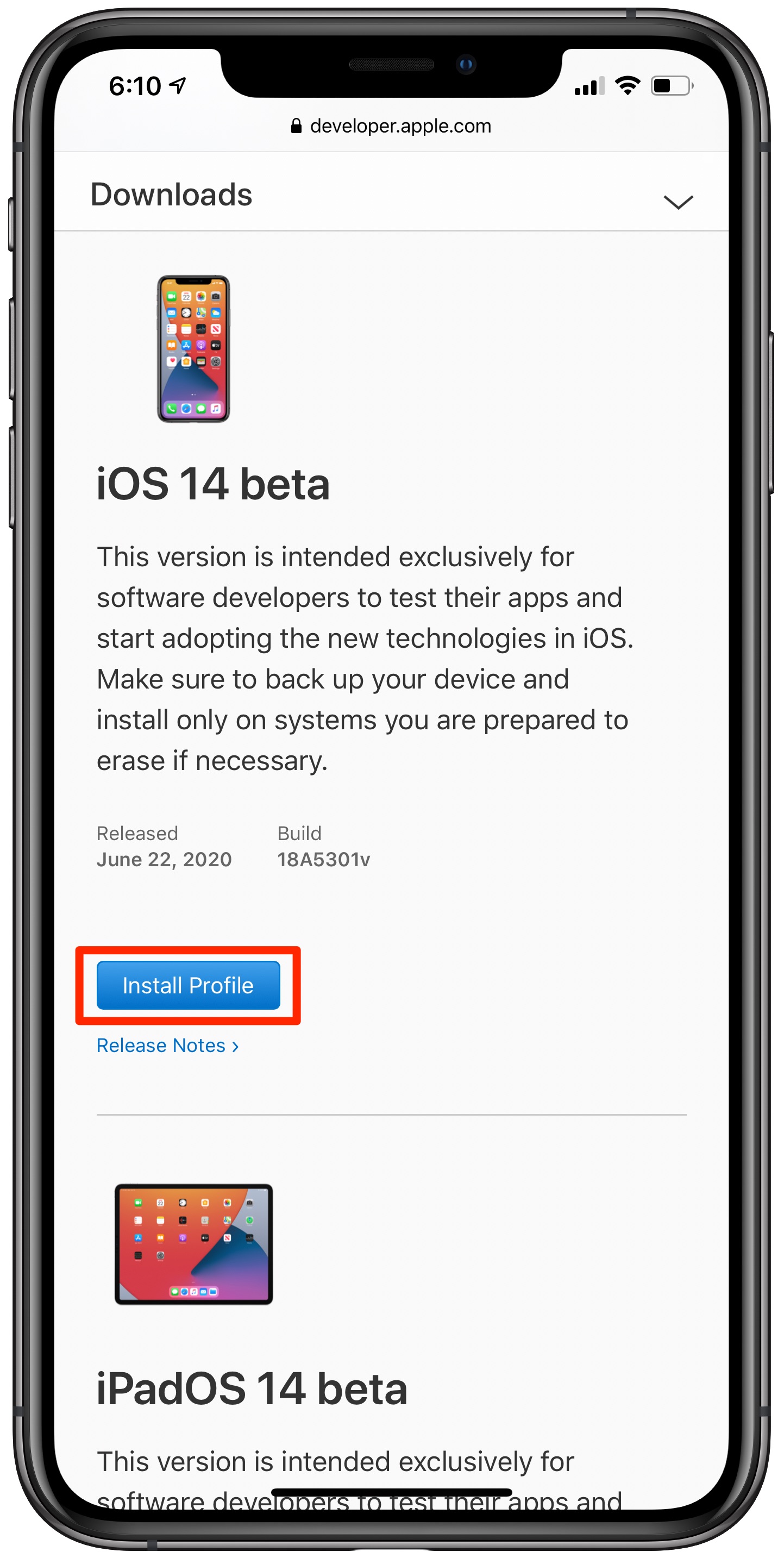 3) You’ll be greeted with a message saying that the website is attempting to download a configuration profile to your device. Authorize this action by tapping Allow. 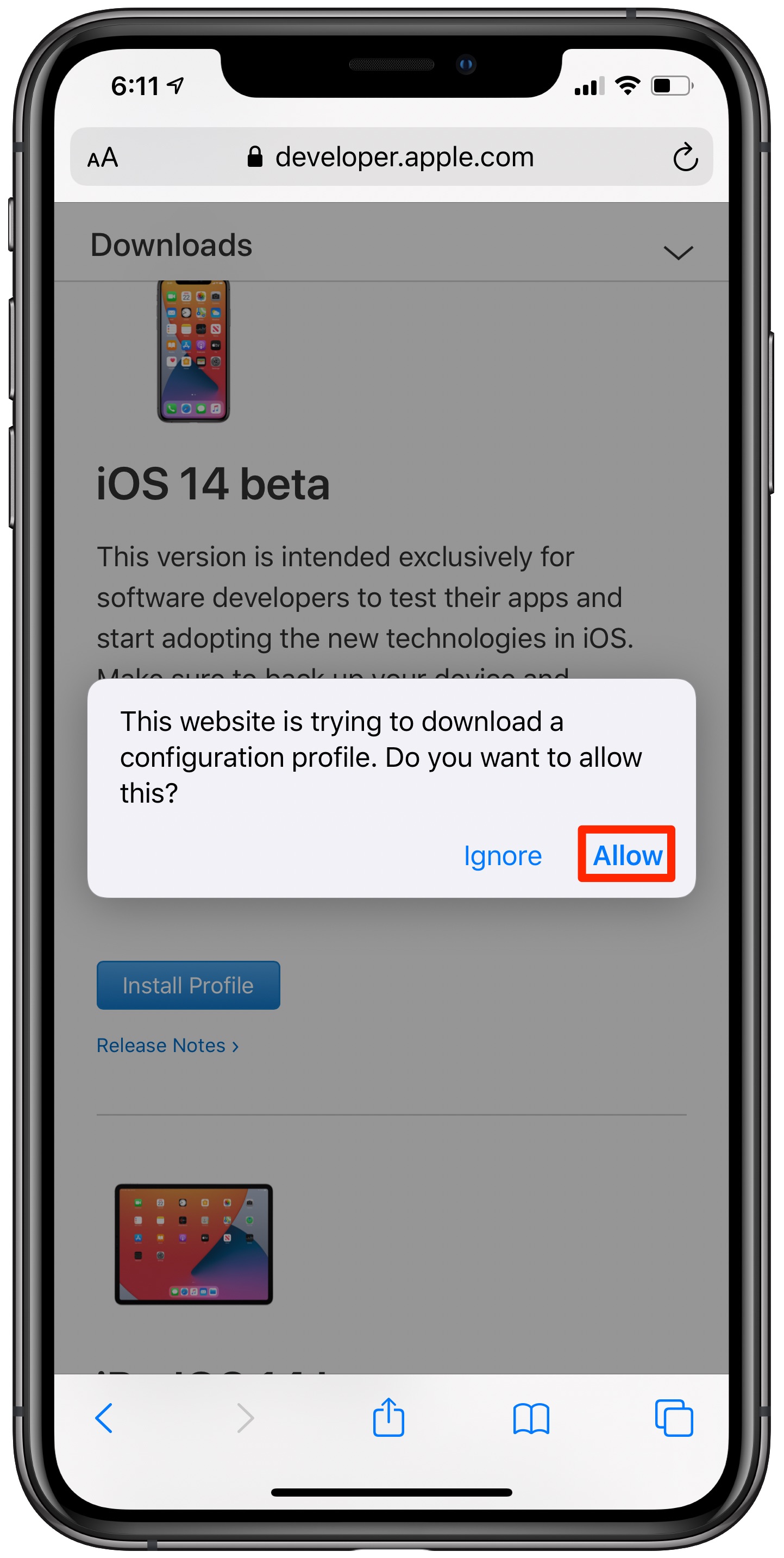 4) A message confirms the configuration profile has been downloaded. You’ll need to visit Settings to finish installing the profile, but first click Close to dismiss the message. 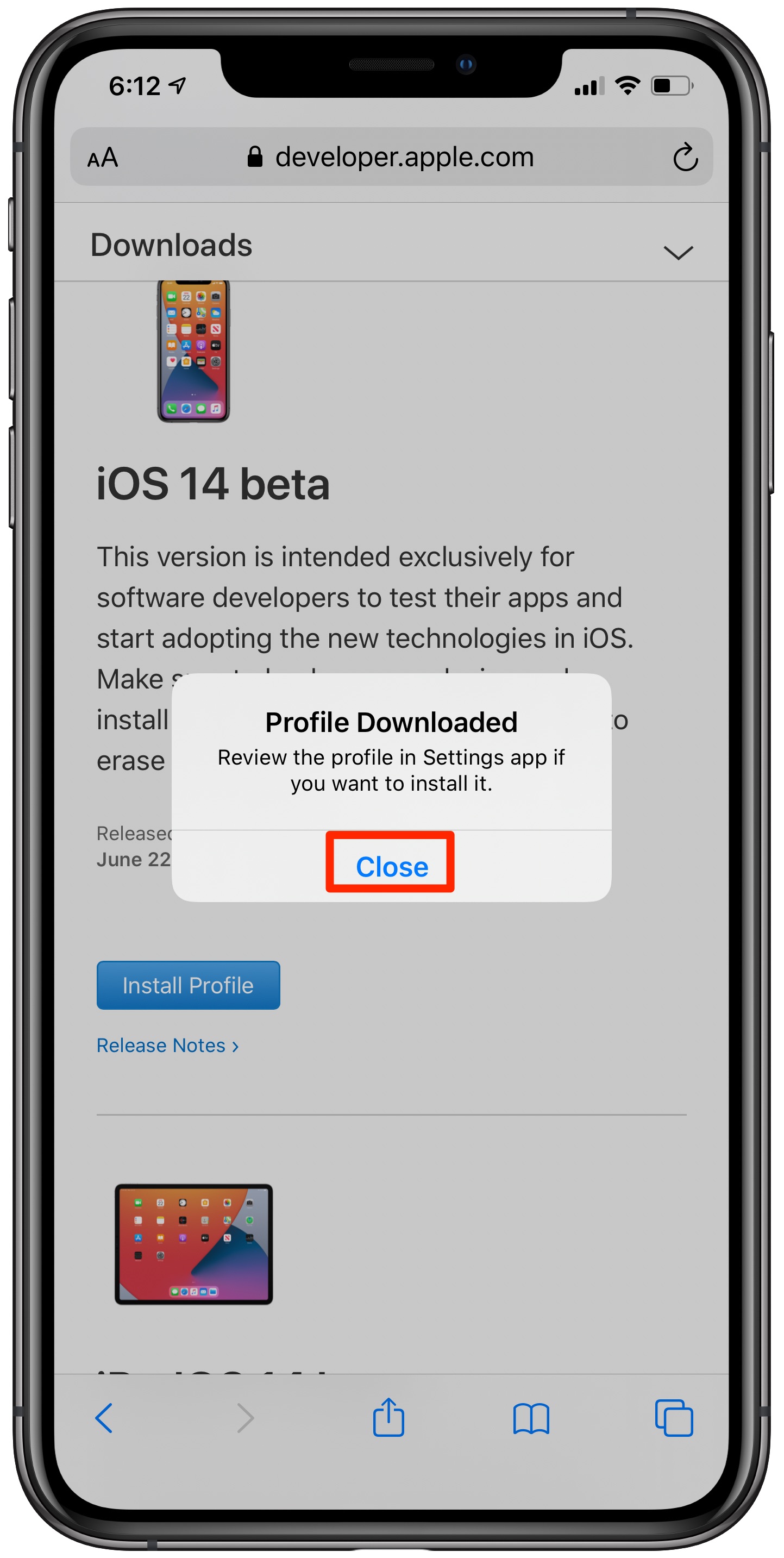 5) Now go to Settings → Profile Downloaded or visit Settings → General → Profile on your iOS device and tap the entry iOS 14 Beta Software Profile or the iPadOS 14 Beta Software Profile found underneath the heading Downloaded Profile. Apple’s configuration profile configures your iOS device for use with the developer beta. If you don’t see the configuration profile, it hasn’t downloaded at all or has downloaded incorrectly so go back to step 1. 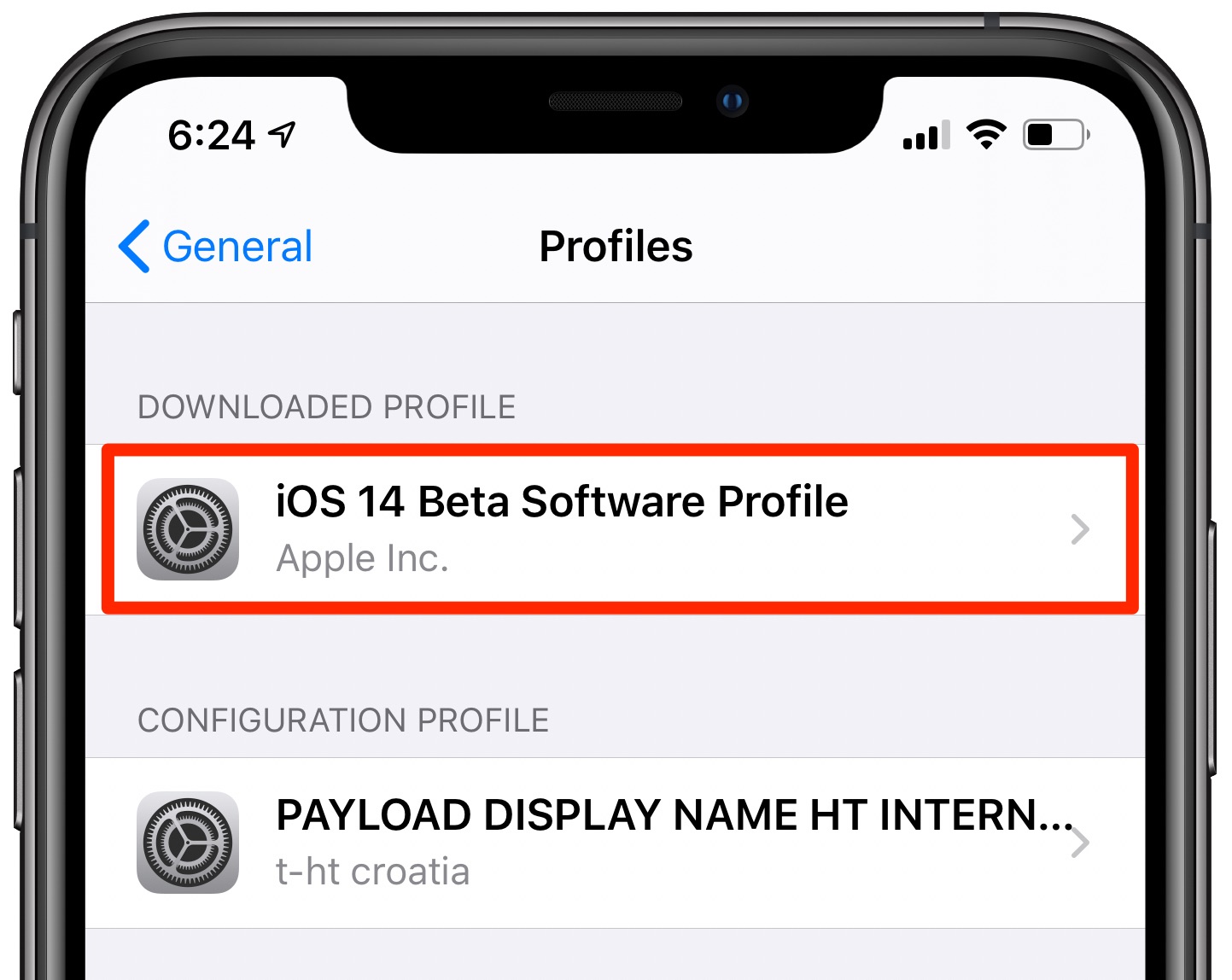 6) Tap Install in the upper-right corner to continue and enter your passcodes, if asked. 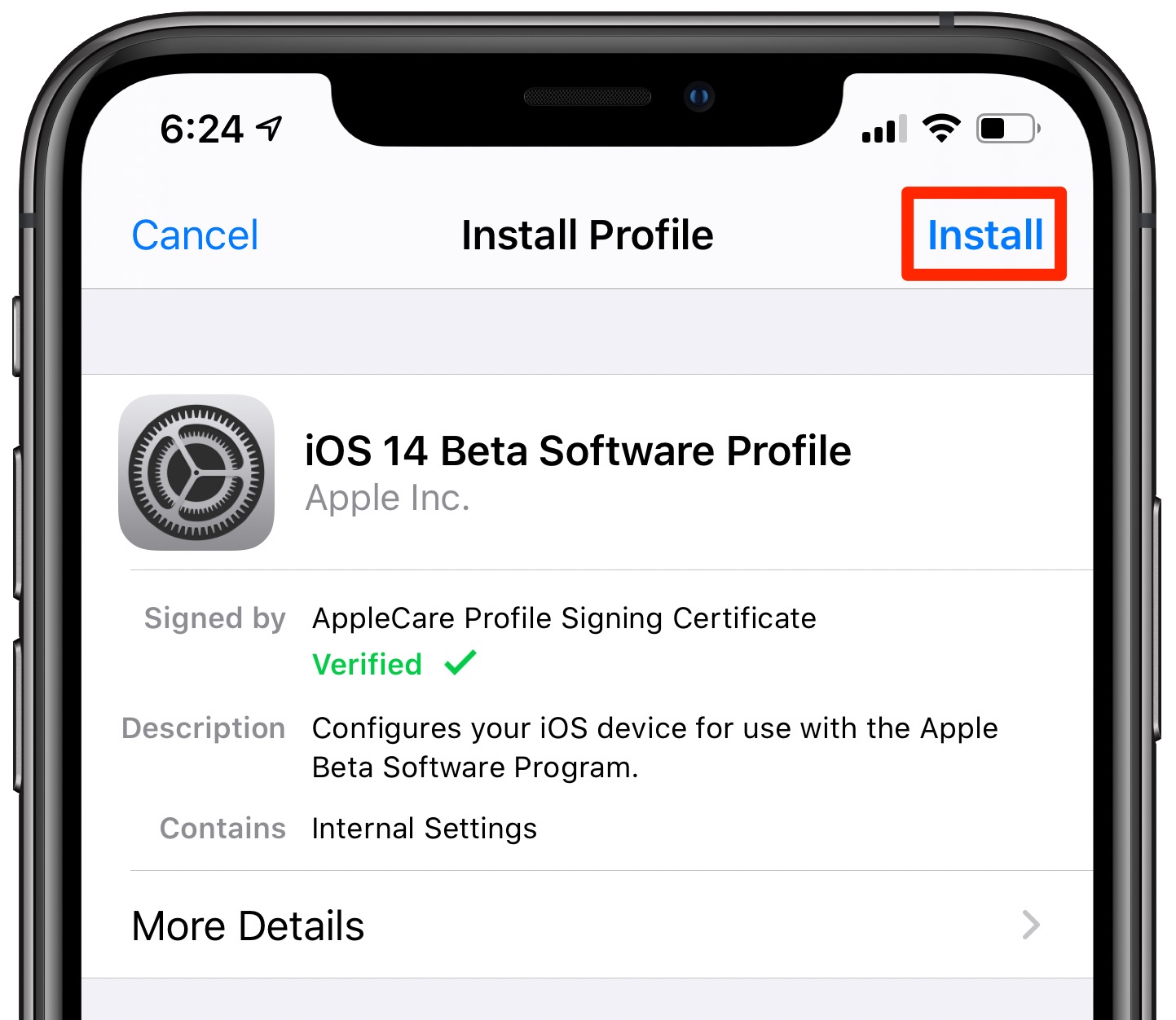 7) You must now consent to start the iOS or iPadOS 14 setup process. Tap the Install button in the upper-right corner to continue, then confirm the action by tapping Install in the popup menu. If you have changed your mind, just tap Cancel to abort the install process. 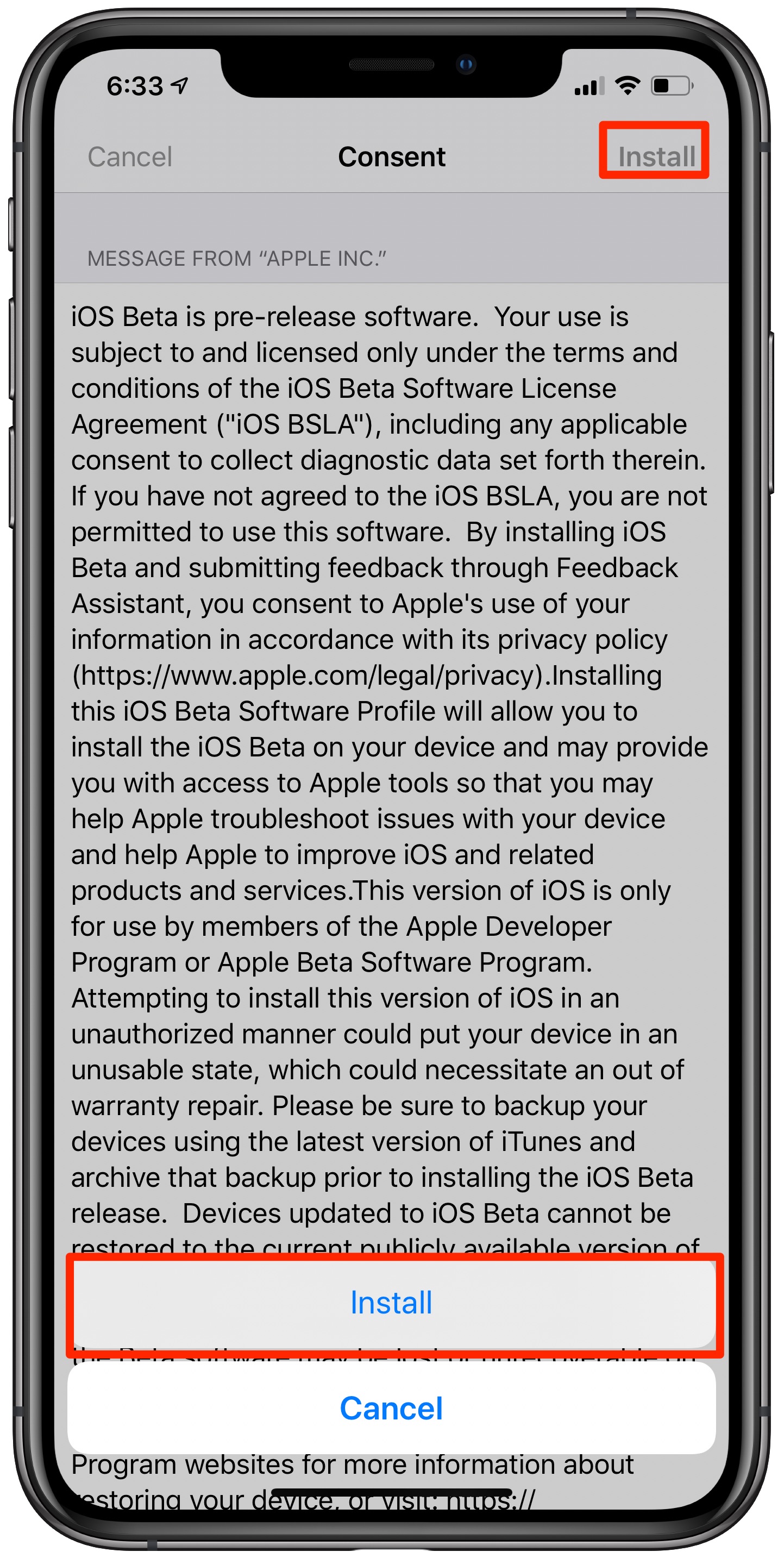 8) Lastly, you should see another dialog saying a restart of your iOS device will be required to begin the setup process. Tap Restart if you’d like to restart the device immediately or Not Now if you wish to manually restart at a later date. 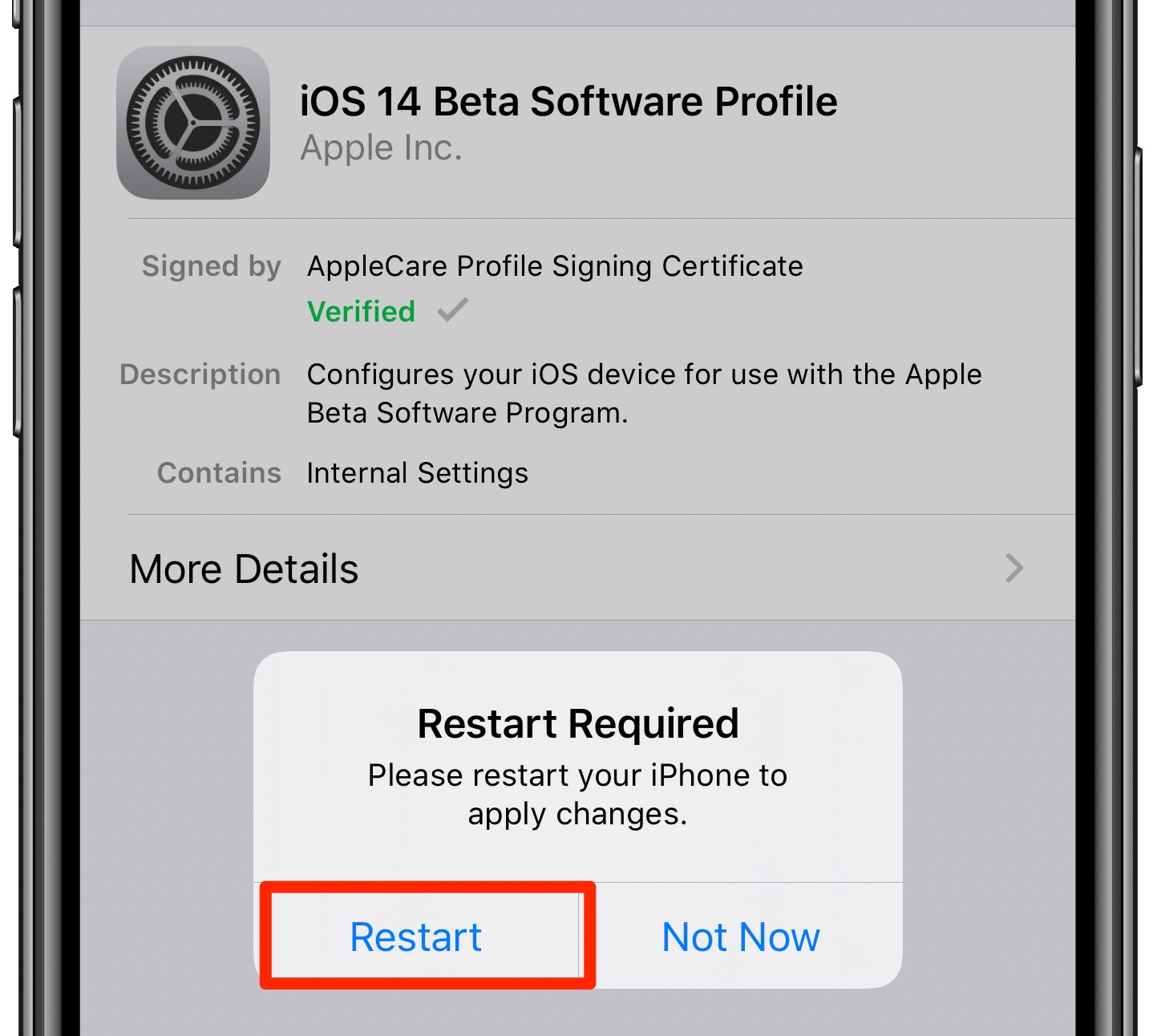 9) After your iOS device has restarted, go to Settings → General → Software Update and wait until the iOS or iPadOS 14 Developer Beta appears on the Software Update screen. To start the process, tap the button Download and Install and enter your passcode to continue, if asked.

10) Your device will now start installing the pre-release beta software, which may take some time so feel free to grab yourself a bite or something. After the device has rebooted to the iOS or iPadOS 14 developer beta, you’ll need to complete the update — tap Continue and type in your Apple ID password so the beta could update your iCloud settings. Once that’s done, hit the Get Started button and you’ll land on the Home screen of the iOS or iPadOS 14 beta.

iOS 14 and iPadOS 14 will release publicly this fall.