Apple’s first OLED-based iPhone will have three gigabytes of RAM like the current iPhone 7 Plus models and come in two storage capacities—64GB and 256GB—eliminating the current 32GB SKU as an entry-level option when it comes to storage size. It won’t feature a curved display due to production and drop test issues with 3D glass, as per Chinese research firm TrendForce.

TrendForce accurately predicted that iPhone 7 and iPhone 7 Plus would be available in 32/128/256GB storage capacities ahead of their introduction and correctly called for waterproofing and 3GB of RAM on the Plus model.

Based on supply chain chatter, TrendForce says the 10th anniversary iPhone (as affectionally dubbed by the media) will sport a 5.8-inch OLED display in 2K resolution, as previously rumored. Due to yield issues, however, the Chinese research firm doesn’t expect the OLED iPhone to adopt a curved display design like Samsung’s devices.

“The next high-end iPhone is expected to have the same 2.5D glass for display cover as the current models,” according to the report. Another standout iPhone 8 feature mentioned in the report: the widely expected removal of the physical Home button in favor of an in-screen variant. 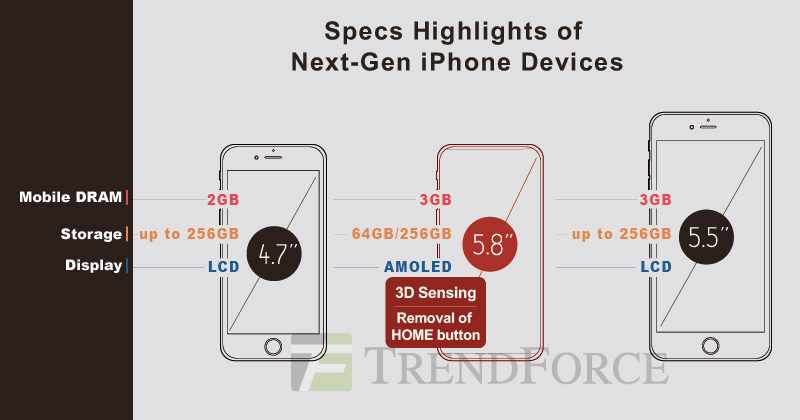 Combined with the skinnier side bezels, this should permit Apple to engineer a 5.8-inch phone without increasing total size of the device versus 4.7-inch iPhones.

“The display aspect ratio of iPhone 8 could exceed 2:1, while the phone’s overall body size could be similar to that of the next 4.7-inch model,” says the report.

As for the iterative LCD-based iPhone 7s and iPhone 7s Plus updates, TrendForce is expecting that 5.5-inch iPhone 7s Plus devices will sport three gigabytes of RAM, just like the current Plus models of iPhone 7.

The 4.7-inch iPhone 7s will come outfitted with two gigabytes of RAM. Both LCD models will include the maximum storage option of 256GB like the current generation.

Lastly, the report predicts that the 4.7-inch LCD phone will be “more economically priced” to compete against Chinese brands in regional markets. The flagship OLED device should cost more than $1,000, as previously rumored, due to advanced tech.

Most of the global production capacity for AMOLED smartphone panels will be used to fulfill orders from Samsung and Apple this year, TrendForce estimates. Apple’s rivals will have difficulty securing enough AMOLEDs to expand production and shipments.

Taiwanese trade publication DigiTimes said earlier that Apple’s competitors are facing a global shortage of OLEDs, which could prevent them from achieving the same kind of shipment growth as in last year.

Last but not least, the research firm estimates that the production volume of all 2017 iPhone models is projected to total around 230 million units, representing an annual increase of almost six percent over 2016, with the OLED-based iPhones accounting for at least forty percent of all units (about 100 million units) despite the higher prices.