In a note to clients, obtained by AppleInsider, the analyst writes that a pair of infrared transmitting and receiving sensors on the FaceTime camera will help the next iPhone provide features ranging from 3D sensing and modeling to advanced biometric authentication combining facial scanning and Touch ID fingerprint recognition.

Apple’s proprietary system will use technology from Israeli 3D sensor startup PrimeSense, which the iPhone maker acquired in November 2013. As a reminder, PrimeSense helped develop the original Microsoft Kinect technology.

PrimeSense technology will bring depth and location detection to the next iPhone’s FaceTime camera as its sensors were designed to detect the invisible infrared light signals reflected from objects.

The new FaceTime camera will be supplied by Sony while iPhone manufacturer Foxconn and its subsidiary Sharp will provide the infrared receiver with a 1.4-megapixel resolution, Kuo has it on good authority.

Those components will allow for a range of features that are currently impossible on iPhone’s existing FaceTime camera that lacks the hardware to support depth sensing.

For starters, you’ll be able to take a 3D selfie which could be used in augmented reality or replace the head of a character with that of a user in a new wave of 3D games, presumably using new APIs that will support said capabilities.

Other potential applications include the rumored two-step biometric verification system based on facial and/or iris recognition that Kuo predicts to be used in conjunction with the traditional Touch ID fingerprint scanning, not replace it completely. 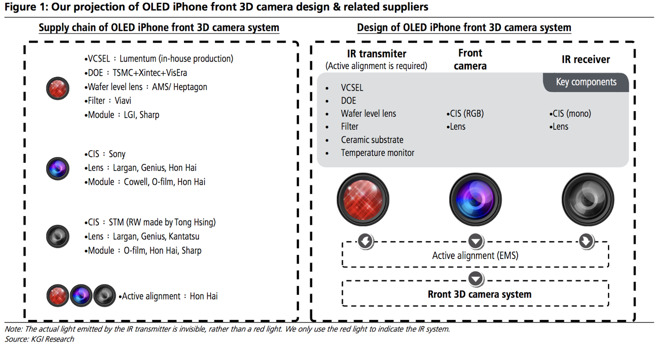 The analyst speculates that Apple’s bespoke infrared transmitter will be based on vertical-cavity surface-emitting laser technology from Lumentum. The new FaceTime camera should help improve the quality of 2D photographs and selfies, too.

As such, Kuo speculates, the tech will make its way into future iPhones as a potential replacement for the somewhat bulky dual-lens camera on iPhone 7 Plus.

The analyst is adamant that Apple will have at least a two-year head start in 3D sensing over Android handsets because its proprietary technology is reportedly very advanced.

“Future iPhones may come with a similar system for the rear camera,” he noted.

What do you make of all this, guys?