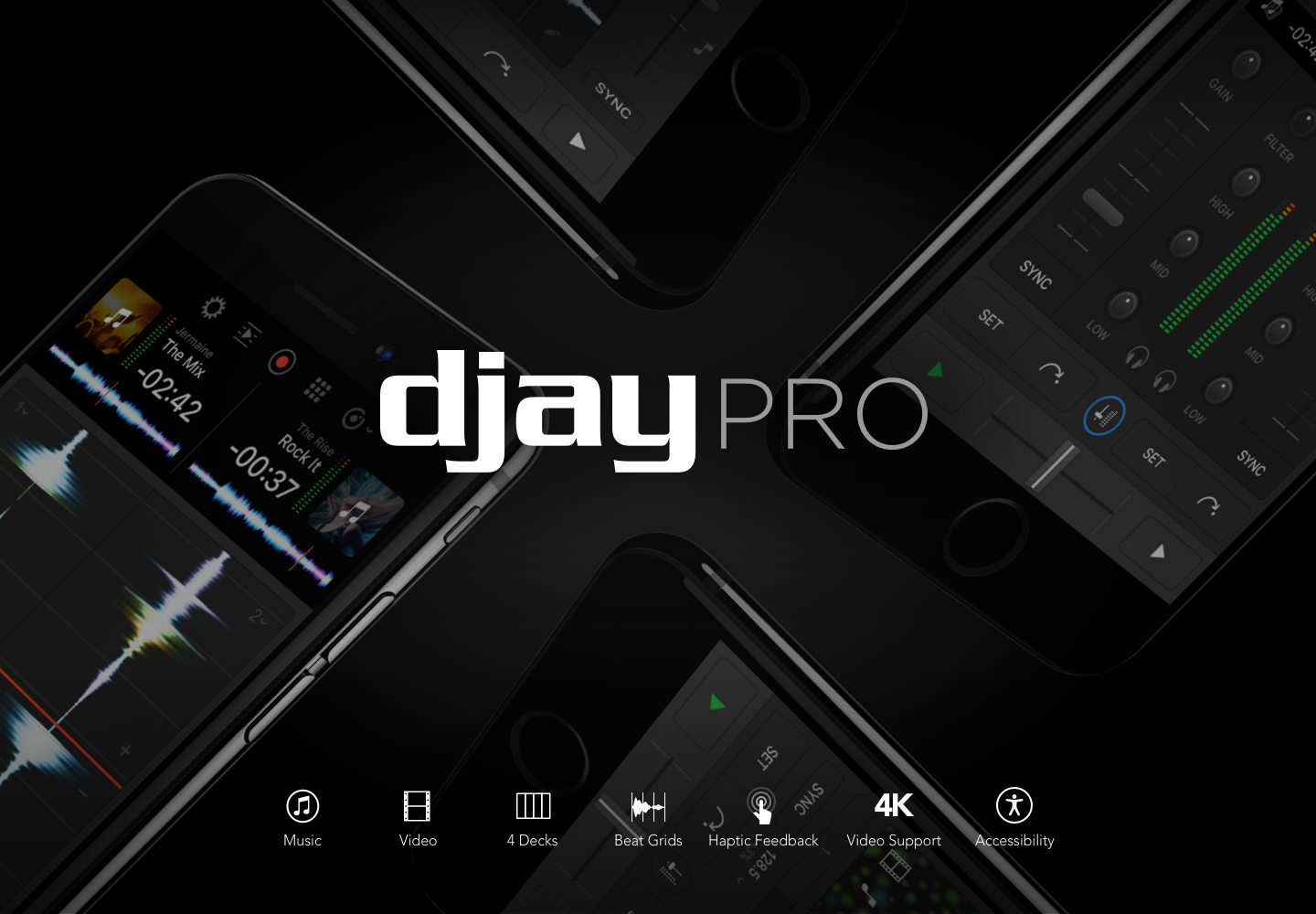 The app puts the complete djay experience in the palm of your hand and provides some iPhone 7-specific features, like unique haptic feedback that lets you literally feel the beats while scratching and scrubbing the music, support for 3D Touch so you can quickly set a cue point by pressing and more.

djay Pro for iPhone is available on the App Store at the introductory sale price of $4.99.

“djay Pro has been a huge hit on Mac and iPad,” said Karim Morsy, CEO of Algoriddim. “iPhone 7 has enabled us to completely transform the user experience of djay Pro by using haptic feedback and 3D Touch. It puts a fully-featured DJ system in your pocket so you can be creative no matter where you are.”

Not just a resized iPad app

Rather than just create a shrunken down version of djay Pro for iPad, Algoriddim optimized the app for iPhone’s smaller form factor. It works in landscape and portrait modes without missing a beat and that includes the app’s four-deck mixing mode. 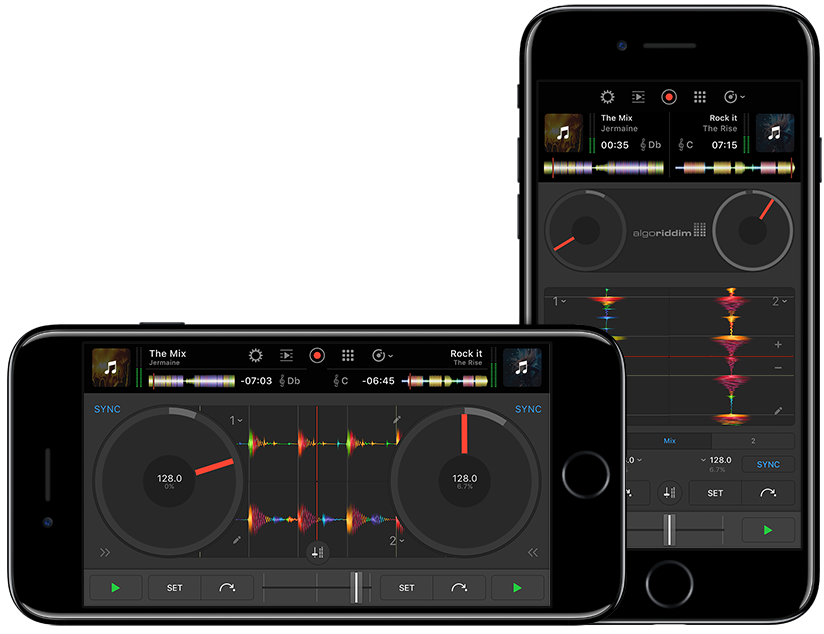 I think that’s pretty remarkable for such a feature-rich app, and the user interface actually optimizes itself based on what you’re currently doing and the set of features that are currently visible on the screen. Before I dive deeper into what djay Pro for iPhone offers to expert and wannabe DJs alike, let me quickly share Algoriddim’s promotional video so you get a better feel for it.

I was also surprise to learn that the app has native support for hardware DJ controllers including Reloop Beatpad, Reloop Beatpad 2, Pioneer DDJ- WeGO 3 and 4 and Numark’s Mixdeck Quad. That’s just the beginning as the app supports multi-channel USB audio interfaces, a real feat for an iPhone app.

And thanks to iCloud integration, you can sync your cue points, grid edits and metadata between iOS and Mac versions of djay.

djay Pro for iPhone was built from the ground up for iPhone 7 with full support for features like rich haptic feedback and 3D Touch gestures. For example, on iPhone 7 or iPhone 7 Plus the app uses haptics on high definition waveforms, which lets you actually feel the beats while scratching and scrubbing the music. 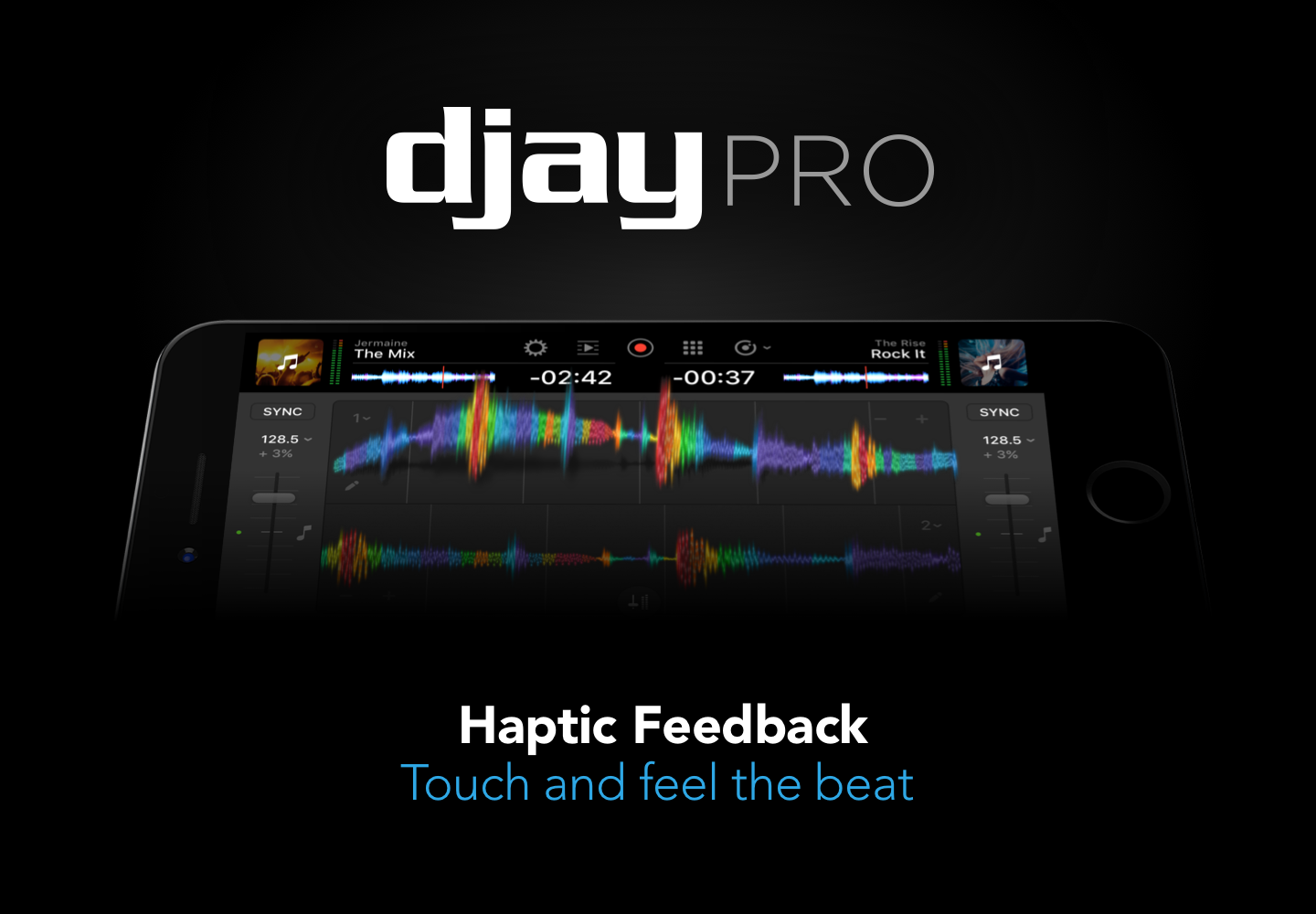 It’s one of those features that seem gimmicky on paper but you really appreciate it once you start using it. djay’s use of 3D Touch is smart, too: instead of fiddling with on-screen buttons to set a cue point, you can simply scroll the waveform to a specific place in the song and press with 3D Touch to instantly create a cue point.

It’s one of the most useful implementations of 3D Touch in apps so far, period. 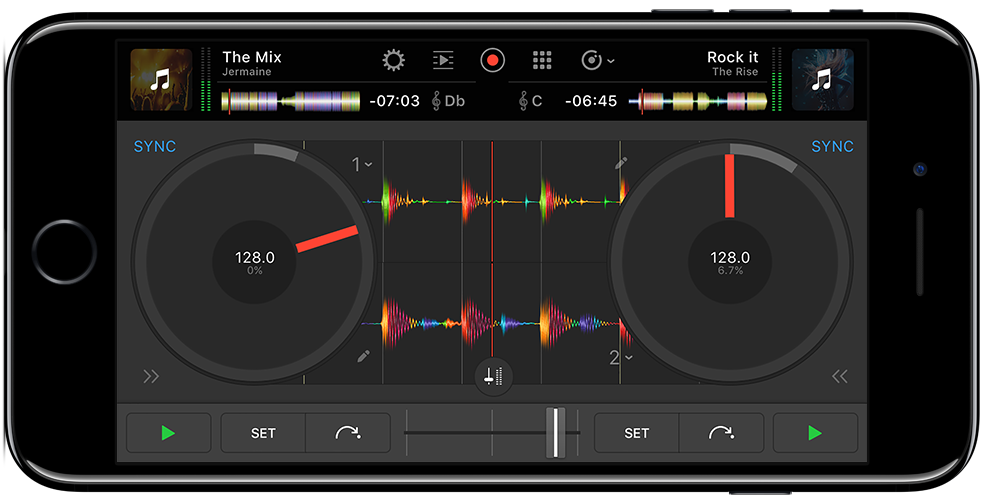 djay Pro for iPhone supports 1080p rendering for your video mixes and video output via a Lightning to HDMI cable or Apple’s AirPlay wireless media streaming technology. Taking full advantage of GPU acceleration and Apple-designed chips in your device, this app lets you use pre-bundled motion backgrounds, or import your own from the Camera roll to perform video mixes cued to music (4K video is supported). 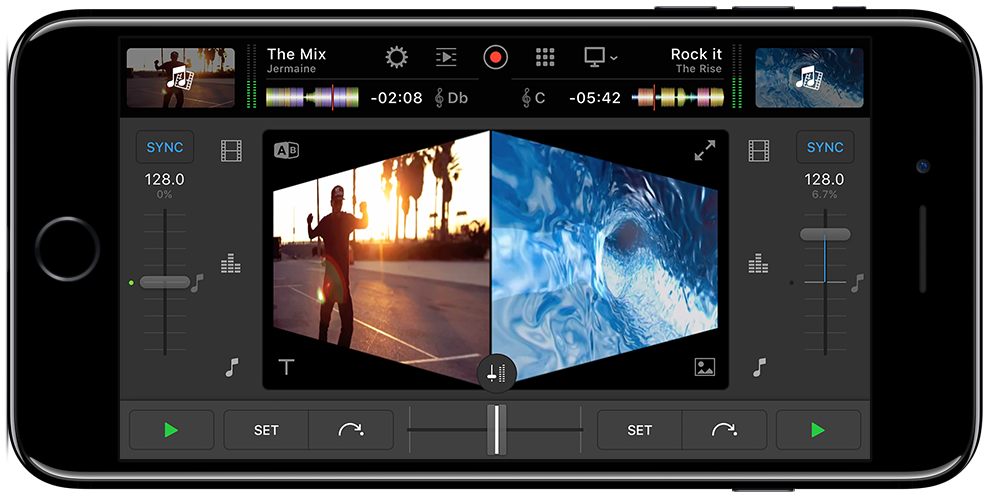 The various visualizations at your disposal include attractive transitions, various music visualizers and visual effects, titles, images overlays and more. 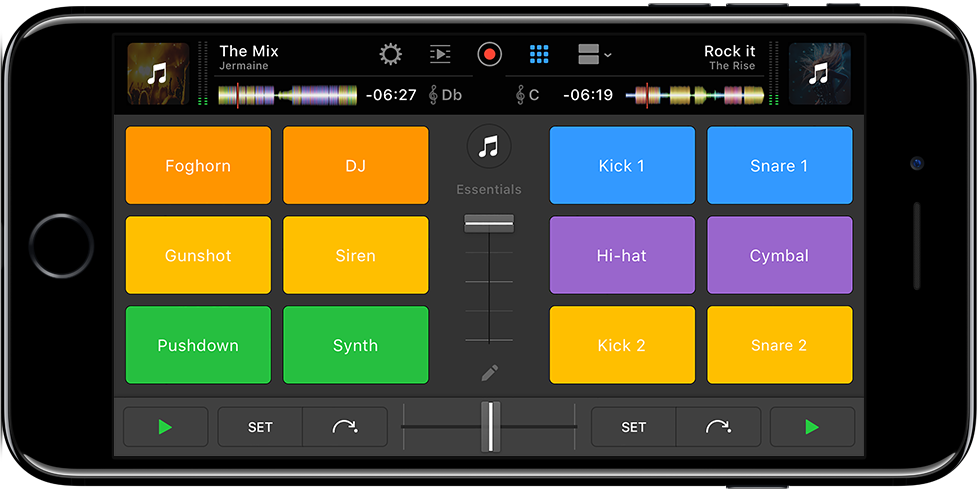 This not only lets you use songs in your Spotify playlists, like before, but mix curated playlists and find new music by mood, genre and popularity—without leaving the app. Spotify fans will appreciate cloud-based song recommendations, access to BPM and Key information through the cloud and support for streams of up to 320 kbps bitrate. 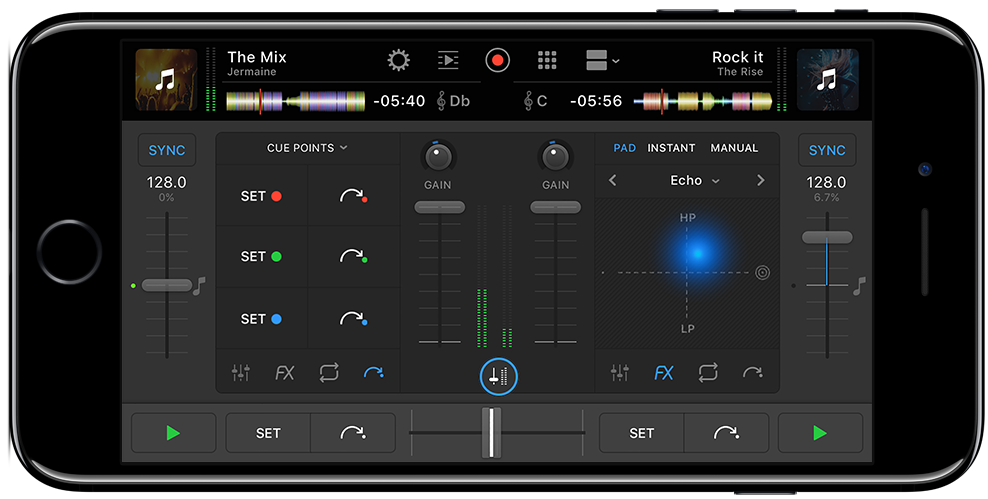 Keep in mind that you must first download songs in iCloud via the Music app before you can use them in djay Pro. DRM-protected songs are unsupported.

You can, of course, control djay Pro for iPhone remotely with a low-latency Apple Watch app that takes advantage of Apple’s latest technologies introduced with watchOS 3. You can browse playlists, cue up and mix songs, run Automix mode and more—right from your wrist and all while controlling advanced audio effects and loops in real-time.

Algoriddim won 2016 Apple Design Award for djay Pro on iPad and Mac. In fact, Apple demoed the app by having a blind DJ drop a few beats during the WWDC 2016 awards ceremony. You can stream that video from Apple’s website, if you’d like. 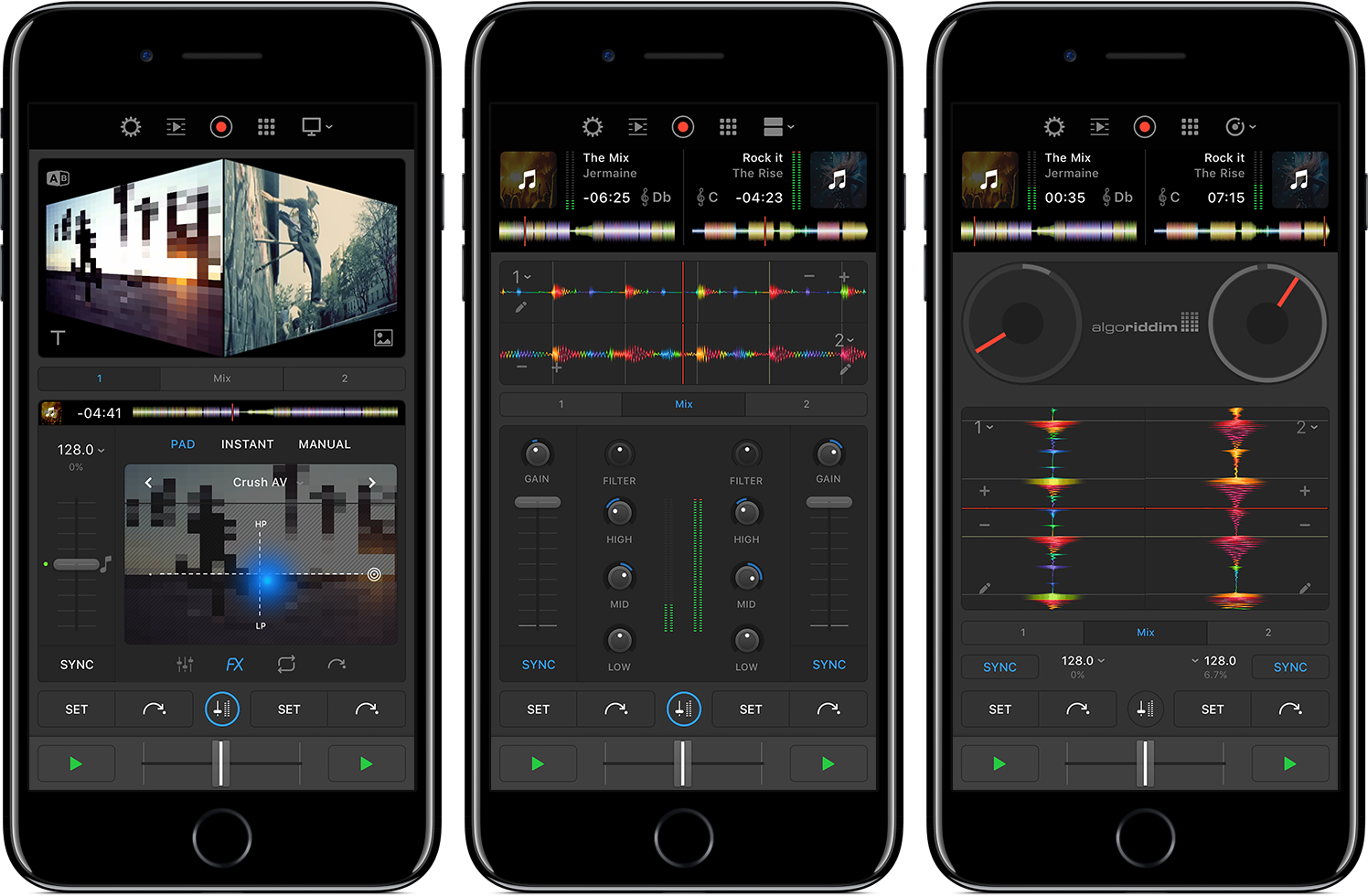 Again, it’s rare that such a complex, feature-rich app would implement VoiceOver and other Accessibility technologies so well that a blind DJ was able to use it without a hiccup.

djay Pro for iPhone implements many Accessibility technologies, from VoiceOver feedback to visual cues like beat markers and bars that use haptic feedback to let visually impaired users perceive the information as if they were seeing the visual waveform of the audio.

VoiceOver support, of course, lets vision impaired users tap a button or slider in the app to hear a description of what it does, its state and how to operate it through their headphones—independent of the mix that is playing through the main speakers.

The app is compatible with all iPhone models from iPhone 5 onward and requires iOS 10 or later. Pre-bundled content includes videos, Loopmasters content and samples by DJQbert, with 30+ audio effects from Sugar Bytes available via In-App Purchase.

djay Pro for iPad is $9.99 on the App Store, a fifty percent discount for a limited time.