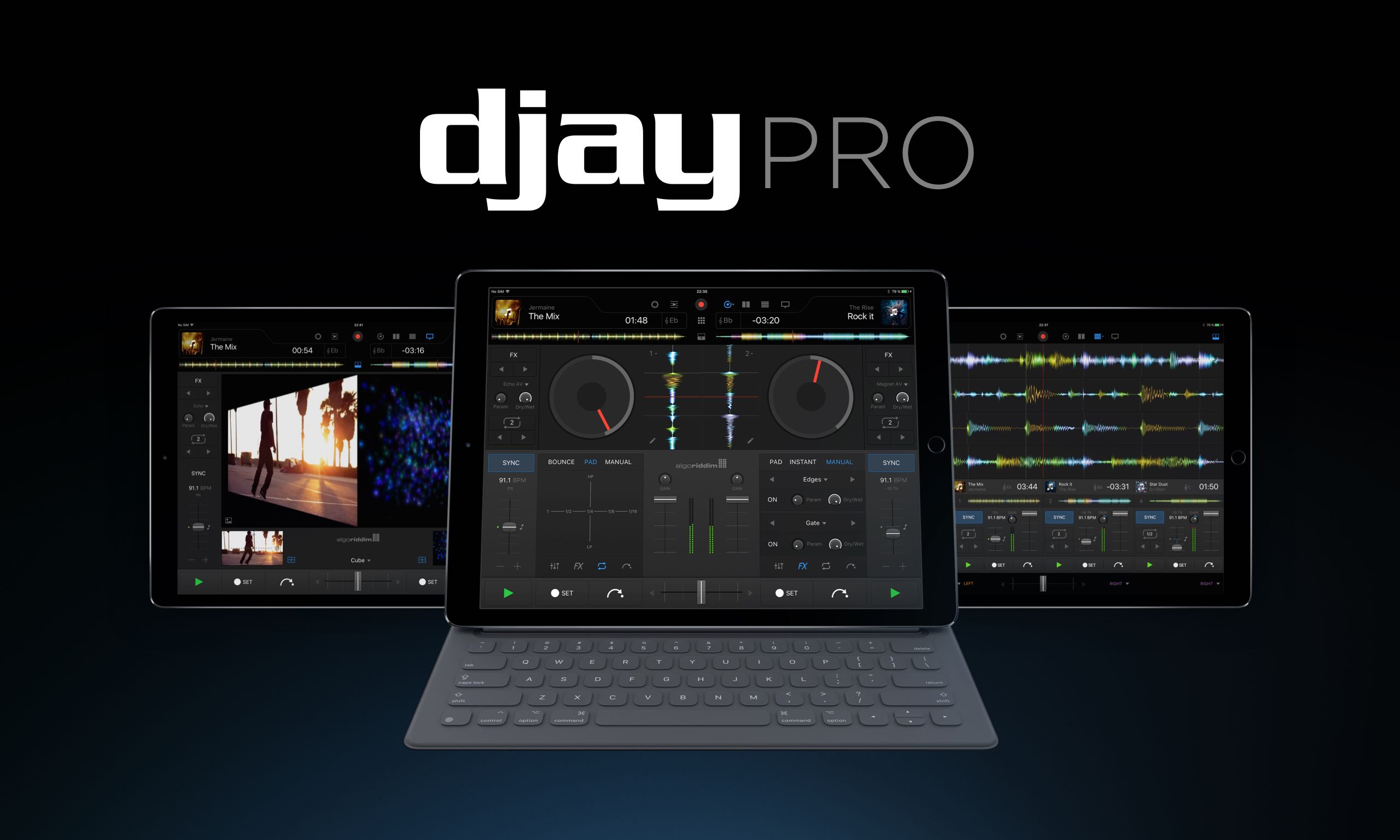 The iPad Pro has just received what could be described as a killer app in the form of German developer Algoriddim’s djay Pro, a brand new iPad-exclusive apps for both pro and aspiring DJs which launched this morning in the App Store.

Joining Algoriddim’s existing djay Pro for Mac, djay 2 for iPhone and djay 2 for iPad apps, djay Pro for iPad replicates the productivity of its Mac counterpart with extensive support for more than 70 keyboard shortcuts and iOS 9’s Split View and Slide Over multitasking modes.

More importantly, the software takes full advantage of the iPad Pro’s A9X chip to deliver pristine sound quality, desktop-class performance and features like high-definition waveforms, four decks, and video mixing with 4K support—all in real-time and without ever skipping a beat.

”Every element, from the A9X chip plus the graphics processor to the Smart Keyboard, has enabled us to introduce unprecedented pro level features that combine the best of touch with tactile control. djay Pro gives performing DJs and visual artists endless flexibility to take their sets to new heights.”

Check out the promotional video included below and then read about all the great features that make djay Pro the best iOS release yet. 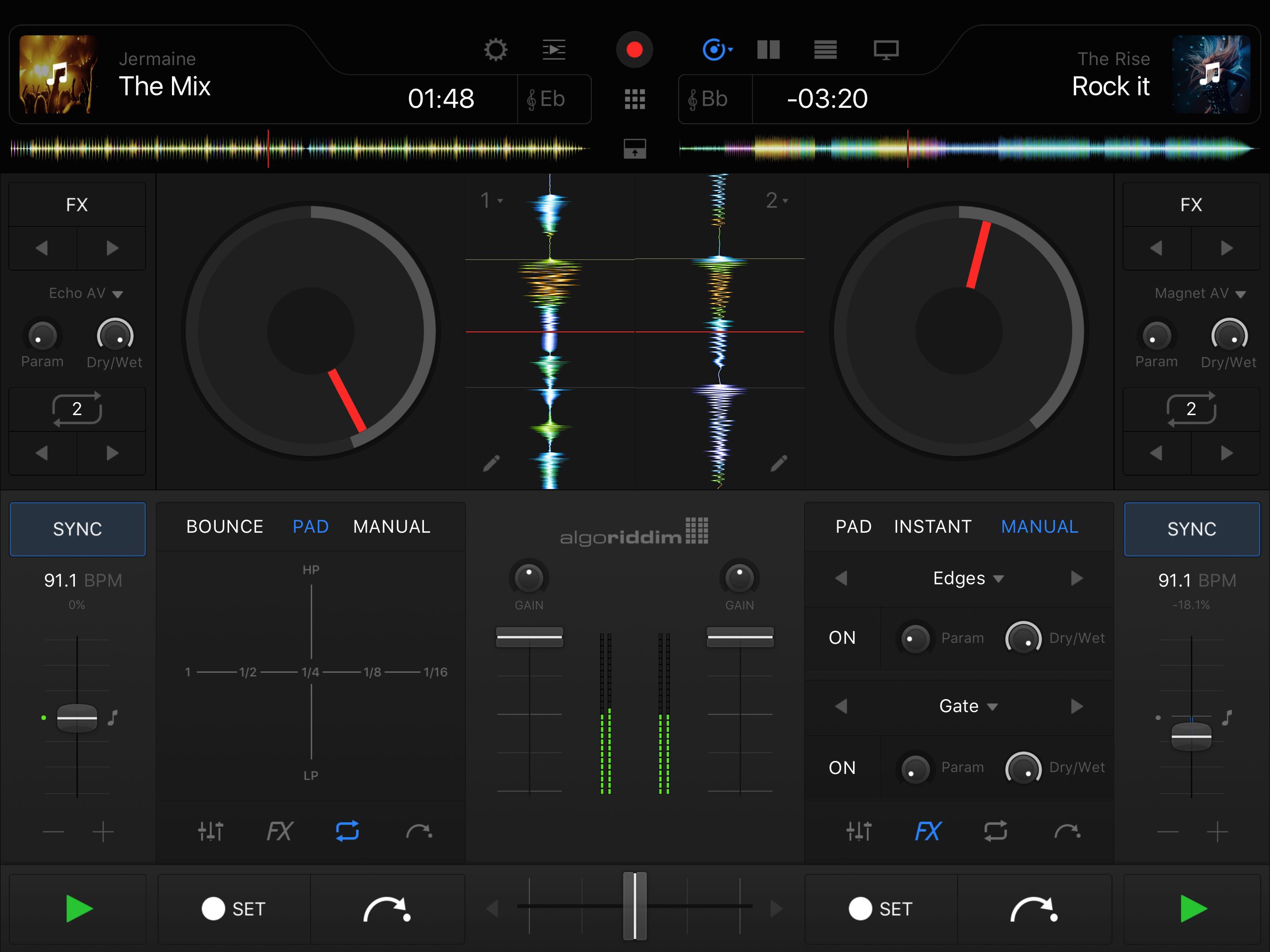 In taking the best of both worlds, desktop and iPad, and with extensive support for keyboard shortcuts, djay Pro speeds up music creation.

And by combining touch and keyboard entry, you can apply complex effects and mix your music faster than before. Thanks to the iPad Pro’s screen real estate, djay Pro lets you hide and show panels so you can personalize the user interface to your liking. 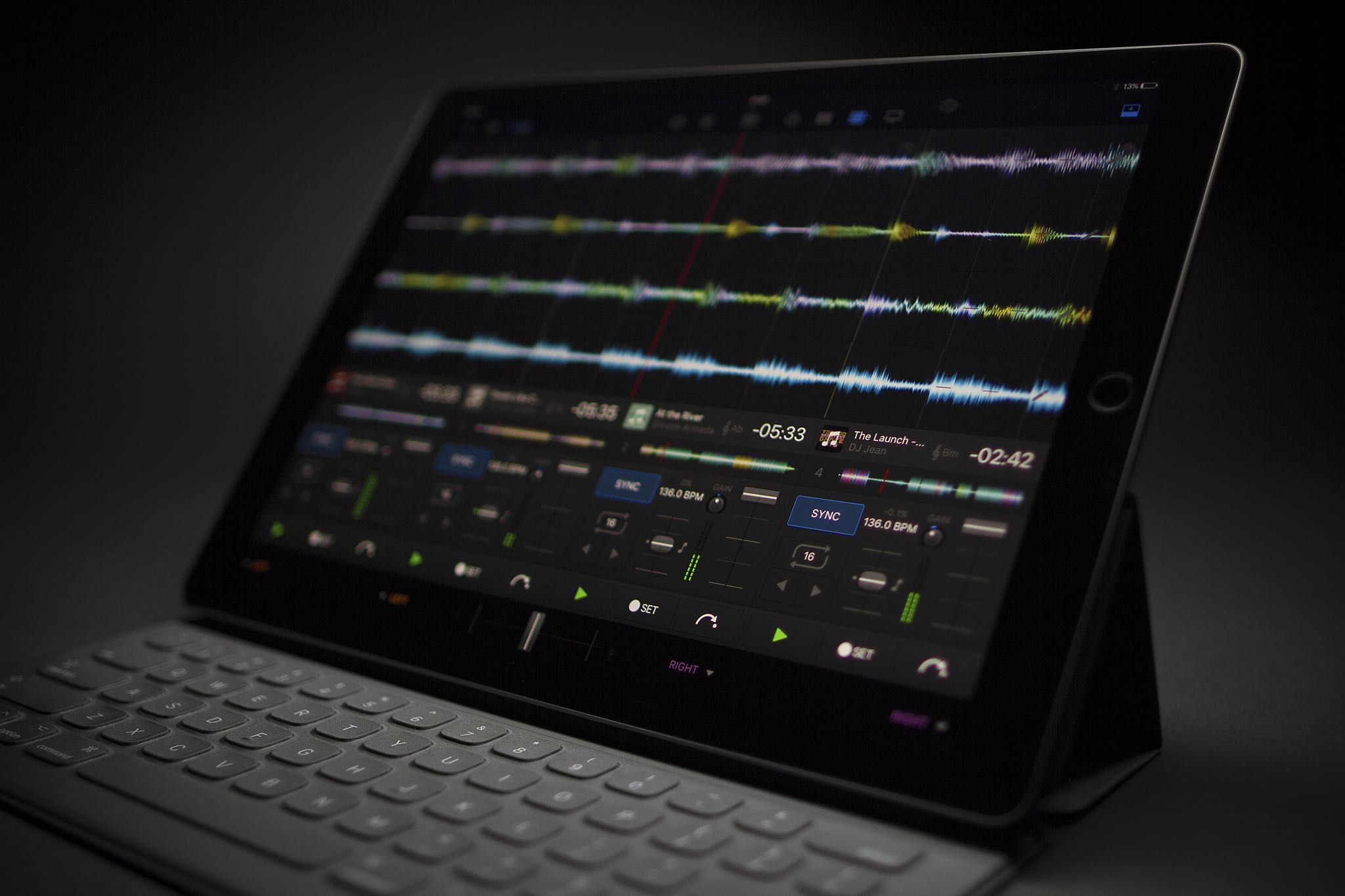 With iOS 9’s new multitasking modes, djay Pro really feels like a desktop-class app on the iPad Pro. With Slide Over, you can bring up djay Pro in a side panel while you surf the web, read your email and interact with your favorite apps. This enhances your workflow as you can take notes about a track list or write down song requests on­ the fly.

What’s especially interesting is that djay Pro in Slide Over can be used as a background audio player for your Spotify tracks. And in Split View mode, djay Pro can run side by side with other apps on your system. 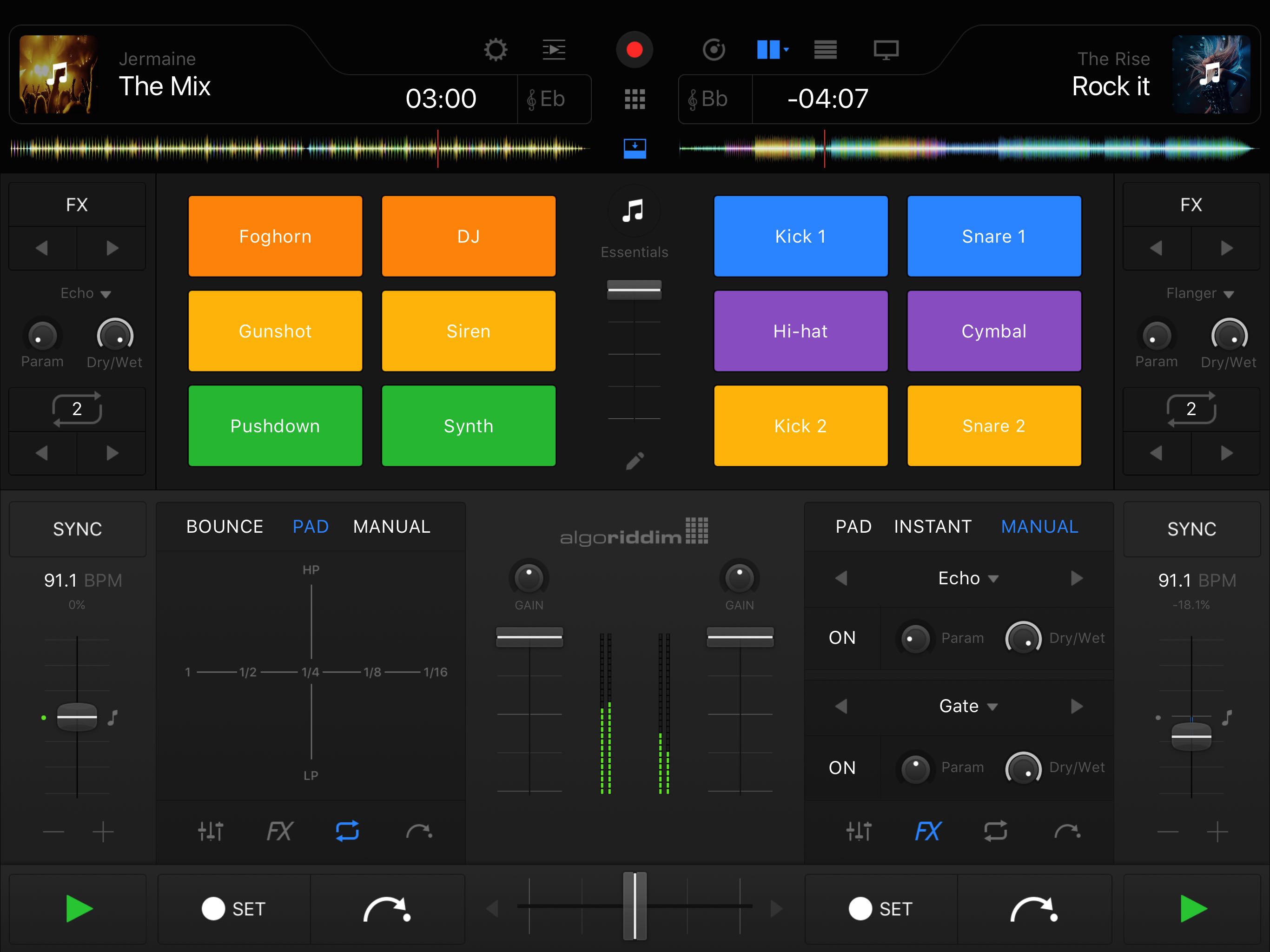 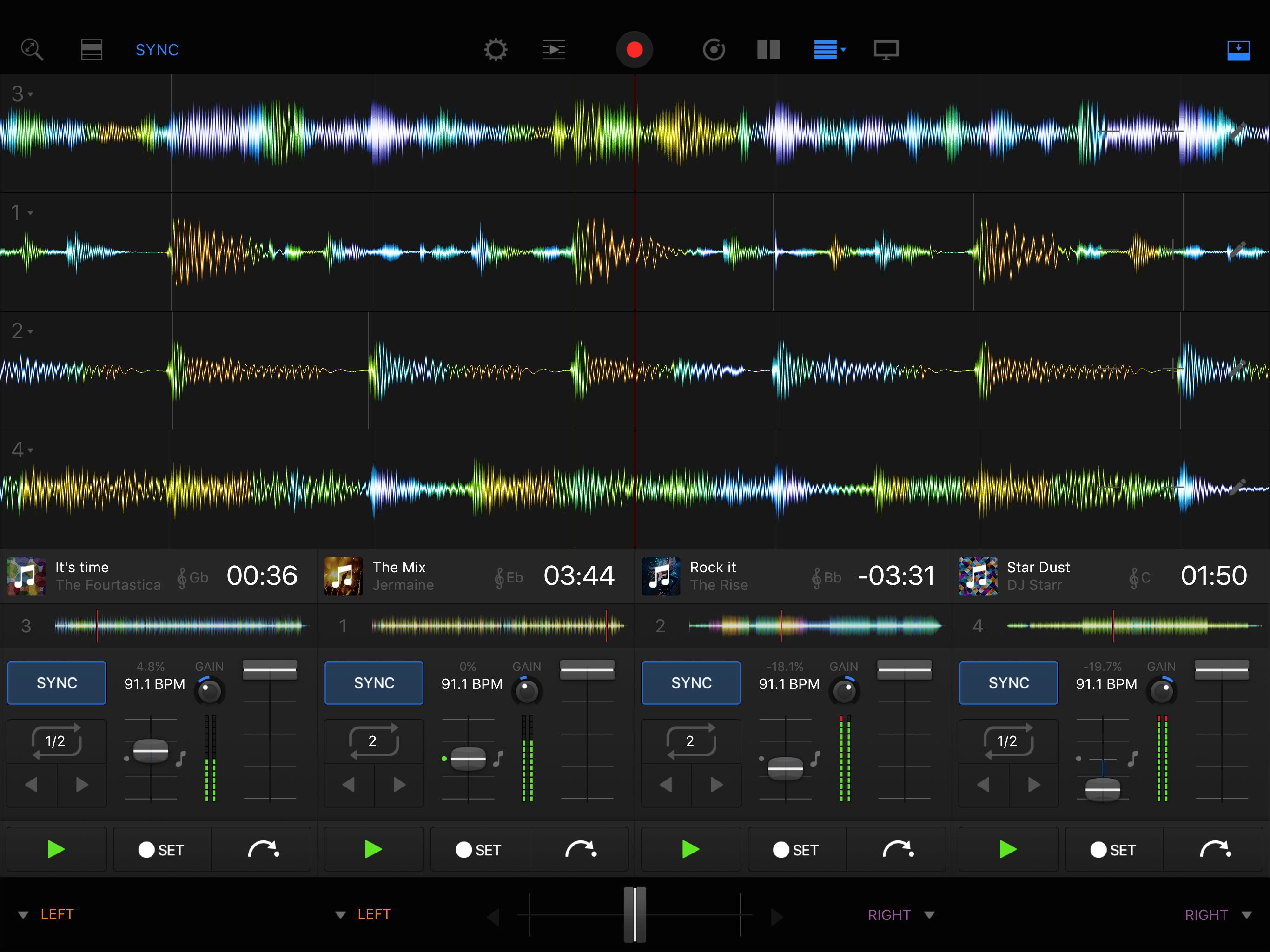 But more importantly, the app now includes a four-deck view mode that lets you play, mix, slice and synchronize up to four tracks simultaneously—in real-time, of course.

djay Pro lets you mix music from a variety of sources, including iTunes, Spotify, local music and video tracks, as well as files stored in iCloud Drive or Dropbox, combining them into a single, easily searchable library. 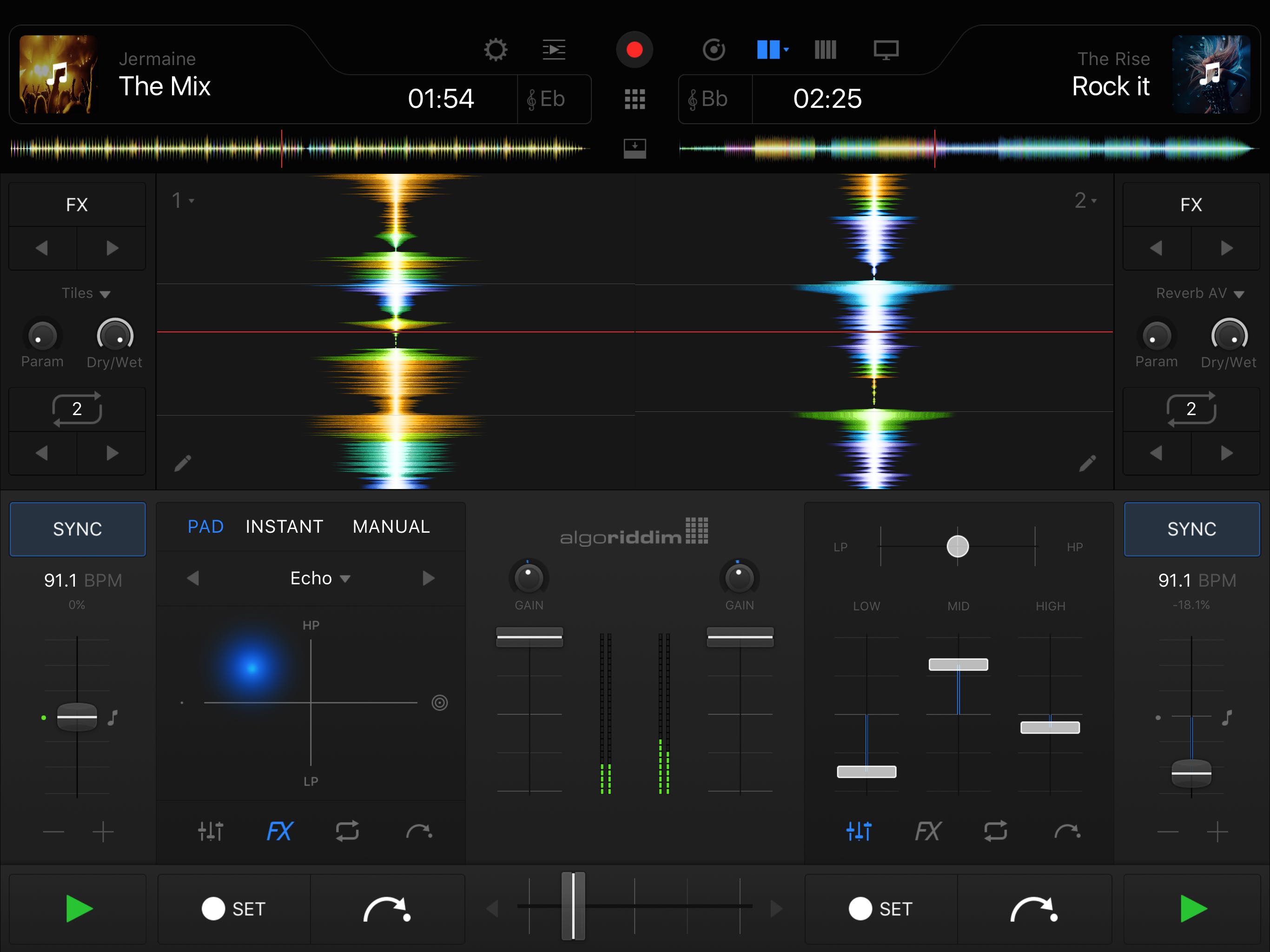 You also get a song recommendation engine powered by The Echo Nest which suggests tracks that go well with what the DJ is currently playing based on danceability, BPM, key, music style, and how well the song mixes with the currently playing track.

Truly leveraging the capabilities of the iPad Pro, the app introduces a new video mode. In a Skype demonstration a week ago, Algoriddim impressed me with video visualizers and mixing features that work with multiple videos streams in real time. 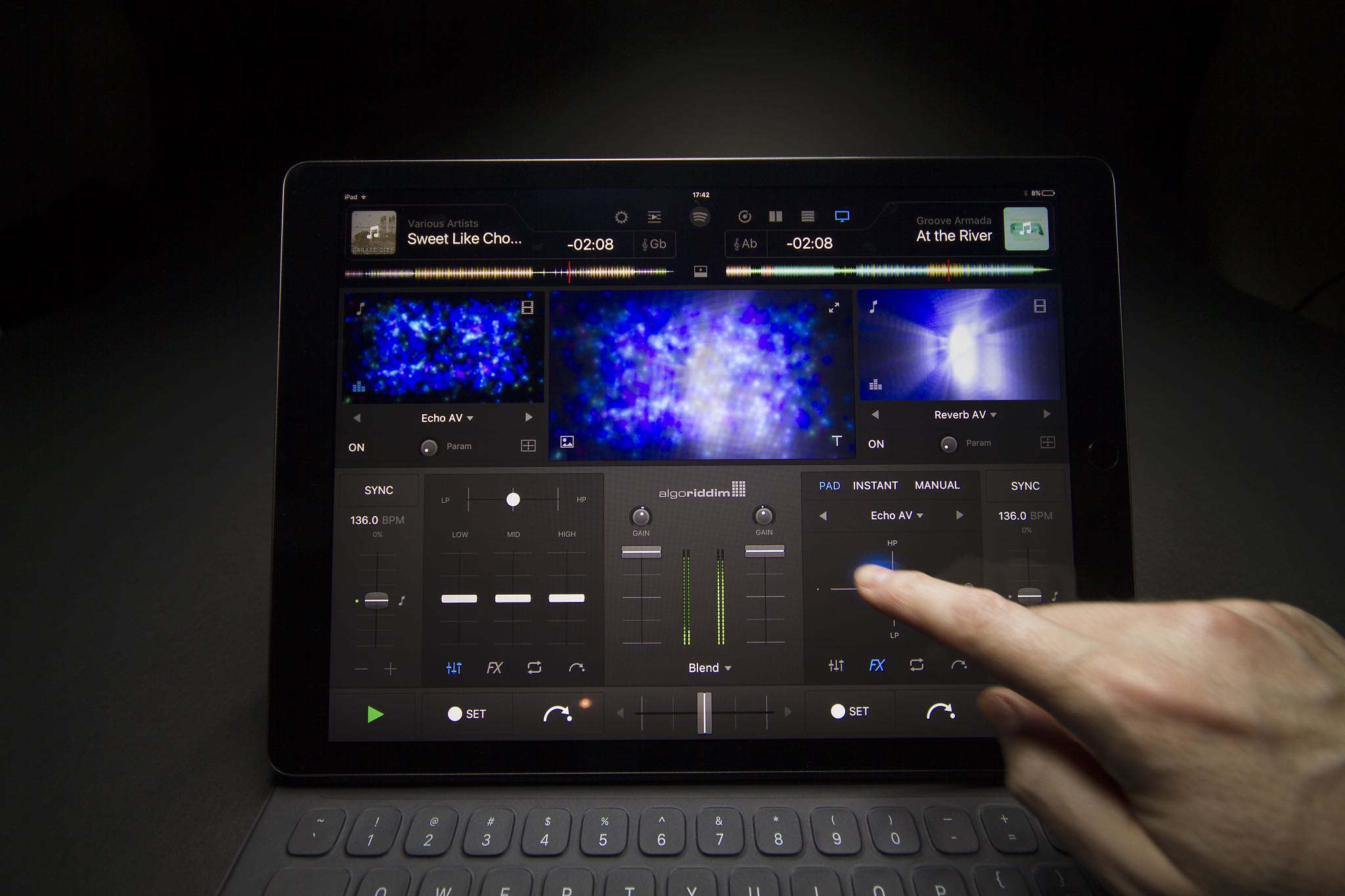 Even better, djay Pro supports two simultaneous 4K video streams with beautiful transitions, a bunch of visual effects and handy features like title and image overlays, all delivered in sixty frames per second. Some of these are available as In-App Purchases though the app comes bundled with extensive video content (or, you can shoot your own clips via your iPad’s camera and combine them with music). 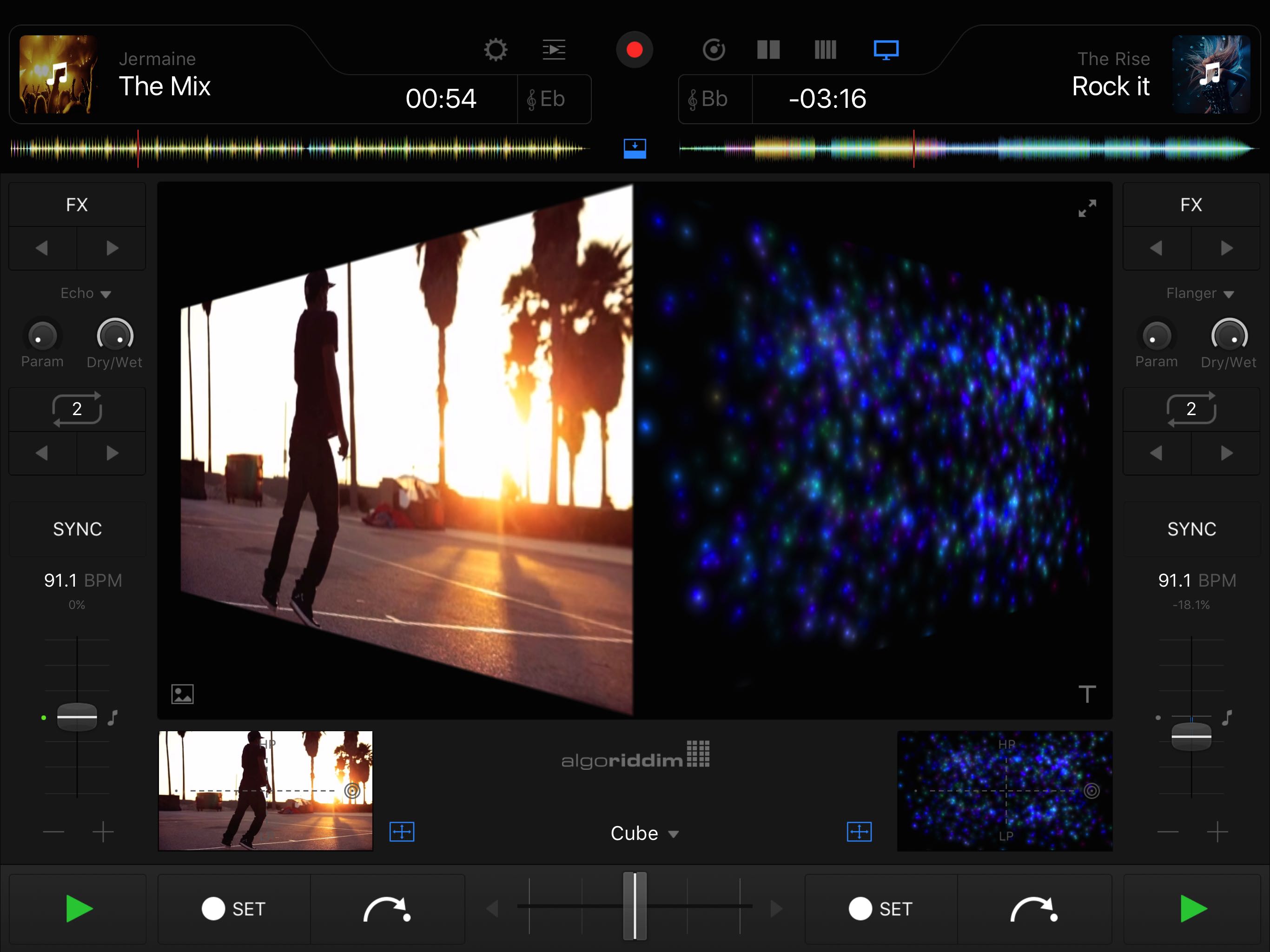 The 1080p video output can be saved as a high-quality movie recording in real­time, displayed on an external monitor through HDMI or streamed wirelessly over AirPlay to external displays through the Apple TV.

The list of major features in djay Pro includes the following items:

For those who want to take their DJing to the next level, the app provides more than thirty optional audio effects by Sugar Bytes via the In-­App Purchase mechanism. 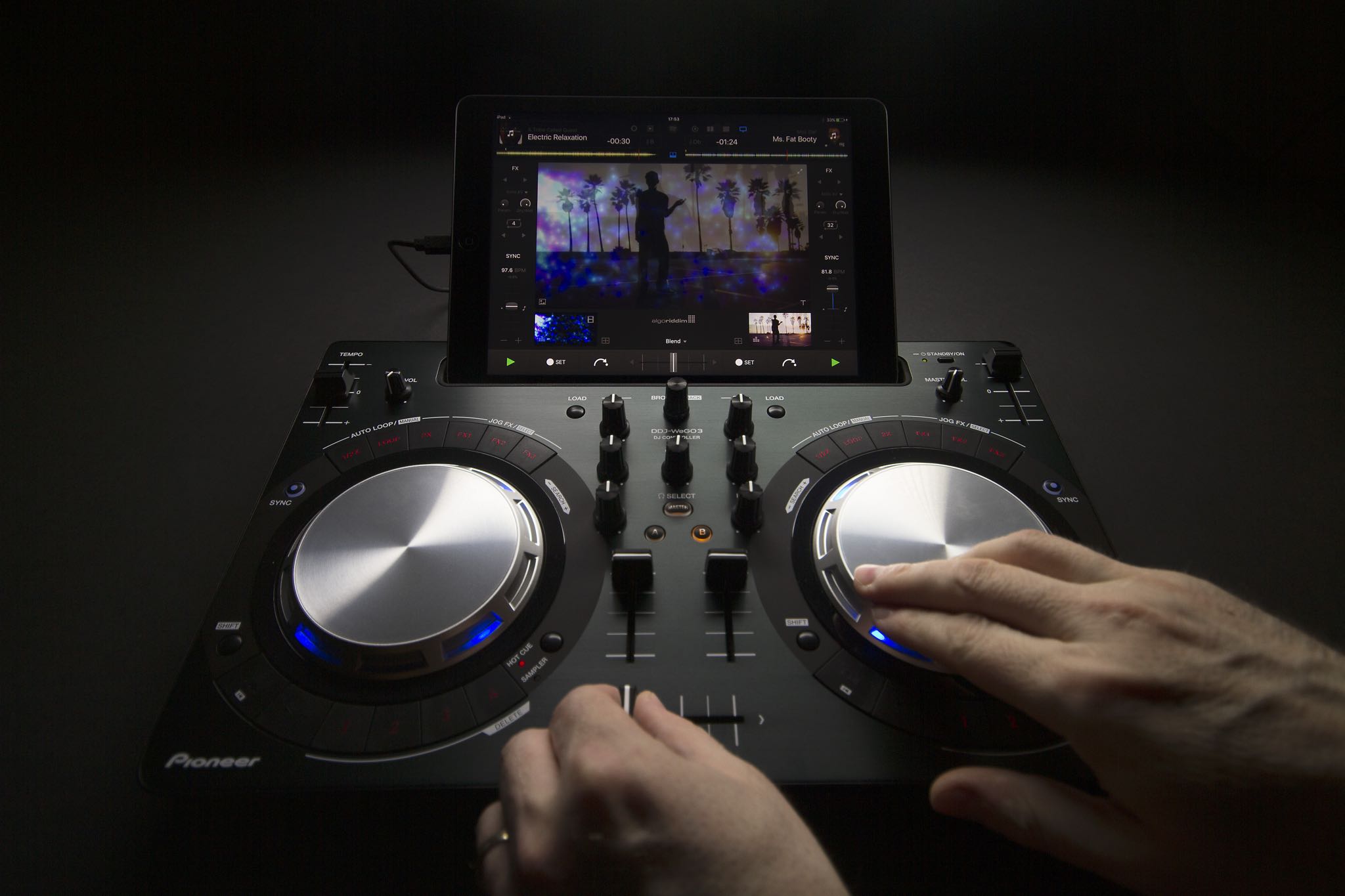 Akin to other djay apps by Algoriddim, djay Pro features native integration with professional DJ hardware such as the Pioneer DJ, Numark, Reloop and other controllers.

And lastly, your Cue Points, beat grid edits, metadata and FX purchases from iOS and Mac versions of djay will automatically sync over iCloud to djay Pro. An Apple Design Award winner, djay apps for iOS devices have been downloaded more than twenty million times on the App Store.

djay Pro requires an iPad with iOS 8.0 or later. The app is optimized to take advantage of the iPad Pro’s powerful hardware and is localized in English, French, German, Italian, Japanese, Simplified Chinese and Spanish.

A Spotify Premium subscription is required to access the Spotify music catalog through djay apps. A 30-day free trial of Spotify Premium is available to all djay users at algoriddim.com/spotify.

To celebrate the launch, Algoriddim is taking thirty percent off djay Pro’s price, valid for a limited time only.

djay 2 for iPhone and Apple Watch is available at no charge.