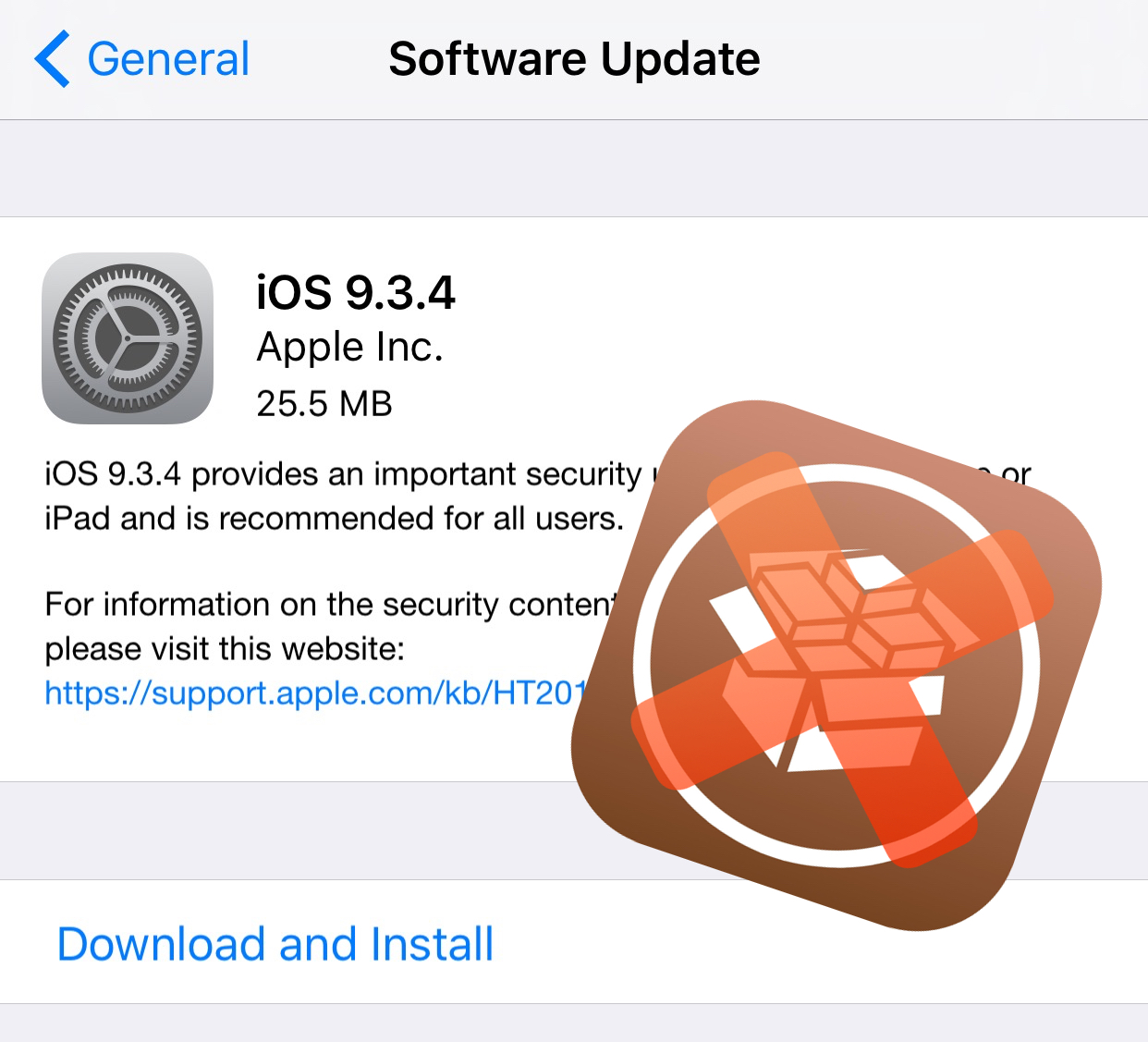 Apple has released iOS 9.3.4 on Thursday with “important improvements to the security” of iOS.

On the other hand, we understand iOS 9.3.4 actually just kills the semi-untethered jailbreak for iOS 9.3.3. As a result, it’s highly recommended that you get your devices to iOS 9.3.3 and jailbroken if you value having a jailbreak at all.

Apple is clear in what security enhancements were included in iOS 9.3.4 in a security document. The timing of the release falls inline with the recent iOS 9.3.3 semi-untethered jailbreak from Pangu, and with that in mind, it comes off as no surprise that it closes the jailbreak.

Well-known iOS developer and hacker Luca Todesco notes that the “fix” for the iOS 9.3.3 jailbreak has already been implemented in iOS 10’s betas and that it took a while for iOS 9.3.4 to be released to finally address the jailbreak:

If you’re not already jailbroken on iOS 9.3.3, and you’ve been contemplating it, now is your chance to upgrade to iOS 9.3.3 and jailbreak with the Pangu jailbreak tool and install the 1-year certificate that will last you until April of 2017. If you aren’t jailbroken yet and you wait too much longer, Apple will stop signing iOS 9.3.3, and you’ll be stuck with what you have or updating to iOS 9.3.4 without a jailbreak.

Apple typically stops signing firmware 1-2 weeks following a new iOS release, so you probably still have a few days before Apple closes the signing window for iOS 9.3.3, but nevertheless, when Apple is on a mission to kill the jailbreak, you never know and you’re better safe than sorry.

With that being said, if you have any intent of jailbreaking, you should get your device on iOS 9.3.3 as soon as possible. iOS 9.3.3 is available on our downloads page, as is the latest version of Cydia Impactor and the Pangu 1.1 IPA file for iOS.

It’s unlikely we’ll see another jailbreak until after the public release of iOS 10, so as a final warning, if you want a jailbreak on iOS 9.3.3, get your devices there and jailbreak them now.

Jailbreaking is a cat-and-mouse game between Apple who wants to have the highest amount of security and the hackers who want to provide an open experience of iOS for users. Apple always gets to patching the jailbreaks eventually, so we have to remain on our toes every time a jailbreak is released.

With iOS 9.3.4 now out, and iOS 9.3.3 being the latest jailbreakable firmware, we highly recommend getting your devices to iOS 9.3.3 and jailbroken as soon as possible.

With the pressure now on, will you jailbreak iOS 9.3.3, or will you forever hold your peace (until next time)? Share below!