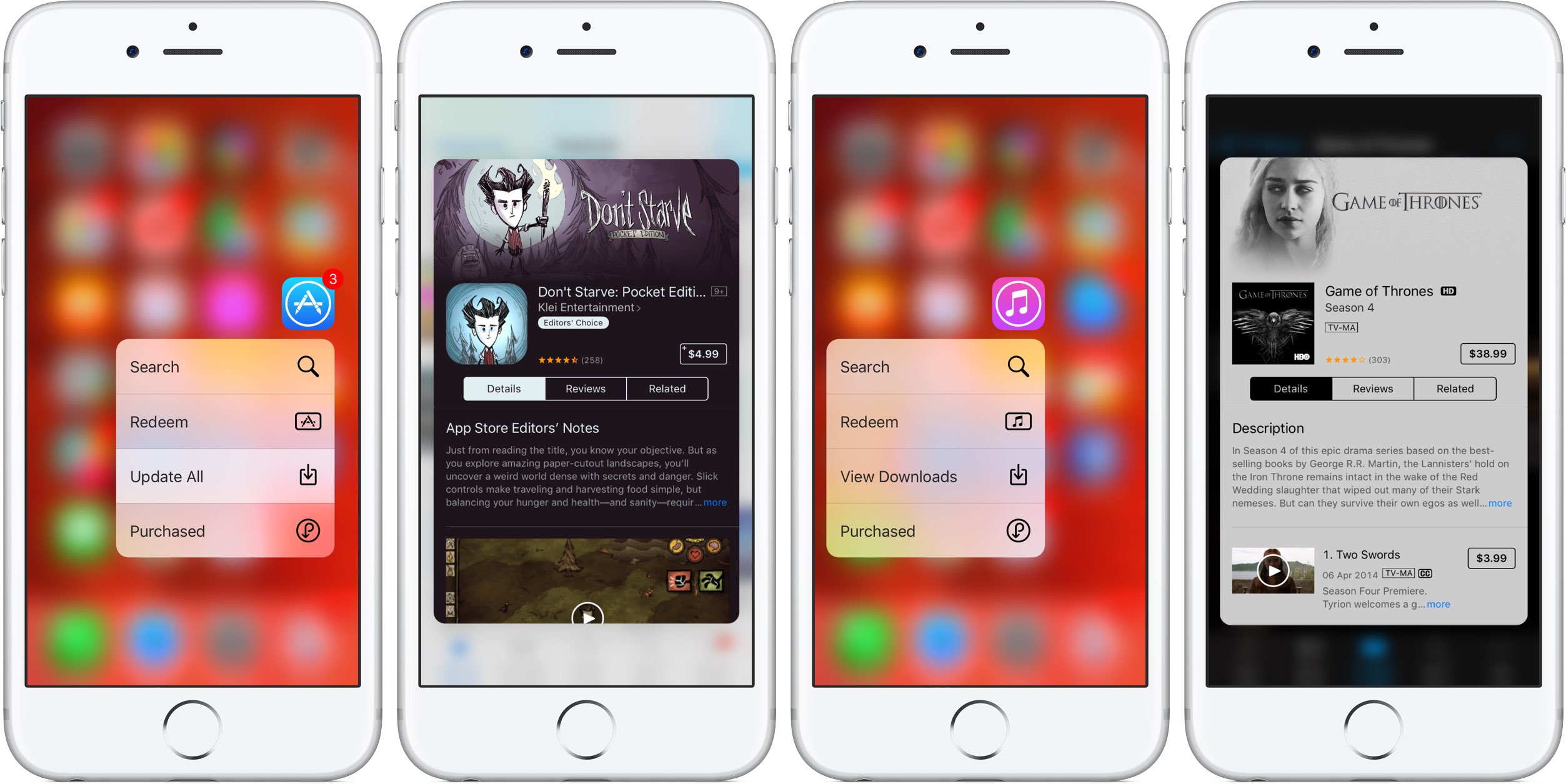 The App Store and iTunes Store storefronts are 3D Touch-enabled on the iPhone 6s and iPhone 6s Plus, with each supporting some pretty smartly chosen Home screen shortcuts that’ll save you a few taps once you get the hang of them.

On the other hand, previewing your apps and media via force-pressing isn’t as developed as in other stock apps, such as Messages and Maps. But don’t you worry—iDownloadBlog comes to the rescue!

This quick tutorial clearly demonstrates where on the App Store and iTunes Store common 3D Touch shortcuts and Peek and Pop gestures do and don’t work.

Redeem, search and more, right from the Home screen 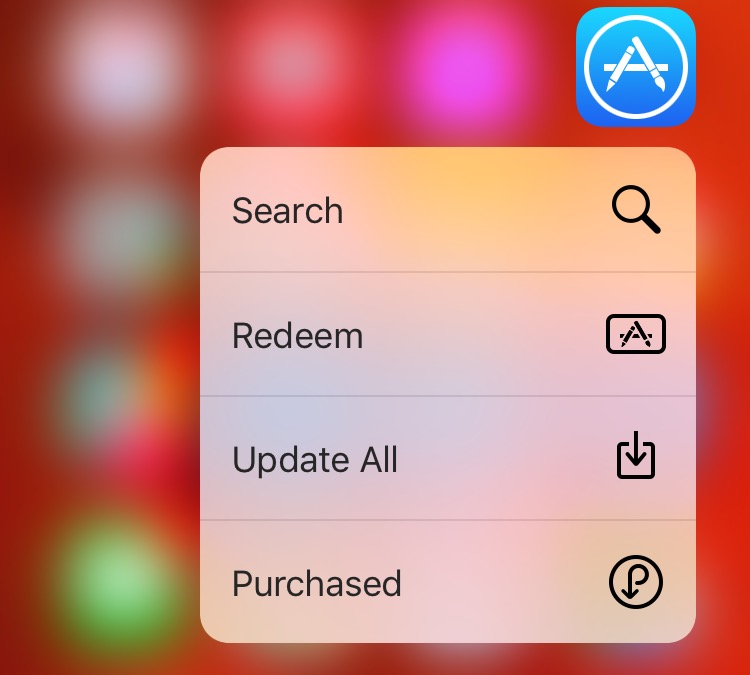 The Redeem shortcut is a great time-saver for those of you who use redeemable iTunes codes: you’ll save yourself a few taps with that shortcut versus needing to open the App Store or iTunes Store, and then scroll to the bottom to tap the Redeem option (quick tip: you can ask Siri to “Redeem an iTunes Store gift card”). 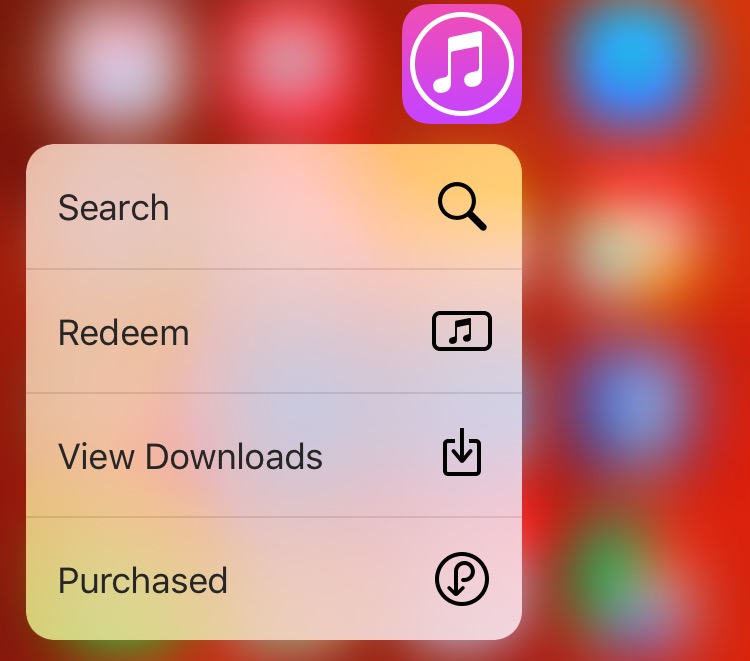 The App Store’s Update All shortcut instantly downloads app updates. And lastly, selecting Purchased on the Home screen lets you browse your previously purchased apps and media in one place, and re-download them instantly.

The App Store and iTunes Store support Peek and Pop, letting you launch handy previews simply by force-pressing on an item. On the App Store, for example, you can preview apps by pressing their icons, or press a little harder to land on their page. 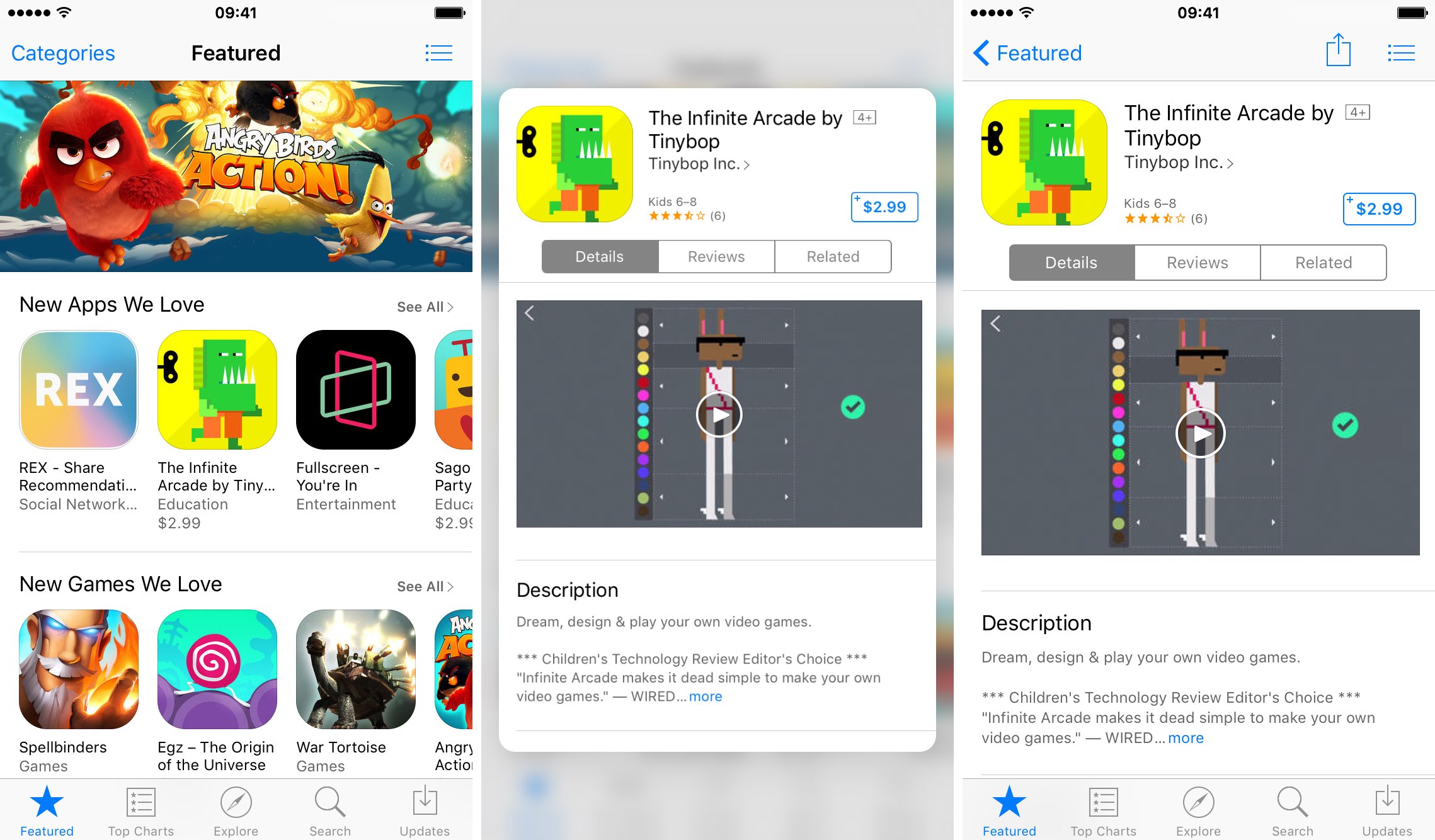 Within the iTunes Store, Peek and Pop are readily available for some but not all items. For instance, you cannot preview trailers with 3D Touch. 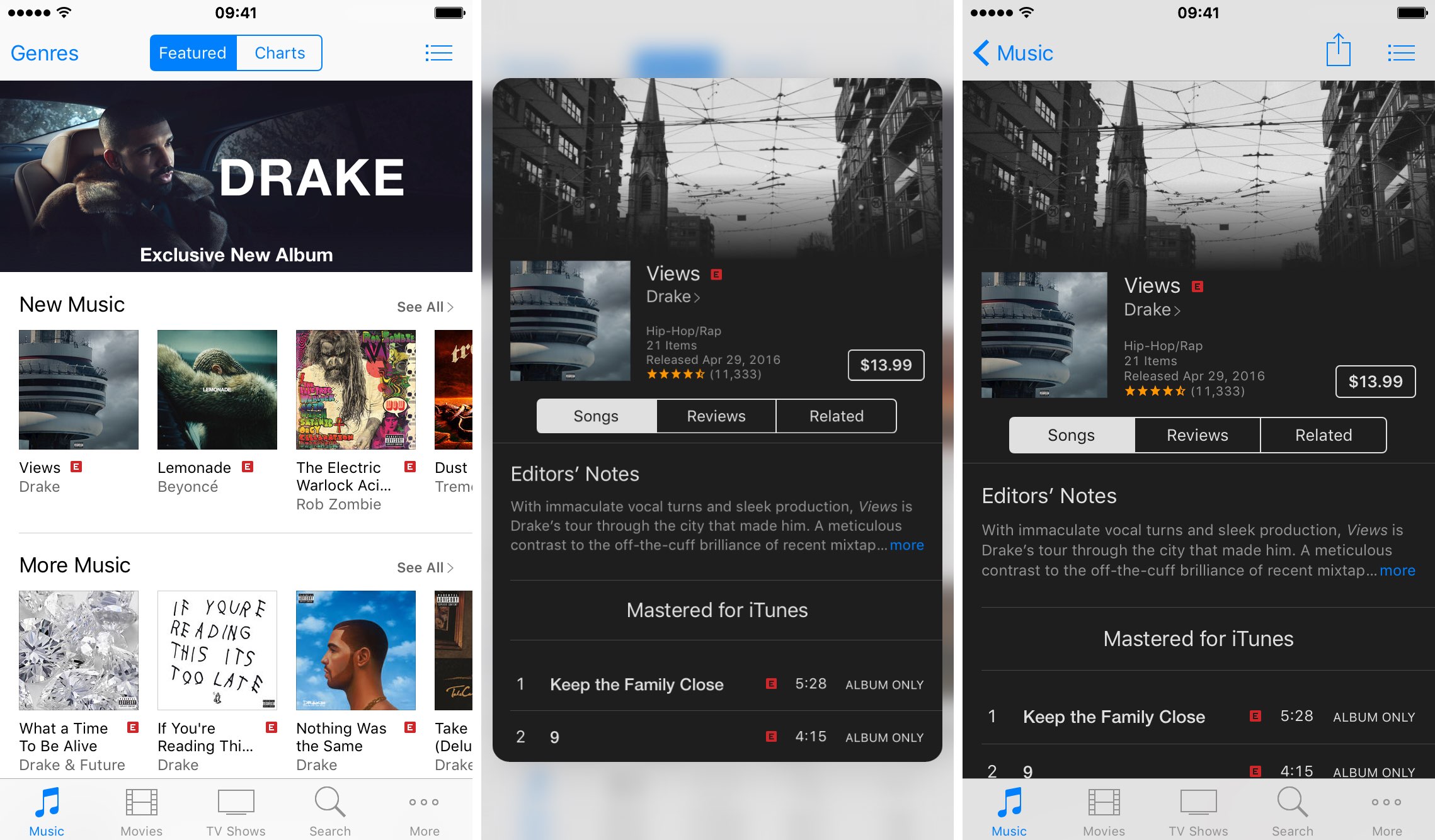 You can preview albums (but not songs) with 3D Touch on the iTunes Store. 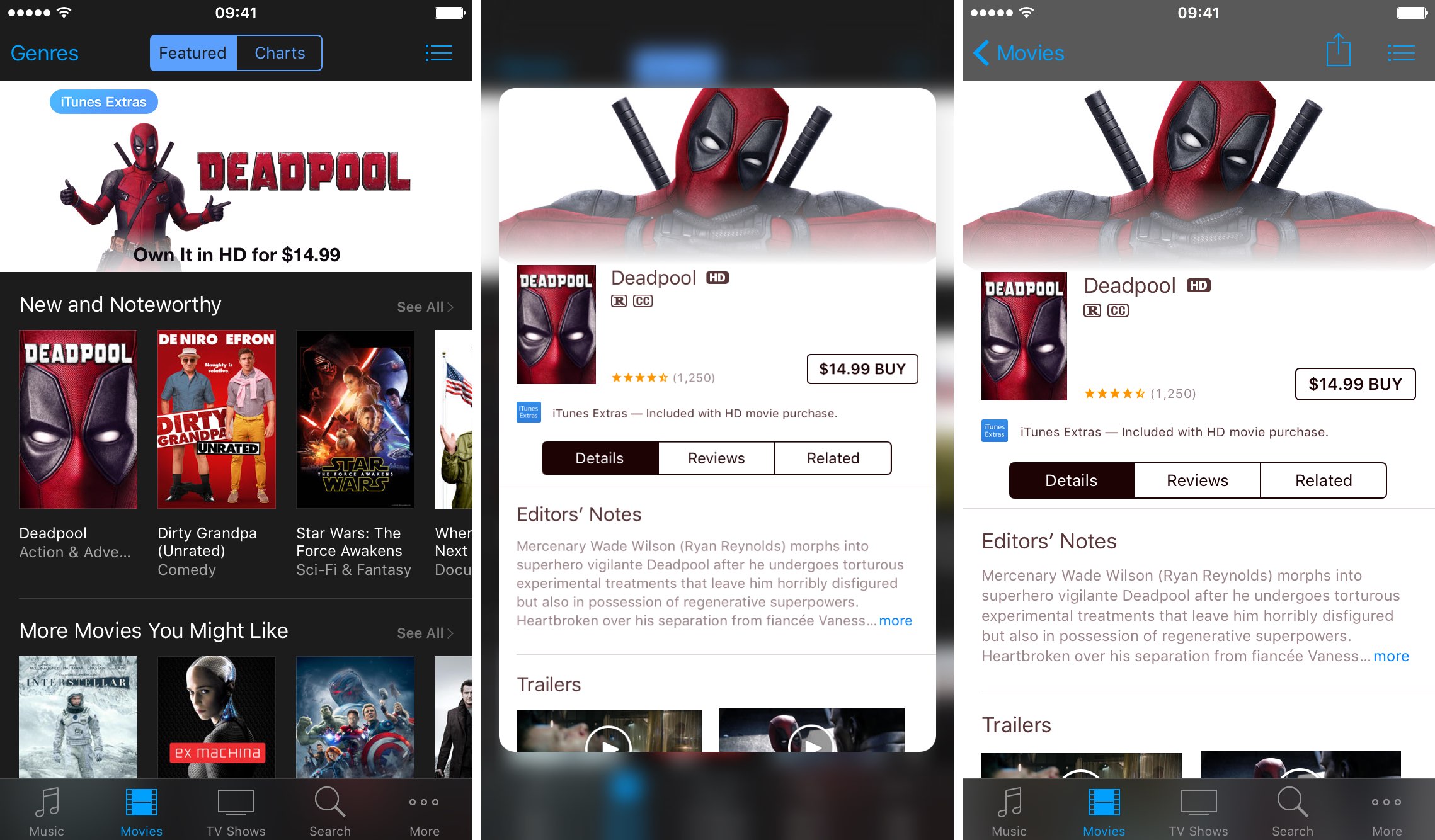 Peeking at movies on the iTunes Store brings up incomplete previews. 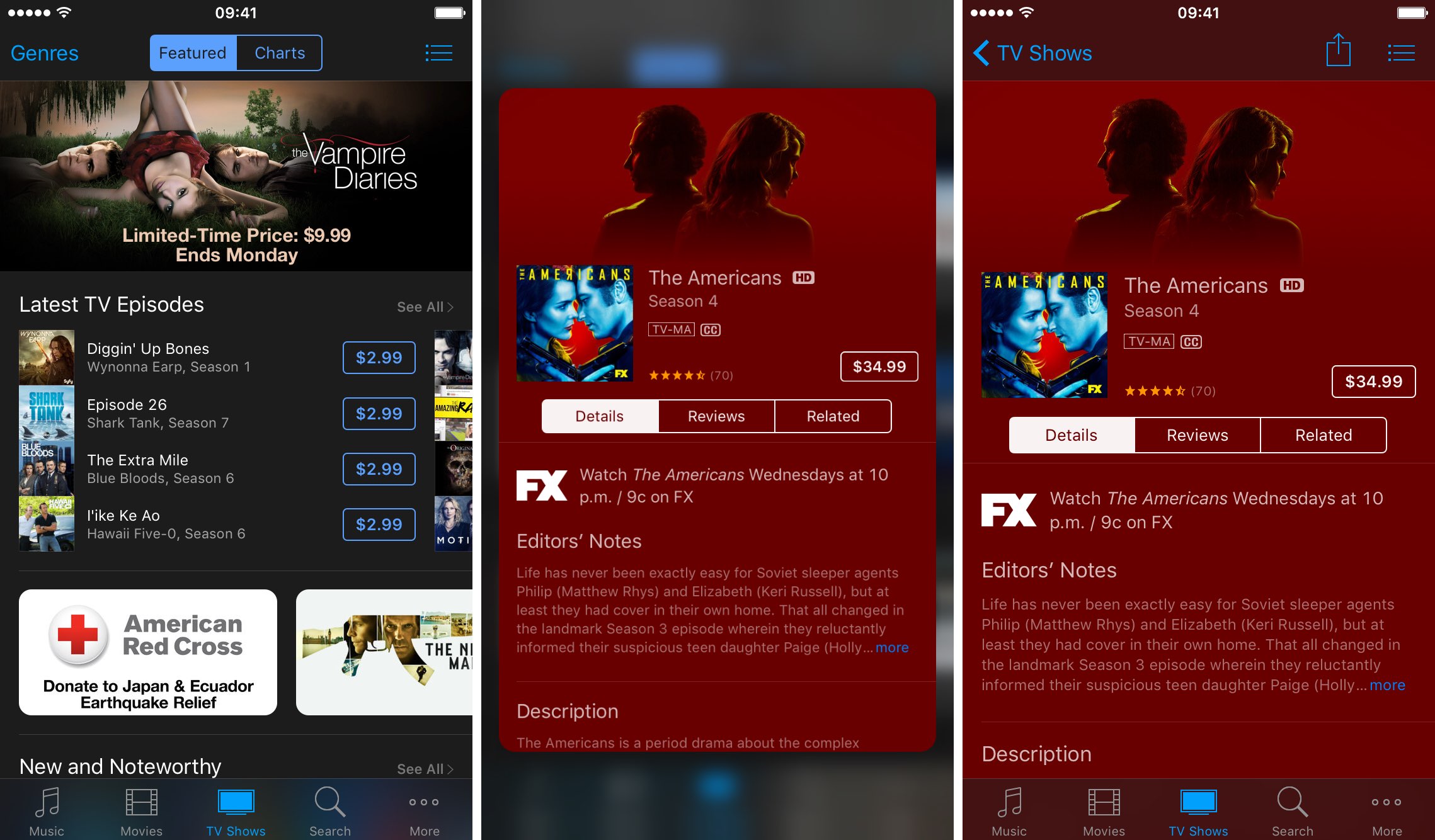 You can peek at show seasons with 3D Touch, but not at individual episodes.

As mentioned, even though 3D Touch features available for the App Store and iTunes Store will save you a few taps, their true potential hasn’t been fully realized. For example, nowhere in these apps can you swipe up whilst peeking at an item to show hidden options like Copy, Share or Add to Wish List.

On the App Store, Peek and Pop are unavailable for apps in search results and you cannot peek at app screenshots or preview pending updates. Likewise, 3D Touch previews are unavailable for apps featured on the rotating carousel at the top of the App Store, for banners which promote app collections and for cross-promoted content like Apple Music subscriptions, iTunes Store content and more.

In that regard, the iTunes Store is even worse than the App Store. Let me just give you one example: although Peek and Pop work for many media items, not each and every content type found on the iTunes Store supports 3D Touch previews.

Things you cannot preview with 3D Touch on the iTunes Store include:

If you’re asking yourself why on Earth previewing albums with 3D Touch works, but peeking at individual songs does not, you should talk to Apple, really. 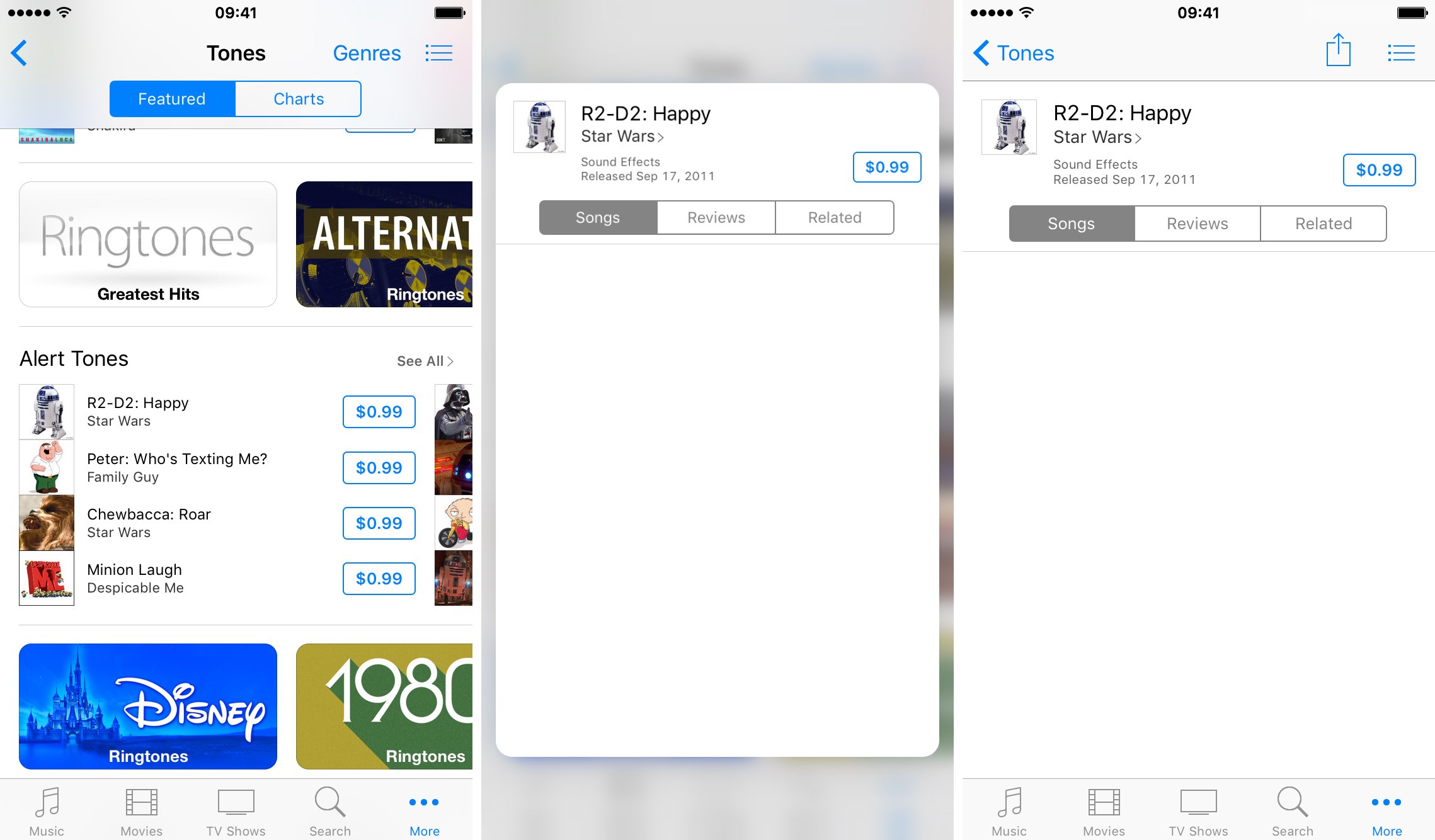 3D Touch does not let you preview ringtones on the iTunes Store.
Oddly enough, previewing alert tones is supported.

And even though certain content types, such as iTunes U courses and alert tones, are peek-able with 3D touch, the actual implementation leaves a lot to be desired due to their virtually empty previews. 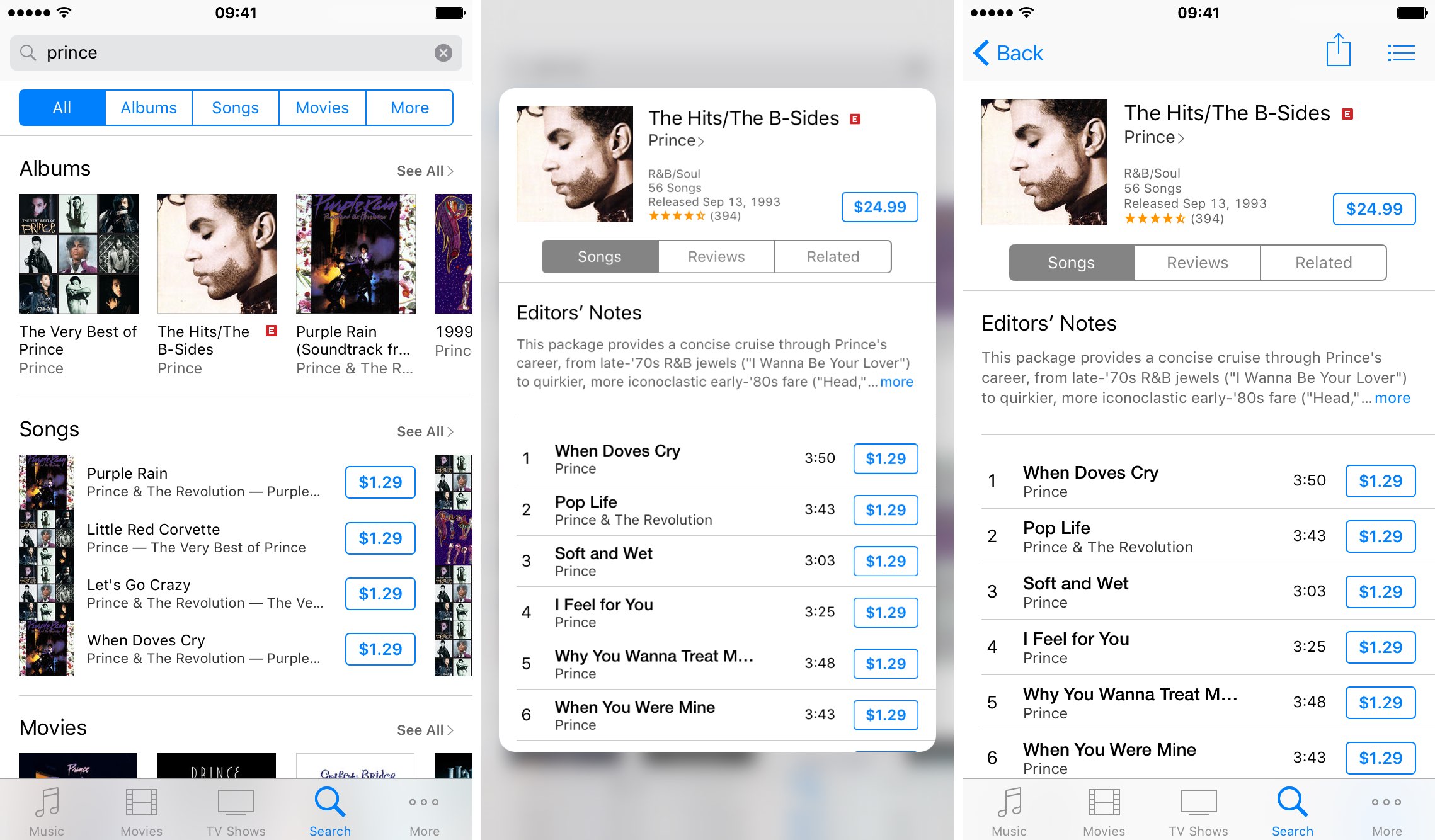 Peeking at an album is supported, but force-pressing a song does nothing.

3D Touch in other stock apps

If you’re interest in making the most from 3D Touch on your iPhone 6s or iPhone 6s Plus, please check out our selection of the following 3D Touch tutorials for stock apps: