One of the major features that shipped with iOS 9 was Markup, better known for the ability to draw on and annotate attachments of various file types that you receive in the Mail app and then send them back to the original sender, or someone else for that matter.

Markup is a feature included in iOS 9 and above that lets you draw and write all over certain types of attachments that you receive in the Mail app, such as image files and PDF files. It is particularly useful when you want to point out specific details in an attachment and emphasize one part of an image over another before you send it back to them for review.

Markup provides you with various tools to make pointing out specific qualities possible. These tools include but are not limited to:

When you receive an attachment in the Mail app, whether it’s a screenshot, a photograph taken with a camera, or a PDF file, you can access Markup. To do that, you will need to follow these steps:

Step 1: Open the email that contains the attachment and tap and hold on the image of PDF file in the email to reveal a share sheet. 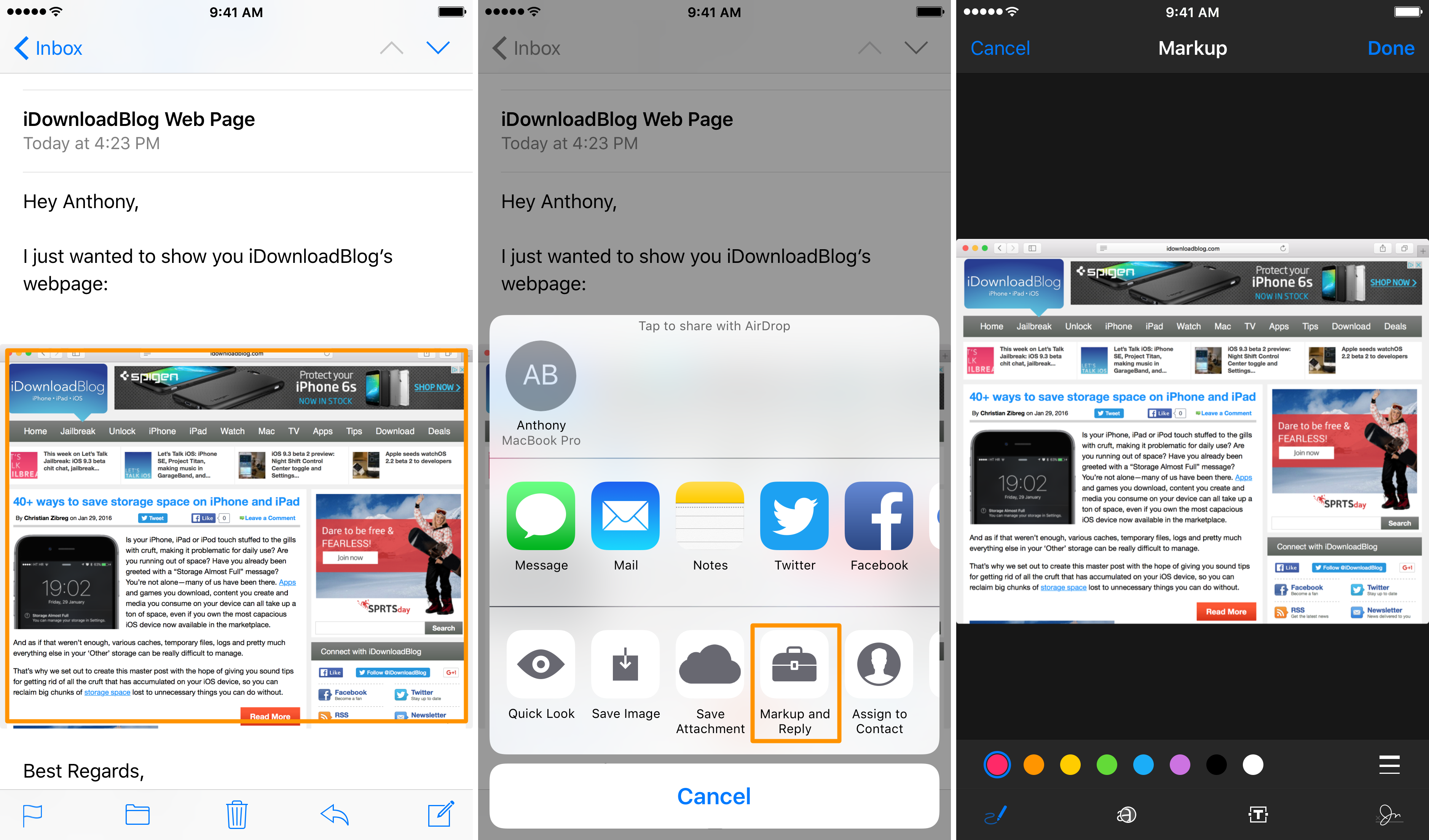 Step 2: Tap on the Markup and Reply button.

Step 3: The Markup interface, which is dark in color, will load, providing you with various editing tools.

Once the Markup interface is open, you’ll notice there are all kinds of editing tools available to you. Among the most simple of all the tools is the drawing and writing tool, which is the button at the bottom left of the interface that looks like a pencil and allows you to essentially tap and drag across any part of the image to draw. You can make shapes, draw lines, draw words, and more. 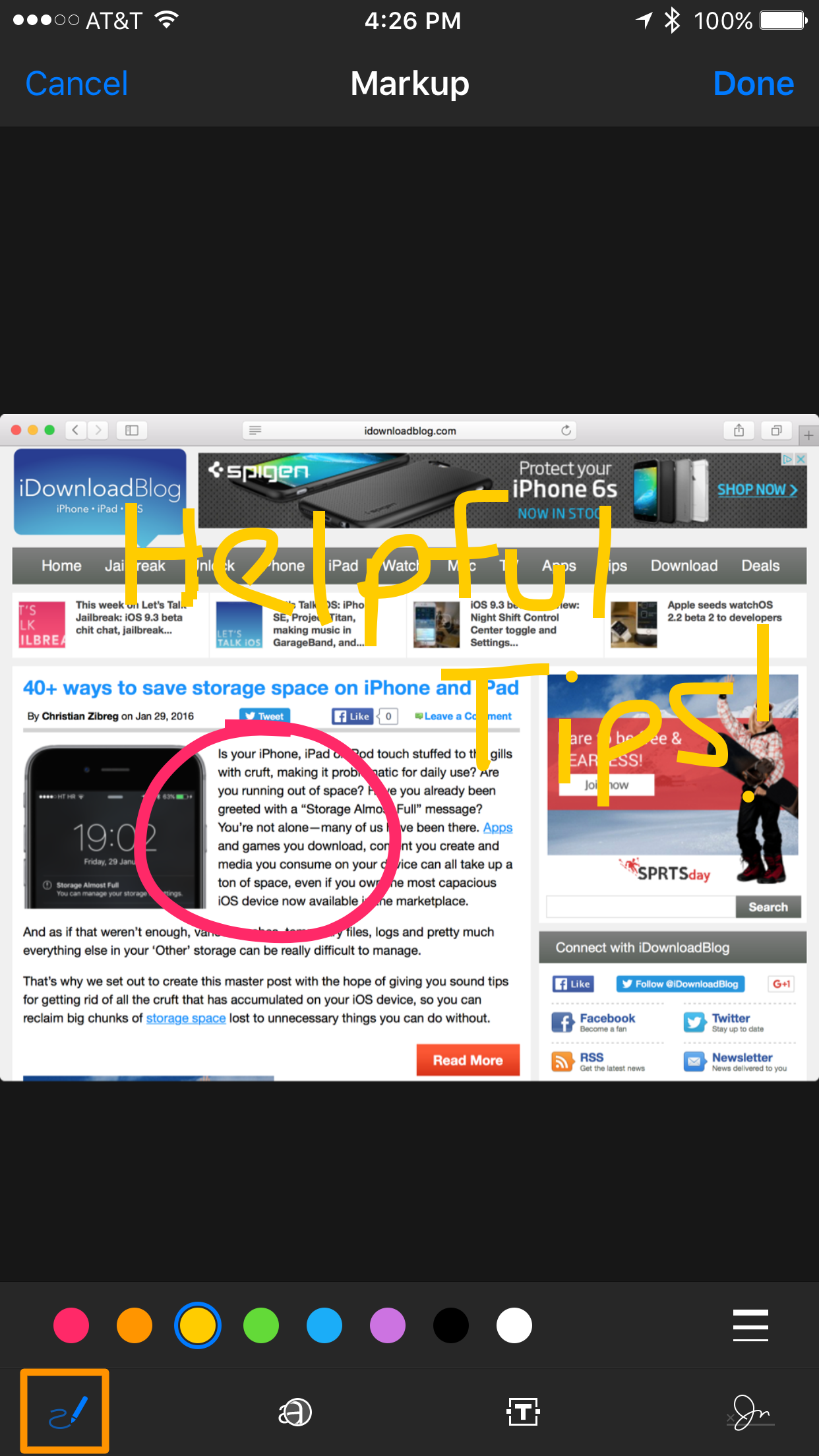 Among the visible tools you can access while drawing are changing the color and stroke size of the lines you draw. The stroke size is changed with the button to the right of the colors, and you can pick between three different stroke weights: heavy, normal, or light.

As for colors, you can pick from any of the following:

Another feature of the drawing functionality in Markup is that if you happen to draw a shape, such as an arrow or a box, iOS will automatically figure out that you’re trying to draw a shape and will suggest a shape to you. If this happens, you can tap on the shape, and iOS will intelligently insert it for you:

At times, you may want to emphasize a specific part of an attachment too. Whether it’s someone’s face, or a specific word, the zoom feature that Apple includes in Markup can be incredibly useful.

Zoom is accessed by the button to the right of the drawing button. When you tap on it, a magnifying glass is added to the image with two different dots surrounding it – a green one and a blue one: 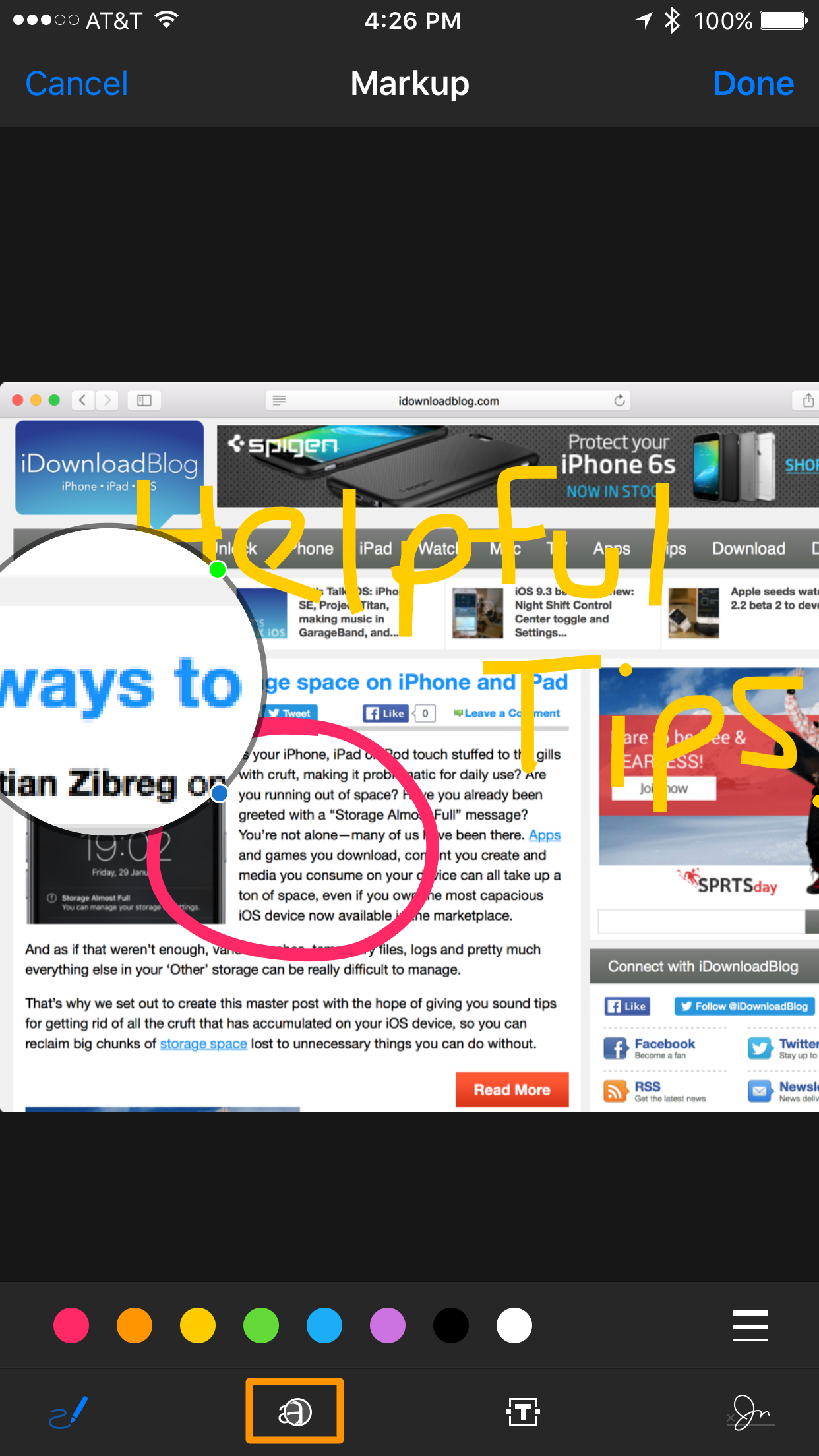 If drawing your words isn’t neat enough for you, and you want to leave commentary, then try using the text tool, which is the next button to the right at the bottom of the Markup interface after the zoom button with the letter “T” in it.

Tapping on the text tool button opens up a new text box; once this is showing, you can select the color you want to use for the text and then you can tap on the text formatting button to the right of the color picker to choose a font, select the text size, and choose the alignment for the text: 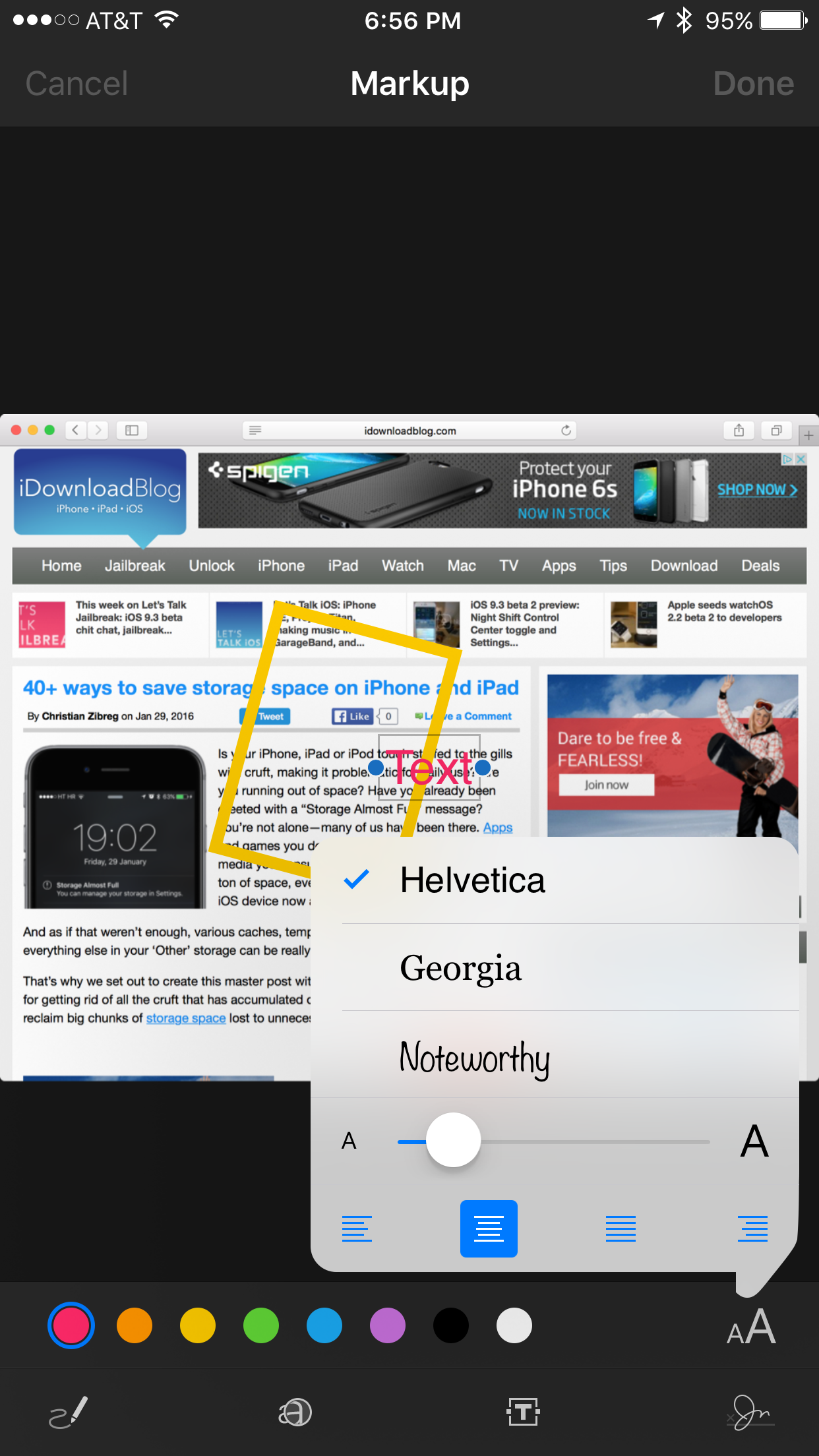 After you’ve chosen all the presets that you want, tapping and holding on the text box that appears will bring up an action menu where you’ll see a button labeled “Edit;” tapping on this button brings up the keyboard so you can begin typing any annotations you want to appear on the image. 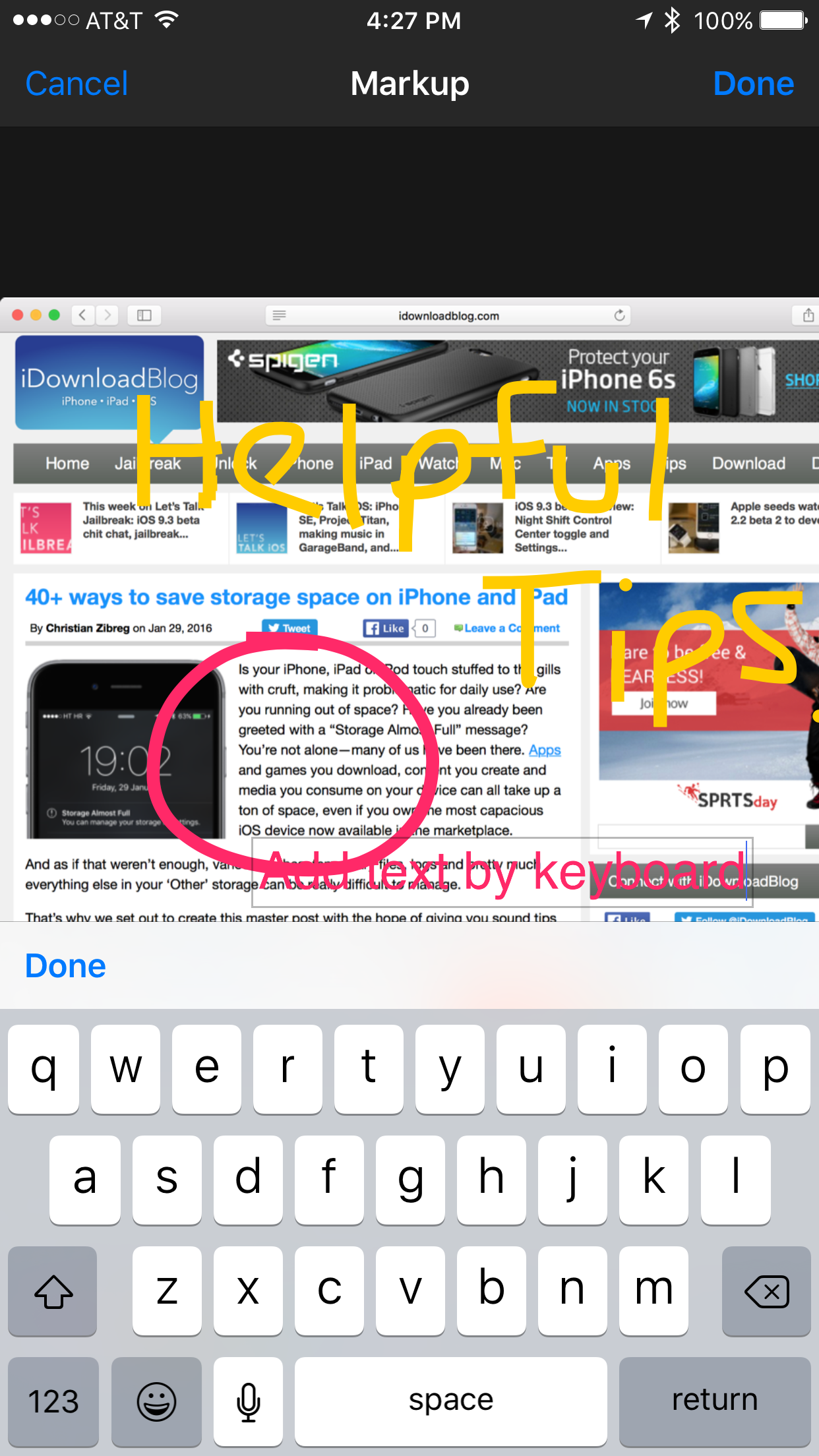 To do this, you’ll tap on the signature button, which is the button all the way to the right at the bottom of the Markup interface. When you do, you’ll be greeted with an interface asking you to sign on the line, like this one: 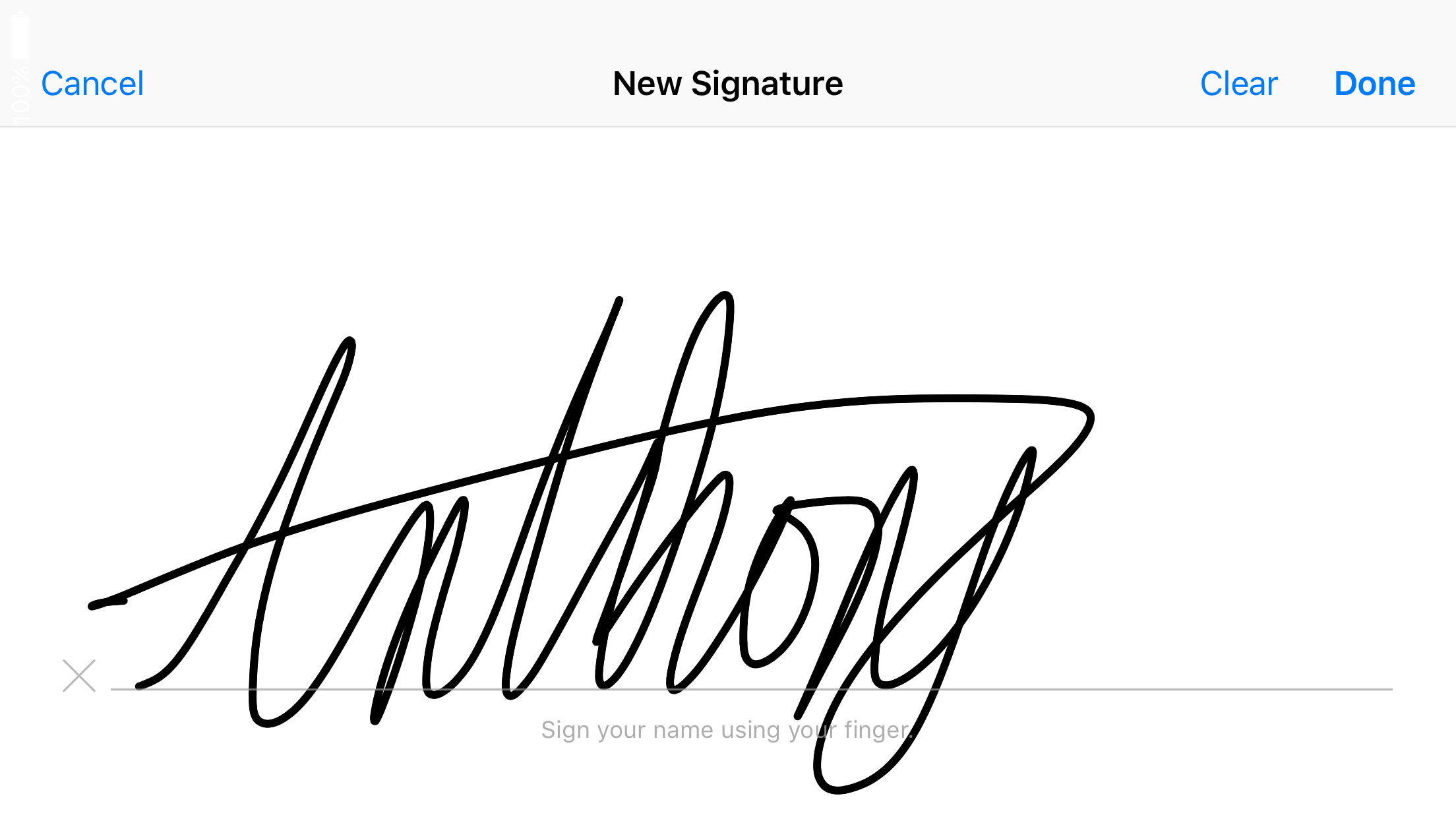 After adding the signature, you can tap and drag, or even resize the signature to your heart’s content with the blue dots that appear around it. Tapping and holding on the signature also gives you the option of deleting or duplicating the signature anywhere in the annotations just like the other Markup features we outlined above. 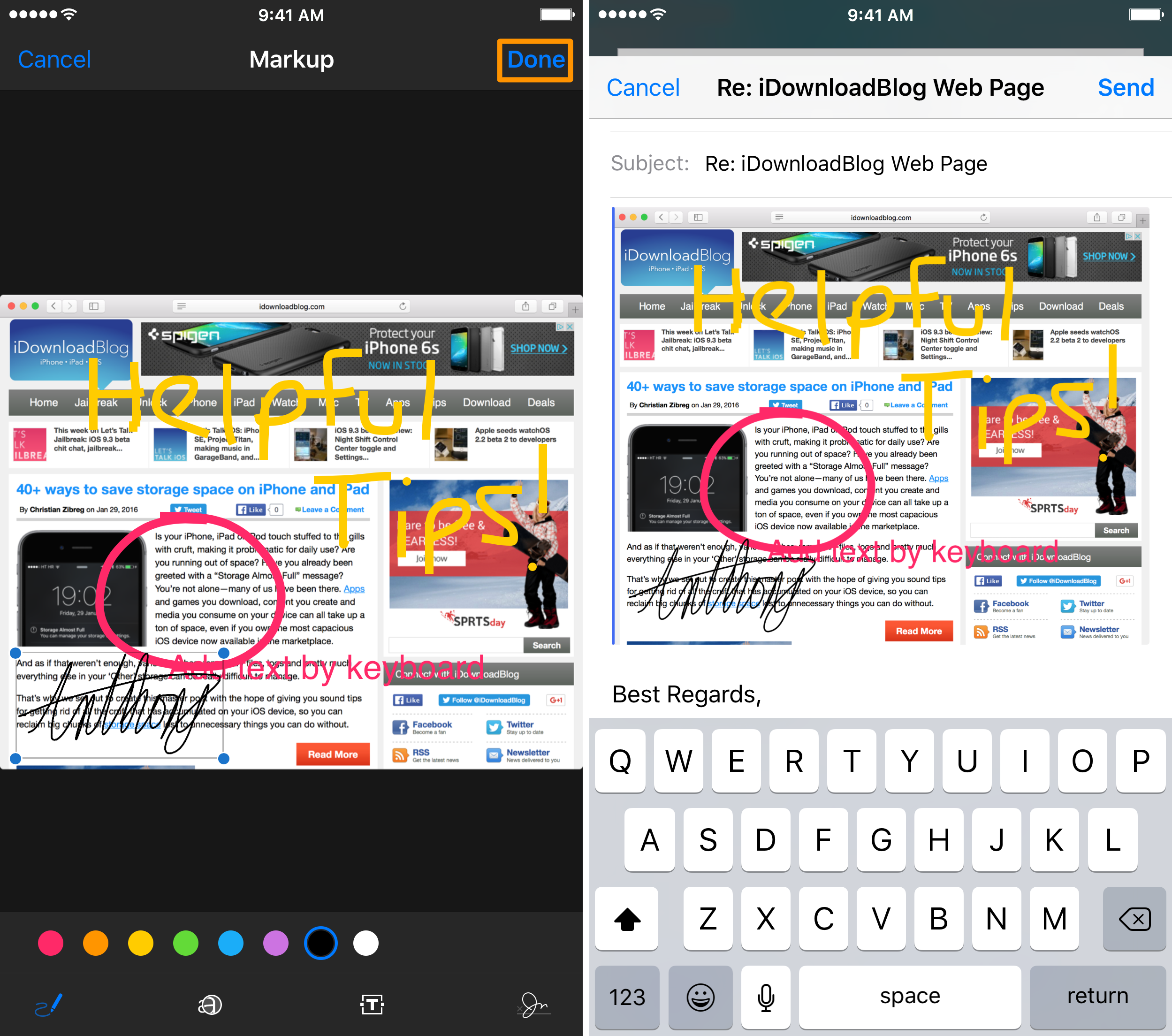 When you’re done making edits to the image file, tap on the “Done” button at the top of the Markup interface, as shown above, and the edited image file will be automatically attached to a new email draft that you can begin typing an email reply in for the recipient.

How Markup changes the way we communicate

It used to be that when you wanted to point something out in an image attachment in an email, you had to either describe it in detail with words, or you had to save the image to your computer, open the image in a photo editing app like Photoshop or Pixelmator, make the necessary edits with complicated editing tools, and then re-send it via your Mail app.

It’s also great for PDF files that have forms, as you could potentially fill out the forms electronically without ever having printed them, wasted time writing on them, and then scanning them into an image just to re-send them later.

Obviously, such a process would have taken a painstakingly long time for something that could have been simplified so much more, and with Markup, all of those basic features are added to your Mail app so you can accomplish everything then and there while on the go.

All this leaves us wondering why Apple didn’t open the Markup feature to all apps. Why just the Mail app? This is a mystery at this point, and hopefully Apple will realize the potential of Markup and make it more widely available in future software updates.

It is always easier to describe things with a picture than to try and describe it with words, after all, a picture is worth a thousand words, as the saying goes. So why not take advantage of Markup for yourself if you haven’t already?

Do you use Markup to modify your attachments often? Share in the comments below!