You can install apps manually on your Apple Watch or have the watch version of compatible iPhone apps install automatically.

In this tutorial, we show you three ways to install apps on Apple Watch with or without the paired iPhone. 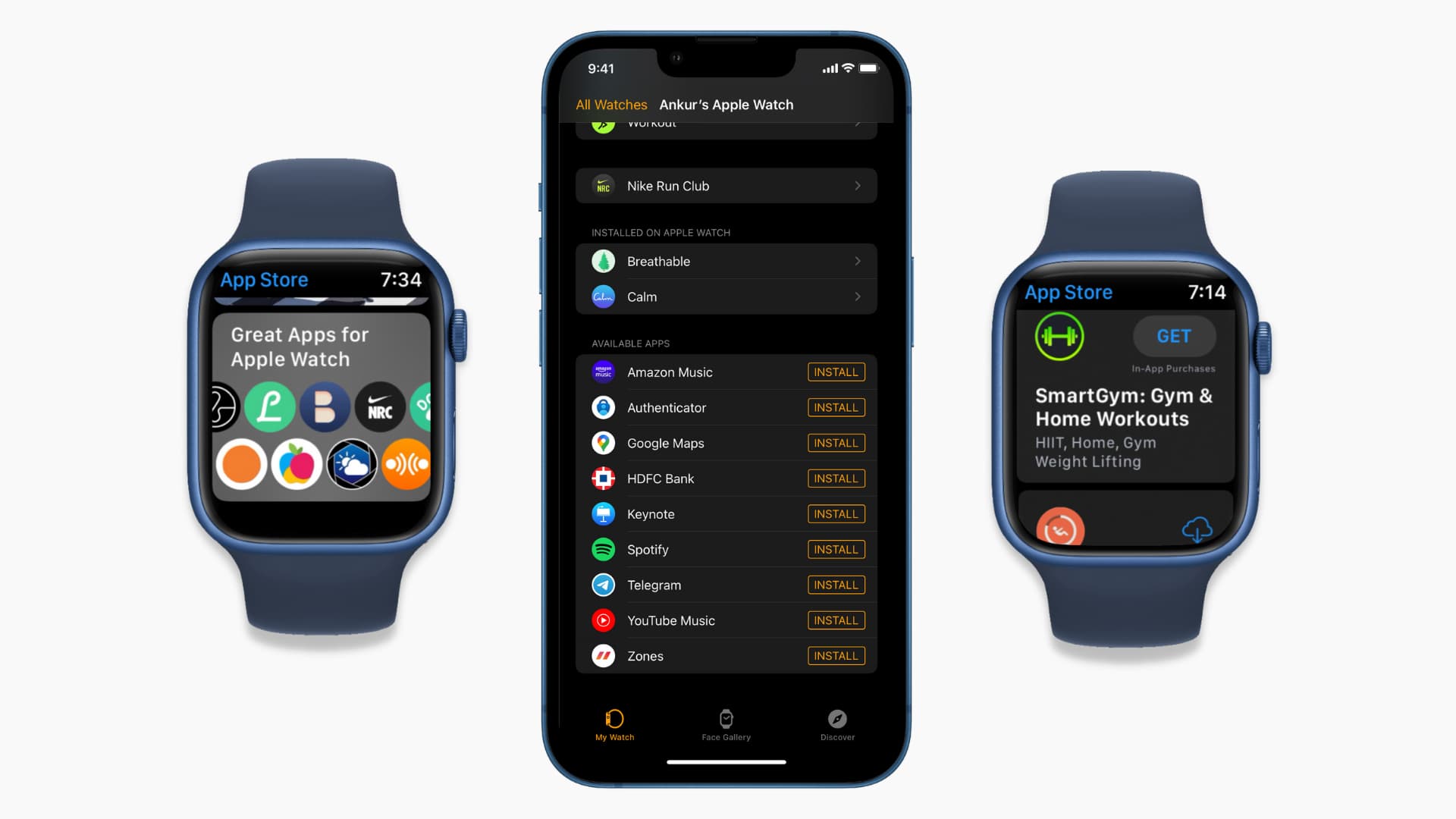 How to install apps on Apple Watch

These steps apply to all Apple Watch models, including Apple Watch Series 7, 6, SE, 5, 4, 3 running any modern version of watchOS, like watchOS 8.

1) Open the Watch app on your iPhone and tap My Watch.

2) Scroll to the bottom and under Available Apps, tap Install next to an app. 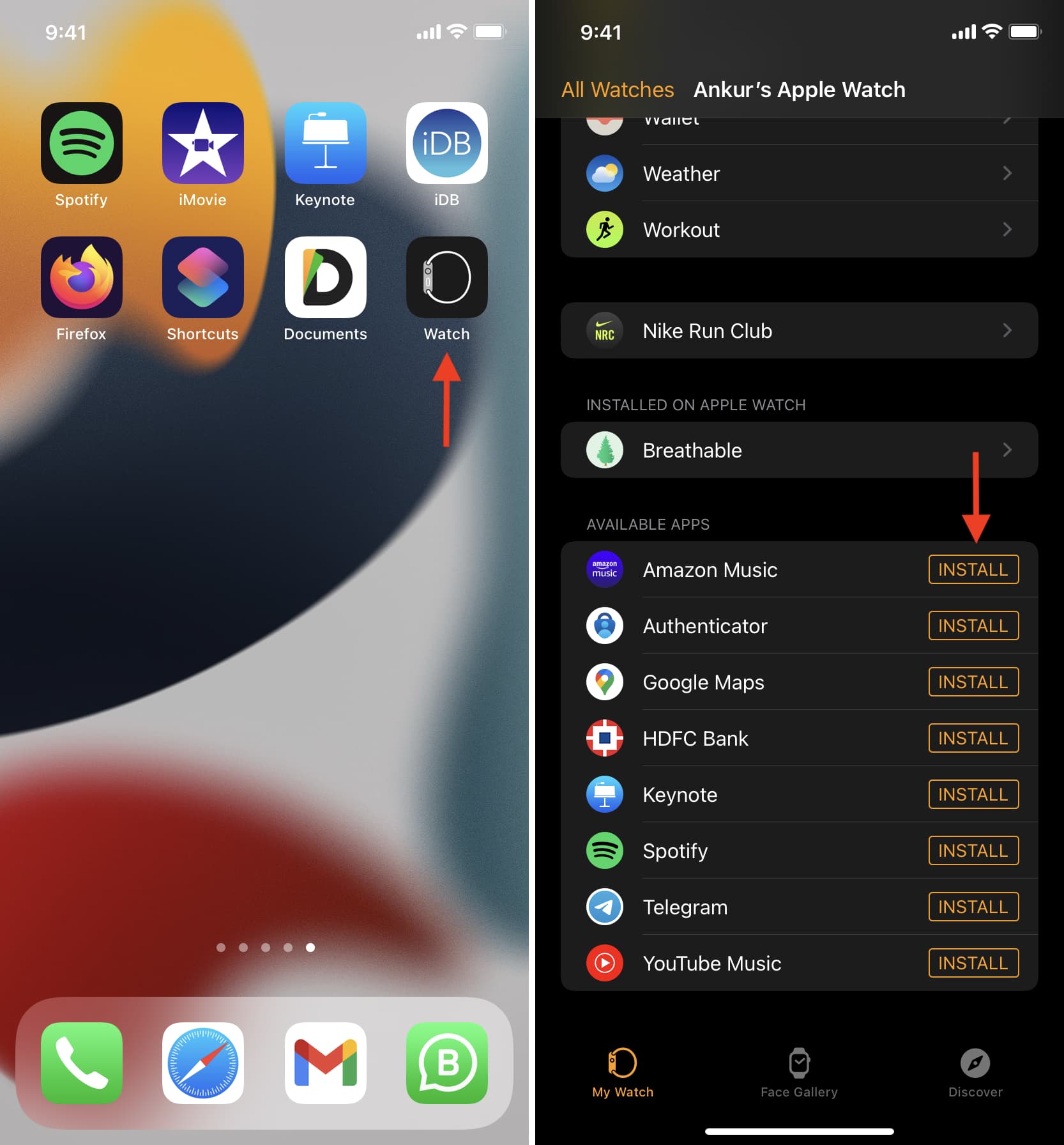 The apps you see under Available Apps are those whose iOS versions are already installed on your iPhone. When you tap Install, the watchOS version of the app is downloaded to your Apple Watch.

You can open the iPhone App Store and download apps that have a watch version. You can also scroll down the Apps section and from under Top Categories, tap Apple Watch Apps.

Additionally, in the Watch app, you can tap Discover > Explore Watch Apps. From here, tap GET or the download icon to have the app. Please note that this will also download the iPhone version of the app (if available). This new app will immediately appear on your Apple Watch if you have set Automatic App Install. If Automatic App Install is off, follow the above steps to manually install the app on your Apple Watch.

Starting with watchOS 6, the Apple Watch has an App Store with which you can download apps, update them, and see subscriptions. The on-device App Store removed the exclusive reliance on iPhone to get watch apps. watchOS 6 also added support for independent apps. This means a developer can create an app only for the Apple Watch; no need to have a companion iOS version of that app.

Here’s how to install apps on Apple Watch using the App Store:

1) Press the Digital Crown and open the App Store.

2) Scroll down to see the apps and tap:

If it prompts you to enter your Apple ID password, you can do it on the watch or the paired iPhone (you will see a prompt to type the password comfortably). 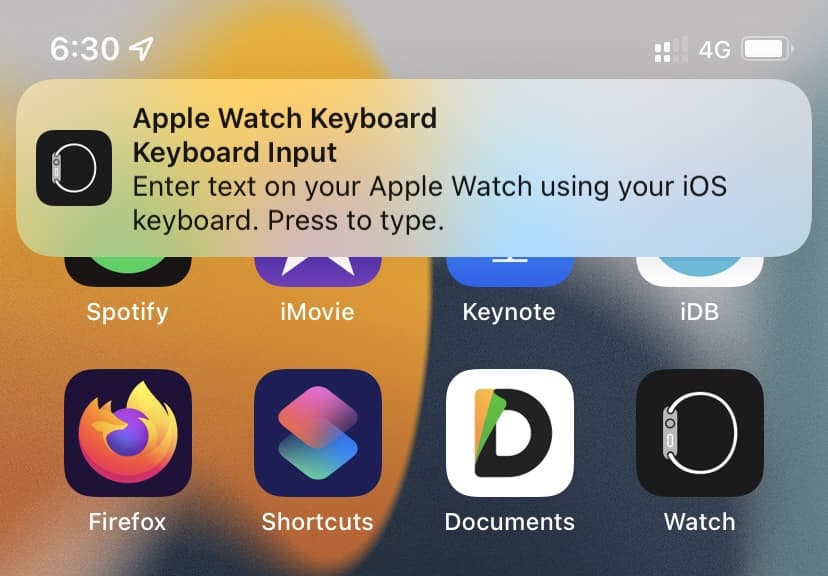 In the Apple Watch App Store, you can also use the search bar to find the app by name. Use the on-device keyboard (Series 7), scribble, or your iPhone to type the app’s name.

When you download an app using the watchOS App Store, only its Apple Watch version is downloaded. You can get the iOS version of that app (if available) separately from the iPhone App Store.

1) Open the Watch app and from the My Watch, tap General. 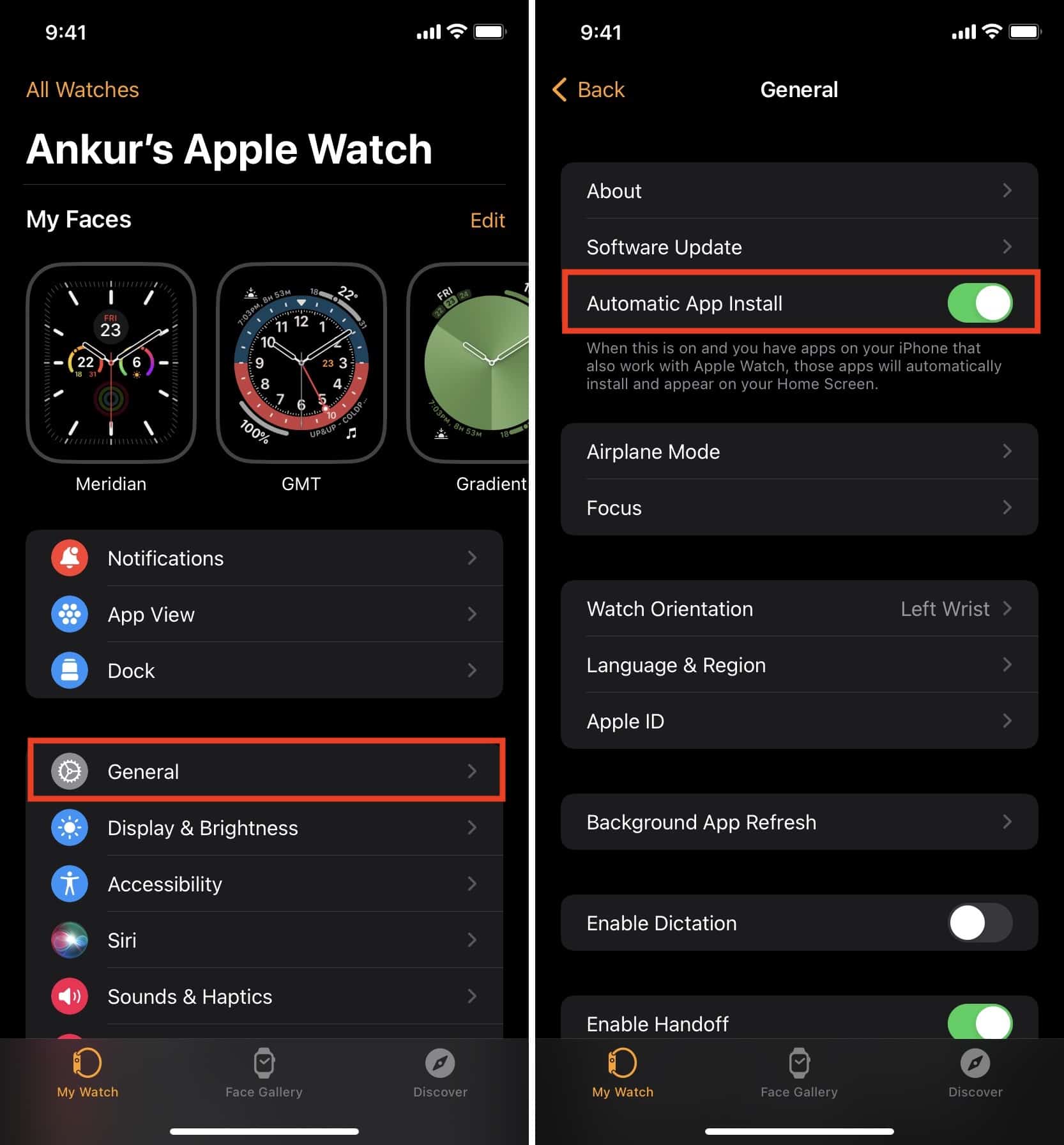 From now on, when you get an iPhone app that has a watch version, the app will automatically install on your Apple Watch as well. You do not have to install it manually from the Watch app (method 1 above).

The automatic approach is convenient. But one downside is that it also installs apps you might not need to the Apple Watch. This clutters the app layout on your Apple Watch and also fills its local space.

Related: 5 ways to free up storage space on your Apple Watch

How to know if an app supports Apple Watch or not

Apps you see in the Apple Watch App Store or via the Discover section of the iPhone Watch app are definitely those that support Apple Watch. For other apps, open the iPhone App Store and go to the app page. Below the image, it shows all the platforms that particular app supports, such as iPhone, iPad, Mac, Apple TV, Apple Watch, and iMessage.

Where are the downloaded apps on Apple Watch

Once the app is downloaded and installed on your Apple Watch, it will appear in the app grid, which is accessed by pressing the Digital Crown.

In the app grid, you will have to identify an app by its icon. If you can’t do that, press anywhere on the screen and choose List View to see all apps in alphabetical order with their app icons and full names.

You can also call Siri on Apple Watch and ask it to “Open [app name].”