Following the advent of iOS 7 earlier today, Apple appears to be busy making small but useful changes to its App Store. First up, the company’s added a new ‘Designed for iOS 7’ App Store section, basically a curated selection of third-party apps which are designed with the iOS 7 user interface and technologies in mind.

So, I went ahead and tried downloading the Infinity Blade III game, which hit the App Store earlier today, using my iPhone 5 running iOS 7, while only on a cellular network. 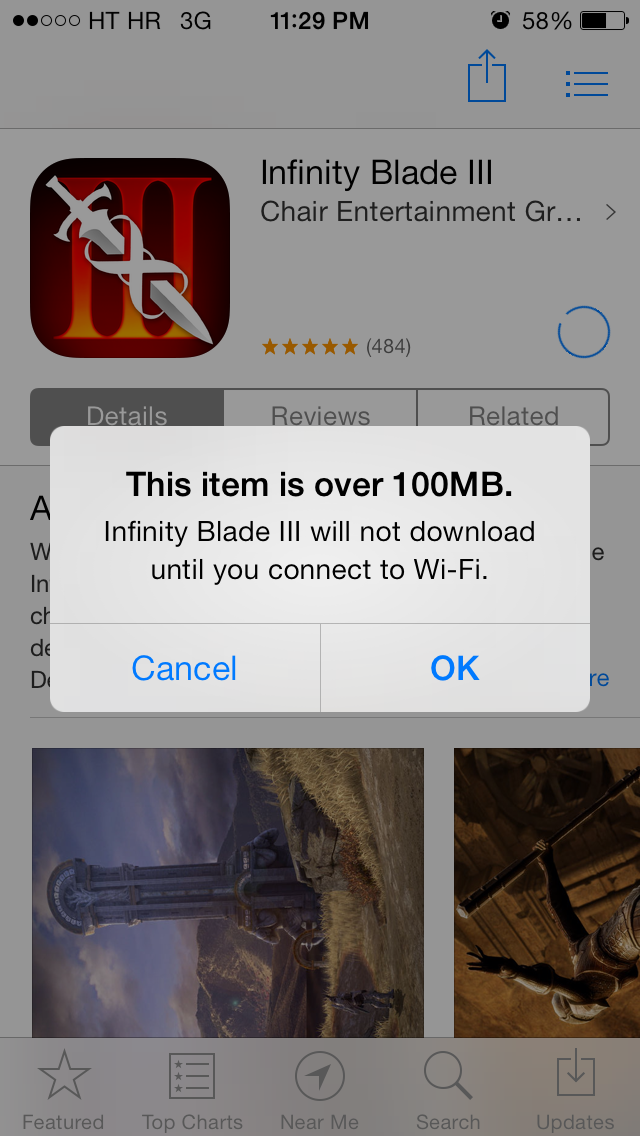 If you’re on a metered plan (especially those on 250/500MB a month tiers), this bump won’t mean much to you. You may recall the App Store had originally debuted with a per-app limitation of a measly ten megabytes.

Apple then raised the ceiling to 25MB and then again bumped it to 50 megabytes in March of last year to account for the Retina iPad apps. If history is an indication, the newly imposed ceiling should apply to movies, television shows, podcasts and other media content offered on the iTunes Store.

Users needn’t do anything on their end, it’s a simple backend update on Apple’s part.

The only reason I could think of for doubling the limit is that app binaries are about to increase in size, probably due to the combined 32-bit and 64-bit code.

Universal binaries with code and assets for multiple form-factor iDevices (Retina and non-Retina) have been around for some time now. However, Apple earlier this week invited developers to start optimizing their warez for the iPhone 5s’s 64-bit A7 chip.

Building such apps is easy, Apple says, because the Xcode tool automatically builds binaries that will run on both 32-bit and 64-bit devices. 64-bit binaries will be standalone downloads as a stopgap solution of sorts until Apple documents the new binaries some time next month.

These will be designed for easy delivery of 32-bit and 64-bit code in a single app package, the company said. Keep in mind that 64-bit code generally takes more space than the 32-bit one so expect such combined 32/64-bit apps to inevitably lead to increased download sizes.

Apple may also be laying the groundwork here for the full HD television apps for a next-generation Apple TV set-top box.