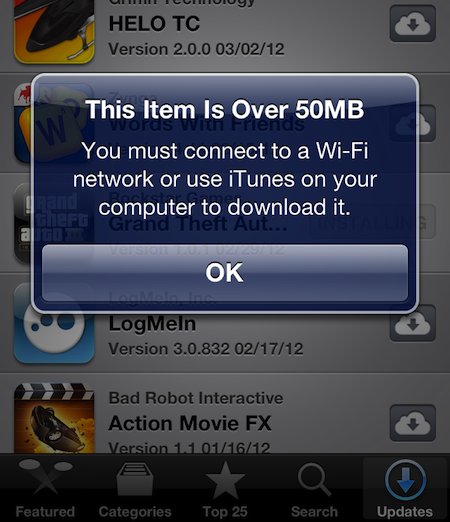 Although the App Store and all of its wonderful applications are accessible over a 3G network, there’s a bit of a caveat. Apple prevents you from downloading larger applications when using anything but a Wi-Fi connection.

That limitation used to be a measly 25MB, meaning anything over that would prompt a pop up that would tell you to connect to a Wi-Fi network to download. But it looks like today, Apple has bumped that limit up to 50MB…

As noted by AppAdvice, applications under 50MB can now be downloaded over 3G. It appears that the same thing goes for iTunes music and videos.

The update, which coincided with today’s iPad event, is likely to help accommodate growing app sizes as developers look to make their titles compatible with the new tablet’s Retina display.