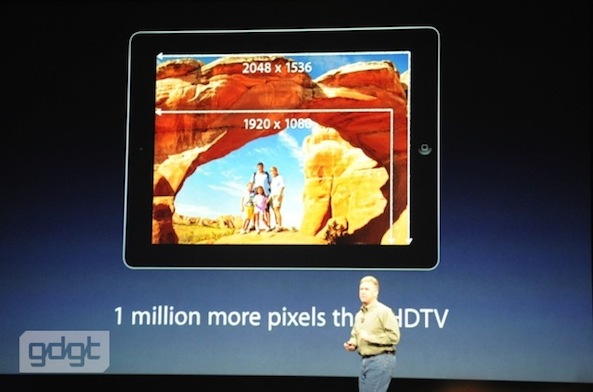 Among the seemingly hundreds of contradicting iPad 3 reports we’ve heard over the past few months, one piece of gossip in particular has held true: the Retina display. And like so many of the other rumors, this one materialized today.

Apple just unveiled its new tablet, the iPad 3, complete with a staggering 2048 x 1536 resolutions. Simply put, this means the screen of the new tablet contains roughly 4x more pixels than its predecessor…

To this day no one has yet matched that display technology on any mobile device. We’re going to bring it to the 9.7 inch screen of the iPad. This presents a problem for us though… for the first time an iPad has a higher resolution than even the display behind me. […] Text sharper than a newspaper. Photos will look incredible. Fonts look amazing, it’s a huge step forward. […] Put another way, you all have an HDTV at home , 1080p — an iPad has more pixels. That’s incredible.