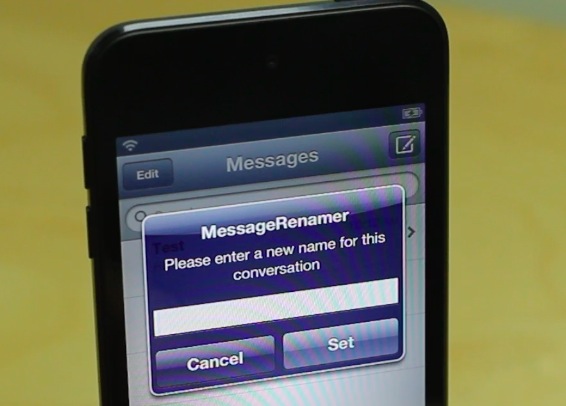 MessageRenamer is a recently released jailbreak tweak that allows you to quickly and efficiently rename conversations contained within the stock Messages app. The tweak, which features no options or settings to configure after installation, can be used by simply tapping and holding on the header of a conversation.

MessageRenamer is handy for a variety of reasons, but it’s especially useful when it comes to providing context for an ongoing group conversation. For instance, say you have a conversation with a bunch of work clients. Instead of having to fish through a list of ambiguous names, you can simply locate the message header named “Work” and have at it.

Want to see how MessageRenamer operates in action? Then check out our full video walkthrough after the break.

As stated, to use MessageRenamer, simply tap and hold on a conversation while in the Message app list view. You’ll then notice a pop-up not unlike the copy and paste dialogue normally present on iOS. From here you’ll see three options, Rename, Reset, and Cancel.

The Rename option is the primary option that you’ll be using here. Using the rename option will bring up a dialogue box prompting you to enter a name for the conversation. After doing so, tap the Set button to confirm the change, and you’ll notice the name of the conversation instantly change to the name you selected.

Along with the bug fix, the developer of MessageRenamer decided to revamp the pop-up dialogue box. Instead of using the heading “MessageRenamer”, which makes it evident that you’re using a jailbreak tweak, he decided to go with a more iOS friendly heading instead. As a result, MessageRenamer looks and feels more stock.

MessageRenamer really is a gem of a tweak, and it’s incredibly useful if you normally find yourself engaged in many group conversations. It makes it infinitely easier to locate and place context to group conversations, and helps to keep your Messages app nice and tidy.

If you’re a biteSMS user, it must be noted that MessageRenamer doesn’t yet play nice with the Messages app alternative. Within biteSMS, a long hold on a conversation heading toggles on/off notification alerts. Whether or not MessageRenamer will gain compatibility with biteSMS is anyone’s guess, but I’ve heard some rumblings that support is in the works.

If you want to try MessageRenamer, then head over to Cydia’s BigBoss repo and download it today. Despite its usefulness, the developer was kind enough to offer up his work free of charge. Let me know what you think about the tweak down below in the comments.