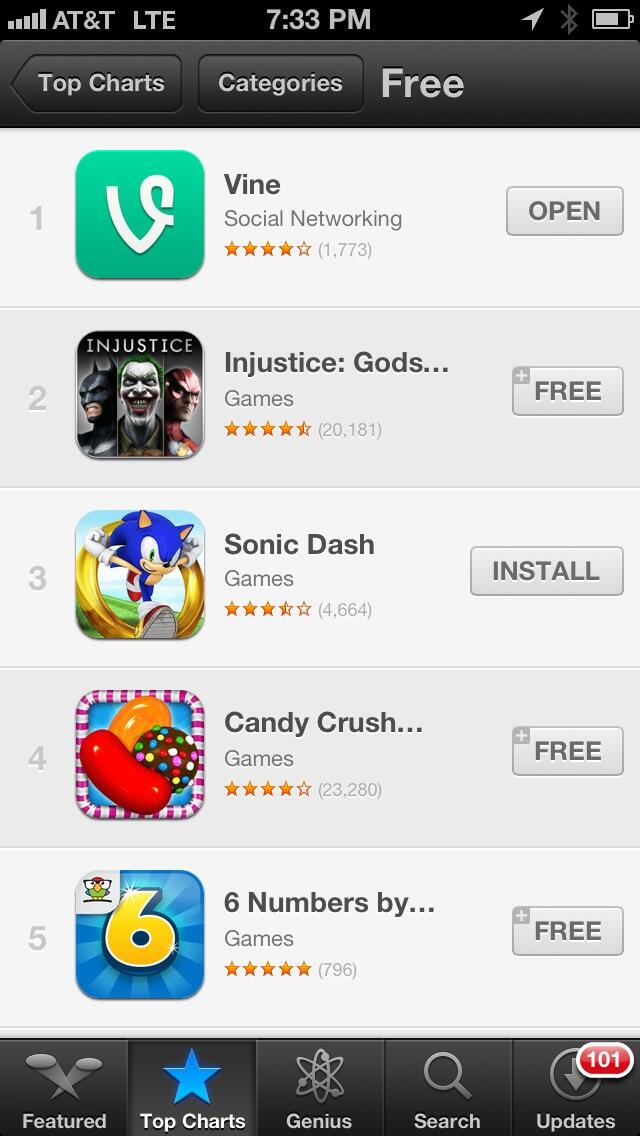 Here’s a reminder that Vine still exists: just six months after being acquired by Twitter and about two and a half months following its iOS debut, the Vine app is now the number one free software on the App Store. By comparison, Twitter’s own iOS client sits at No. 35.

Vine’s success is no small feat given that App Store charts are normally populated with a bevy of well-known games and entertainment titles which, by the way, command mobile app usage.

What’s more, Vine is a really quirky piece of work: for Christ’s sake, we’re talking an app which lets you share ultra-short six-second clips here. Yet, a bunch of other video sharing programs can only dream of rising on top of App Store charts. So, what’s the secret ingredient Vine has that similar programs lack?

Hey guys, remember that time we made the No. 1 most popular app in the world? @ckb @dhof @bobby @vineapp twitter.com/rus/status/321…

I can think of a number of reasons contributing to Vine’s success.

Firstly, Vine is a Twitter property and the micro-blogging service’s sheer reach and brand power must have played a big factor in Vine’s acceptance.

Secondly, that controversy with adult content surfacing in Vine’s Editor’s Picks section had people pay notice and at least wonder why all the fuss. I’m not saying this was a clever marketing stunt, but it didn’t hurt either. Adult content is still allowed on Vine, but the program now has a 17+ age rating.

Thirdly, Vine was refreshed with welcomed new features, among them the ability to share other people’s recordings through Facebook and Twitter. Social discovery matters and the more Vine links users encounter on popular social media properties, the more rapid adoption of Vine its owner Twitter observes.

Moreover, the popular Twitter iOS client Tweetbot now supports Vine clips in-line. Last, but not the least, in its most recent update Vine has enabled users to grab HTML snippets to embed clips in web pages (here’s how) and blogs.

What I’m wondering right now is whether or not you still use Vine?

I was initially excited about it, but the novelty soon wore off.

Really, I can’t recall the last time I used Vine.

I just don’t see the purpose of recording and sharing a few seconds of video.