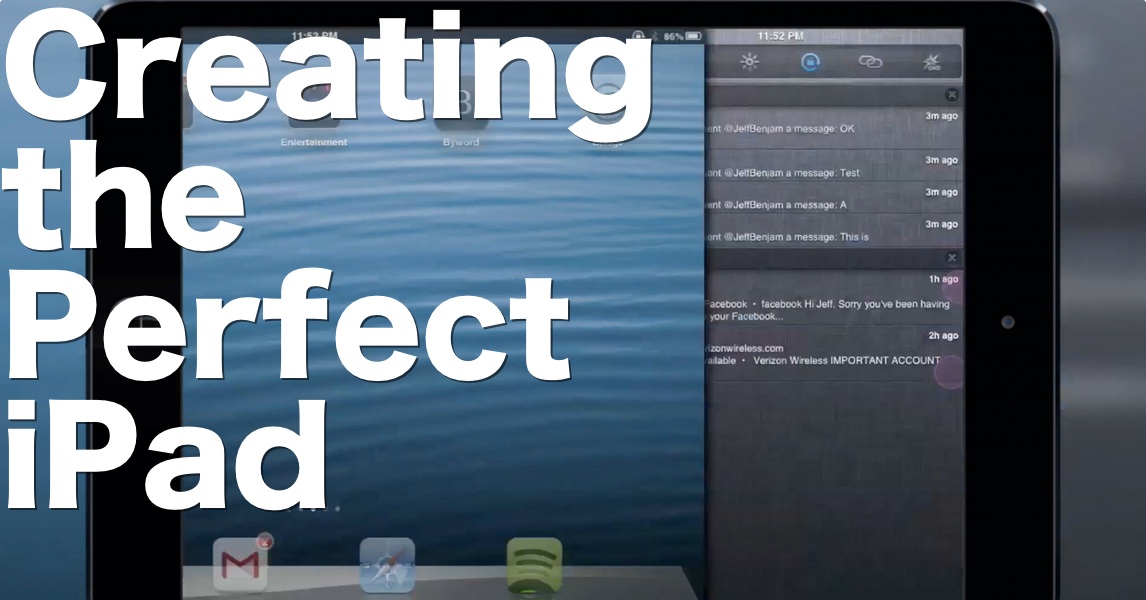 I’m going to be honest with you — jailbreaking an iPad hasn’t been nearly as appealing to me as jailbreaking my iPhone. But as I started working on this list, I realized that there really are some awesome, and I mean awesome ways to trick out your iPad once it’s jailbroken.

Considering that I do a lot of writing on my iPad, I found that a many of these tweaks immensely helped my writing workflow. Tweaks like BeeKeyboard, and SwipeSelection are absolute essentials for iPad writers, even if you’re not really into the jailbreak scene.

Obviously that’s not all, as virtually everyone will find a jailbreak app or tweak that suits their fancy. Yes, the iPad jailbreak scene is alive, and it’s better than ever. Despite my initial doubts, I was able to come up with this solid list of 15 best jailbreak tweaks for iPad running iOS 6. There’s no filler here, and no fluff — each of these tweaks represent, what in my opinion, is the best of the best. Take a look inside, and see for yourselves. 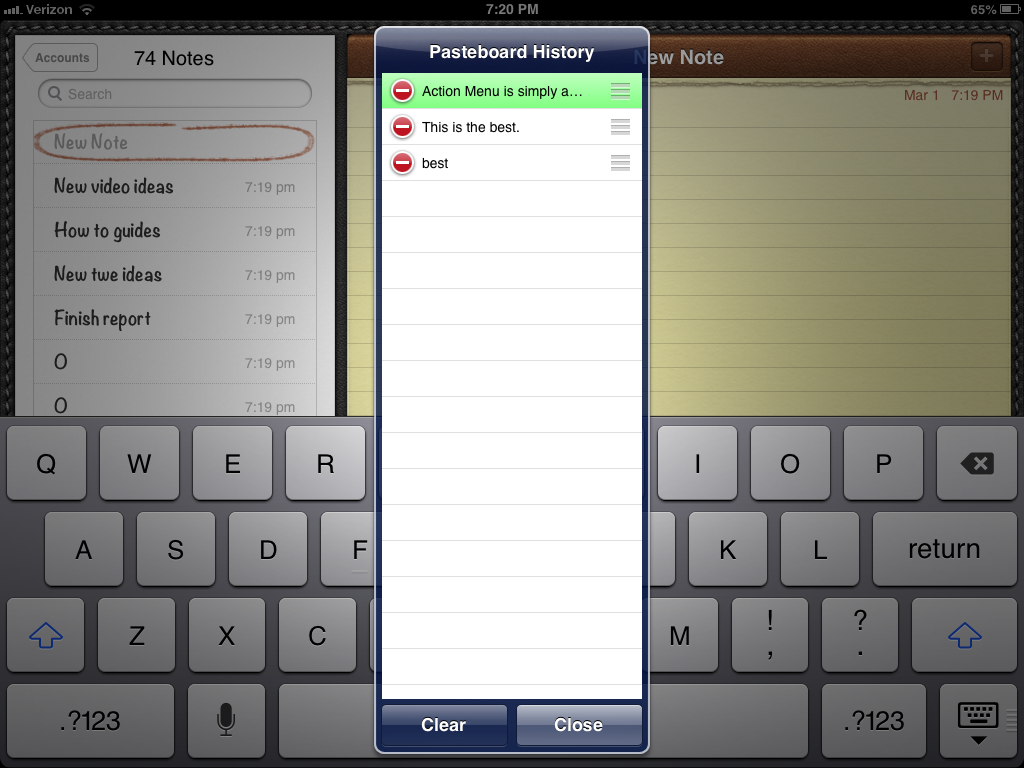 Among many other things, Action Menu allows you to access clipboard history

Action Menu is one of my favorite jailbreak tweaks due to its implementation of a handy pasteboard history feature. As someone who uses my iPad to edit text and create documents, having quick access to my pasteboard history is absolutely instrumental to getting work done. 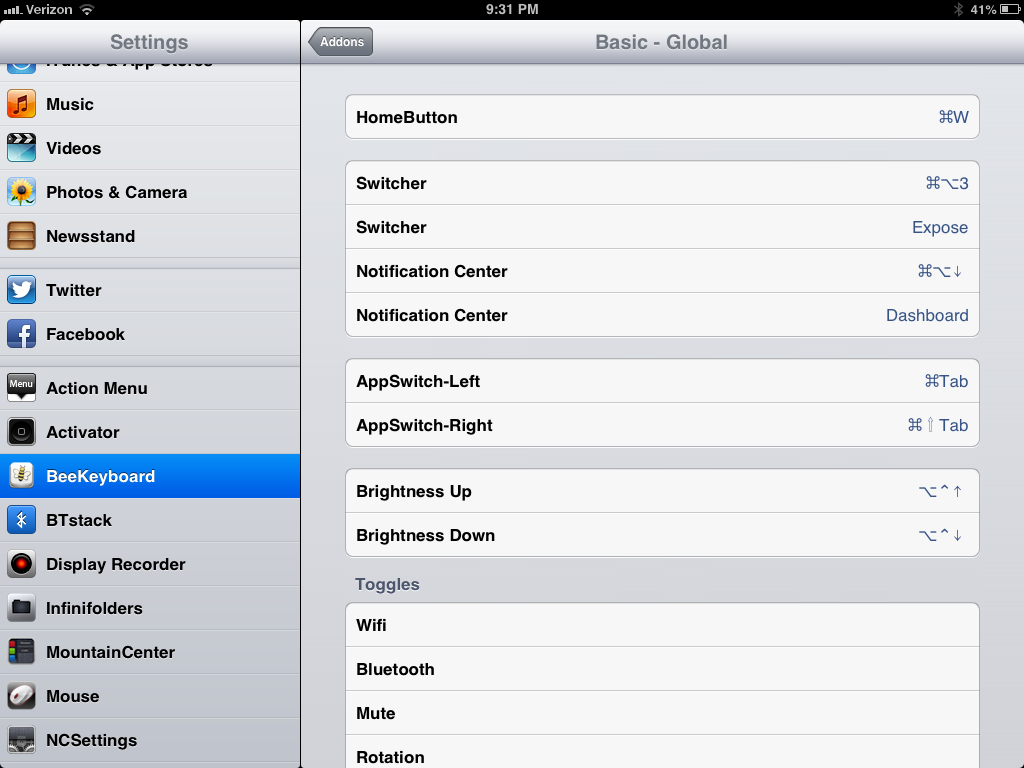 Assign Bluetooth keyboard shortcuts to a variety of iOS functions

BeeKeyboard is one of the first apps that you should download after jailbreaking your iPad. It allows you to quickly assign shortcuts to a variety of different iOS functions. Because it has built in Activator gesture shortcut support, there’s practically no limit to the amount of functions that you can assign to a simple key press.

The beauty of BeeKeyboard is that it also features a host of addons. These addons, some still suspended in development, allow you to create custom shortcuts for a variety of apps. There’s even a Safari addon that adds tons of exclusive keyboard shortcuts to the mobile Safari app. If it’s productivity you’re after, then BeeKeyboard is simply second to none. 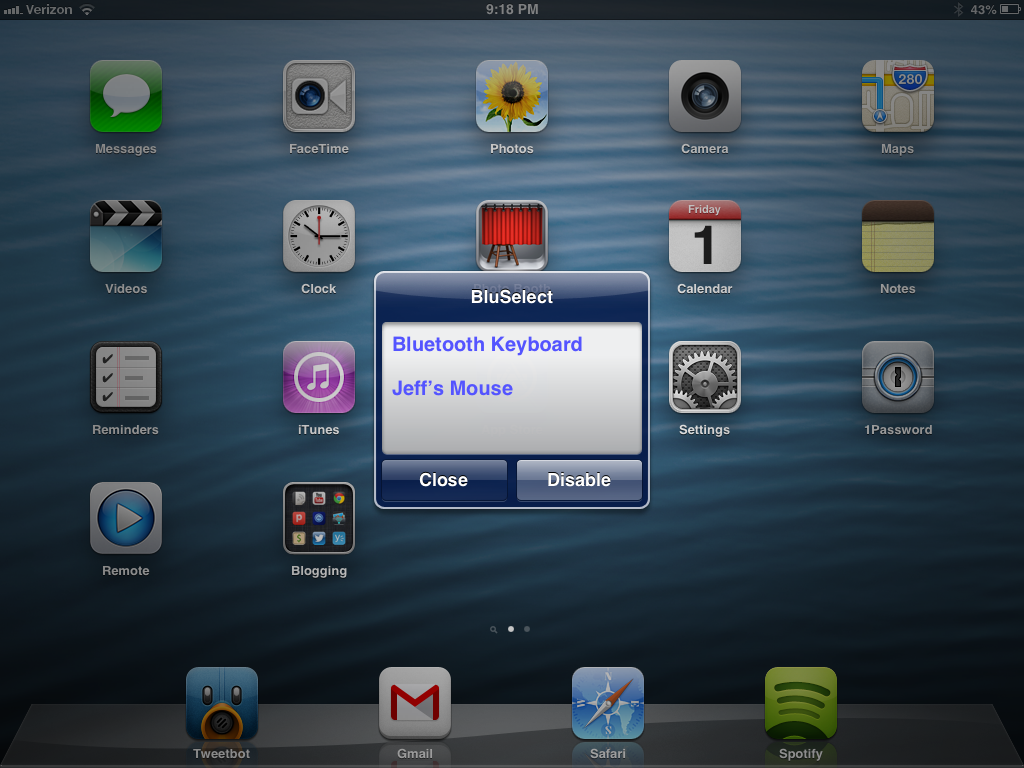 In my opinion, there’s been a sort of misconception regarding BluSelect. This tweak isn’t just your average Bluetooth toggle, as it may appear at first glance. Instead, this is a tweak that allows you to quickly connect to individual Bluetooth peripherals from anywhere. It does so by means of a well placed Activator gesture. I should also mention that it also works great for quickly tethering an iPad to the iPhone using the iPhone’s Personal Hotspot feature via Bluetooth. 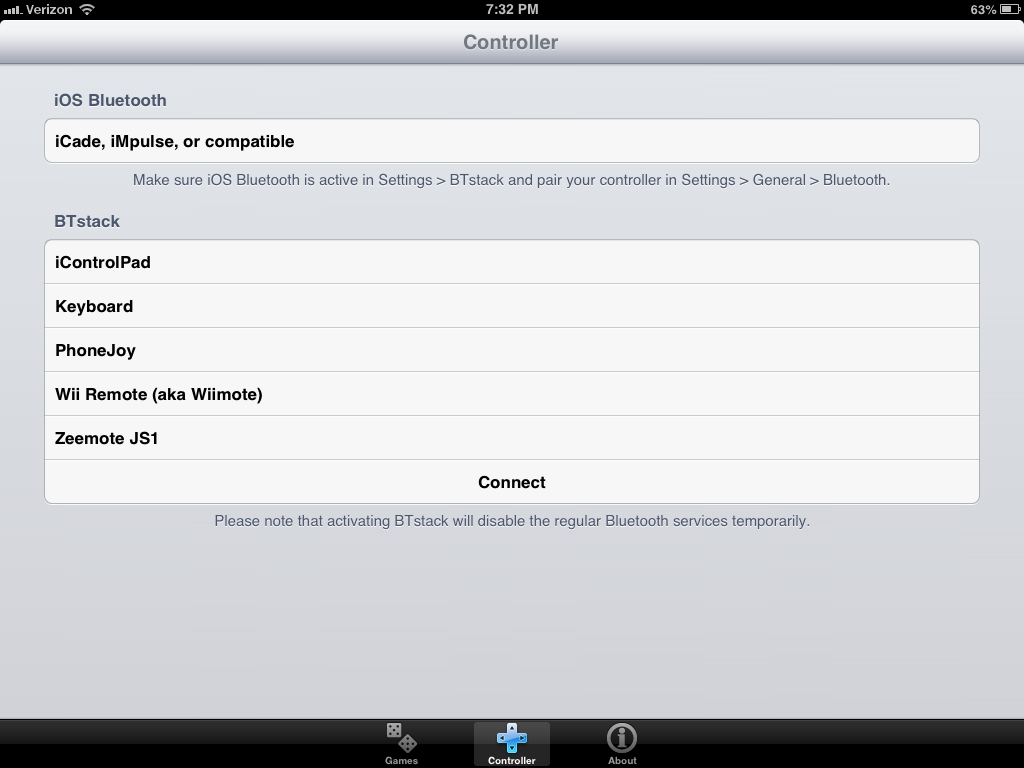 Control your games with the iCade, WiiMote, and coming soon, the PS3’s Dual Shock

I’ve blogged about Blutrol many times in the past, and I don’t plan on stopping anytime soon. This is a jailbreak app that allows you to connect a variety of external controllers to your iOS device. This means that it’s totally possible to use something like an iCade cabinet to control games that aren’t officially supported by the device. What’s even better? There’s rumored PS3 Dual Shock 3 support on the horizon. Good times. 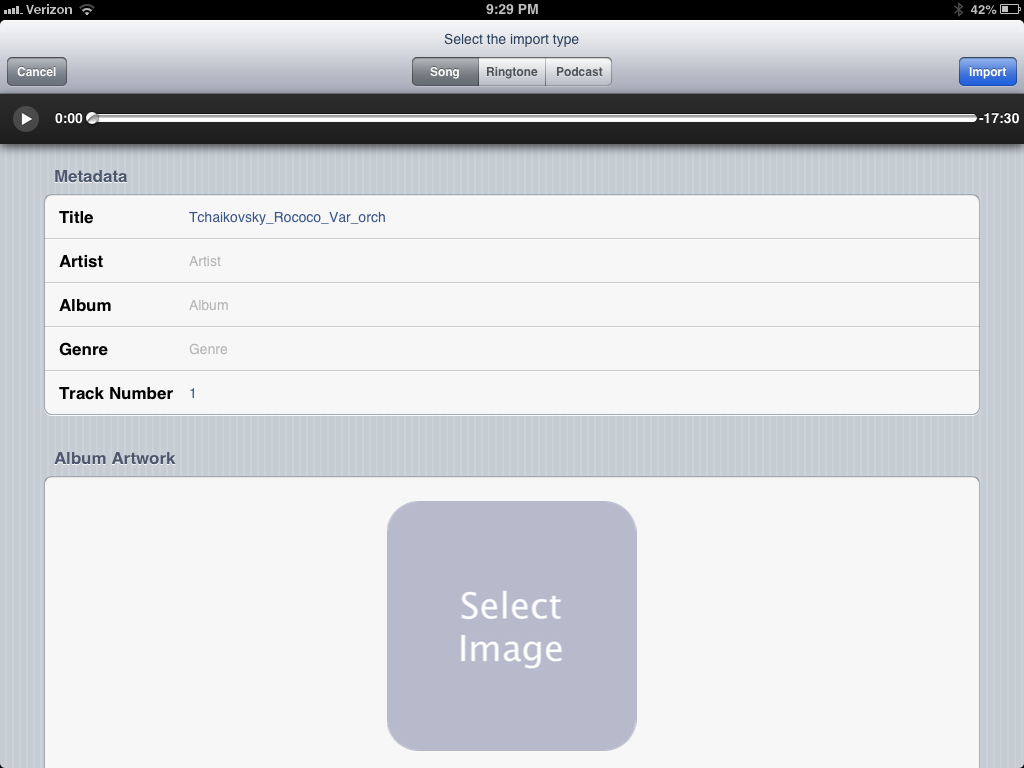 Import music directly into the Music app without iTunes

I’ve always found it a bit odd that you could never import your favorite tunes into the Music app without iTunes, but nonetheless, that continues to be the case. If you’re jailbroken, however, it’s easy to liberate your iDevice with Bridge — a tweak that allows you to easily import music, ringtones, and podcasts directly into the Music app sans iTunes syncing. 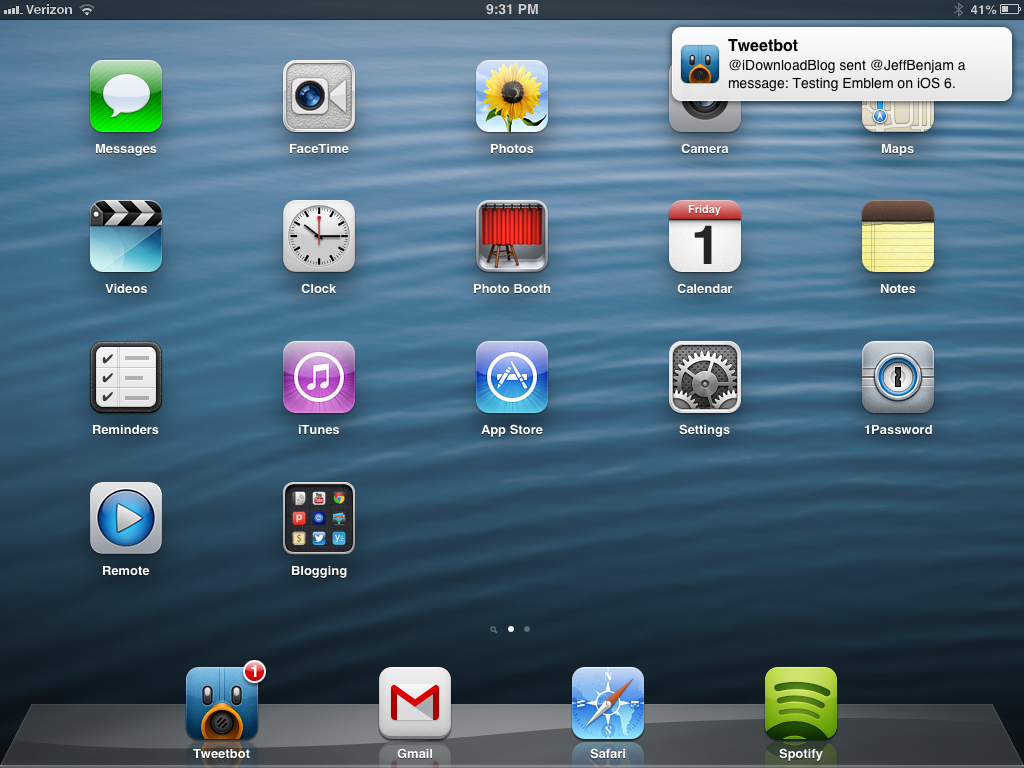 Banner notifications on the iPhone’s small screen work perfectly fine. On the iPad, though, I think they’re kind of ugly, and don’t adequately use the iPad’s available real estate. Emblem fixes this problem by presenting users with OS X inspired notification banners. It’s a bit difficult to see how beautiful this tweak is until you see it running in person, so I heavily advise you to give it a try. 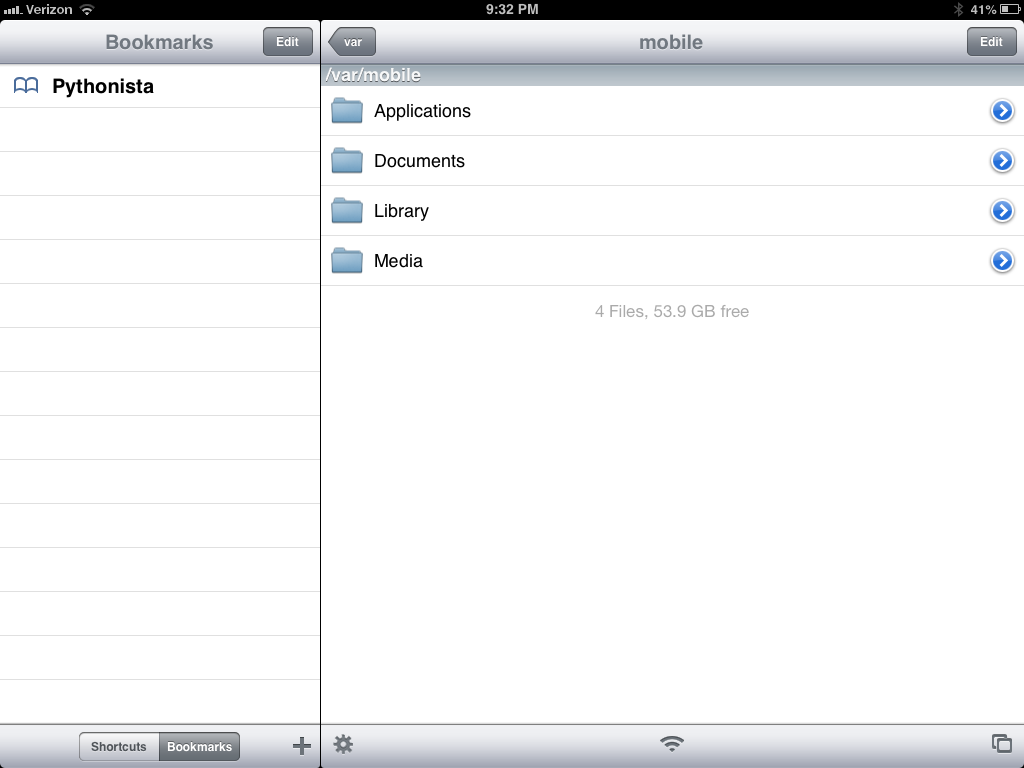 In order to make iOS easy to use and to protect users from themselves, Apple has restricted access to the native file system in iOS. At its root, iOS is basically just a stripped down version of OS X. This means that, yes, the same familiar file structure exists under the iPad’s pretty GUI. iFile gives you access to all of this, along with a host of other convenient features for the iPad. 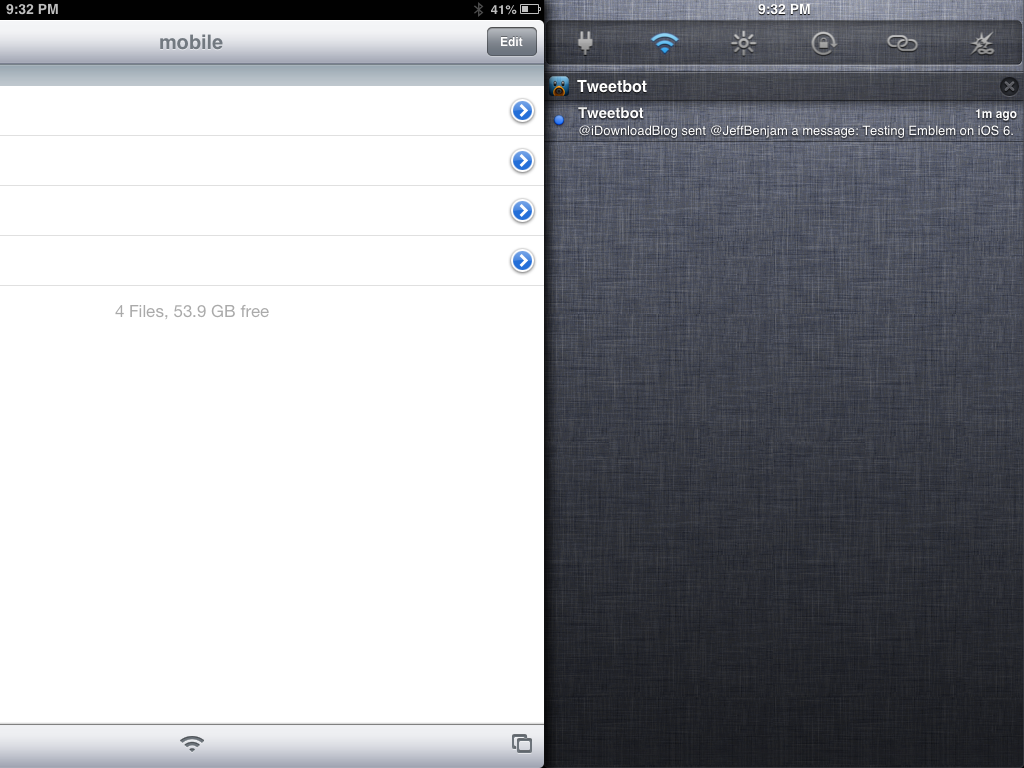 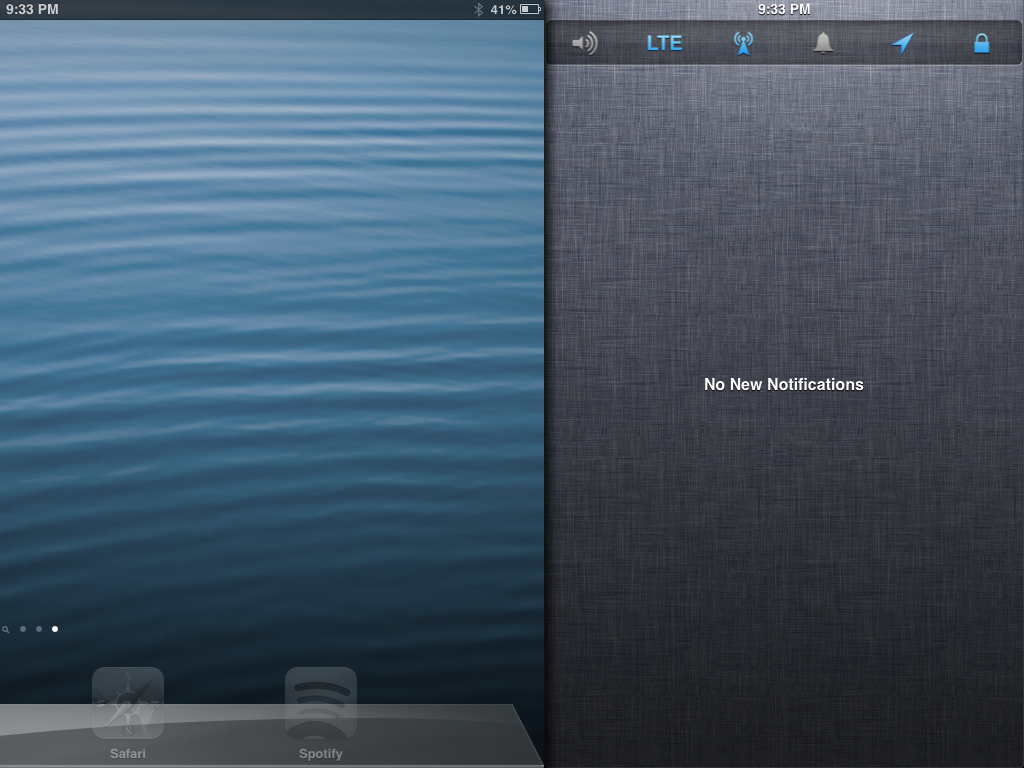 These handy quick toggles are an absolute must have 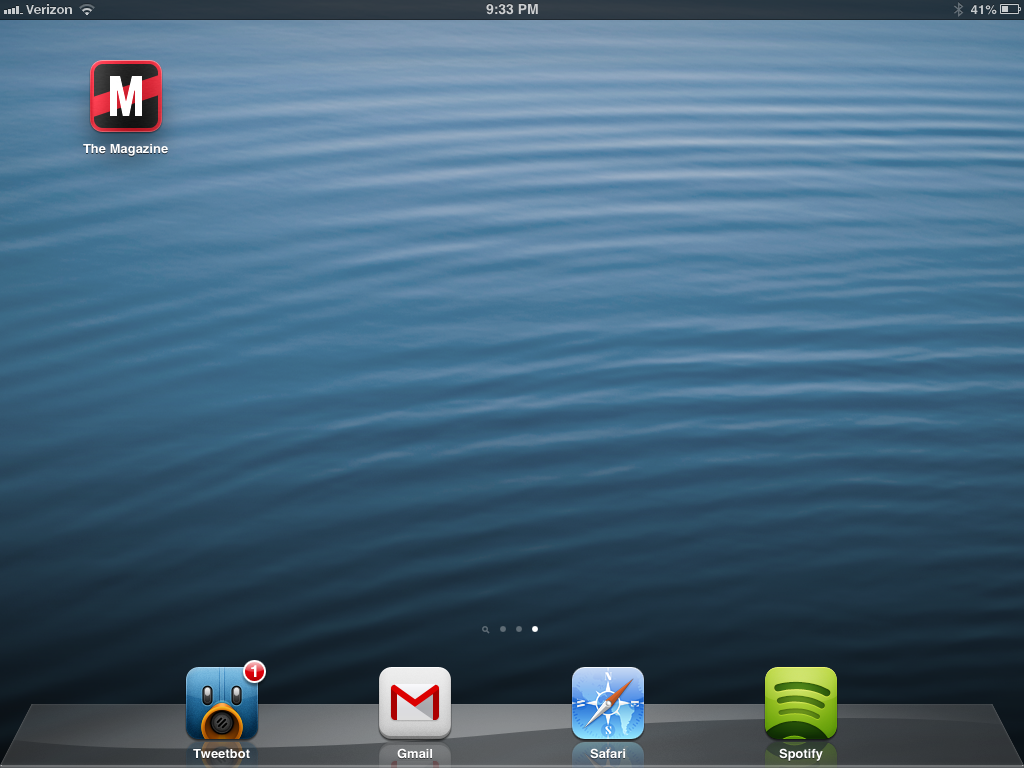 It seems like nearly everyone hates the Newsstand folder, which explains why there are about a million and one ways, jailbreak, and non-jailbreak, to get rid of it. The best such tweak is called NoNewsIsGoodNews. The wittily named tweak gets rid of the Newsstand folder on your Home screen, and places periodicals normally destined for the folder on to your Home screen as standalone apps. 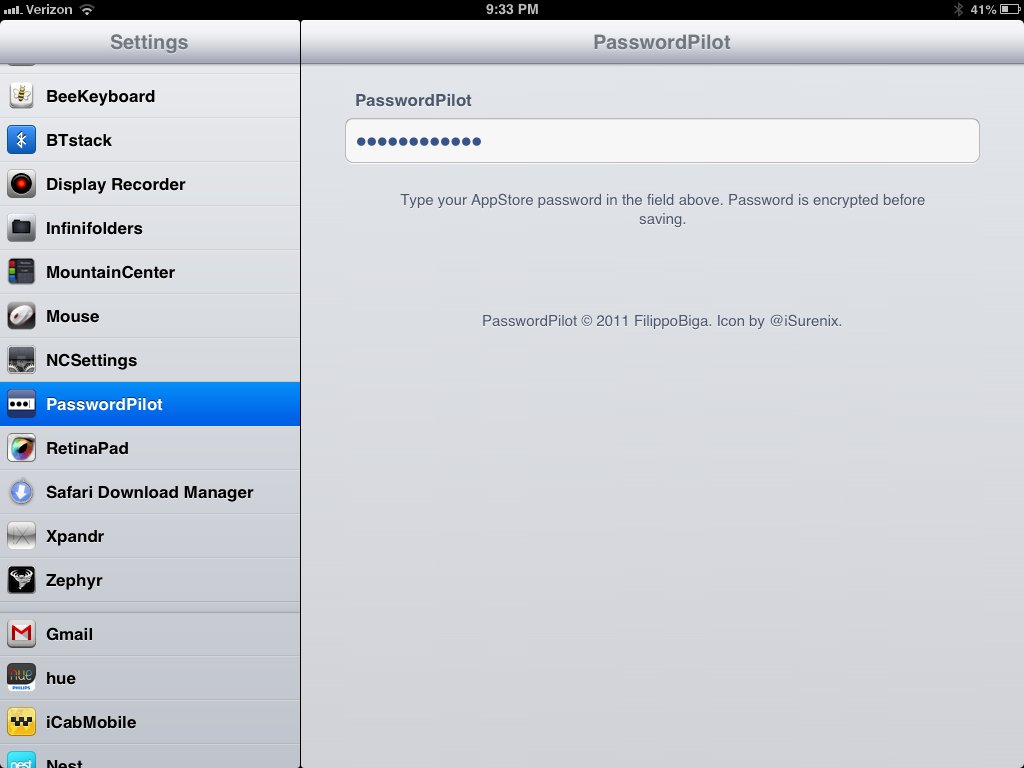 Never type in your iTunes password for App Store purchases

I don’t know about you, but my iTunes password is ridiculously complex. For that reason, it’s a huge pain to have to type it in every time I want to purchase a new app from the App Store. PasswordPilot is a great tweak that stores your password for you, so you’re always ready to make App Store purchases on the whim.
Price: Free
PasswordPilot direct Cydia link | Read more about PasswordPilot 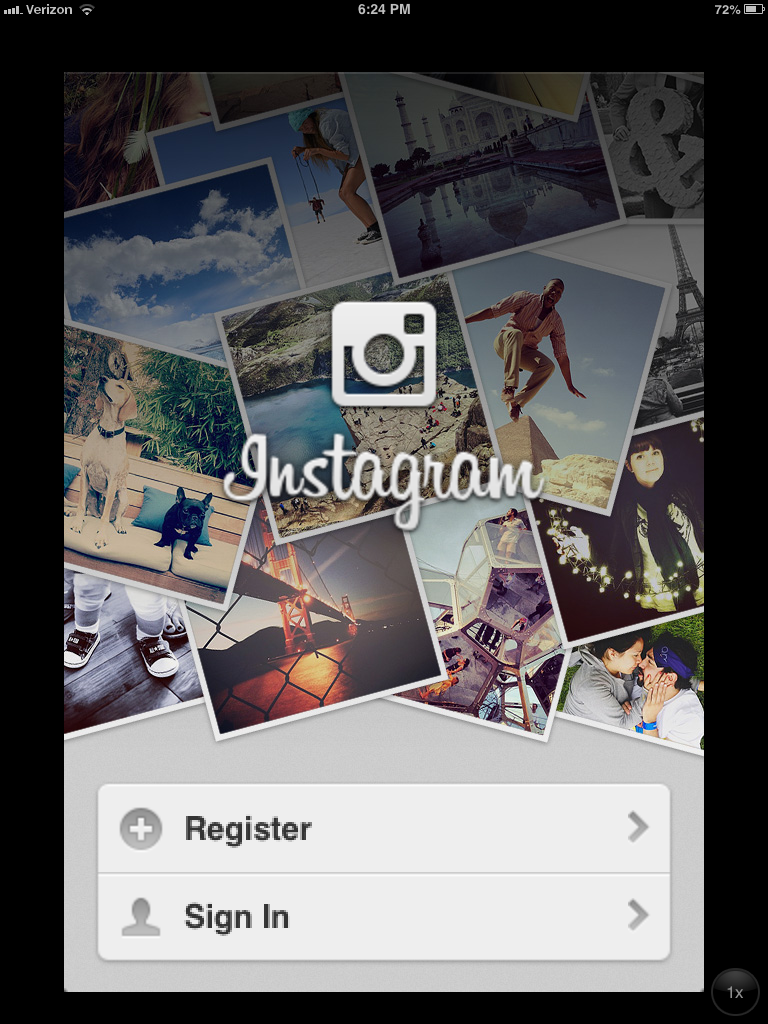 Without RetinaPad, iPhone only apps look nasty on the iPad 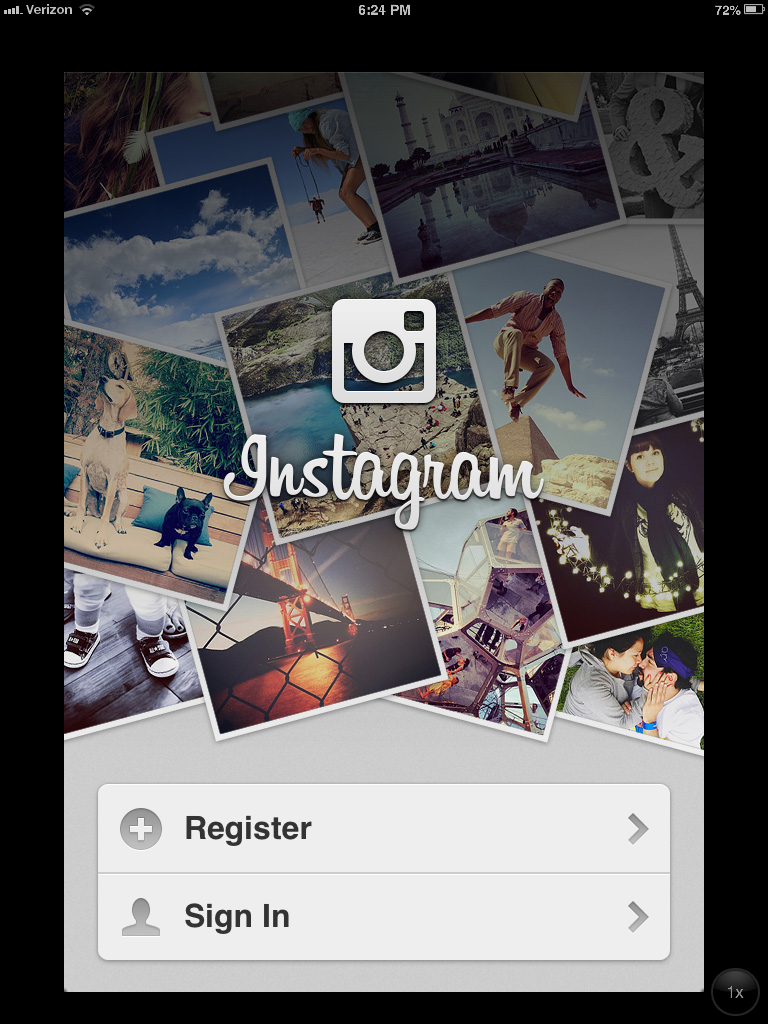 With RetinaPad, iPhone only apps look a lot crisper 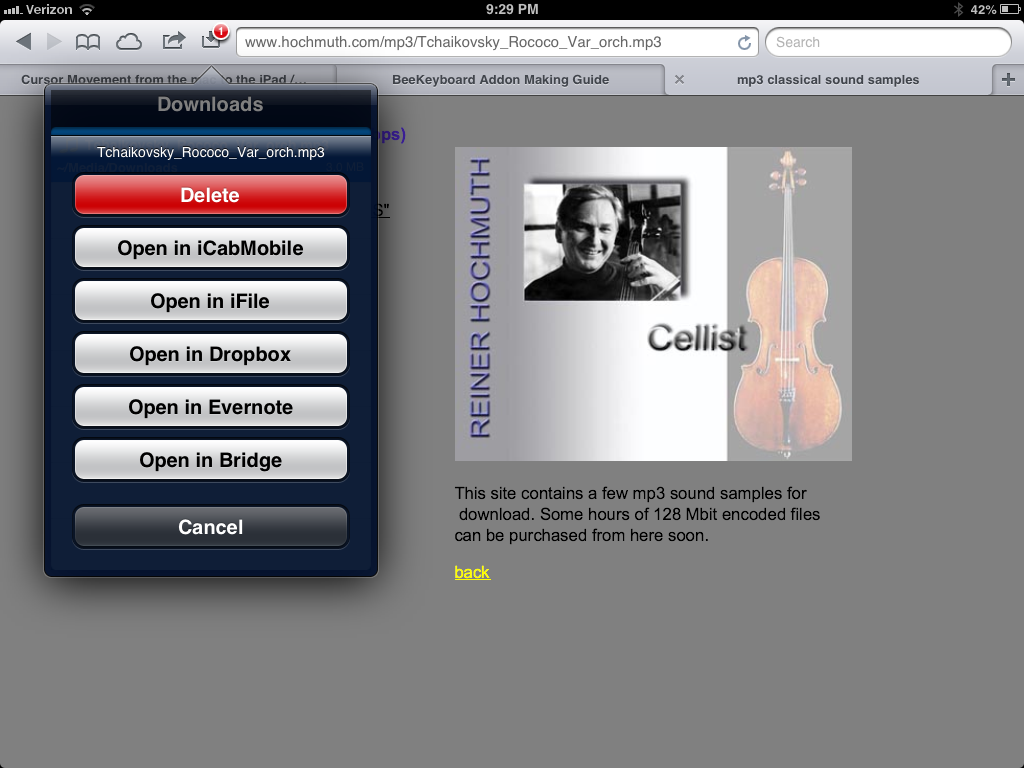 Simply put, if you hate it when iOS tells you what you can and cannot download, then you need Safari Download Manager. It, combined with the aforementioned iFile, pack a great one-two punch when it comes to file downloading and subsequent file management. 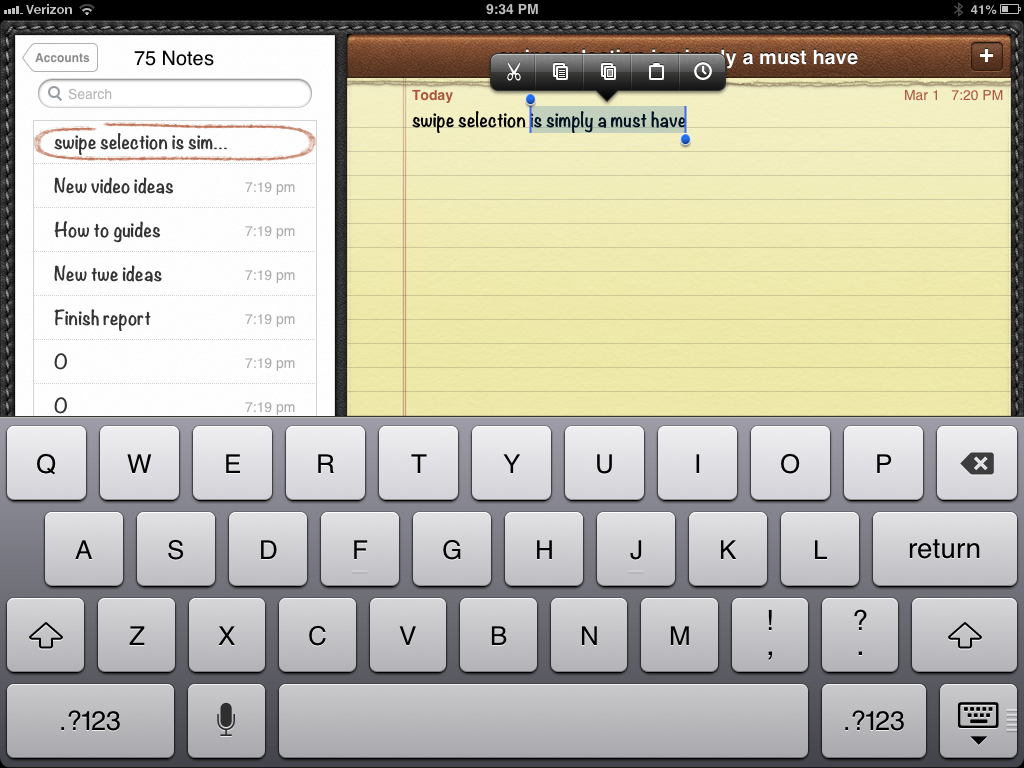 Editing text on the iPad is a colossal pain in the butt, which is largely due to the fact that it’s difficult to quickly position your cursor in the exact place where you need it. SwipeSelection remedies this. It allows you to swipe to exact cursor locations via swipes on the keyboard. Watch the video to get a clear idea as to what I mean. I promise, you’ll never want to go back to traditional text editing on the iPad again.
Price: Free
SwipeSelection direct Cydia link | Read more about SwipeSelection 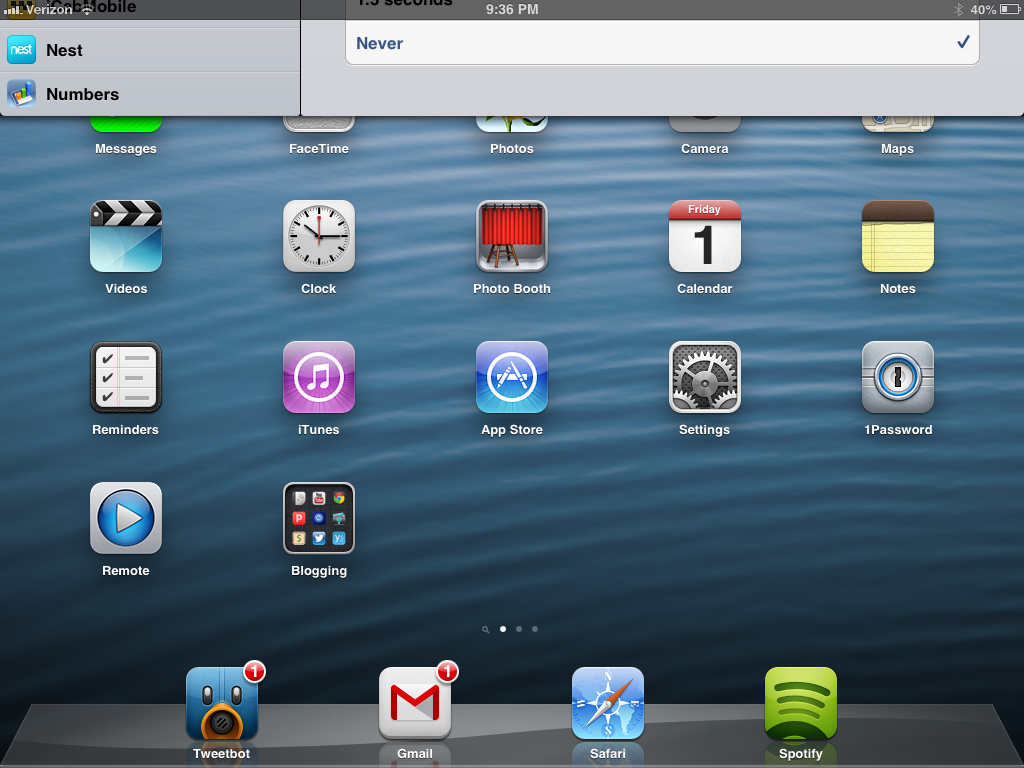 The iPad already includes some pretty cool built-in “Multitasking Gestures,” but Zephyr takes it to a whole new level. There are various one-finger gestures included here for ease of use. Along with that, there’s a sheer level of customization available that will have multi-touch fans salivating.
Price: $2.99
Zephyr direct Cydia link | Read more about Zephyr

That’s my full list of tweaks that I consider must-haves for the iPad running iOS 6. Was your favorite jailbreak tweak included or omitted? Do you agree, or disagree? Please let me know what you think in the comment section below.