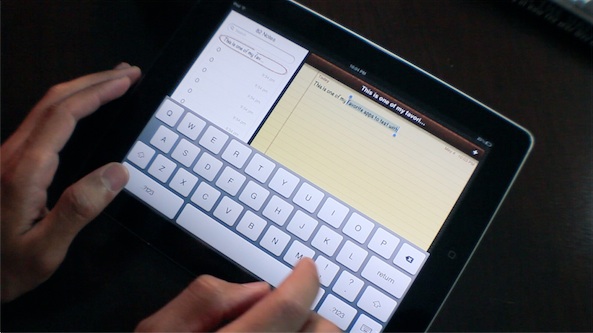 When Cody posted about Daniel Hooper’s iPad keyboard demo, we had no idea that it would be as popular as it has turned out to be. Thousands of retweets later, the public has spoken out against how terrible the iPad’s editing situation is. I think John Gruber summed it up best when he noted that the iPad was a great for typing, but poor for editing.

The iPad keyboard demo video was created with the hopes that Apple would respond and implement something similar in the upcoming version of iOS. There’s even instructions included on the video for submitting a bug report to Apple.

Well, Apple may not listen, but someone else did. Indeed, the jailbreak community has responded in a big way. Introducing SwipeSelection — a usable realization of the original iPad concept video…

Blogging has giving me the privilege to rub shoulders with all sorts of talented people in this industry, including various App Store and Cydia developers. Perhaps none are as quick on the draw to turn an idea into a reality as developer, Kyle Howells.

When I created my iPad Multitasking concept video, it was none other than Kyle who approached me with a possible solution. About 10 minutes later I had a working mockup. This guy has some immense talent, and the speed to go along with it.

Just like before, Howells has created a jailbreak tweak for jailbroken iPads that imitates the original demo video to a tee. There’s precision one-finger editing, faster two finger editing, and selection capability by means of tapping the shift key prior to dragging a finger. It works pretty much exactly like you saw in Hooper’s video.

But it’s one thing to see a demo video, and a whole another thing to actually use a workable version of said concept. Let me tell you, this is what Apple needs to implement in iOS 6. It works extremely well, so much so, that I was totally used to it within minutes. SwipeSelection feels incredibly native, and perfectly natural.

Even better is the fact that Howells isn’t seeking to make any profit off of his concept realization. He plans to submit it to Cydia tomorrow, and will offer it free of charge to the jailbroken masses.

If you do any sort of writing on your iPad, you need SwipeSelection. After using it, your hatred for Apple’s gimped editing functionality will mutate into complete and utter disdain. You’ve been fairly warned.

Update: I’ve tried SwipeSelection on my iPhone, and it works there as well! The only issue is that there isn’t a shift key on the right side of the keyboard like there is on the iPad, so selecting text works better from left to right instead of from right to left. The single finger, and two finger drags work exactly like they do on the iPad, which makes text editing so much more intuitive.