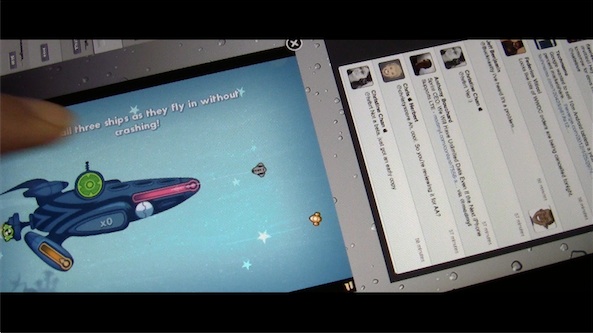 This isn’t exactly what I envisioned when I created a concept for MultiLayer iPad app functionality a few weeks ago, but it’s certainly a start.

After speaking at length with iOS developer Kyle Howells — the brains behind the awesome jailbreak tweak CardSwitcher — he graciously agreed to compile a specialized version of said tweak, which allows users to interface with multiple iPad apps on the same screen.

This means that it’s entirely feasible to play games while watching your Twitter timeline, or check your stock prices while browsing the web via Safari — all from the same iPad.

Running multiple apps on-screen simultaneously has been a dream of many iPad owners. We’ve seen similar concepts from Kyle in the past, so I’m confident that if anyone could pull this off, it would be him. Check inside for a demonstration video of the concept tweak in action…

Bear in mind that this is just a concept tweak to show off the potential of the idea. I had the tweak running on a jailbroken iPad 2, and it ran fairly smoothly. It would undoubtedly perform even better on the iPad 3, and the Retina display would be much more adequate when it comes to discerning small text from the reduced app windows.

Kyle has big ambitions when it’s all said and done; this is more of a proof of concept than anything else. We’ve witnessed similar ideas from other developers before, but after speaking to Kyle I think it’s entirely possible that he could be the first one to bring such an idea to fruition.

What do you think? Would you use a jailbreak tweak that allowed you to use multiple iPad apps simultaneously? Sound your opinion in the comments below.