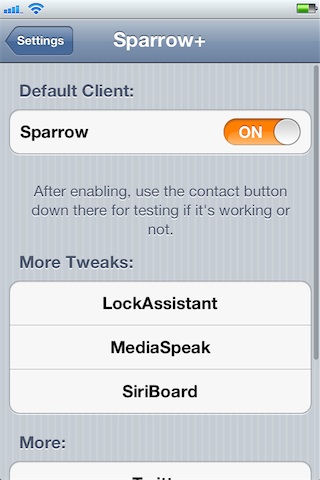 If you remember my Sparrow review, I said it was a great app that was marred by a few missing features — namely: push notification capability, and the ability to make Sparrow the default Mail app.

In due time the folks at Sparrow will undoubtedly solve the push notification issue, and a few enterprising iOS jailbreak devs have already taken the liberty on that issue as well.

One feature that’s not so easy to implement is making Sparrow iOS’ default mail client. In fact, unless Apple does a virtual 180 on its current stance, this will never be a feature of Sparrow, or any other 3rd party Email app for that matter.

The only hope to implement such functionality rests with the jailbreak community. In fact, I reached out to iOS developer Majd Alfhaily yesterday, and he graciously accepted my request for such a feature in his upcoming jailbreak tweak coined: Sparrow+.

Want to see it in action? Have a look…

We’ve seen Sparrow Push notifications before, and they work just as one would expect. In fact, rather than reinvent the wheel, Alfhaily uses Sparrow Push as a dependency for his tweak.

Since we’ve seen push notifications with Sparrow before, and we know that a solution is coming from Sparrow themselves in this regard, this feature takes a back burner to the much more important default mail app function. For me, that’s always been a deal breaker for me regarding Sparrow. As it stands, Sparrow can’t function as my default client if the Mail app is always opening whenever I tap a link to compose a new mail.

Fortunately for jailbroken iPhone users, Sparrow+ solves this problem. It’s not 100% perfect just yet, but it solves about 85% of the issue. Currently, it works like a charm when tapping mailto links from websites, from within apps, etc.

The only downside thus far is that it doesn’t play nice with iOS’ new mail sheet function. This causes features like the “Tell a Friend” button in the App Store app to remain reliant on the stock Mail client.

The good news is that the developer is actively working on making Sparrow+ work in every scenario imaginable, which would totally make one forget that the stock Mail app ever existed.

Do you use Sparrow currently? If not, does this tweak do enough to make you consider the switch? Let us know what you think about Sparrow+ in the comments below. It should be available for free on Cydia’s BigBoss repo in the very near future.

Sparrow can be downloaded from the App Store for $2.99.

Update: The Sparrow Push dependency has been removed, and now Sparrow+ performs all functions on its own.