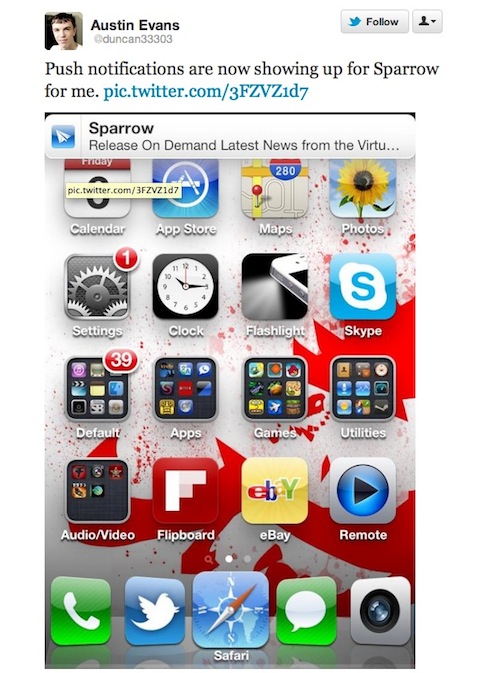 It looks like the folks at Sparrow have started to enable push notifications for a handful of users. Perhaps this is a part of a larger rollout?

YouTube personality Duncan33303 has reported that push notifications are now working on his 1.1 installation of Sparrow, as have others.

According to a blog post on Sparrow’s website, the push update was supposed to be available in the next released of Sparrow, that being version 1.2. It appears, however, that the developers of the highly popular Mail app alternative may have included code in the 1.1 update to make push notifications work without the need for Apple’s approval…

As the developers alluded to on their blog post:

“Thanks to your amazing support, we feel confident that Apple might revise its position on the Push API. We’ll submit a version of Sparrow 1.2 including it. this might delay Sparrow 1.2 validation but we’re already working with some partners to include Push in future versions of Sparrow without needing Apple clearance. Push is coming. With or without Apple.”

…it looks like they’re at least testing the 3rd party push technology with some of their users. We’ve tried to see if we could replicate the push notifications, but we were unable to do so.

Prior to Sparrow’s release there was some concern that the app would be rejected by APple for duplicating existing core functionality. Those worries subsided after Sparrow made its way to the App Store back in mid-March.

Unfortunately, the release arrived on the App Store sans Push Notifications. This was due to Apple’s strict positioning on the usage of the Push API. Many have campaigned for Apple to change their stance on its usage, but Sparrow has acknowledged that if Apple doesn’t relent, they will take matters into their own hands.

In the meantime, you can check out our jailbreak how-to for enabling push notifications via a handy jailbreak tweak.

Are you receiving push notifications on your 1.1 Sparrow installation? Let us know if you are in the comments below.

You can read and watch our full review of Sparrow located here. One of our main gripes was the lack of push notifications. If Sparrow can solve this conundrum, then it would be hard not to recommend it over the stock Mail app.