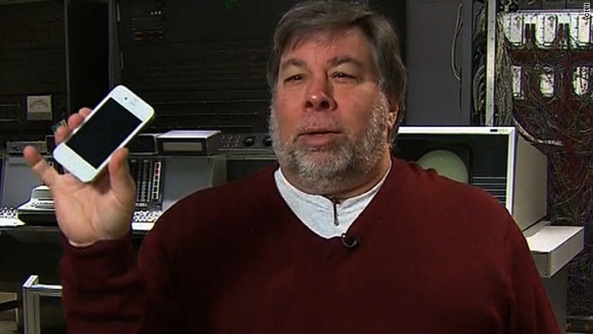 Steve Wozniak, who with his friend Steve Jobs co-founded Apple Computer on April 1, 1976 , always has interesting things to say about his company, competition and the technology industry at large. In an interview yesterday, the outspoken gadget lover expressed concern over patent wars.

He argued that patent-related litigation often blocks off start-ups and young thinkers because big boys make sure they own it all.

Wozniak, 61, gave an interview to The Australian Financial Review yesterday. He opined it’s too early to judge Tim Cook who was named the CEO of Apple after Steve Jobs announced his resignation on August 24, 2011.

It is hard to judge yet because Apple products still look like they did under Steve Jobs. Steve Jobs has stamped his mark on products that are three years in the queue. I want to see the special touches [under Cook], not just an iteration to the iPad 3.

Even though Woz stood in line for the new iPad, he  thinks the post-PC era that Apple is advocating doesn’t necessarily spell death sentence for desktop computers:

Although we are moving towards a very mobile world, I think there is going to be room for PCs for quite a long time still. For some work like audio or visual editing you need the complete machine and [a] larger screen. The mobile device is great for most of the things we do with our computer – but not everything.

The Wall Street Journal technology columnist Walt Mossberg confronted Steve Jobs with the same question at the D conference in 2010, to which Steve replied that he definitely sees tablets taking over more complex stuff, such as content creation, video editing and more.

Software and hardware evolve, Steve remarked, adding that “time takes care of a lot of this stuff”.

Speaking of patent wars, Woz reminded everyone that big companies such as Apple, Facebook, Twitter and Yahoo! were all started by new thinkers with bold new ideas who didn’t have to cope with patent lawyers as today’s start-ups do:

I care so much about the young person that has some technical knowledge and wants to start their own busines […] Now, with this big patent situation, there are certain categories that are heavily blocked off because the big companies make sure they own it all.

Wozniak is the original architect of the Apple I and Apple II computers in the mid-1970s. He is currently chief scientist for storage startup Fusion-io.

Wozniak and Jobs got their first taste of patent litigation back in 1977, when they realized RCA had already patented the design which translates letters into dots that could be put on a screen. They had to license that design for use in the 1977 Apple II system:

Only a huge company with vast sums of money could have afforded to do the research when they did, because you couldn’t make an affordable product that used that technology at the time. […] We actually wound up paying them two bucks for every computer we shipped just for that simple idea… That sort of thing is going to crop up over and over – very simple ideas that the big companies with big money are going to own, and the small guy who starts up is going to have to pay.

On Apple’s total control of its destiny:

The retail process is owned by Apple, the application is owned by Apple, the operating system is owned by Apple and the hardware is Apple’s. Apple has managed to create this entire world that all the products fit in to. There is no other company in the world that has these benefits. […] For example, HP is a big, successful company with so many different departments making servers, PCs and printers, but they are stuck with an operating system that isn’t under their control. For HP to build up the entire structure that Apple has would take them so long that Apple has a huge lead on everybody

I couldn’t agree more about this patent situation stifling innovation, even if it’s easy to overlook that Apple would have never become the consumer electronics powerhouse it is today if it weren’t for their unique patented technologies and solutions that set apart their products from the legions of me-too copycats.

I just wish they get over with this Android patent war so we can all move on and talk new products and ideas instead litigation.