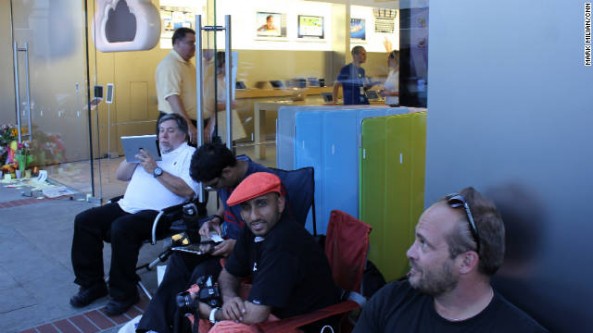 While Apple’s co-founder Steve Wozniak could probably stroll into Apple’s HQ in Cupertino to pick himself up an iPad, he’s made it very clear that he’d rather join in on the excitement and wait in line. Wozniak was first in line for the iPhone 4S this fall.

This time around isn’t any different. Wozniak has joined other enthusiastic Apple fans to wait for the new iPad to go on sale. It’s already hit the East Coast this morning, and will be available on the West Coast in about an hour.

Wozniak has been in line for the iPad since yesterday afternoon:

Whats Trending was able to get an interview with the Apple co-founder, who has never been camera shy. Woz admits that he wasn’t first in line, but that his wife was.

Woz played a key role in founding Apple and could probably obtain an iPad pretty easily if he wanted. However, Woz is a tech geek just like the rest of us, and loves to stand in line.

Woz and his wife are awaiting the new iPad’s launch at the Westfield Mall Apple store in Century City, Los Angeles with other brave Apple fans. Hey, maybe they’ll get Wozniak to sign their new iPad.

Did you brave the lines this morning?