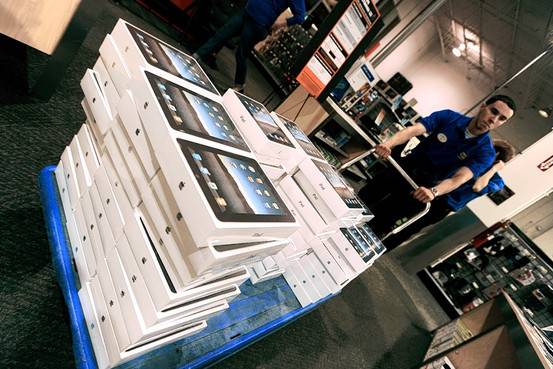 All signs are indicating that the iPad 3 will be announced in the first week of March at an event held by Apple in California. The iPad 3 is rumored to include some pretty impressive specs, including a quad-core processor and a ‘truly amazing‘ Retina display.

The big box retailer has already reduced iPad 2 prices by a cool $50, apparently to make way for the big number 3, and now we’ve gotten a note from a blue shirted tipster, saddling the slate (known here as the MCQSULL/A W) with a “Deleted” status. What you’re looking at is the entry for the white 32GB model, but we’re told other models have been similarly flagged. Granted, we know that this isn’t exactly a definitive statement on Best Buy’s part by any means, but it’s certainly been a harbinger of Apple product launches in the past.

Yesterday, we also reported that Best Buy has slashed the price of the iPad 2 by $50 for every variant, thus welcoming in the iPad 3.

Rumored specs for the iPad 3 include a Retina display, larger battery, upgraded cameras, and a quad-core processor. It’s also rumored to ship with iOS 5.1, which may carry Siri support on the iPad and a new rich text editor.

An interesting leak came our way today from a Chinese social network, saying the iPad 3 may see a $70-$80 price hike, compared to older versions of the iPad. A price hike certainly doesn’t seem like an Apple move — considering it’s kept prices consistent over the years — but could hold some truth considering the higher specs.

Nonetheless, all of these rumors should be cleared up soon — perhaps March 7th. Best Buy pulling the iPad 2 from its shelves certainly points to it.