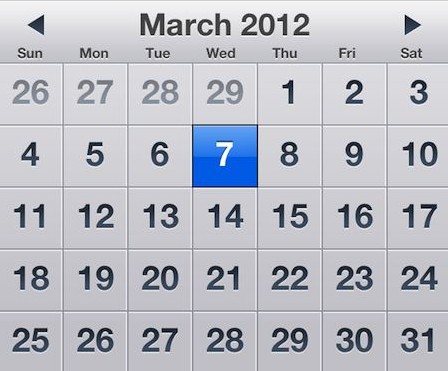 We’ve heard a couple of theories over the last few months regarding when Apple would finally unveil its next-generation tablet. Though earlier rumors suggested we could see the next iPad as early as February, most of the chatter now points to an early March launch.

This afternoon iMore weighed in on the tablet gossip, pinpointing March 7th as the date Apple will hold its event, and echoing previous reports of the slate’s expected feature set…

According to their sources, iMore is reporting that Apple’s iPad event is set for March 7th. The site also says it has confirmed that the new tablet will sport a quad-core A6 processor and a new 2048×1536 Retina display, which have both been rumored to be iPad 3 features for months.

While we were a bit skeptical on the March 7th date at first, LoopInsight‘s Jim Dalrymple has added some serious weight to iMore’s claim. The ex-MacWorld editor has indicated that he is also hearing that Apple’s iPad event will take place on Wednesday, March 7th.

Given that the date also lines up with AllThingsD’s ‘first week of March’ report, it looks like we are only about three weeks away from seeing Apple’s new tablet. Here’s hoping that the Retina display and LTE rumors actually materialize.