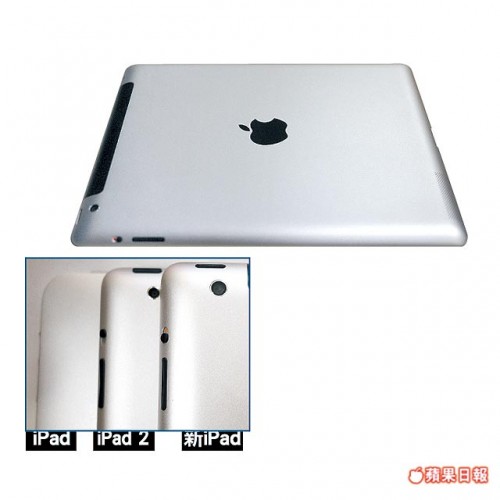 There have been plenty of rumors surrounding iPad 3 specs and launch date. The iPad 3 is rumored to have a Retina display, upgraded cameras, LTE, possibility of Siri, and a quad-core processor. Apple is rumored to announce the iPad 3 on March 7th, and ship it a few days later.

Tonight, Apple Daily has leaked some pretty interesting pictures of what they say is the iPad 3. They have posted a supposed over-head image of the iPad 3, revealing slightly more tapered edges and redesigned camera…

Apply Daily has also posted a picture of the first-gen iPad, iPad 2, and supposed iPad 3 side-by-side. You can tell the slight difference between the iPad 3 and iPad 2, specifically around the edges and camera.

What’s interesting about the leaked photos is there is no Apple markings besides the Apple logo itself. The images do look to match up with already leaked cases, however.

Apple has also reportedly been pushing select developers to finish their iOS apps, so Apple can demo them on stage during the iPad 3 announcement and in iPad 3 commercials.

At any rate, the iPad 3 announcement doesn’t appear to be that far off.

What do you think of tonight’s leaked images?