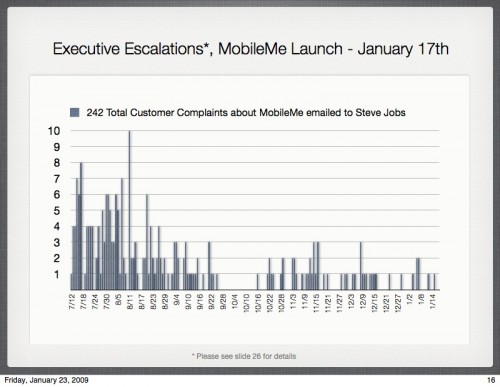 You didn’t think Steve Jobs was the only one at Apple keeping an eye on his publicly available email address, did you?

Now that Apple’s long-time chief has resigned, many are wondering if new CEO Tim Cook would carry on the tradition of answering emails from the public. An interesting story from MacRumors suggests that Cook is indeed answering emails from his tcook@apple.com address citing the story we posted a couple days back. There have also apparently been a number of other responses received from Cook in the days following his promotion…

However, the real interesting aspect of the story is the internal document above that shows how a team at Apple analyzed emails to Jobs over a specified time period and collected 242 complaints related to the MobileMe launch in 2008. This gives a ton of insight into how these emails to execs are being handled and proves that our complaints to Apple employees as high up as Jobs and Cook may not go unnoticed.

Does it surprise you to learn that there’s a team of employees at Apple analyzing emails to execs?

Would you like to see Tim Cook carry on Steves tradition of answering fan/user emails?

Does it even matter?