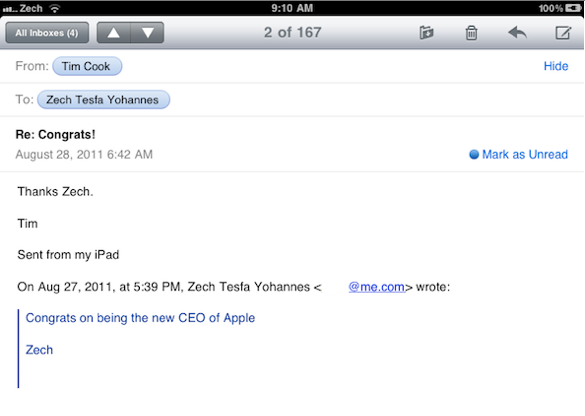 Tim Cook, Apple’s new CEO, has been the center of attention recently. Tim has reportedly began replying to user emails. I emailed Tim myself, and I got a response within three days.

Steve Jobs is known for occasionally responding to emails, and Tim has started doing the same. I emailed Tim congratulating him on his recent position of CEO at Apple…

I wasn’t expecting a reply from Tim, especially because it was a short email.

This is what I said to Tim when I congratulated him:

Congrats on being the new CEO of Apple

Lo and behold, he responds a couple of days later. I got a short and simple response, much like how Steve Jobs was known to reply.

Sent from my iPad

It seems that Tim Cook has been sending emails to several other people, and the text of the email appears to be the same: Thanks [INSERT NAME].

If you’re interested in emailing Tim, you can email him at tcook@apple.com.

What do you think? Did you get a response from Tim? Leave it in the comments below.