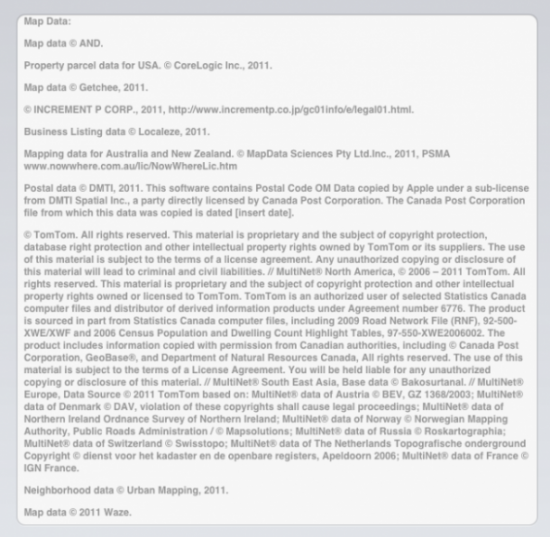 I have to admit, after all the evidence we’ve seen over the last several months, I was a little surprised that we didn’t see any kind of major improvements to the Map app in iOS 5. Apple has purchased multiple GPS software companies in the last few years, including PlaceBase and Poly9.

But even though there were no significant Map announcements at WWDC, there’s still hope. Apple’s developer’s conference only gave us a “sneak peak”  at 10 items from a list of over 200 improvements, so it’s very possible that we may still see Maps get a revamp this fall…

In fact, MacRumors has just uncovered information that further suggests that Apple has something up its sleeve for the outdated Maps application. The site was tipped off that the popular navigation software company, TomTom, was listed in a new “Maps Data” segment in the iOS 5 legal section.

As it turns out, there are several new companies listed in iOS 5’s legal notices, none of which appear to be related to Google’s own mapping licenses. The listed companies range from CoreLogic to Localeze, and all point to a much more appealing Maps app than what iOS currently offers.

Of course, all of this information does us little good until we actually see the product, which could be a ways off. You may recall that Google’s ex CEO Eric Schmidt recently announced that Google had renewed their search and Maps partnership with Apple.

What do you think? Will iOS 5 see an updated Maps application this fall?