Things got rather emotional in the #jailbreak section of the Sileo / Taurine / Odyssey Discord channel over the weekend after Odyssey Team lead developer CoolStar appeared to lay out a roadmap of their plans for the upcoming iOS & iPadOS 15 jailbreak, including what appeared to be a mention that it would be the final jailbreak that CoolStar contributes to.

CoolStar reaffirmed those comments in a series of Tweets shared late last night after the Discord comments mentioned how she had planned for the iOS & iPadOS 15 jailbreak, currently referred to as “Taurine15,” to support all versions of iOS & iPadOS 15.x on A8-A11 devices, but only iOS & iPadOS 15.0-15.1.1 on A12 and newer-equipped devices.

For those unfamiliar, CoolStar’s Discord comments are shown below: 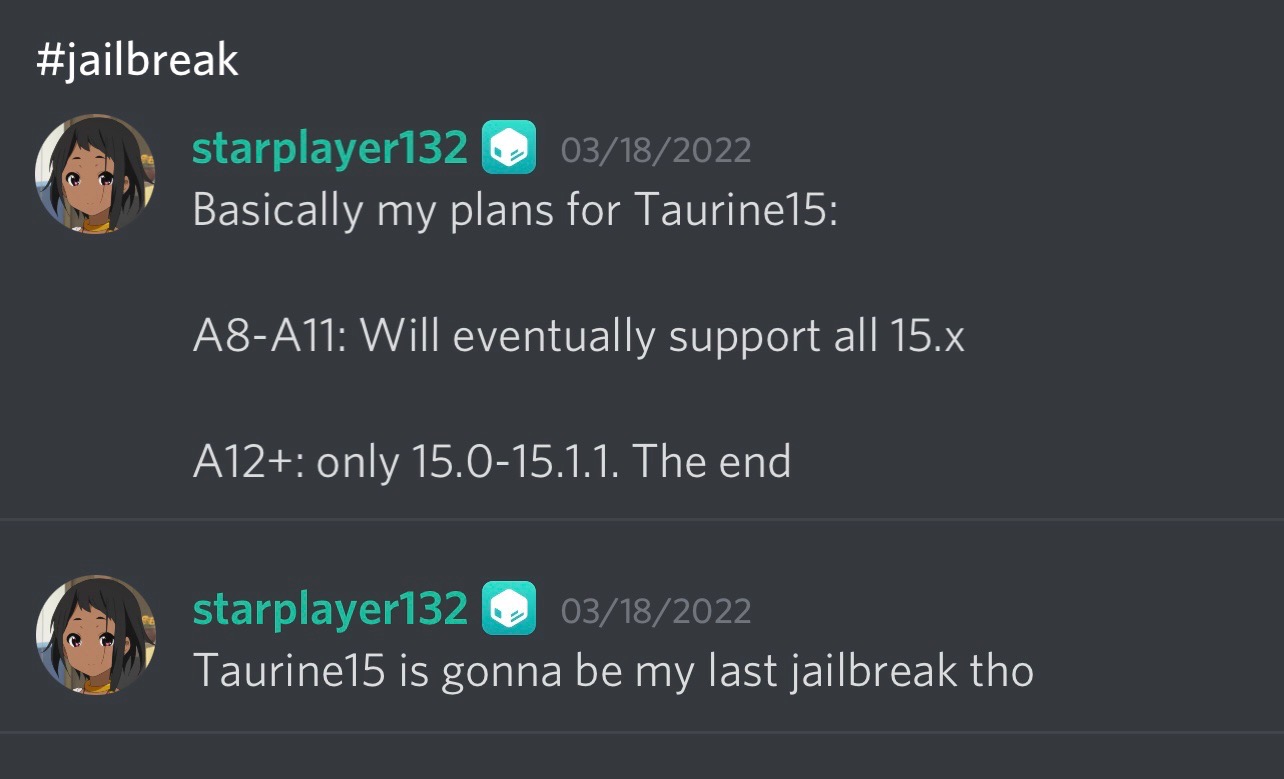 CoolStar said she has benefitted from jailbreaking their personal device thanks to at least four different jailbreak tweaks, and that going stock after this final jailbreak would be a learning curve. CoolStar plans to preserve at least a few devices on iOS 15.1 as personal mementos of her time creating jailbreaks.

CoolStar also said that her intention to stop developing jailbreaks includes plans to open source Odyssey, Taurine, and the upcoming iOS & iPadOS 15 jailbreak tool, as well as to run training sessions that may assist others in their efforts to maintain those jailbreaks after she stops.

The announcement wasn’t totally unexpected, as CoolStar has been increasingly vocal about the challenges associated jailbreaking A12 and newer-equipped devices on iOS & iPadOS 15. These challenges can be attributed to hardware mitigations that will make jailbreaking them particularly resource-hungry. For example, in one comment, CoolStar said doing so would require burning new techniques, potentially for each new version of iOS or iPadOS.

The same security mitigations aren’t present in A8-A11 devices, which makes them much easier to jailbreak on more versions of iOS & iPadOS 15. These devices are also susceptible to the hardware-based bootrom exploit that we all know as checkm8, which currently powers the checkra1n jailbreak tool.

As for the name “Taurine15,” we suspect based on the Odyssey Team’s history that this is only a temporary name being given to the project before its official release. CoolStar and the rest of the Odyssey Team commonly referred to the iOS & iPadOS 14-based Taurine jailbreak tool as “Odyssey14” before giving it its official name ahead of its release.

At iDownloadBlog, we’ve followed and reported on CoolStar’s developments for several years. Having said that, we offer our appreciation for everything she has contributed to the jailbreak community in that time.

As always, we will continue to keep our readers apprised of any updates surrounding the iOS & iPadOS 15 jailbreak.