There’s been no shortage of news updates and teasers from team unc0ver as Pwn20wnd works ever-so-carefully to integrate Brandon Azad’s oob_timestamp tfp0 exploit into the jailbreak tool. But while some of his Tweets have been more optimistic than others, one of those shared this Sunday afternoon is particularly exciting for those waiting for support on A12(X)-A13 devices.

Initially, Pwn20wnd had planned to support all versions of iOS 13.0-13.3 for all affected devices, but that tone changed on Saturday when the unc0ver lead developer noted that this wouldn’t be practical given all the work that it would necessitate and the fact that checkra1n already supports the bulk of those devices. Fortunately, those sporting A12(X)-A13 devices may still be able to look forward to such support: 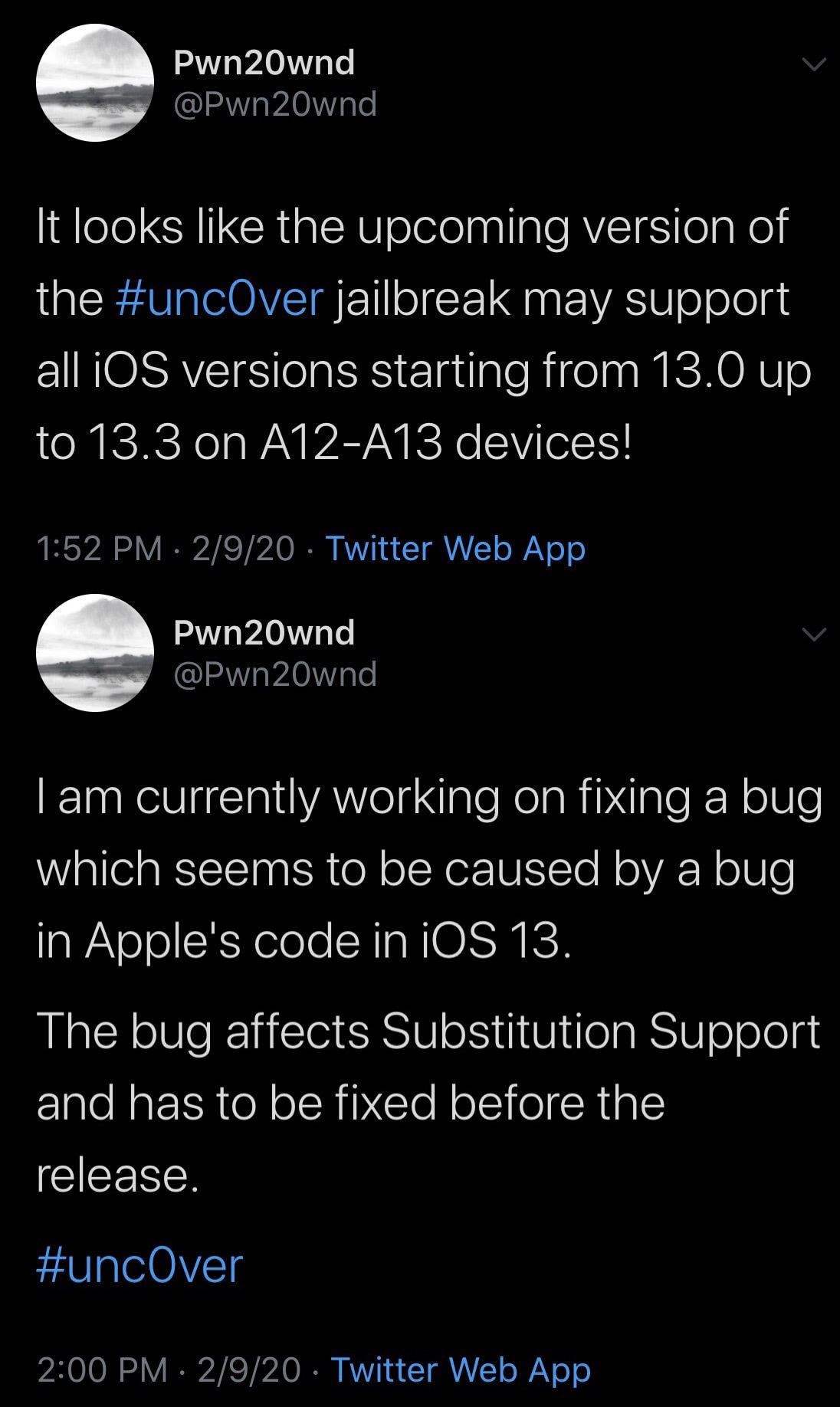 Pwn20wnd’s latest Tweets suggest that A12(X)-A13 device users may still expect to be able to jailbreak with unc0ver on all versions of iOS 13 from 13.0-13.3. This doesn’t include older devices, however.

It’s good news for some because it means preparing to jailbreak iOS 13 could require less effort, but it’s still not a bad idea to update to iOS 13.3 if you’re running an older version of iOS 13 because it’s still being signed at the time of this writing and because it sports the latest new features, bug fixes, and security improvements.

That aside, those who will inevitably miss the signing window despite all the warnings we’ve put out there may also benefit from Sunday’s announcement.

In a follow-up Tweet, Pwn20wnd mentions that he’s currently in the middle of fixing a bug caused by another bug in Apple’s own iOS 13 code. The unnamed bug allegedly impacts Substitution Support and needs to be fixed before unc0ver for iOS 13 can be released publicly.

Given what we know now, those who would still like to update to iOS 13.3 before Apple closes the signing window will want to do so as soon as possible. Apple is likely to stop signing iOS 13.3 sometime this week since iOS 13.3.1 was released more than a week ago.

As always, you can use the handy IPSW.me online utility to determine what firmware is or isn’t being signed for your device.

Are you happy that all iOS 13 versions could be supported by unc0ver on A12(X)-A13 devices after all? Share your thoughts in the comments below.