With the power of iOS automation, you can open a different app when you tap the app icon of another app. Confused? It’s pretty awesome and useful for several cases. 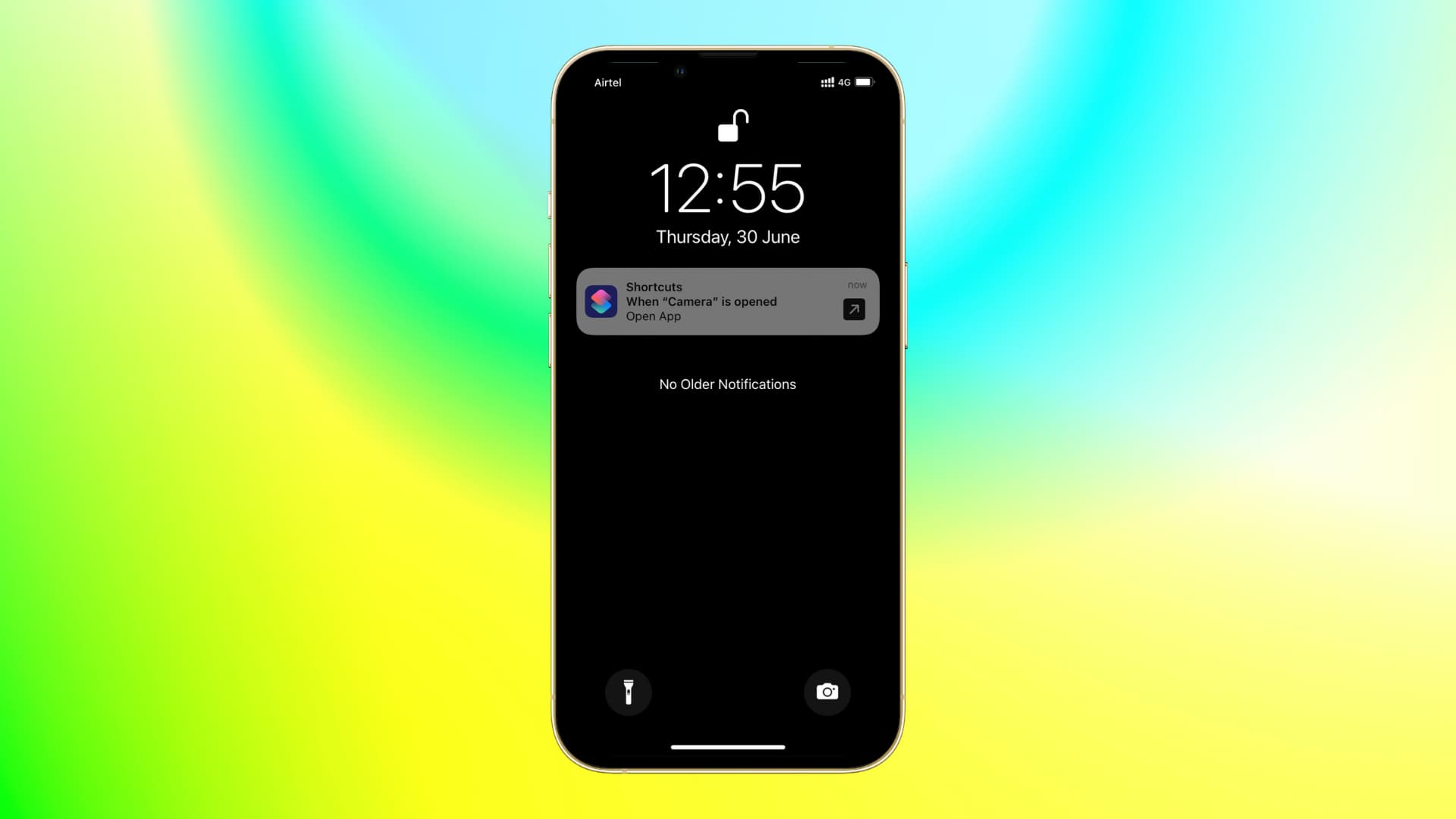 The built-in iPhone camera app is nice. But if you prefer a third-party camera app like Halide or FiLMiC Pro, you would like to open it from the Lock Screen, Control Center, and everywhere else. Using automation, you can configure that, and from now whenever you tap the stock camera icon, it will open that third-party app.

Suppose whenever your kid gets the iPad, they tap the YouTube app icon. You can use automation which will automatically open a homework app or a math app the moment your kid tries to open YouTube.

Next, let’s say you use an iPhone or iPad for business to show menu, create tickets, or book appointments. In this case, you can create automation to force all apps to open only a specific app. This way, if a person taps any other app on that work iPad or iPhone, it will automatically open your relevant business app. (Another method to achieve this objective is to use Guided Access.)

Personal Automation on iPhone and iPad

With app automation, you can easily modify your Lock Screen icons, and Control Center toggles so they launch another app you want when tapped. I mean, how cool is that? The key to that is setting up all-new automatic triggers in the Shortcuts app that fire off in the background based on your criteria, without you having to do anything at all.

As an example, with app automation, you could easily designate specific locations where your iPhone will enter Airplane or Do Not Disturb mode, like a movie theater you’ve been frequenting.

The following triggers are currently available:

We’re looking for a specific trigger that opens an app.

And what this trigger does is simply open another app of your choice whenever a specific app on your device is launched, be it through Search, the Dock, your Home Screen, Control Center, Notification Center, widgets, or your Lock Screen shortcuts.

How to use app automation on iPhone and iPad

We’ll create an automation to open Halide every time the stock Camera app is launched:

1) Open the Shortcuts app on your iPhone or iPad and tap Automation. 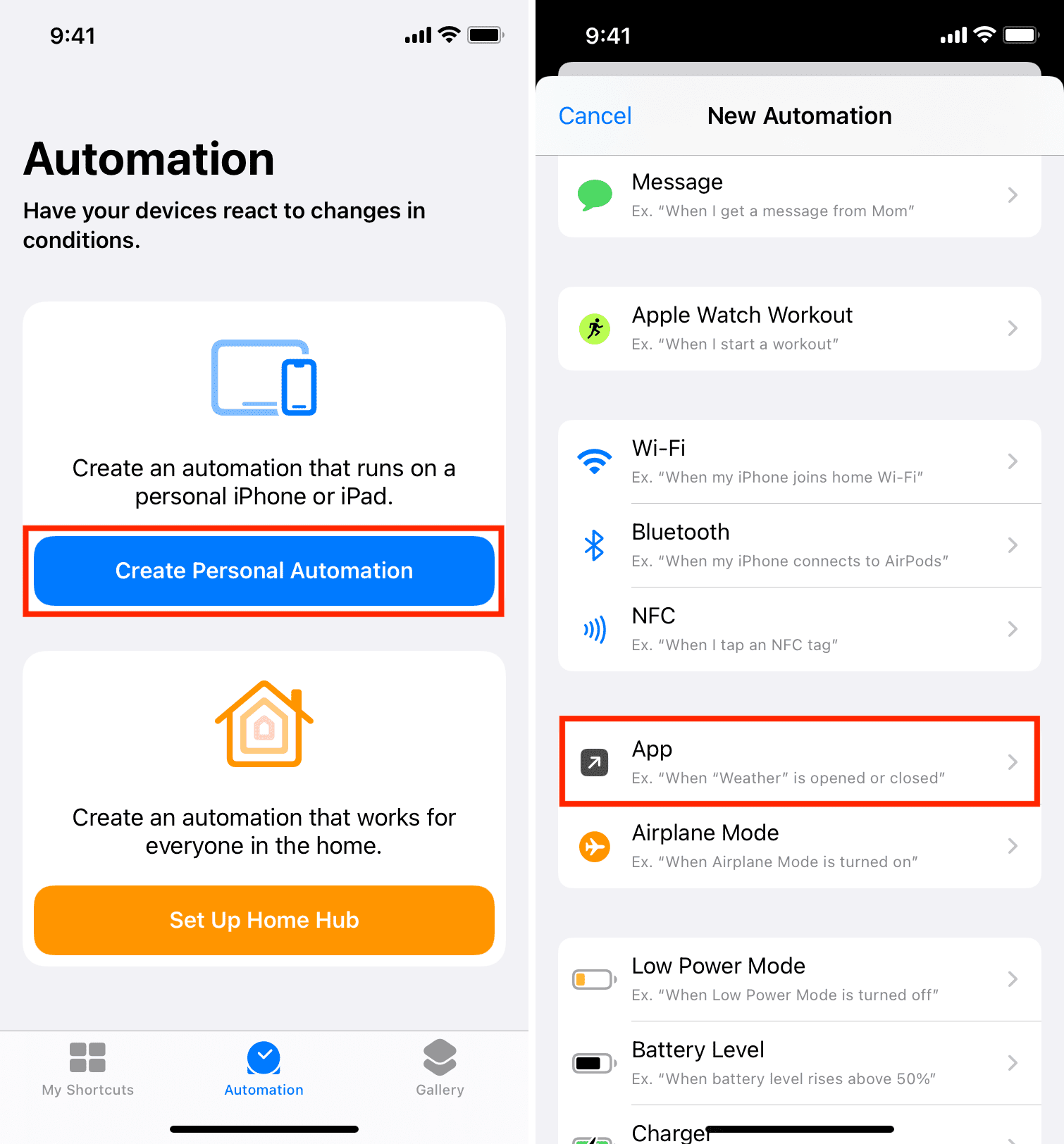 4) On the New Automation screen, hit Choose, select Camera, and hit Done to get back to the previous screen. 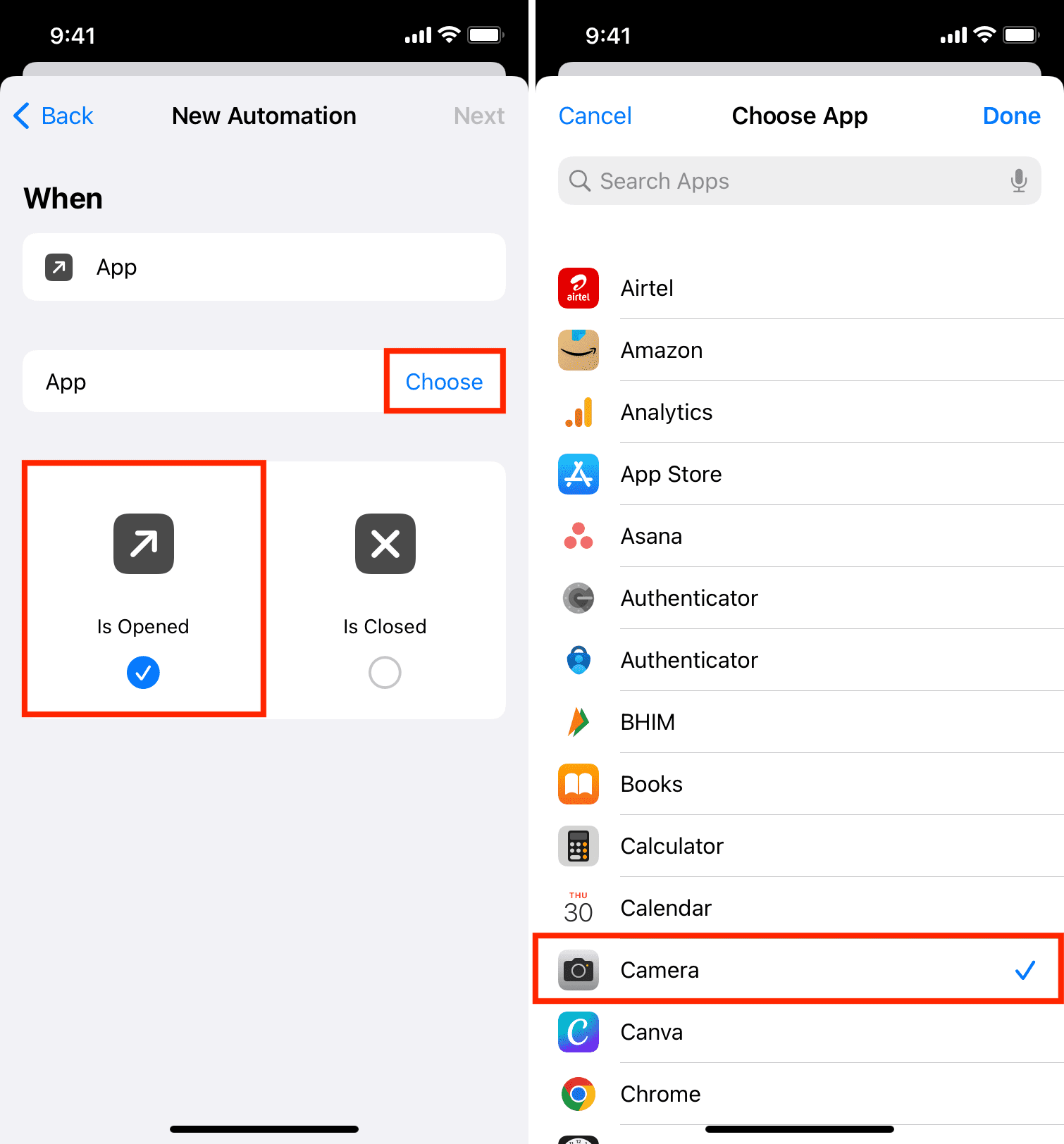 5) Tap Next to continue.

6) Tap Open App under Next Action Suggestions. If you don’t see it, tap Add Action or use the search bar to search for Open App and tap it. 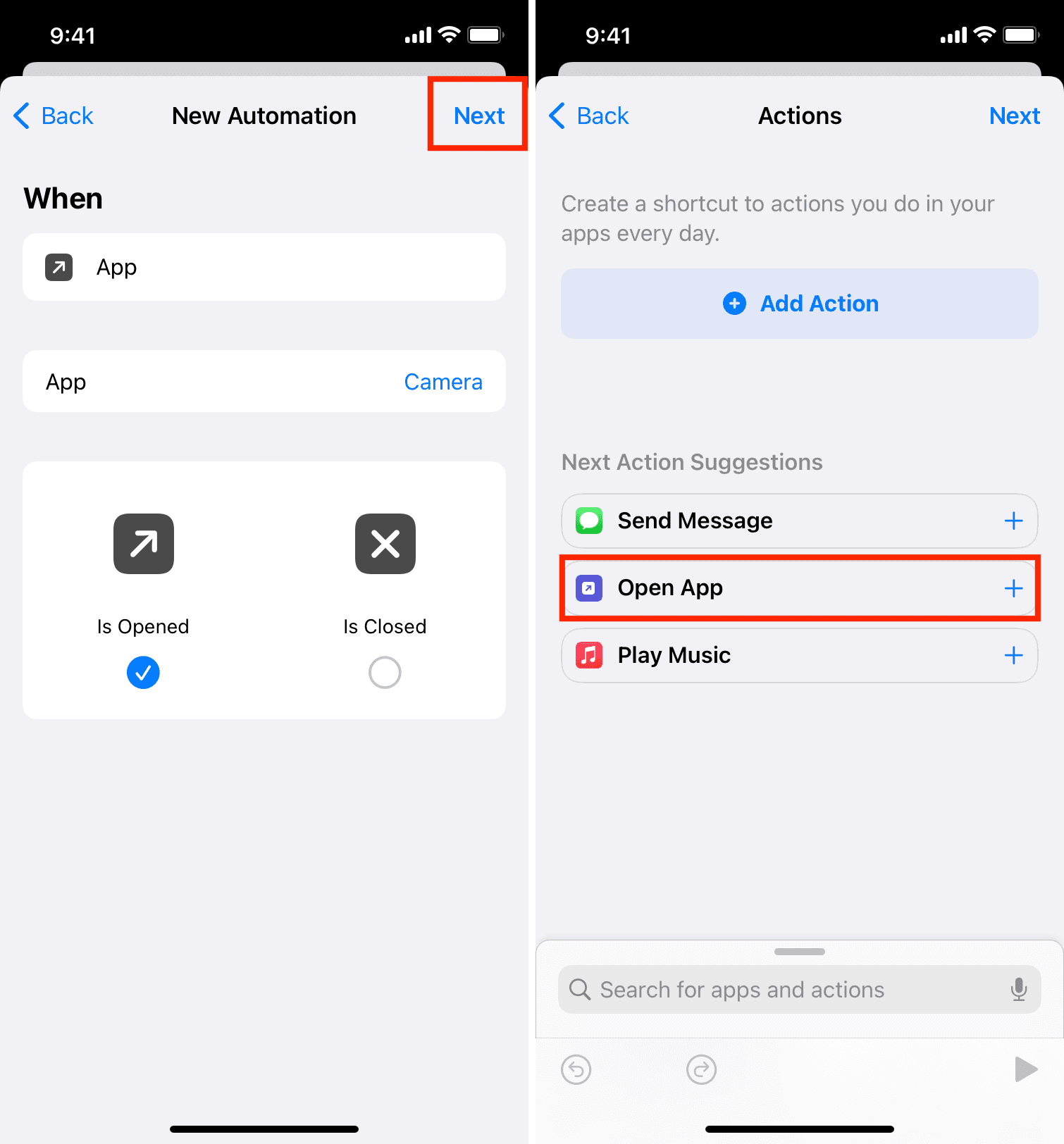 7) Tap the light blue word App in the Open App action and pick Halide or any desired app you’d like to open whenever the Camera is invoked. 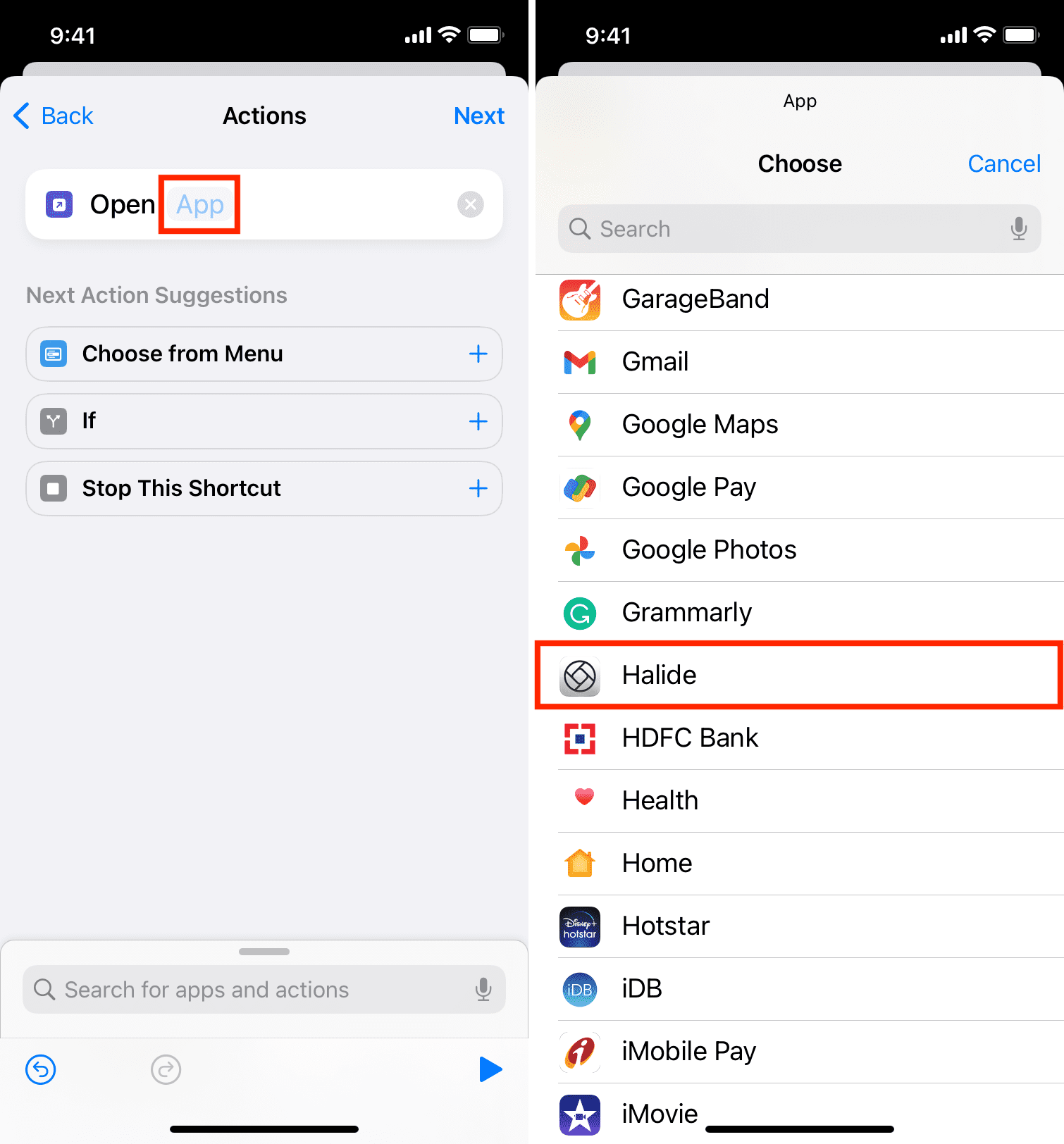 8) Tap Next to continue.

9) Because this is a silent action that requires absolutely no intervention on your part, toggle off Ask Before Running and confirm the choice by tapping Don’t Ask.

10) Review that everything looks good, then tap Done to finish creating this automation. 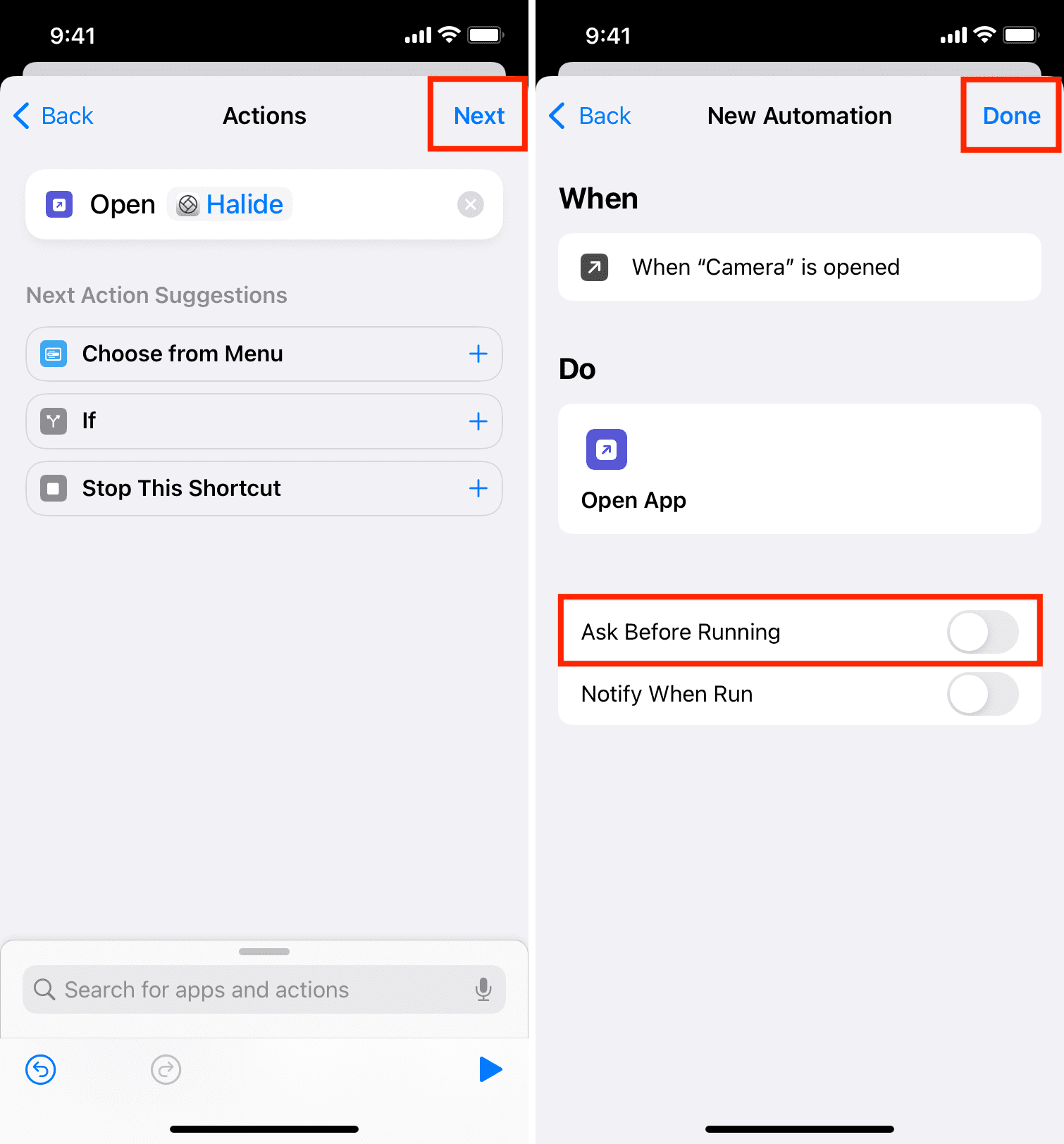 From now, as soon as you tap the Camera shortcut on the Lock Screen, Home Screen, App Library, Control Center, or anywhere else, it will invoke the automation and open Halide instead of the Camera app!

As mentioned, our automation kicks in regardless of how we launch the Camera app.

Maybe you launched the camera from the Dock, the Home Screen, or another shortcut. Or, perhaps you got there via the Camera toggle in Control Center. If an app has a tappable Today widget, tapping it will also execute any automation attached to that app. To reiterate, no matter how you open the app, iOS will execute the underlying automation, if any.

One thing to keep in mind is that app automations don’t replace stock apps with your favorite ones. What we’re doing here is simply creating an automation in the Shortcuts app, which tells our iPhone or iPad to launch a custom app when opening a stock app.

You can observe this by assigning an app like Halide to the Lock Screen’s Camera shortcut.

If you slowly swipe from right to left on the Lock Screen to get to the Camera app, the stock Camera interface will gradually reveal itself as you’re swiping on the Lock Screen, only to be replaced by the Halide interface as soon as the animation has ended.

As mentioned, the Open App trigger doesn’t discriminate based on how you open an app.

As a result, the app automations in the Shortcuts app can even be used to customize Control Center toggles so that they open your favorite rather than default apps. As noted by Reddit user “iBanks3”, this can be particularly empowering if you’ve created a complex multi-step shortcut script that you’d like to execute with a quick tap of a Control Center icon. 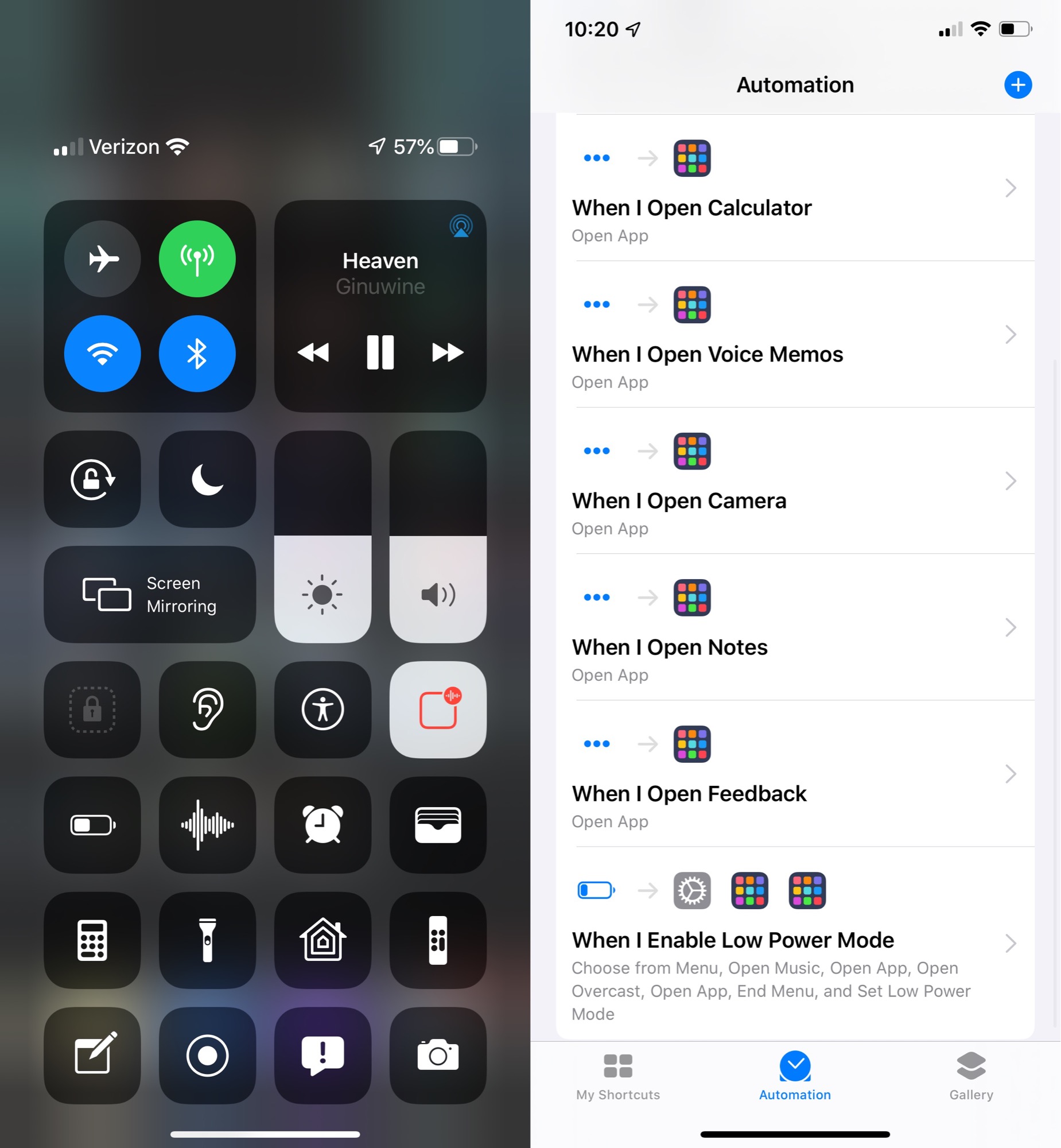 App automations can’t be assigned to Quick Actions on the Home Screen or in Control Center. For instance, if you press and hold the Camera icon to bring up the shortcuts menu, then select a shortcut like Record Video or Take Selfie, the Halide app will still open, but none these shortcuts for the Camera app will be remapped to similar actions in Halide.

Here are some of the more interesting Control Center modifications that the poster was able to create thanks to app automations and custom Shortcuts scripts.

The possibilities are virtually endless.