With a super useful feature called Guided Access, an iPhone, iPad or iPod touch can be put into so-called kiosk mode that temporarily restricts the device to a single app. It’s the ultimate iPhone and iPad lockdown feature, and it’s already built-in.

This tutorial discusses using Guided Access to control which app features are available to your children, what they can touch and interact with inside an app.

We’ll also detail other Guided Access capabilities allowing parents to shut down sensors, turn the hardware buttons off, disable areas of the screen where an accidental gesture might cause a distraction and more.

Guided Access works with any app that’s installed on your iOS device, including Apple’s own software. The feature packs in a comprehensive set of controls that let you do the following:

Guided Access on iPhone and iPad lets busy parents stop kids, or just about anyone for that matter, from accidentally clearing progress in games, sharing stuff online, posting to social media, deleting images and what not.

In Photos, for example, Guided Access can be taken advantage of to prevent your daughter from accessing filters. In Mail, use Guided Access to stop the Delete button from functioning. In Facebook, Guided Access can keep the little ones from posting unwanted photographs on your Facebook page.

You can even set it to restrict all touch input for the entire screen and turn off sensors to keep the device from switching between portrait and landscape mode, or from responding to any accidental motion.

Aside from keeping your kids from doing something you don’t want them to, Guided Access can be used to restrict public iOS devices or lock devices used by retail clerks in a specific app, such as Square Register.

To restrict what your children can do in an app, you’re advised to do the following:

Each of the aforementioned steps is covered thoroughly further down the article.

How to set up Guided Access on iPhone and iPad

2) Slide the Guided Access switch to the ON position to enable the feature. 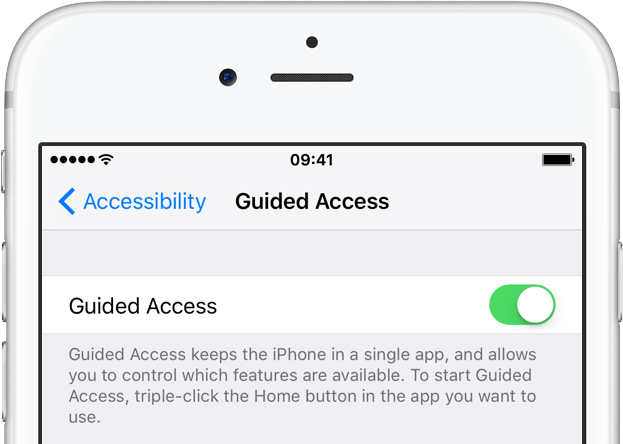 Tip: Ask Siri to “turn on Guided Access” while using an app. 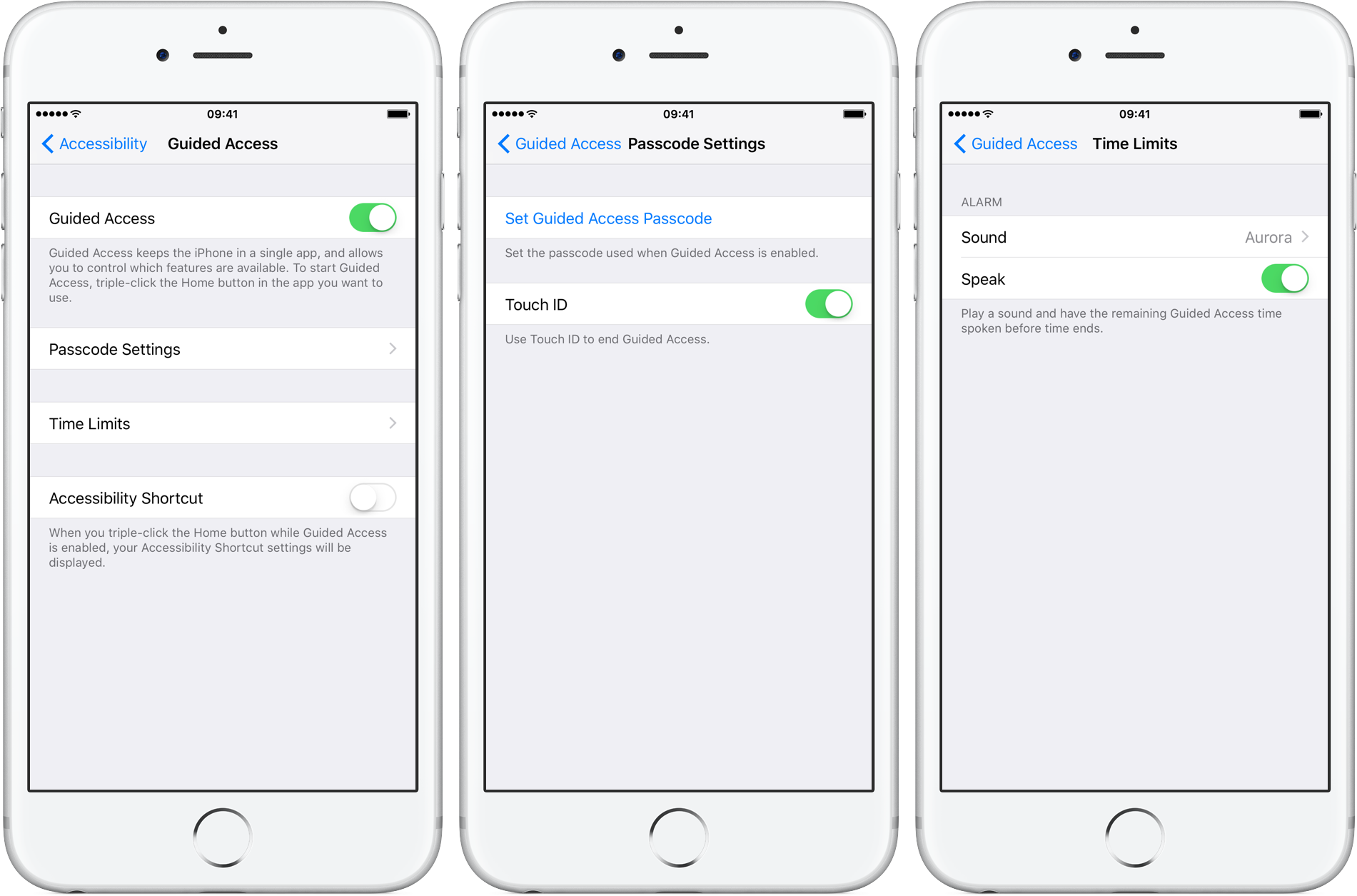 With Guided Access turned on and options adjusted, it’s time to see how it works.

How to enter and use Guided Access on iPhone and iPad

Once Guided Access has been turned on in Settings, do the following:

2) Triple-click the Home button to enter the session screen.

The currently active app zooms out a little to make room for additional controls.

3) Tap Options to pull up an overlay where you can turn off specific hardware buttons, sensors and touch screen or impose limitations on other features, like keyboard input and Dictionary Lookup:

4) Tap Done to save the changes and return to the previous screen.

5) To restrict app controls and disable specific areas of the app screen, draw a circle or rectangle around any part of the user interface you wish to stop from responding to touch input. iOS vectorizes the drawing which so you can drag the mask into position or use the handles to adjust its size.

For example, you may want to restrict actionable buttons inside the Photos app to prevent a mischievous junior from deleting your photos or applying unwanted edits. As these controls are found sitting alongside the screen bottom, simply mask them out with a few strokes of your finger and you’re done.

You can even stop everything on the screen from responding to touch, if you’d like.

6) Tap Start to start your session.

Any user interface elements and app areas you designated as not responding to touch input will be greyed out upon entering Guided Access on iPhone or iPad.

7) To end the currently running session, triple-click the Home button, enter your Guided Access passcode, then tap End in the upper right corner.

Tip: If your device has Touch ID and it’s enabled for Guided Access in Settings → General → Accessibility → Guided Access → Passcode Settings, click the Home button once to end the session.

Triple-clicking the Home button in an app that you previously used with Guided Access immediately starts the app, skipping the session options screen. A ”Guided Access Started” message flashes briefly as a confirmation.

Pause Guided Access at any time by triple-clicking the Home button.

You’re now back to the session options screen where you can further restrict or relax device/app features, circle additional areas of the app’s interface that you’d like to make inaccessible to kids and more.

After making your changes, tap Resume to continue the session.

It’s great for restricting some but not all parts of an app. You cannot disable specific areas of specific tabs/screens in an app, which doesn’t make it very useful for navigation-heavy and multi-screen apps. As an example of that, I went ahead and restricted all touch in the Netflix app, bar the My Playlists section. 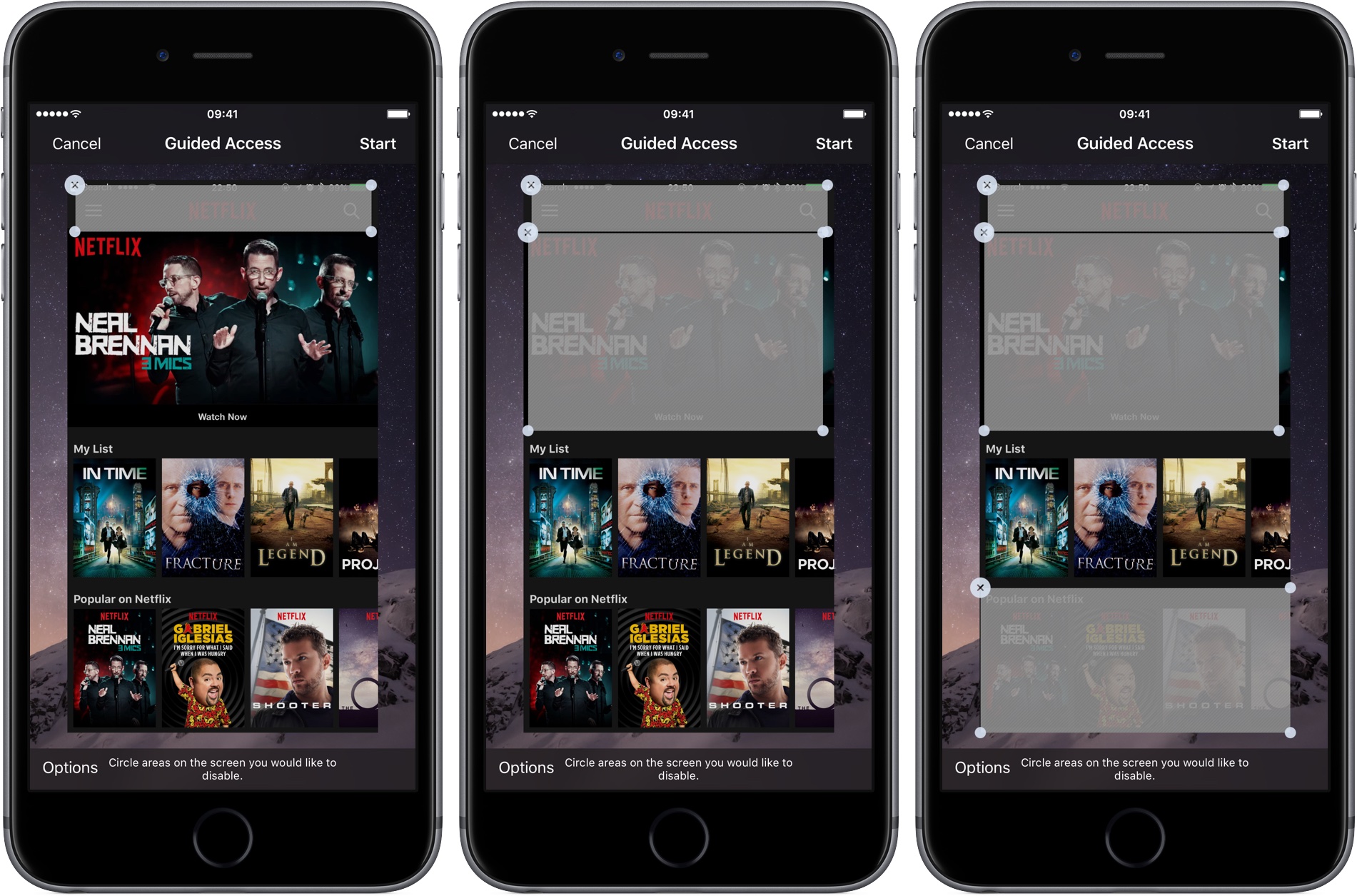 Since user-created masks are static and don’t move with content or between tabs/screens, my nephew quickly realized he could tap on whatever he wanted in Netflix for iOS just by scrolling content into a non-masked portion of the screen. 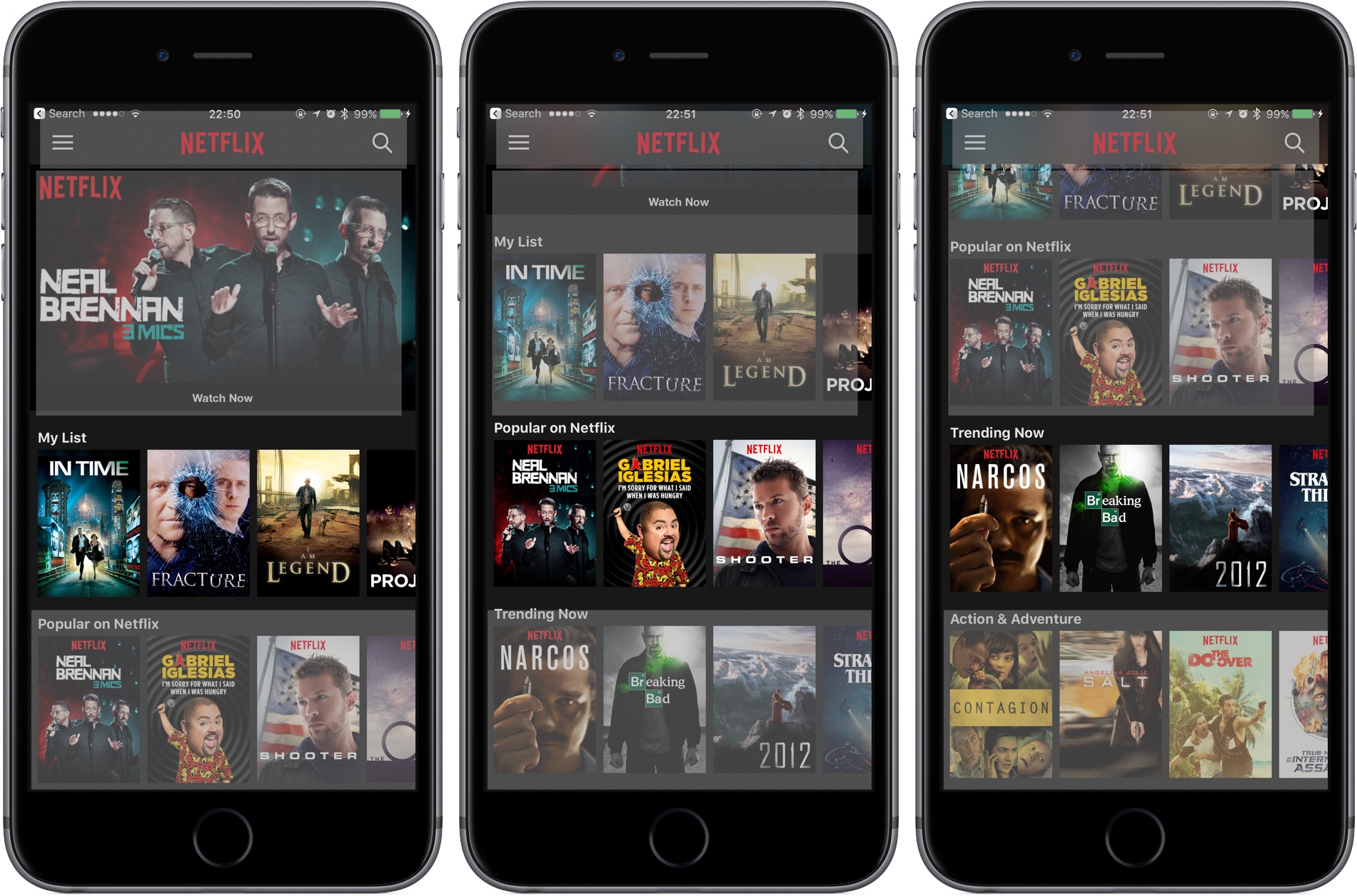 Guided Access does not work in the Settings app either.

You should augment Guided Access with the following steps:

It doesn’t hurt mentioning that iOS’s auto sleep timer, as defined in Settings → Display & Brightness → Auto-Lock, is disabled when you enter Guided Access.

In some instances, the device just shows a blank screen and prevents you from exiting Guided Access. This could be problematic because one cannot exit Guided Access in one’s Guided Access passcode has been forgotten. That said, do yourself a favor and enable the Touch ID option in Guided Access settings. 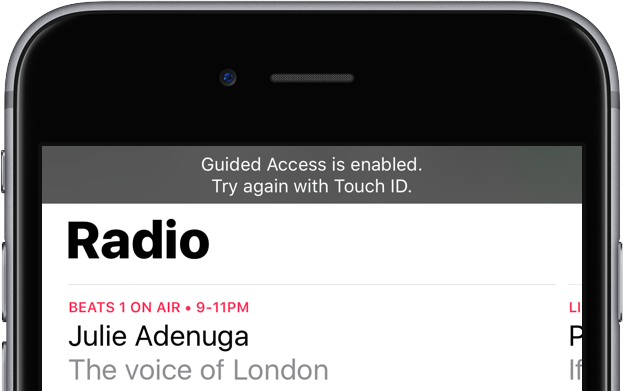 In an unfortunate case of losing your Guided Access password, force-restart your device two times in a row by holding the Home and Power buttons until you see an Apple logo. You should now be able to disable Guided Access in Settings. iPhone 7 owners, press the Sleep/Wake and volume down buttons to do a hard restart.

Forcing the device into recovery (DFU) mode should resolve it.

Guided Access on iPhone and iPad is an indispensable feature for devoting your device to a single task.

Parents who share their iOS gadgets with children should find Guided Access very helpful. And while we’d like to see more options, including designating areas of an app to be restricted from touch on a per-screen or per-tab basis, Guided Access in its current incarnation should help keep your easily distracted junior from posting pictures of his nose on your Facebook page.

Are you a fan of Guided Access on iPhone and iPad?

Have you tried this feature yet and what do you think of it? If not, block out 5 minutes of your time to play with Guided Access, then come back here and meet us in comments.

Have a great idea for a future tutorial? Don’t be shy! Send us your proposals, ideas and thoughts via tips@iDownloadBlog.com and we’ll kindly consider your submission.