The App Store’s virtual shelves carry dozens of dictionary apps but did you know that Apple offered a feature designed to make it easy for iPhone, iPod touch, and iPad owners to look up word definitions in a bunch of foreign languages?

Built-in dictionaries are available system-wide and work great as a general quick-reference tool so consider using them whenever possible. In this tutorial, we show you how to download and manage specific language dictionaries, use the Look Up feature and remove dictionaries you might no longer need in order to conserve storage space. 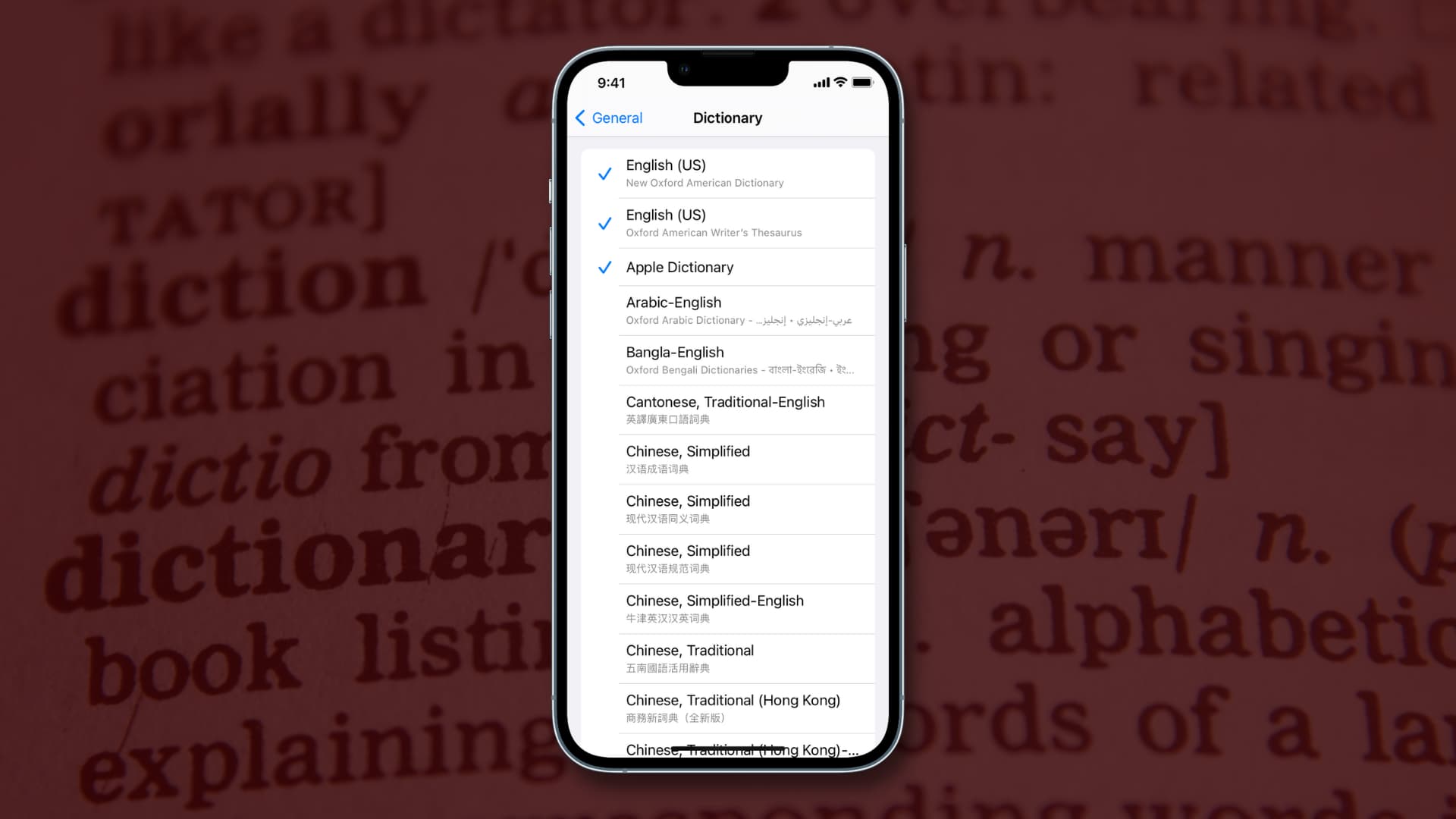 Dictionaries and definitions on iOS

Note that the dictionary is a feature of the software keyboard only.

If a dictionary file isn’t available locally on your iOS device and you try to define a word, you will be greeted with a “No definition found” message. If you experience issues when defining words on iOS, follow these steps to download dictionaries to your iPhone, iPad, or iPod touch.

How to add dictionaries to iPhone and iPad 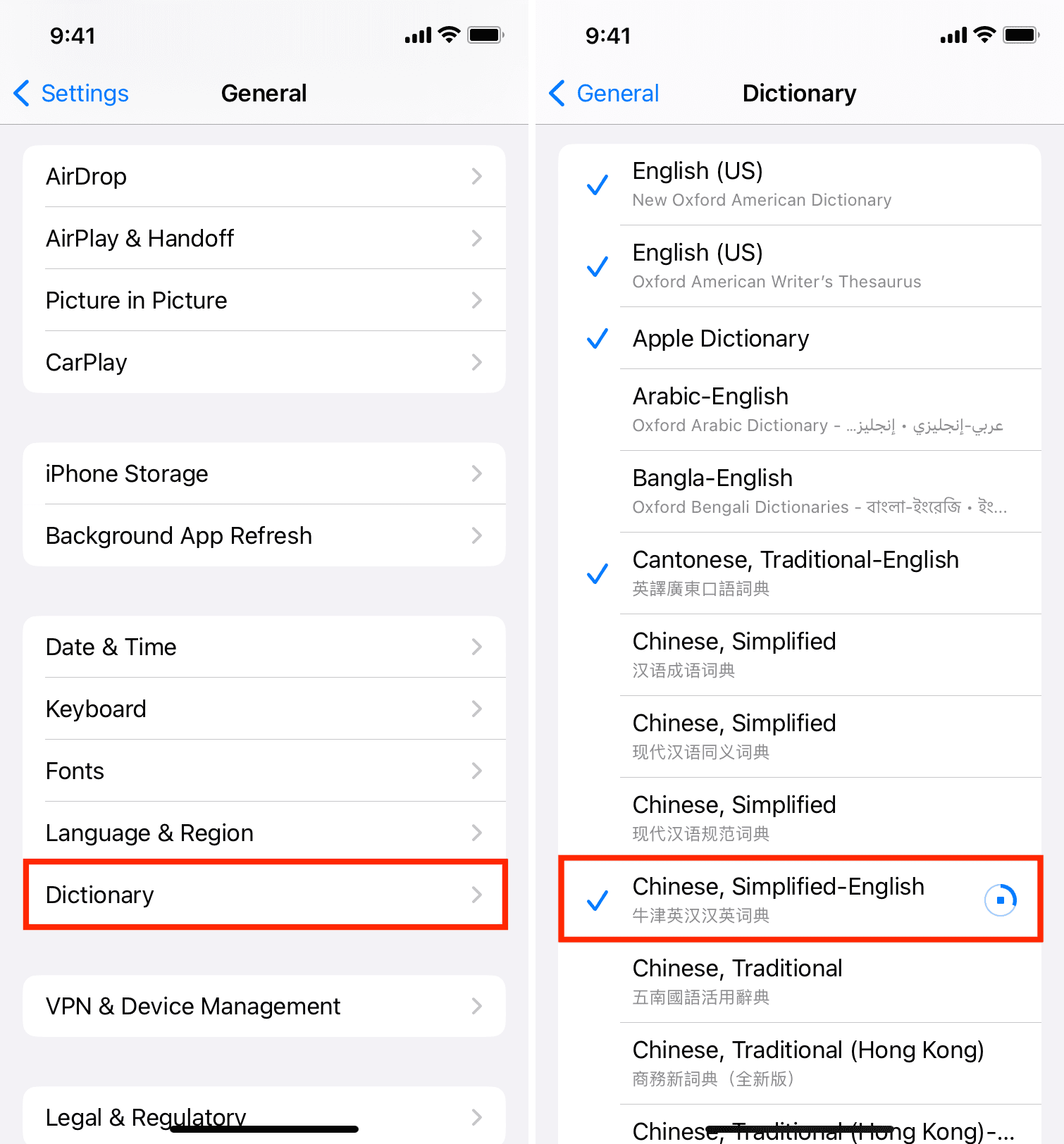 The circular progress bar indicates the download progress. As soon as the dictionaries have been downloaded to your device, you can start looking up word definitions in languages for which iOS has dictionary files available locally on the device.

How to remove dictionaries from iPhone and iPad

iOS dictionaries are not exactly storage hogs, but that doesn’t mean you cannot save some storage space on your iOS device by removing dictionaries that are no longer needed. Here’s how to do that: 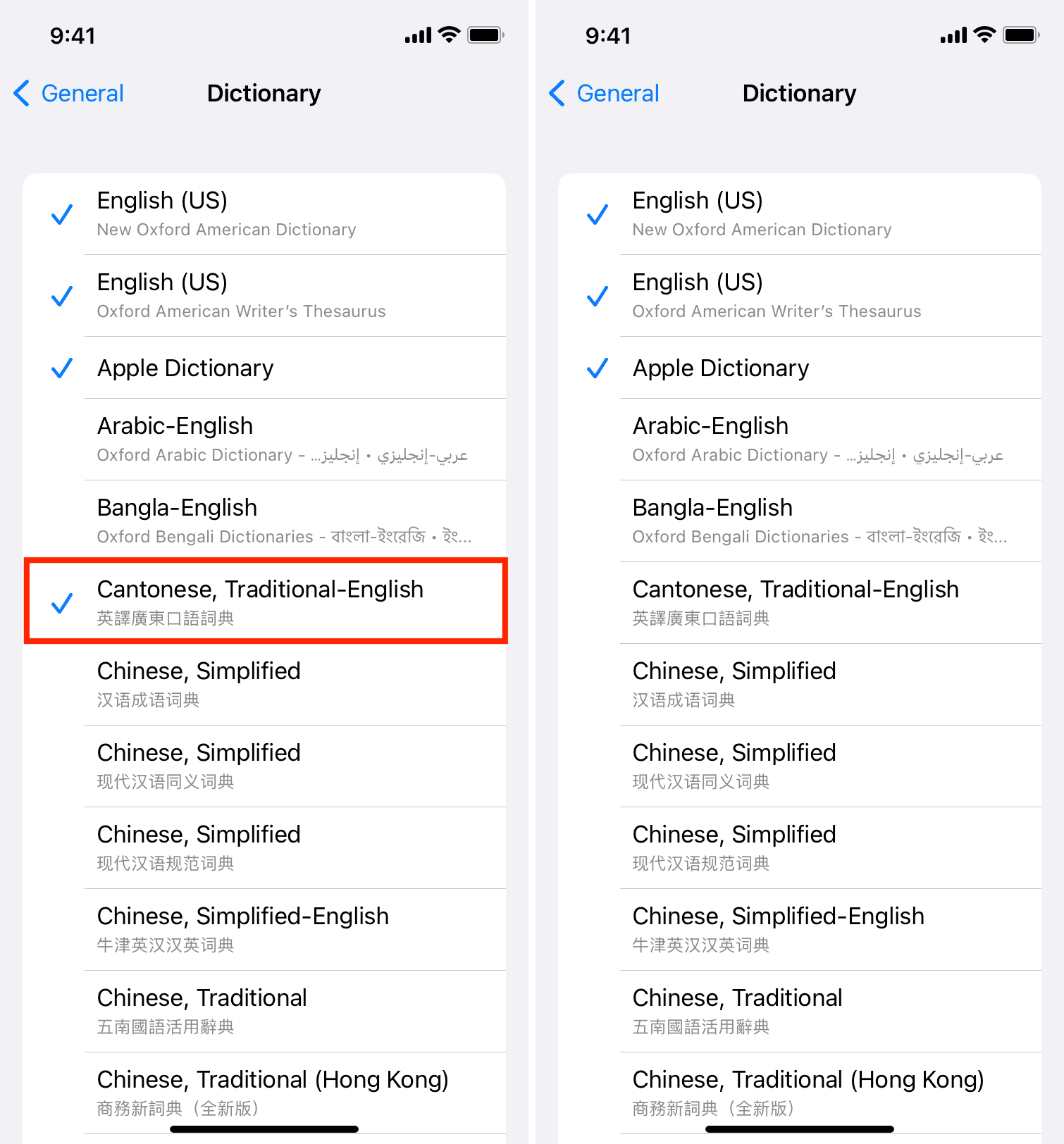 How to look up word definitions on iPhone and iPad

As mentioned, your iOS device must have at least one dictionary file available locally before you can define words. Since English is my primary language, I download various English (US) and English (UK) dictionaries. These cover almost every word that I come across while reading articles, browsing Twitter, and more.

Follow these steps to see the definition of a word on iPhone and iPad: 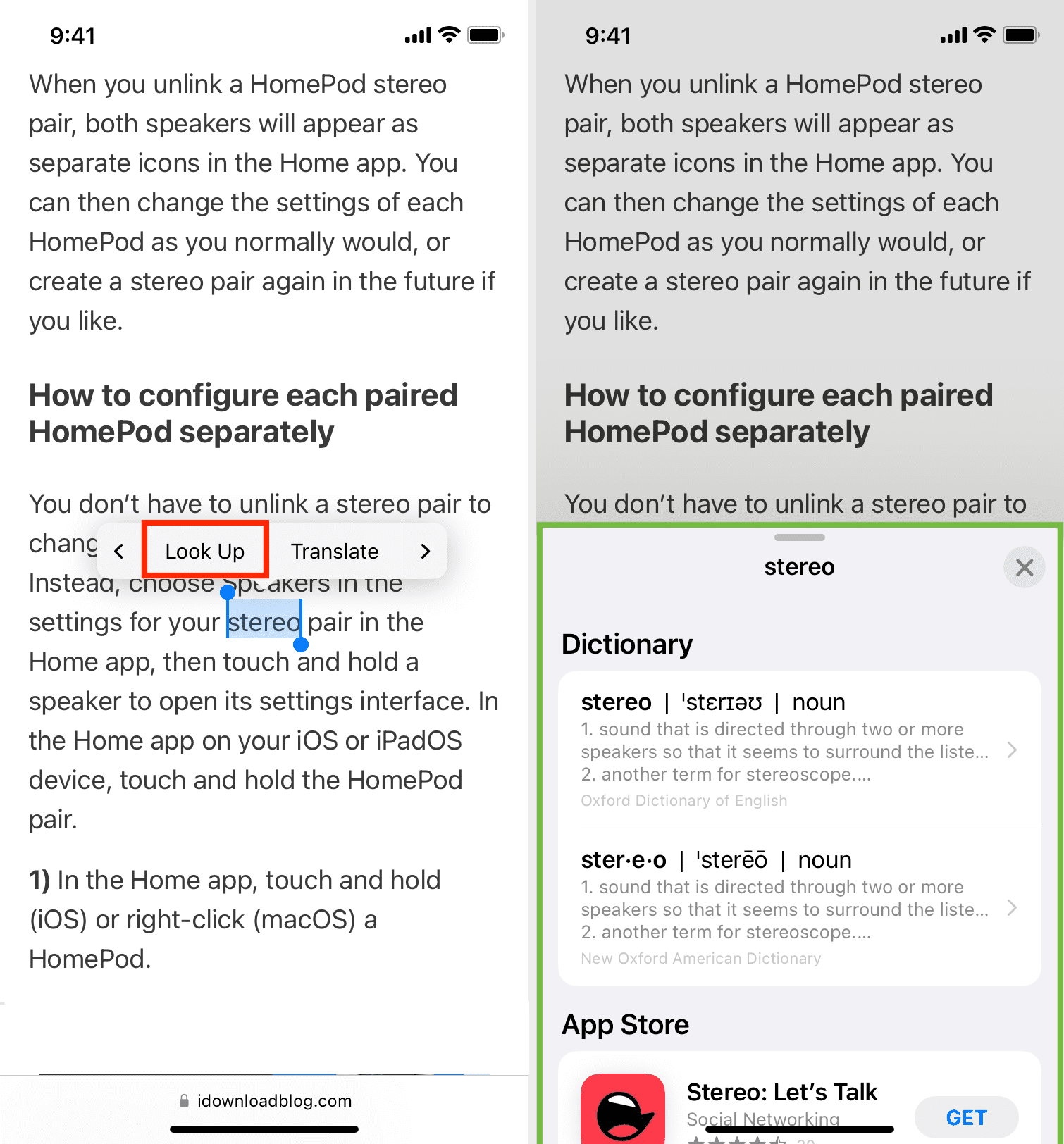 Bringing up a definition page for a word presents all kinds of information. You can tap on one of the entries to get more information about the word. In addition to the meaning of the word, you should also see examples of how to use it in a sentence and its origin, if possible.

If you downloaded more than one dictionary, multiple word definitions from other sources and in other languages will be presented here. For example, you can download foreign language dictionaries to translate foreign words into English.

Tip: To learn the pronunciation of foreign languages, you may want to enable Siri’s speak selection feature that reads the selected text out loud. Just open Settings on your device, navigate to Accessibility > Spoken Content and flip the switch next to the Speak Selection feature to the ON position. A Speak button should now appear when you select text in apps. With this feature, you can also get your iPhone or iPad to read whole iBooks to you, for example. And should you select the Highlight Content option, iOS will highlight words as they are spoken.

The iPhone, iPod touch, and iPad devices can download dictionaries available in the following languages:

Future iOS releases might include dictionaries for additional languages.

Other ways to define words on iOS

In addition to the built-in Look Up feature, there are other ways of defining words on iOS that don’t require manual dictionary downloads, including the following:

You can swipe down and type a word to quickly see its meaning. This tutorial shows you how to do that in detail. 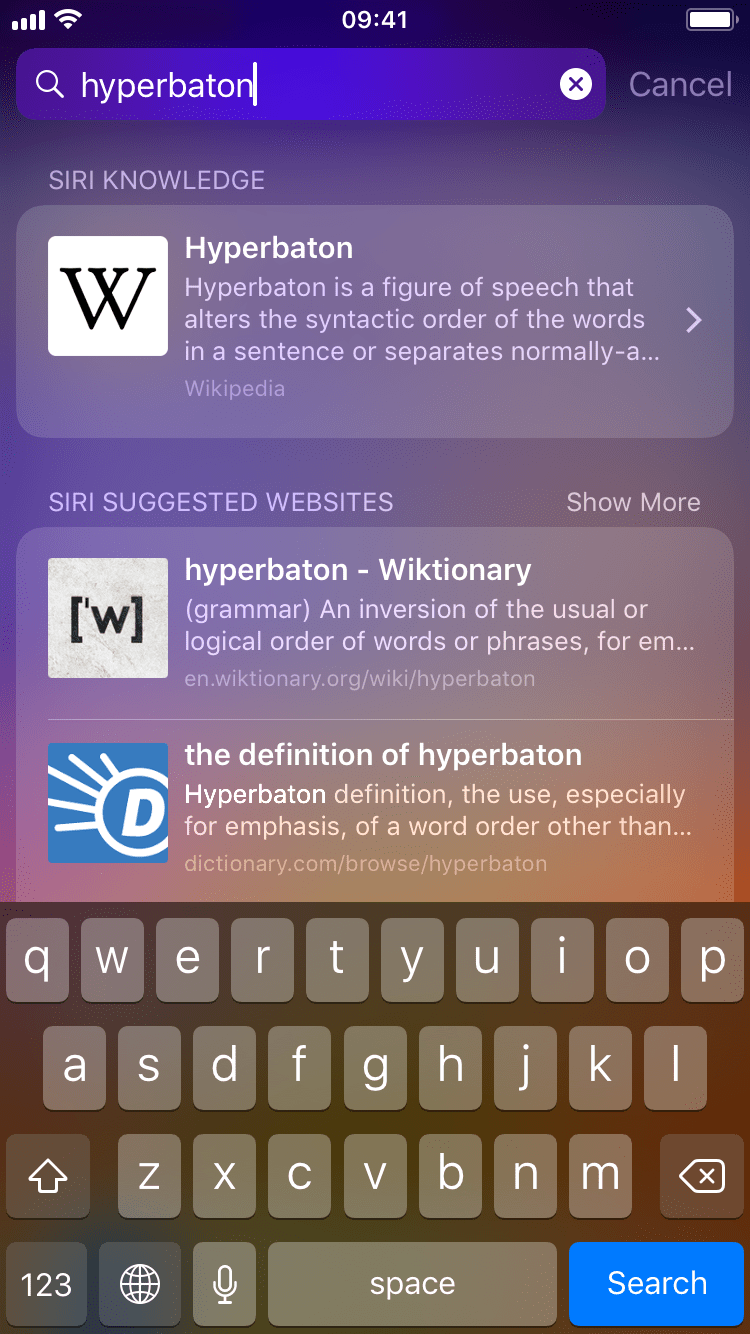 If your device has an Internet connection, you can either use Google’s native application for the iPhone, iPod touch, and iPad, or simply visit Google.com in Safari and type “define” followed by a word you wish to look up the definition for. Sometimes you can just type a word and have Google automatically define it for you.

The App Store is packed to the gills with various applications for research and reference, including dedicated dictionary apps. We highlighted some of the best dictionary apps for the iPhone, iPod touch, and iPad, but you can always check for new ones by firing up the App Store on your device to search for dictionary.

Benefits of using built-in dictionaries on iPhone and iPad

While third-party dictionary apps get the job done, their word definitions are rarely available in other apps via Share Sheet actions. It may be, therefore, far easier to use iOS’s built-in Look Up feature to look up word definitions.

Unlike most dictionary apps, iOS’s dictionaries are available system-wide in almost any application that supports text selection and can be accessed quickly with a single tap.

In addition, once iOS dictionaries are stored locally on an iOS device, you can define words in apps without an Internet connection, unlike the Google Search method.

A major downside to using iOS dictionaries is the need to manually download the dictionary. But then again, a third-party dictionary app must be downloaded, too.

Devices with iOS 8.1.3 and later offer configuration profile options for system administrators to restrict access to spelling and definition features on supervised devices. Other features that can be restricted via configuration profiles include definition look-up for highlighted words, spell check and autocorrection while typing, and Apple’s predictive keyboard.