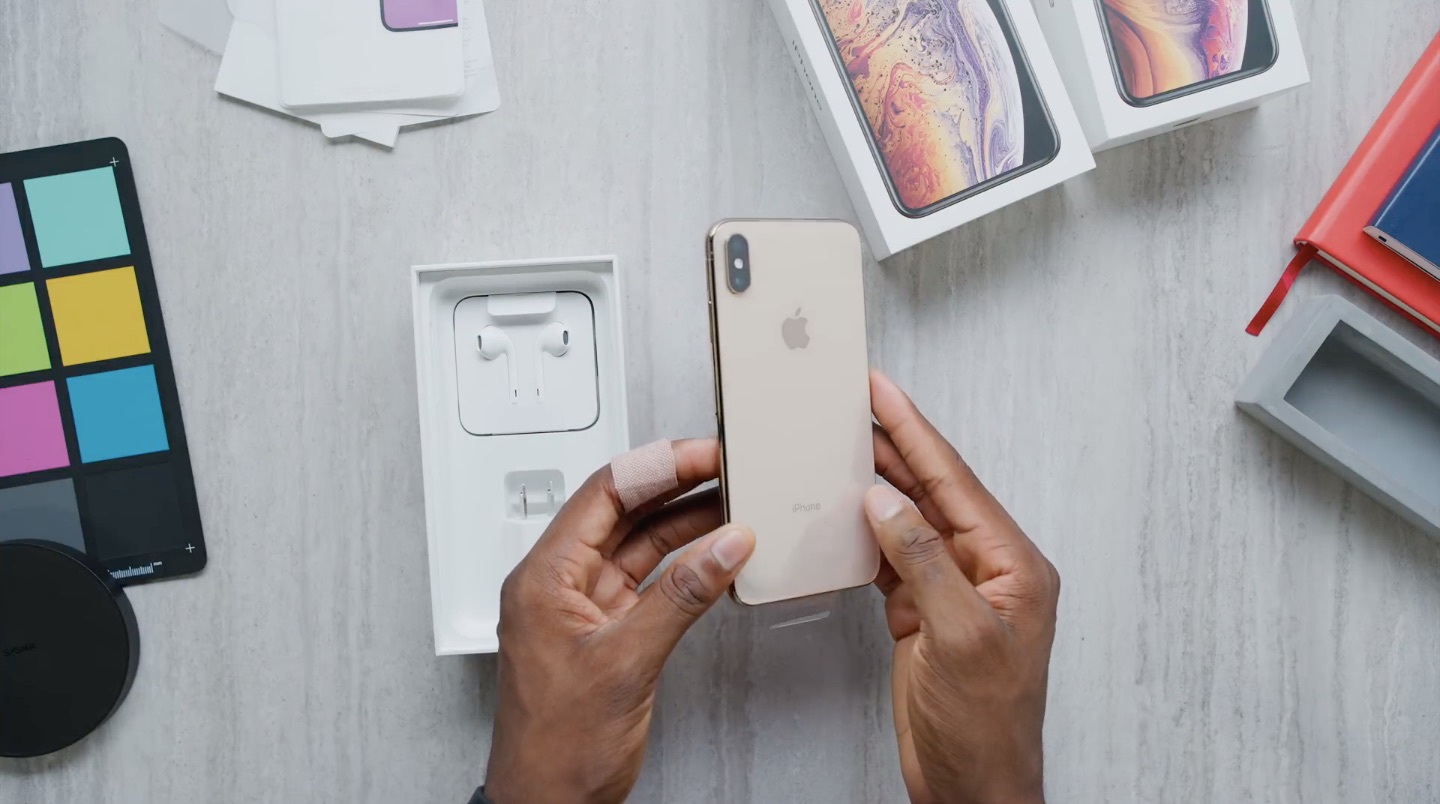 Apple’s new phones put iPhone X design in a trio of form factors, and our friend MKBHD has unboxed the regular iPhone Xs and a device that’ll be on many wish lists, a gold-colored iPhone Xs Max with half a terabyte storage and a massive 6.5-inch OLED display.

For those wondering, this flagship iPhone will set you back $1,449 before tax.

But first, watch the unboxing.

There isn’t much to see in terms of user experience or the feel of wielding a 6.5-inch fullscreen smartphone in one’s hand. For that, we’ll have to wait until MKBHD’s in-depth review arrives.

That’s right, you read that right.

The iPhone 6s and iPhone SE lines were the last Apple smartphones that featured a built-in 3.5mm headphone jack, but those models are no longer available because Appel quietly killed them off after announcing the latest models for 2018.

“All this previous iPhones with no headphone jacks have always come with the little Lightning to headphone jack dongle in the box—very considerate,” he said. “This year it’s gone.” 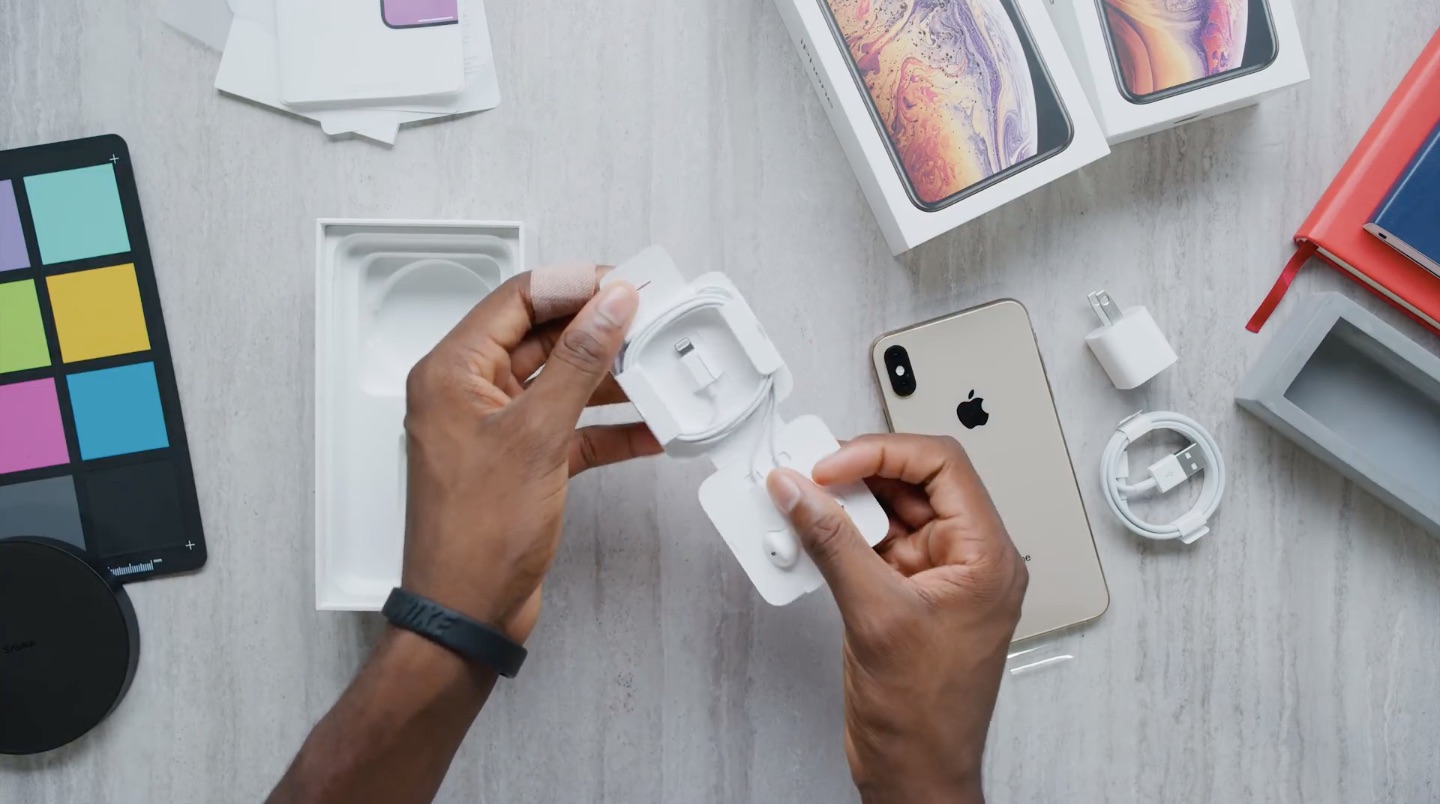 Where did the headphone jack dongle go?

“If you’re buying a thousand-dollar phone, or even a $1,450 phone like we have here, you wouldn’t blink twice at buying a little eight-dollar adapter,” MKBHD continued.

“It’s clearly done on purpose,” he uttered the same thought that was on our mind, too.

“Apple can afford to put the dongle in there, but they choose not to this time trying to nudge people again towards wireless headphones.”

The irony of this?

The best-selling product in Apple Store, by volume, for the last two years: dongles.

Here are some additional highlights:

We’ve partnered with MKBHD on two sets of branded wallpapers for Apple devices.

My #FirstWorldProblem with new iPhones

I use my AirPods all the time and love them a lot so I don’t mind that Apple hasn’t included that headphone jack adapter in the box. As a matter of fact, I cannot honestly remember if I have ever used the adapter that came with my iPhone 7.

TUTORIAL: How to fast charge your iPhone

To me, the major issue is the fact that Apple is acting like a cheapskate when it comes to fast charging. iPhones have long supported faster charging via the 10W or 12W iPad brick. iPhones from iPhone 7 onward have included a handy fast-charging feature that takes the battery from dead to 50% in 30 minutes.

To take advantage of fast charging, however, customers must spend an extra $68 just because Apple in its great wisdom chose not to include a USB-C power brick and a Lightning to USB-C cable in the box. This exclusion is patently Apple—they don’t include a wireless charger either.

ROUNDUP: The best fast-charge USB-C power bricks for your iPhone

The 5W bricks included in the boxes with the iPhone Xs, iPhone Xs Max and iPhone Xr models still support just 1A. In case you’re wondering, you need a USB-C cable and a USB Power Delivery-compatible 15-watt or stronger power adapter to fast charge an iPhone.

A rumor said Apple would ditch its proprietary Lightning connector from 2019 iPhone and replace it with the industry-standard USB-C port, which might explain why there’s no fast-charge equipment in your iPhone box.

If it’s any consolation, you do get a faster Qi wireless charging with the latest iPhones.

So, boys and girls, what do you make of MKBHD’s unboxing video?

Let us know in the comments