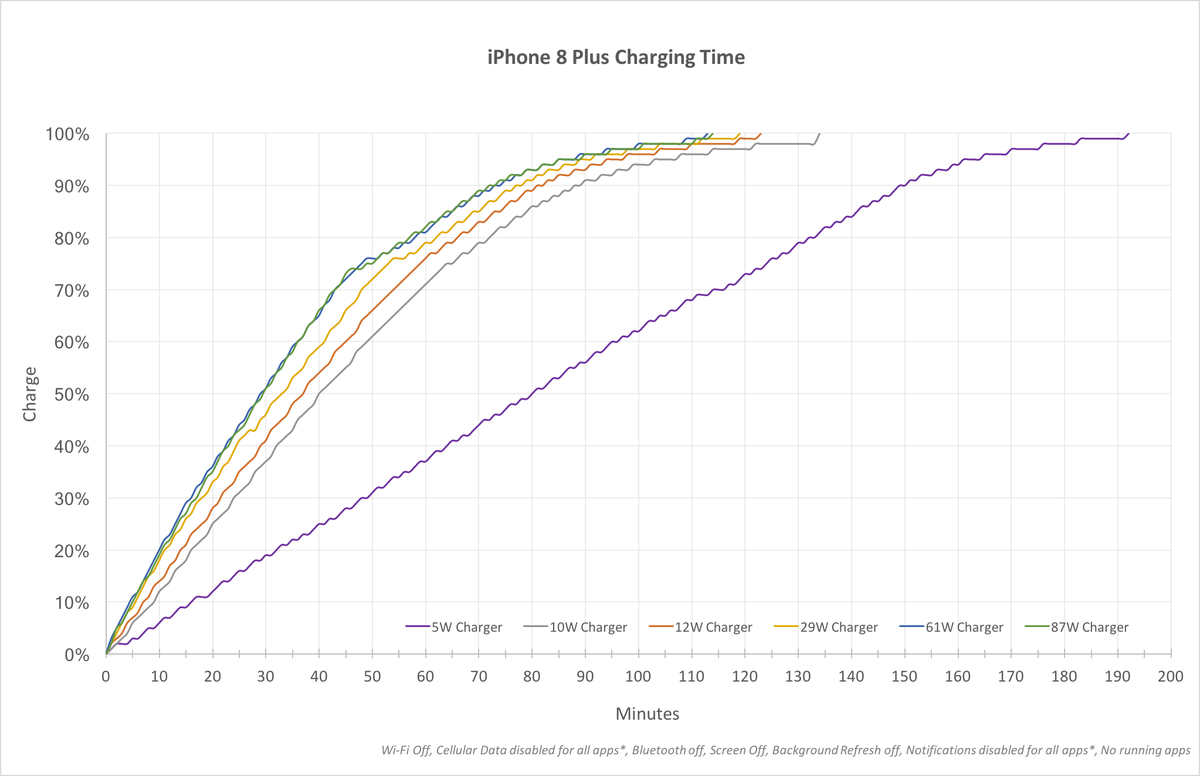 Dan Loewenherz, the founder of a software studio in Texas that helps startups turn ideas into working products, has take it upon himself to compare iPhone charging times by charger.

TL;DR: all you need to charge your iPhone twice as fast is a 10/12W iPad charger.

(By the way, Dan is also the brains behind a tremendously useful app that makes it easy to move your Health data from one iPhone to another).

In comparing iPhone 8 Plus charging times by charger, Loewenherz has found out what I’ve suspected all along: fast charging using Apple’s 29-watt charger and USB-C to Lightning cable is only marginally faster than with an iPad charger and standard Lightning cable.

Do yourself a favor, save a ton of money and just use an iPad charging brick with your iPhone.

Consider for a moment that a Lightning to USB-C cable from Apple (only Apple sells these at the moment) is a $19 value. On top of that, you need a USB Power Delivery-compatible (USB-PD) charger from Apple, or a third-party one.

Getting a 30W USB‑C Power Adapter as the least expensive Apple option is another $49 so you’re looking at a minimum cost of $68 to take advantage of Fast Charge support in iPhones.

Go with either a 61W or 87W USB-C charger from Apple and you’re looking at a total of $94 and $104, respectively, to get a bit faster charging times than with the 30W brick.

Here are iPhone 8 Plus charging times with Apple chargers.

The 29W and 61W chargers obviously get you faster from zero to the fifty percent mark, but Apple’s power controller ratchets down charge rates after 30 minutes so the difference is not as pronounced when charging the device from zero to 100 percent.

Apple’s 29W charger takes about one and a half hours total to completely charge an iPhone 8 Plus from dead. The 12W charger and USB-C to iMac connection needs only 15 minutes longer to top up, AppleInsider has discovered.

For context, it takes about 2.5 hours to achieve a full charge with Apple’s gratis 5W adapter.

Of course, you don’t have to use Apple’s pricey chargers: there are more affordable options out there, but be sure that a third-party charger you’re buying uses USB-PD specification.

Wireless charging is currently just as slow as the included 5W adapter, resulting in about ten percent gain every fifteen minutes. An upcoming software update due later this year will increase wireless charging speed by bringing power transfer rates up to 7.5W.

BOTTOM LINE: if you care about iPhone charging speed and own an iPad, just use the included 10/12W wall brick for two times faster charging without needing to buy extra things.

Alternatively plug your iPhone into a USB 3.0 port on a Mac.

If you own an iPad Pro and an iPhone, it may make sense to upgrade to Apple’s 29W charger because not only will your tablet charge noticeable faster but you’ll get two times faster iPhone charging, too. Plus, you’ll have a spare iPad charger to carry in your bag or purse.

And if you typically charge your iPhone overnight or while at your desk, then even the bundled 5W charger may suffice. Regardless, Apple should definitely do the right thing and start putting a 10-watt charger in the box with each iPhone instead of cheating out.

And for those wondering about higher wattage charging negatively affecting battery health and life, Apple’s online store pages for the 10/12/29/61/87W chargers all mention iPhones in the Compatibility section so clearly the company condones using them with iPhones.