This tutorial will show you how to type or enter the Apple logo on your Mac, iPhone, iPad, Apple TV, Windows PC, and any web browser.

How to type the Apple logo

Here’s how to enter the Apple logo with your devices.

To type the Apple symbol on your Mac, hold the Option + Shift + K keys at the same time.

The shortcut works with the standard US-English keyboard layout.

If your Mac keyboard is something different such ABC – India, pressing Option + Shift + K will enter a different symbol, like a degree sign. While working on this article, I found that you can type the Apple logo using the above key combination if your English keyboard is Australian, British, Canadian English, Irish, and Dvorak. Certainly, more languages may support this, but I tried just the English ones.

International users who rely on world keyboards with different layouts than the standard US QWERTY keyboard or one of the above keyboards can add the US English layout via the Keyboard preference pane and switch to it in order to enter the Apple logo symbol. To do this, go to System Preferences > Keyboard > Input Sources > plus button and add English US keyboard. 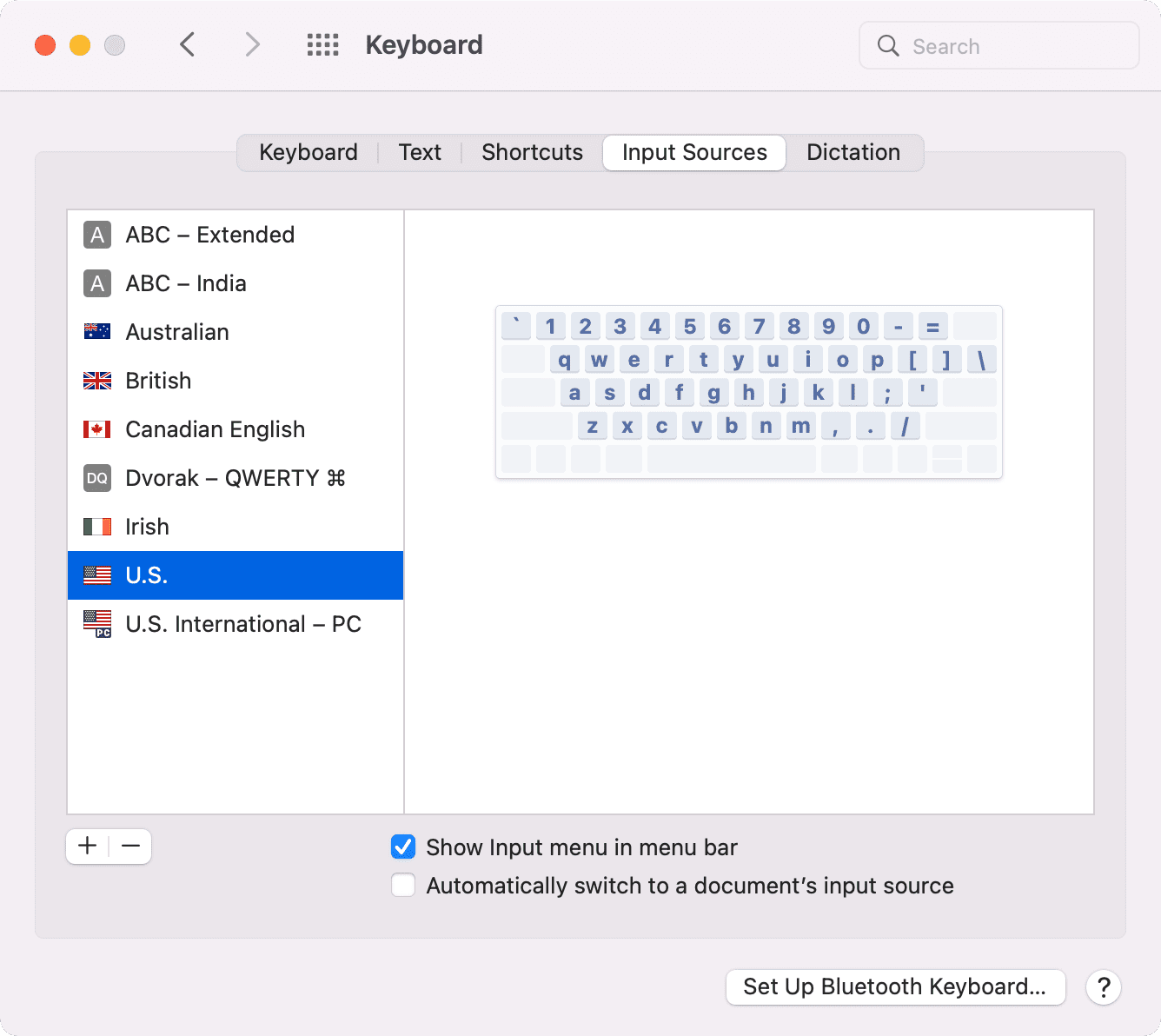 You can switch between your various keyboard by clicking its icon in Mac’s menu bar. 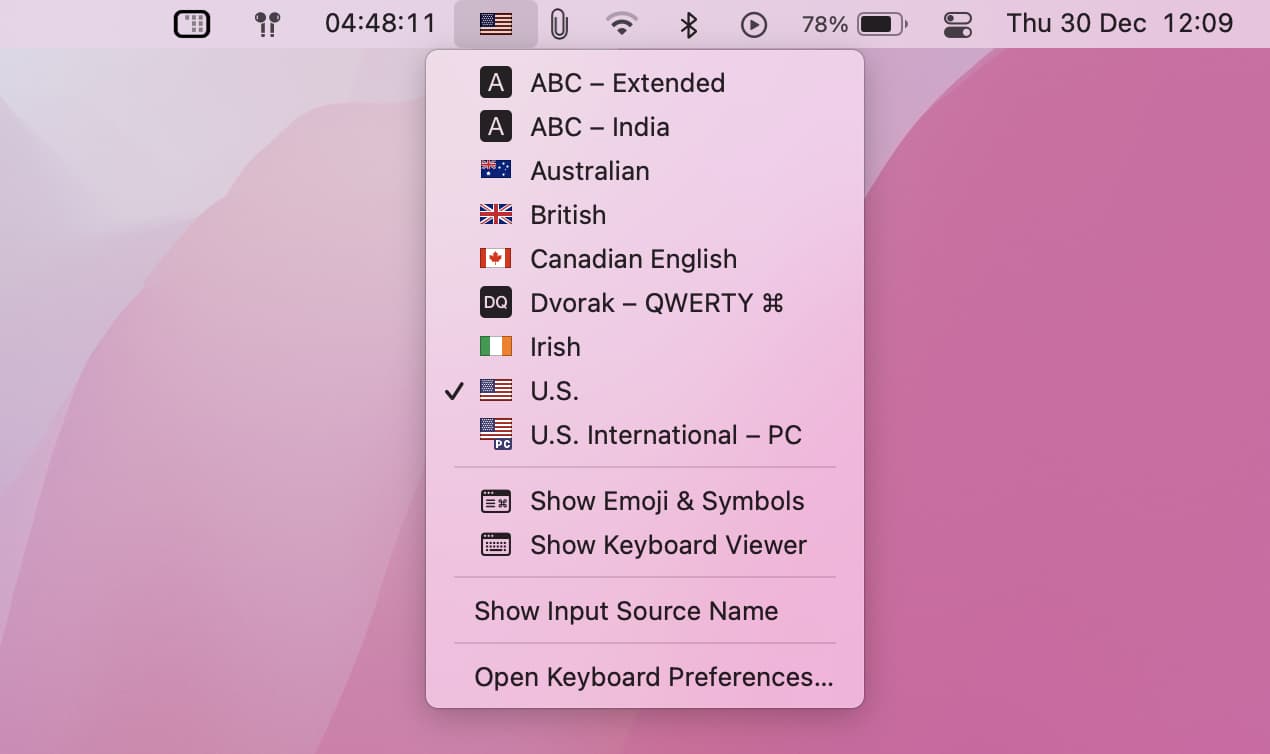 As a more elegant solution, create a custom text replacement as outlined further below.

To insert the Apple icon on your iPhone or Mac, you will have to create a text replacement shortcut.

4) Hit “+“ in the top-right corner to create a new text replacement.

5) Copy the Apple logo symbol  from this post on your iOS device. Tap and hold next to Phrase, then select Paste from the bubble menu to insert the symbol.

6) Tap next to Shortcut and enter a custom snippet to be replaced with the Apple logo. I use “aapl,” but you may choose another snippet (to avoid triggering the replacement by accident, use a unique letter combination that isn’t a part of any common word or phrase).

7) Tap Save in the top-right corner to finish making changes.

Your shortcut will automatically expand into the Apple logo symbol as you type.

And if you pair a Bluetooth keyboard with your iPhone and iPad, you can enter the Apple logo symbol by pressing the same Option + Shift + K keystroke as on your Mac.

There’s currently no way to type the Apple logo with your Apple Watch.

Dictation and Scribble, the two primary input methods in watchOS, won’t let you enter the Apple symbol using your voice as you can with punctuation and formatting.

Thankfully, the logo does show as visible on the watch in apps like Messages and Reminders because it’s included in the default fonts of the watchOS operating system.

To type the Apple logo on your Apple TV, you will first have to connect a Bluetooth keyboard to it:

2) When Apple TV finds nearby Bluetooth devices, select your keyboard from the list.

3) If asked, enter the four-digit code and press Enter.

4) Navigate to the section of an Apple TV app that accepts text, like YouTube’s search feature.

5) Press Option + Shift + K on the wireless keyboard to enter the Apple symbol.

Just like that, the symbol is written out on your TV!

If you don’t have a wireless keyboard for your Apple TV, use your iPhone for typing:

1) On your iPhone or iPad with iOS 11 or later, open Settings > Control Center > Customize Controls and tap “+” next to Apple TV Remote.

2) Be sure to set up a shortcut on your iOS device that will replace “appl” with “,” as explained in the iPhone and iPad section dealing with Text Replacements.

3) With the Apple TV Remote widget added to your iOS Control Center, highlight any text input field on your Apple TV using your Siri Remote.

4) On your iPhone or iPad, open Control Center and tap the widget you just added, then choose your Apple TV from the list and enter the four-digit passcode that appears on the Apple TV screen, if necessary. Alternatively, press a notification that pops up on the Lock Screen of your iPhone upon selecting a text field on your Apple TV.

The Control Center widget works only with the fourth-generation Apple TV, Apple TV 4K and later, and requires an iPhone or iPad with iOS 11 or later.

Tutorial: Stopping the Apple TV remote keyboard from showing up on iPhone or iPad

Entering the Apple symbol on Apple TV using the Dictation feature is unsupported.

On Windows, there are many ways to enter special characters. We’ll focus on alt codes which require holding the Alt key while typing a 4-code decimal value.

The Apple symbol is defined in the extended ASCII character set in one of the private-use character points intended for apps and devices that need to display glyphs unspecified by the Unicode standard.

Unicode, however, doesn’t contain any corporate logos as part of the standard character set. That’s why the Apple symbol in a PDF, Google Docs, or Word document, in most cases, won’t show as visible on non-Apple platforms like Windows and Linux.

1) Open a document where you’d like to insert the Apple logo symbol.

2) Be sure that the Num Lock key is on, then press and hold the left Alt key. 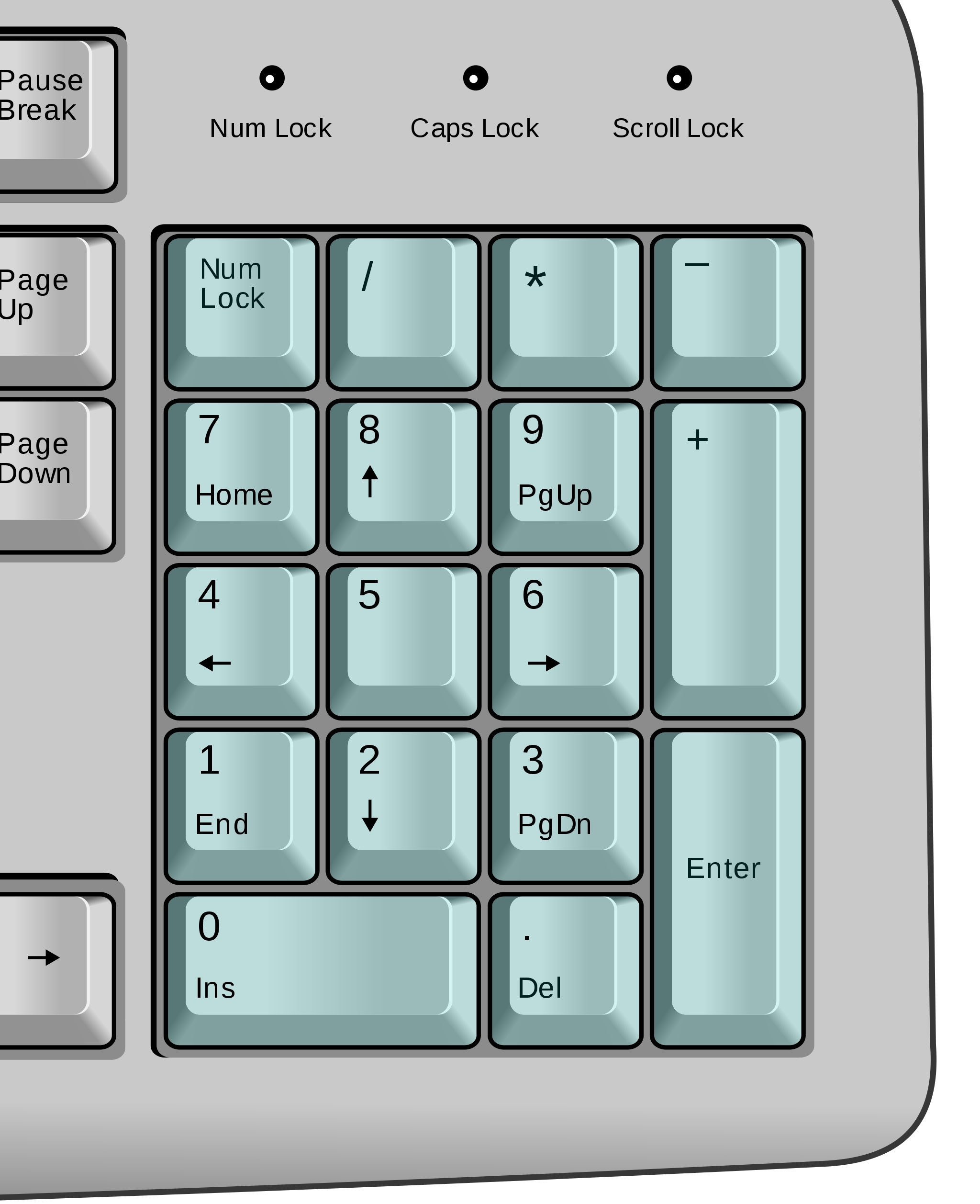 Note: you must put in the leading zero even though the character’s decimal code is “240.”

If your laptop lacks a numeric keypad, do this:

1) Open a document where you’d like to see the Apple logo symbol.

2) Press F 8 F F on the keyboard (the Unicode value of the Apple logo symbol).

The Apple symbol will be inserted at the current cursor position.

In certain Microsoft apps like Word, Excel, PowerPoint, and Outlook, there are dedicated options for entering special characters. To see a graphical representation of special symbols in Windows, open the stock Character Map app (charmap.exe).

In that case, switch to the Baskerville Old Face font in Character Map, select the Apple logo, click Select and choose Copy to put the character on the system clipboard.

From there, you can paste it into other apps using the standard Ctrl-V shortcut.

The Apple logo or any other special character or symbol can be typed out in your blog posts or webpages by using the HTML entities hexadecimal notation followed by a character’s Unicode hexadecimal value (the Apple logo symbol has the Unicode value F8FF).

To use the Apple logo on your webpage, use the following HTML code:

Make sure you add a semi-colon (;) at the end. After that, you should see the  character when the page is rendered in a browser.

Apple logo on other platforms

The Apple logo character renders properly across any iPhone, iPad, iPod touch, Mac, Apple TV, or Apple Watch. It can be typed using the iOS, macOS, and tvOS software. In watchOS, Dictation and Scribble provide no way to enter the Apple logo whatsoever.

On other platforms and web browsers like Google Chrome, Firefox, and Microsoft Edge, the symbol may show as a simple square, a strange character, or something entirely different. This isn’t Apple’s fault.

Both the Windows and Apple logos are in the private use area of the ASCII extended character set because the standard Unicode set lacks corporate logo characters. Due to different implementations, these special symbols don’t show as visible on other platforms.

The Apple symbol is included in the ASCII extended character set with these values:

Follow along as we teach you how to properly type the Apple symbol on your iPhone, iPad, Mac, Apple TV, or using non-Apple platforms such as Microsoft Windows.