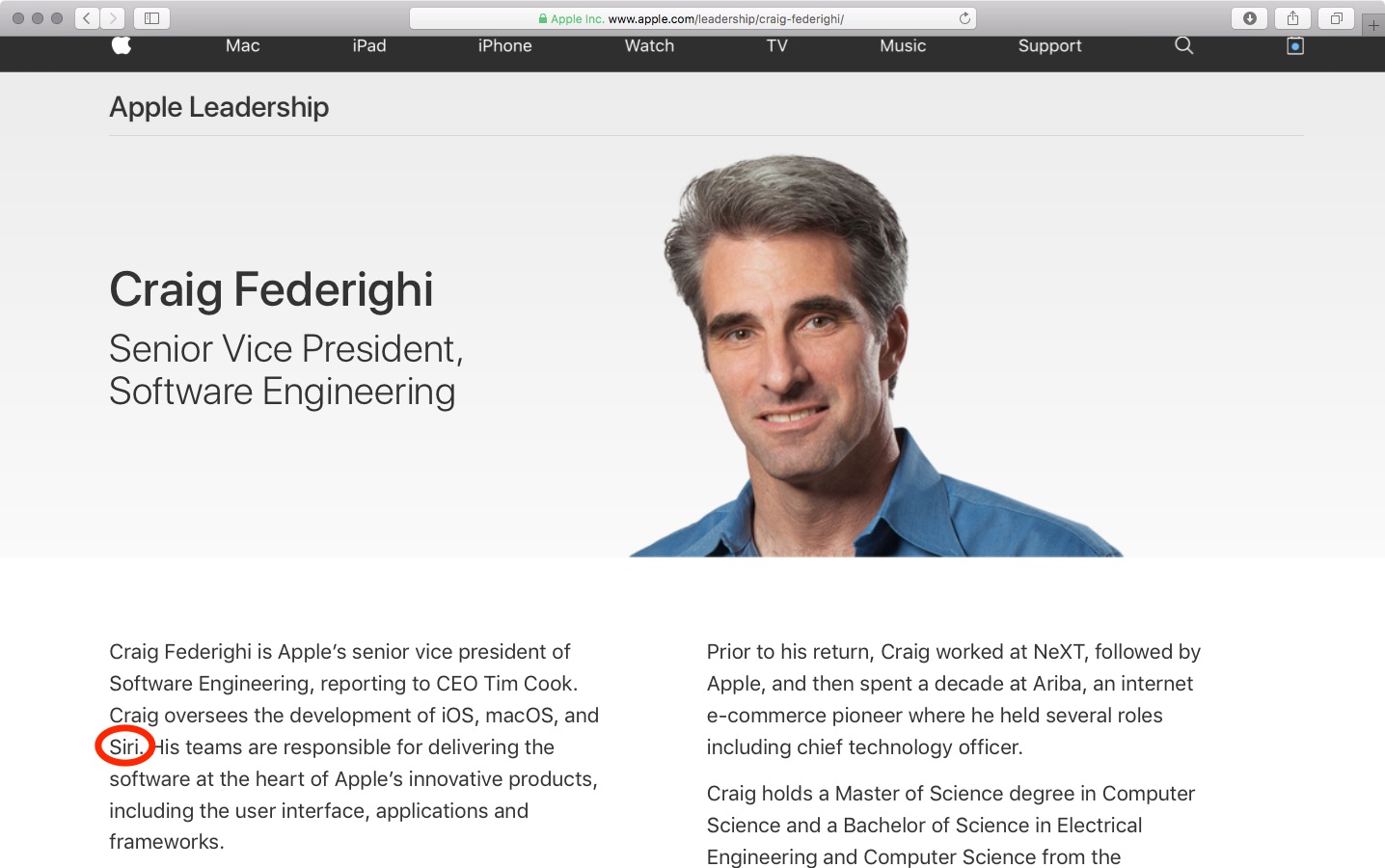 As first noted by MacRumors, Apple has officially acknowledged this change via its Leadership webpage, with an updated bio page for Federighi now reading as follows:

Siri is no longer mentioned on Cue’s bio page, but the move was hardly unexpected.

Siri now relies heavily on machine learning and artificial intelligence, which are the default domains of the company’s software boss, Federighi.

More importantly, Cue already has a lot of things on his plate.

As if that weren’t enough, he also leads the newly created team responsible for developing all aspects of Apple’s worldwide video programming although that’s something that should soon become the main responsibility of former Sony Pictures Television veterans Jamie Erlicht and Zack Van Amburg, whom Apple recently hired to lead its re-newed Hollywood push.

Tasking Federighi with advancing Siri development makes even more sense considering his primary domains at Apple include all software-related things, from iOS and macOS to the user interface, applications and frameworks.

Cue was also responsible for managing App Store since its inception until December 2015, when Apple shifted that responsibility over to Phil Schiller, the company’s Senior Vice President of Worldwide Marketing and the steward of its relationship with developers. 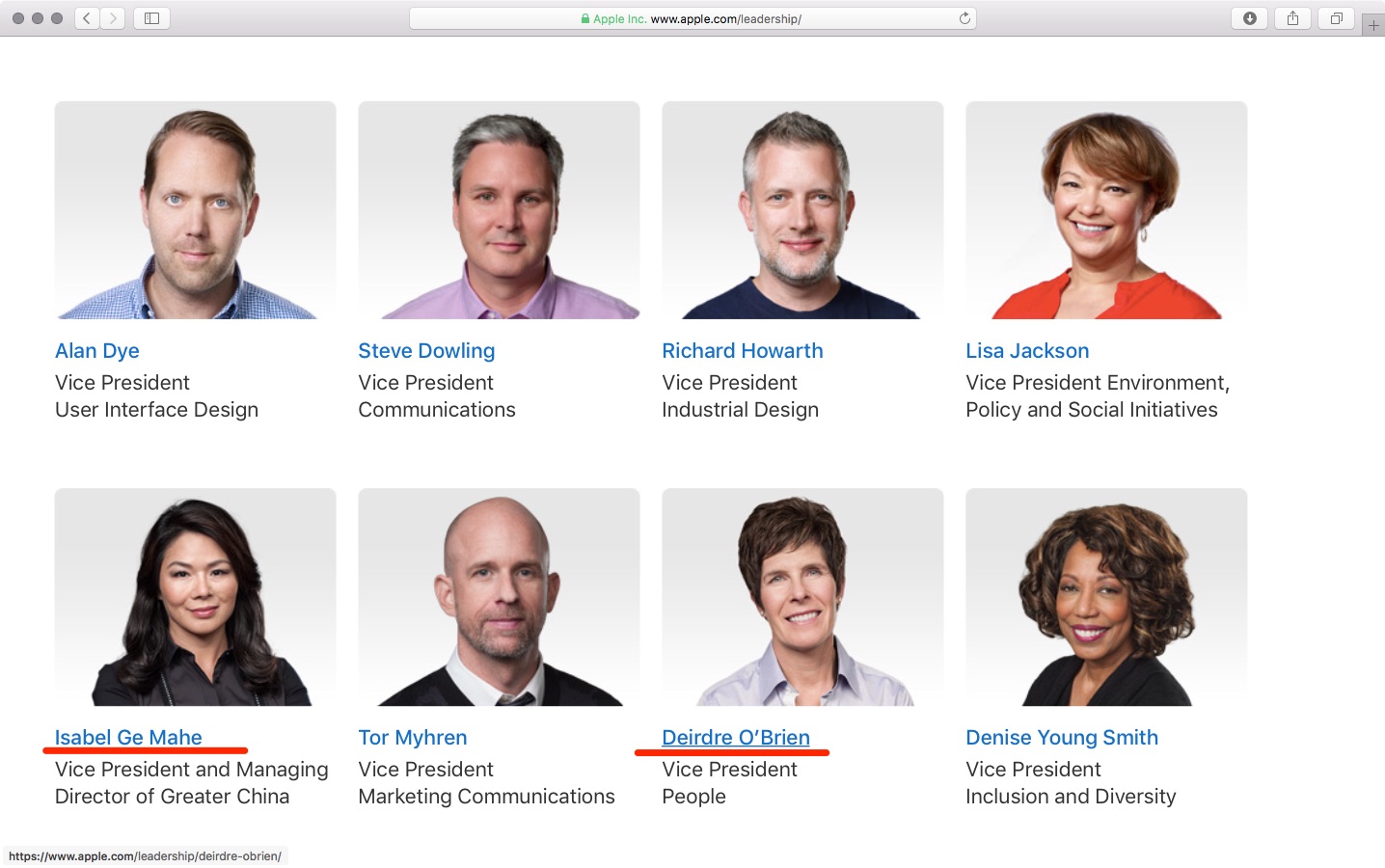 On a related note, the Apple Leadership webpage was also refreshed to acknowledge Deirdre O’Brien and Isabel Ge Mahe‘s new roles at the Cupertino firm.

Deirdre and her team are responsible for creating and maintaining Apple’s unique culture which enables employees to do the best work of their lives. Leading all HR functions including talent development and analytics, recruiting, benefits, compensation and business support; Deirdre will also oversee Apple University.

Since joining Apple in 1988, Deirdre has played a key role in many of Apple’s product introductions. Most recently, she led the Worldwide Sales and Operations Support team responsible for demand forecasting, supply planning and delivery of Apple products to customers. Her team also supported many key sales initiatives, working closely with all of Apple’s sales channels, Apple stores and resellers.

And this is Ge Mahe’s new profile:

Isabel joined Apple in 2008 as Vice President of Wireless Technologies, overseeing the development of cellular, Wi-Fi, Bluetooth, NFC, location and motion technologies for nearly every Apple product. She also played a key role in developing new China-specific features for iPhone and iPad.

Before joining Apple, Isabel served as Vice President of Wireless Software Engineering at Palm and held key technical and managerial positions at other wireless companies.

Isabel holds Bachelor and Master of Electrical Engineering degrees from Simon Fraser University in British Columbia and an MBA from the University of California, Berkeley.

Back in July, Apple said that it named Vice President of Wireless Technologies, Isabel Ge Mahe, its new Vice President and Managing Director of Greater China.

Both women started in their new role on September 1.