Your iPhone, iPad or iPod touch lets you spruce up your messaging game with stickers, emoji, reactions, bubble and screen effects, animated expressions of your feelings and iMessage Apps for things like OpenTable reservations, Apple Music integration, animated GIF creation and more.

This tutorial details important things pertaining to third-party iMessage Apps, including finding and installing them in the App Store, organizing them on the Messages App Shelf, disabling those you seldom use and deleting ones you no longer need.

Third-party iMessage Apps allow you to do many things without ever leaving your conversation that previously needed to be accomplished in one or more standalone apps. For instance, iMessage Apps from your favorite developers may let you create an animated GIF to send to a friend, schedule dinner and a movie, send payments, share a song and more—all within their custom interface inside of Messages.

Some interactive iMessage Apps—namely games—require both the recipient and the sender to have them installed on their device.

What are the system requirements for iMessage Apps?

iMessage Apps require an iPhone, iPad or iPod touch with iOS 10 or later and the iMessage service. People on macOS Sierra can only receive output from iMessage Apps in the form of photo attachments. Mac users cannot interact with iMessage Apps nor can they download, use or send them to others.

What types of iMessage Apps are there?

There are two types of iMessage Apps available:

As evidenced on the below screenshot, standalone iMessage Apps are labeled with an “Only for iMessage” on their App Store page and they put an icon on the Home screen like regular apps. 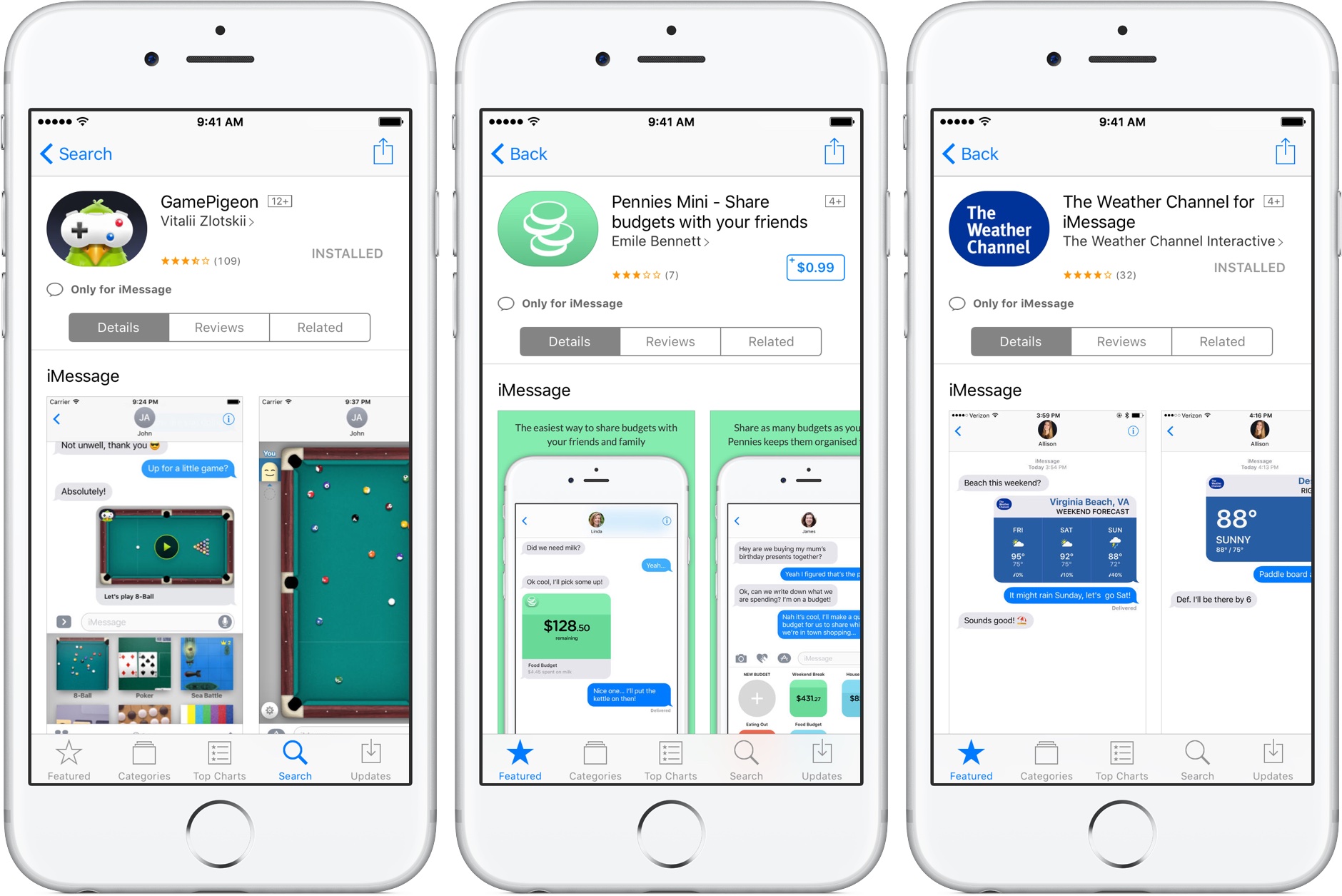 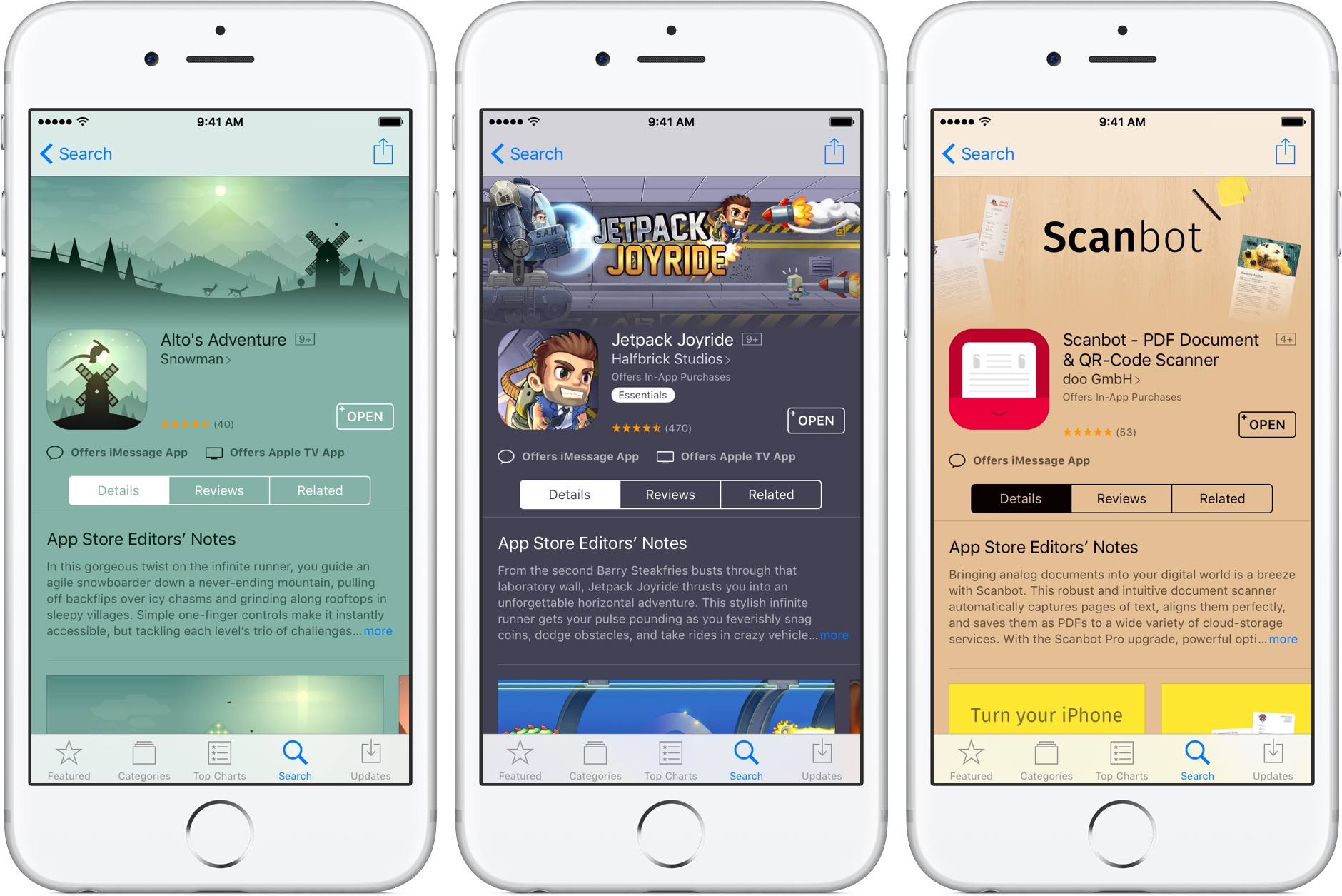 Will iMessage Apps cost me money?

How are iMessage Apps created and packaged?

Creating them requires a developer account with Apple, a Mac with Xcode, coding skills and advanced knowledge of third-party iOS development. Created using Apple’s new Messages framework in iOS 10, iMessage Apps can be packaged and distributed as:

Bundled iMessage Apps can provide the same features as their standalone counterparts and are listed on the App Store in the same category and with the same description as their container iOS app. 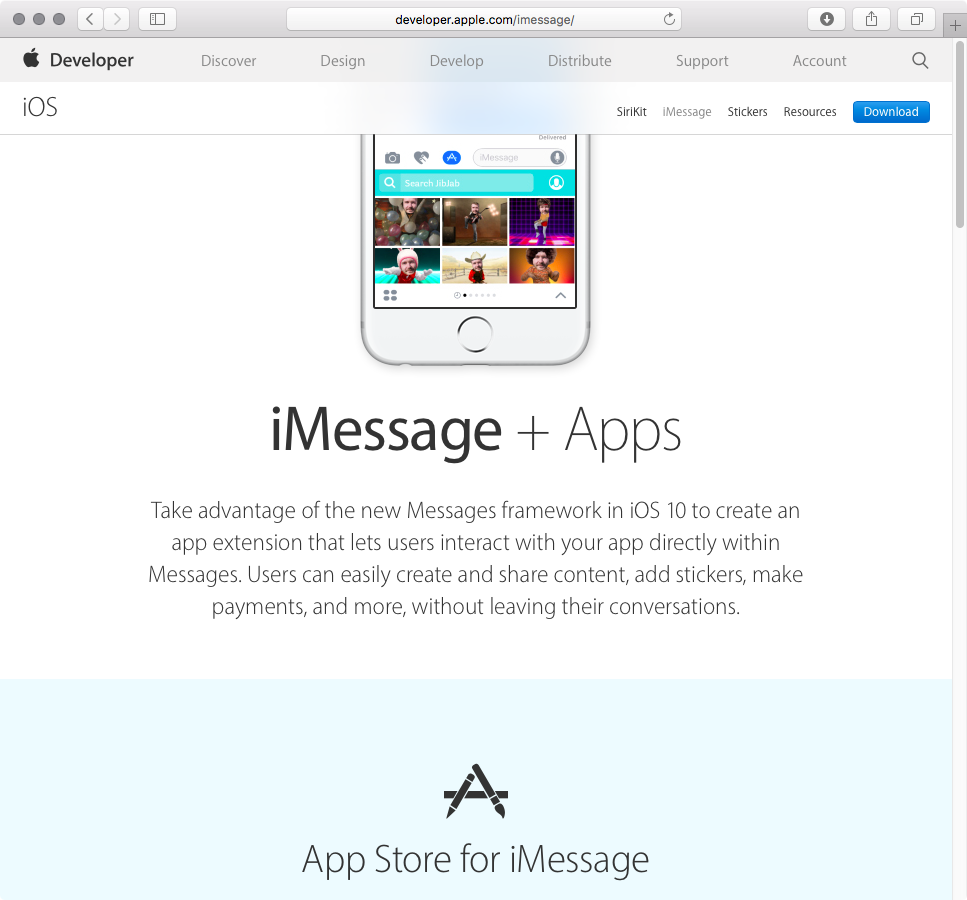 iMessage Apps adhere to Apple’s screening process and must be submitted for approval before they are permitted to show up in the App Store. You can learn about third-party iMessage Apps development on Apple’s website.

How to find and install iMessage Apps

You can find and download iMessage Apps the old-fashioned way—by browsing and downloading them directly in the App Store. Or, you can download and install them from a dedicated App Store section that’s accessible within the context of the Messages app itself.

2) Tap the App Store button to the left of the text field to open your app drawer.

3) Tap the App Shelf button in the bottom left corner, it resembles four ellipses in a grid.

The built-in App Store for Messages pops up, letting you:

5) Find an iMessage App you wish to download, then tap the Buy (if it’s paid) or Get button (if it’s free). The app will download to your device.

If this is a bundled iMessage App, it’ll get downloaded to your device along with its container app. If it’s a standalone app, it will be downloaded standalone and its icon shall appear on the Home screen.

If you know the iMessage app’s name, you can find it quickly on the store using a built-in search feature. Begin by tapping the magnifying glass icon in the top left corner of the Messages App Store. 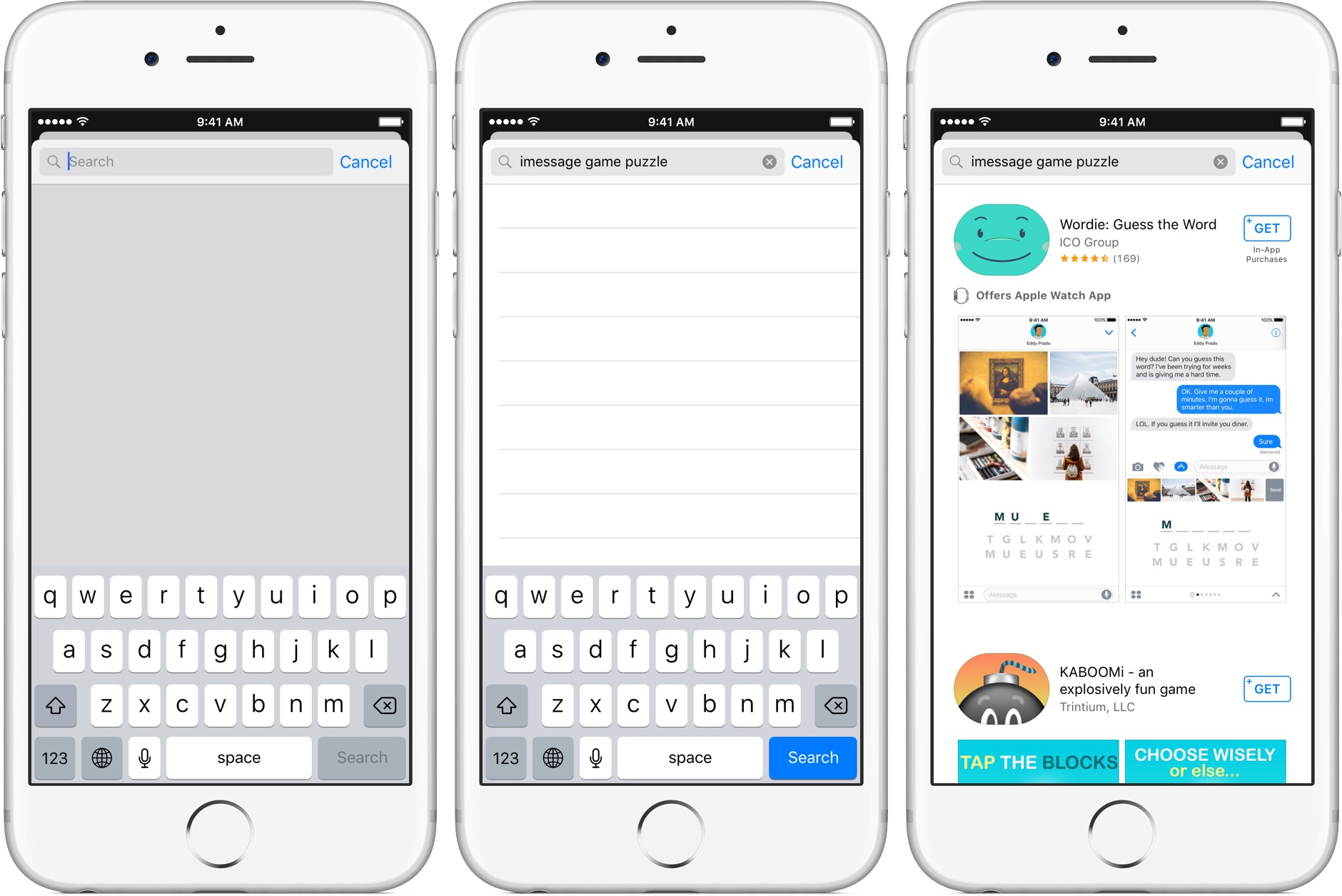 Now type your query into the search field. We suggest using the word “iMessage app” to make your search more relevant and exclude downloadable stickers and other unrelated content from search results.

If you previously downloaded this particular iMessage app and wish to re-download it, you will see the cloud icon in place of of the Buy/Get button.

If you see “Installed” next to the name, as shown below, the iMessage App app is already installed on your device.

You can re-enable any bundled iMessage Apps via the App Store’s Manage tab without re-downloading them, provided their container app is currently installed on the device.

Their standalone counterparts must be re-downloaded to re-use them after disabling. Any standalone iMessage Apps you have on your device, including ones you removed, can be found in the App Store’s Purchased tab.

Bundled iMessage Apps won’t show up in your Purchased items because they are packaged as part of the container app.

For example, the Airmail iMessage app that lets you add photos from email attachments to you conversations is distributed as part of the Airmail app itself so you won’t see it listed separately in the Purchased section.

Conversely, The Weather Channel distributes its iMessage app as a standalone download so it’s listed alongside your existing Weather Channel for iOS app in the Purchased section.

When someone sends you an iMessage app in an iMessage and you currently don’t have it installed on your device, it will appear in the conversation with a hyperlinked label which denotes its App Store name. 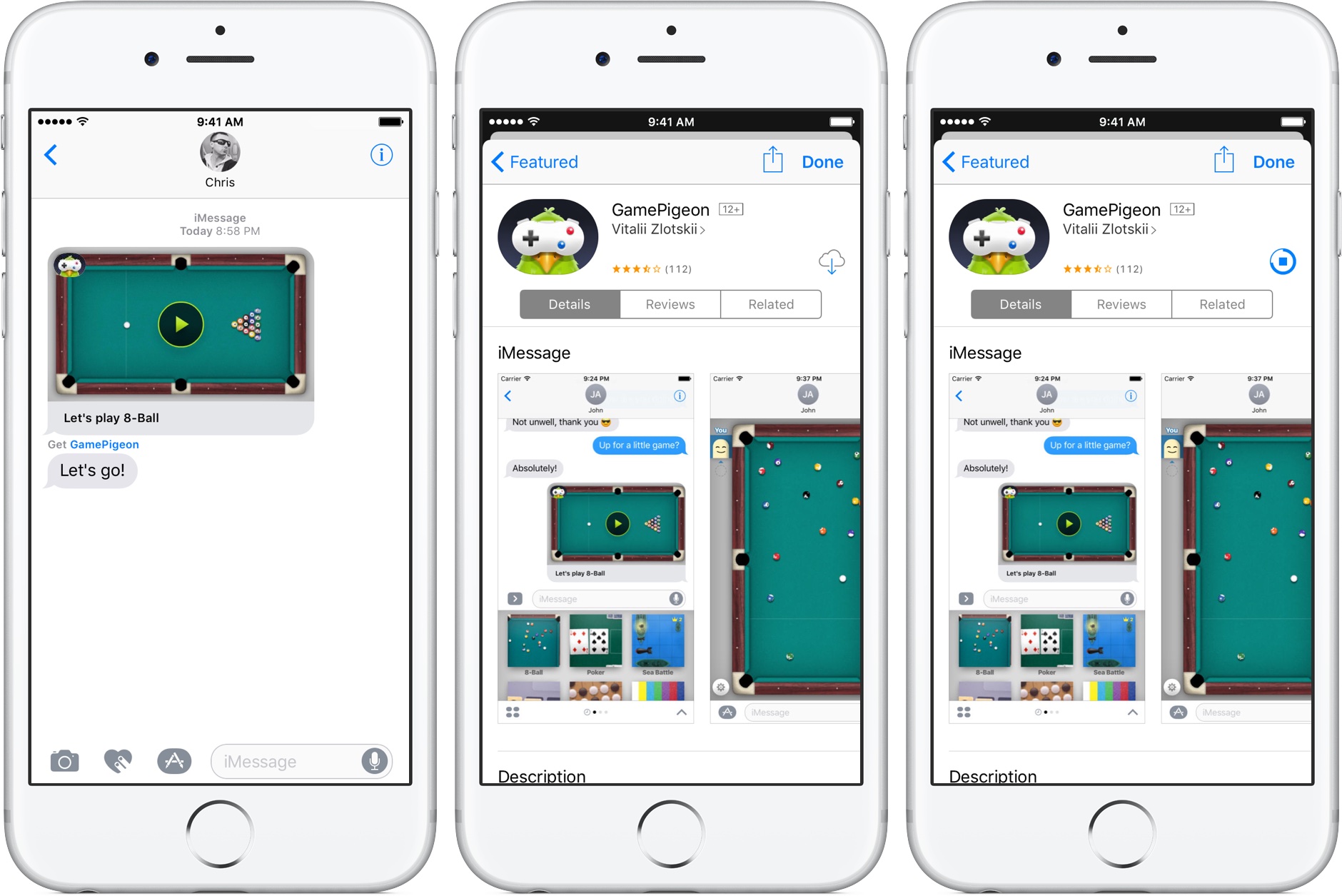 You can tap either the label itself or the iMessage app thumbnail in the conversation to be taken right to its appropriate listing in the App Store. From there, you can download and add the app to Messages with a tap.

Tap the Featured tab to see a list of featured iMessage Apps, stickers and other downloadable content for Messages that Apple’s editorial team has curated. 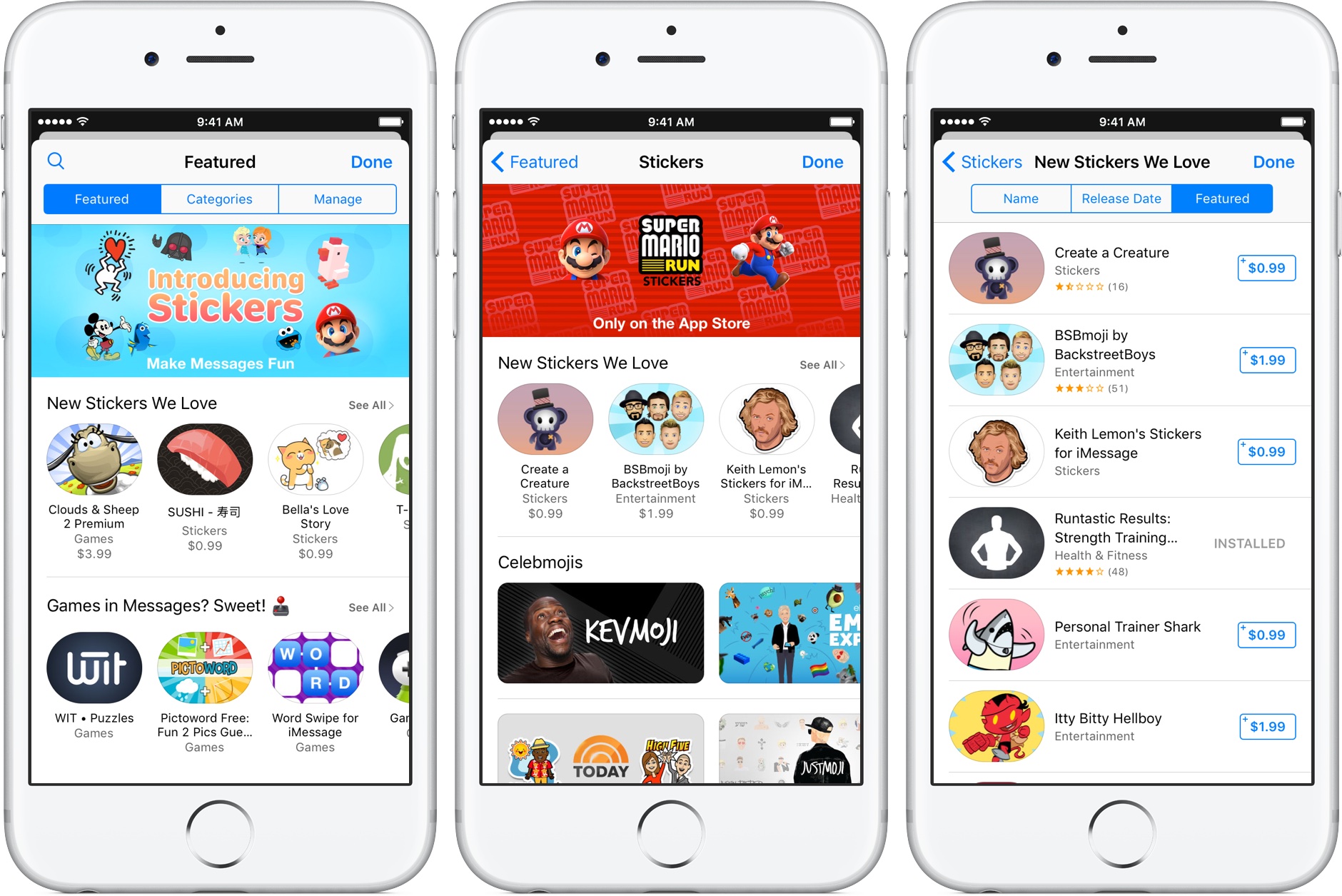 To narrow your hunt for iMessage Apps on the store to a specific category, tap the Categories tab, then choose a desired entry in the list of built-in categories: 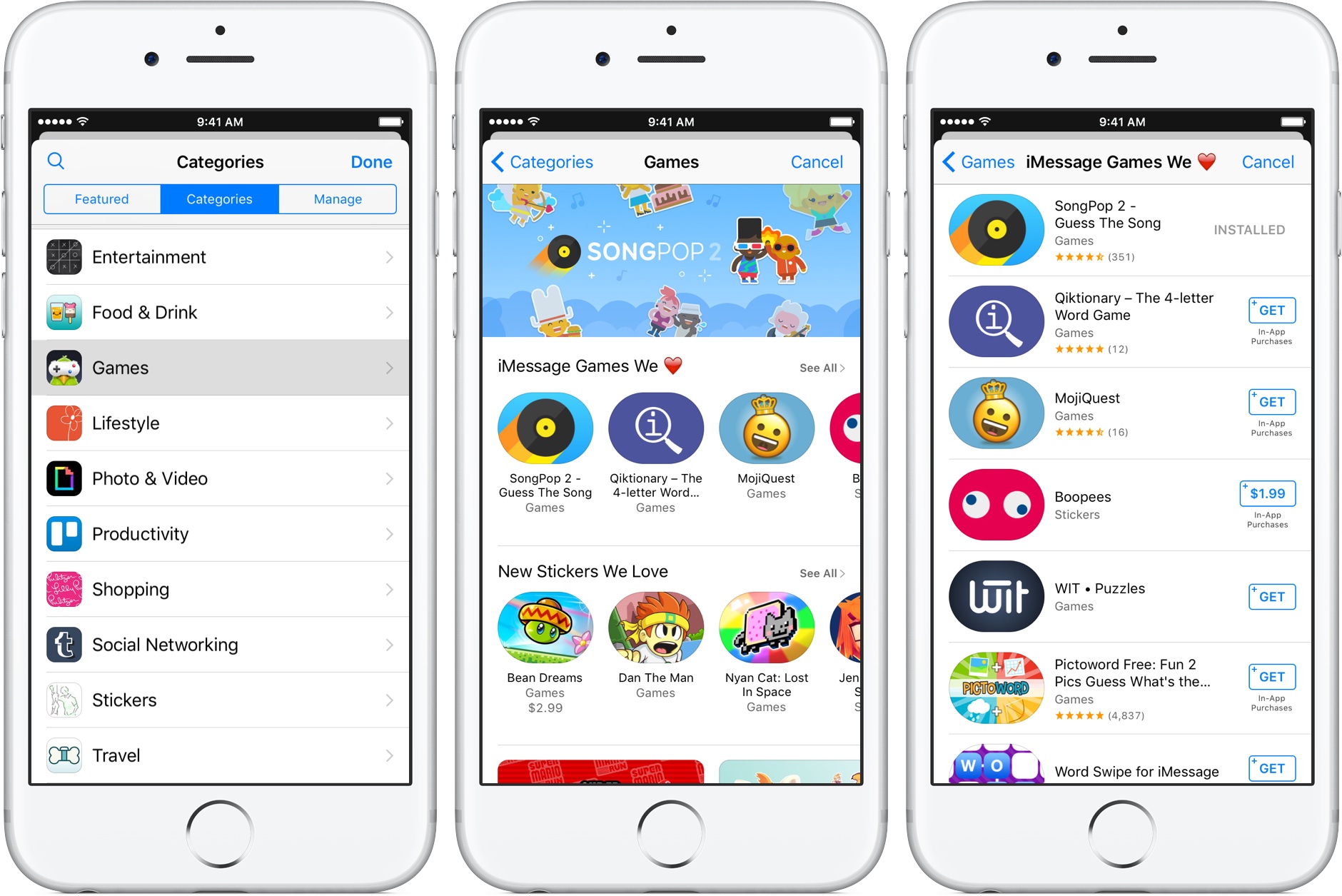 Apple may add or remove built-in app categories over time.

How to use iMessage Apps in conversations

1) In Messages, tap a conversation in the list or create a new one.

2) Tap the Apps button (it looks like an App Store icon) to the left of the text field to open your Messages app drawer.

Both these methods are described further below.

T app drawer defaults to displaying any recently-used iMessage Apps, stickers and other third-party content you have added to Messages.

Swipe left or right to flip through the recently used items until you find your desired app. Tap the arrow pointing upward to take Recents fullscreen.

If you’ve added lots of third-party content to Messages, Recents can become cluttered. To select a specific iMessage app faster, tap the App Shelf button in the bottom left corner (it resembles four ellipses in a grid).

Now swipe between pages of your downloaded iMessage Apps, stickers and other third-party content until you find an app you’d like to use. 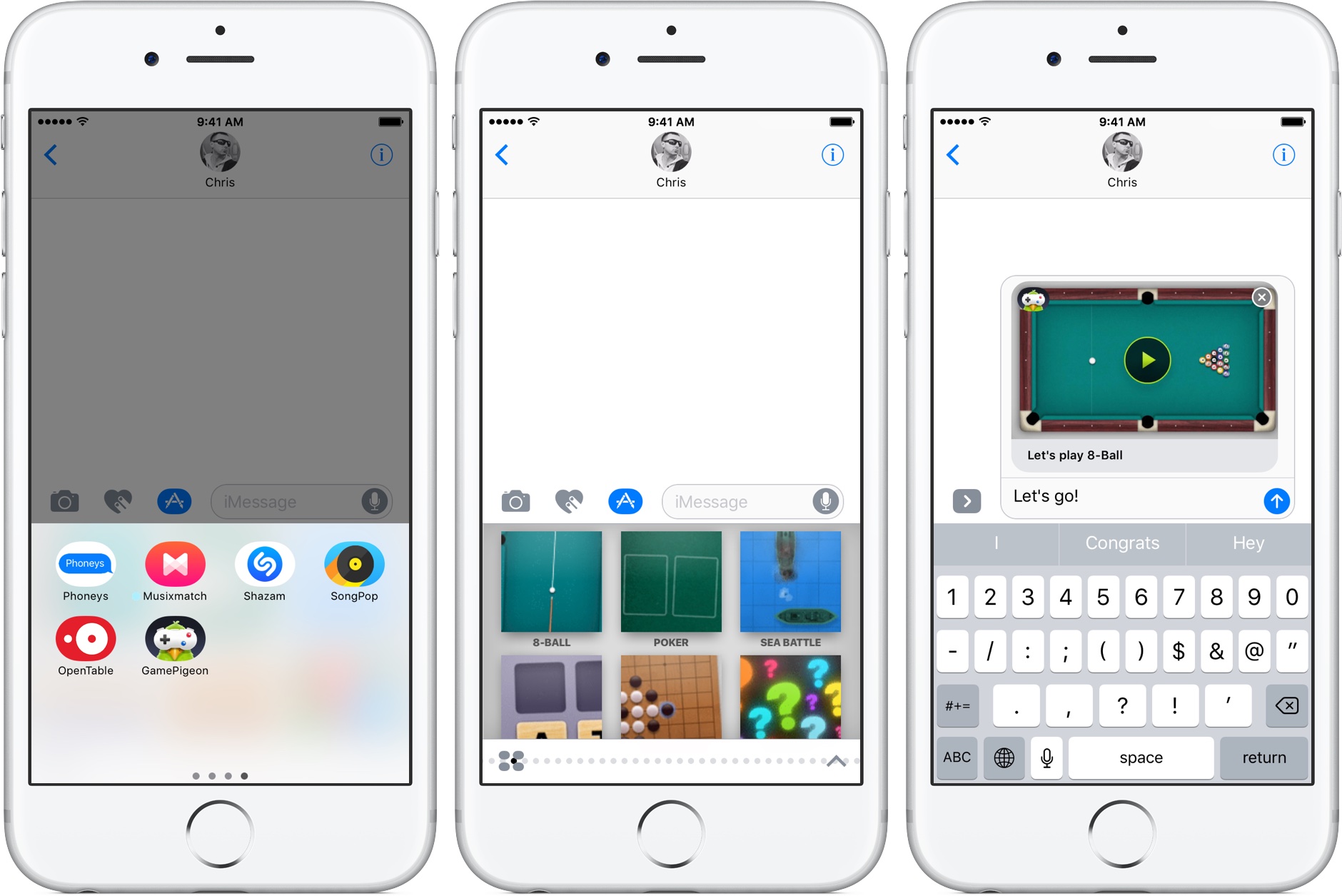 Tap it, then choose any app-specific options you may be presented with.

4) Type an optional message, then hit the blue Send button. 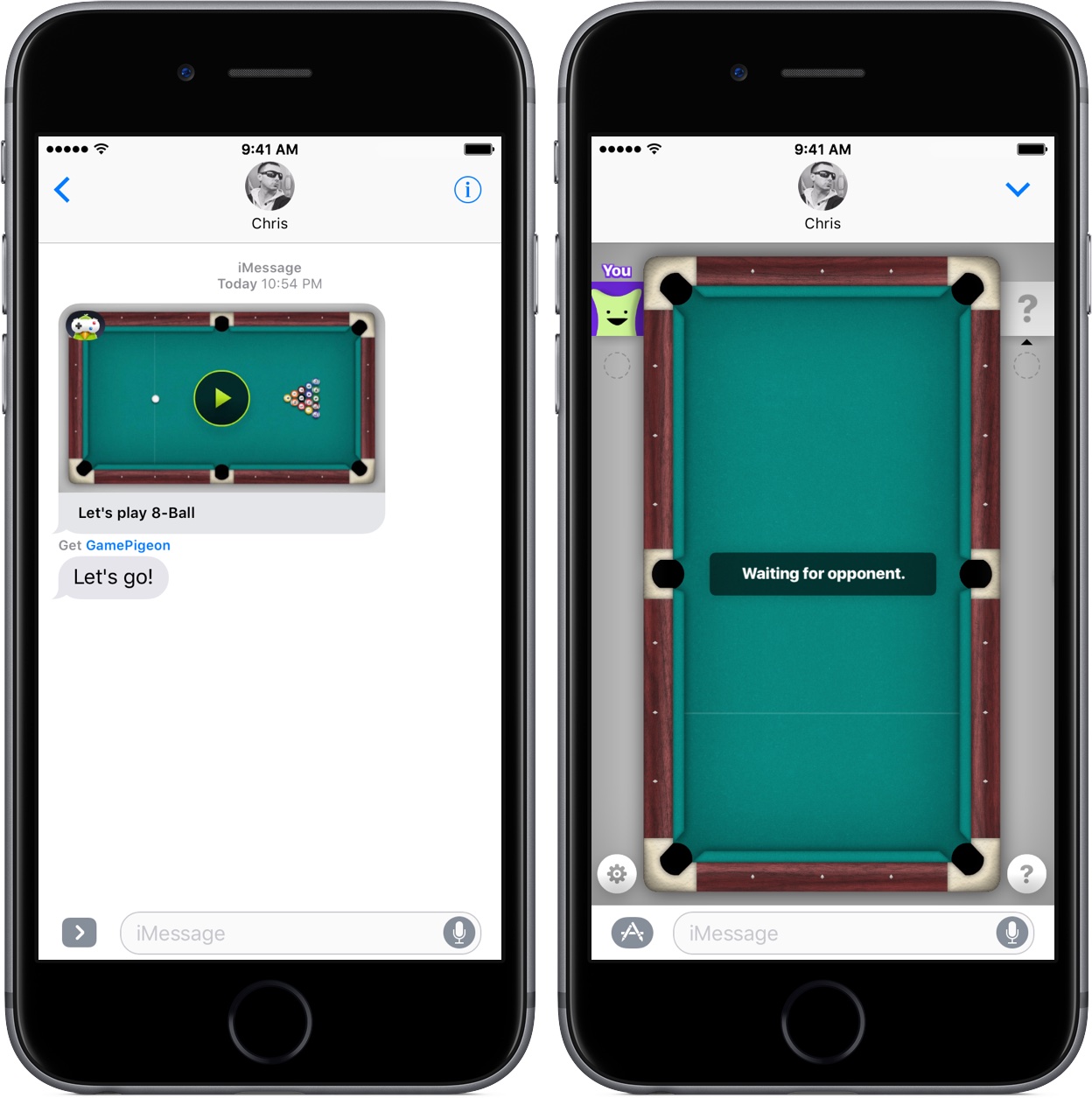 iMessage Apps cannot be rotated, resized, stamped on chat bubbles or other items in the conversation like stickers. When you send an interactive iMessage app that the recipient does not have  installed on their  device, they can just tap its thumbnail in the conversation to download and start using the app right away.

How to organize iMessage Apps

You can reorder iMessages Apps on your App Shelf by way of dragging them around. iMessage Apps you no longer need can be temporarily disabled (bundled apps only) or permanently deleted form your device (both bundled and standalone apps).

To rearrange iMessage Apps, tap and hold any item in App Shelf until the icons start to jiggle. You can now drag the icons around, relocate your most-used iMessage Apps to page 1 and more.

To move an icon between pages, drag it to either edge of App Shelf and wait until the next/previous page scrolls into view. Unfortunately, you cannot file iMessage Apps into folders inside App Shelf like you can do with ordinary apps on your Home screen.

Any newly downloaded or updated iMessage Apps are listed under the New and Updated heading in the Messages App Store’s Manage tab so you can quickly identify those that may contain new content. 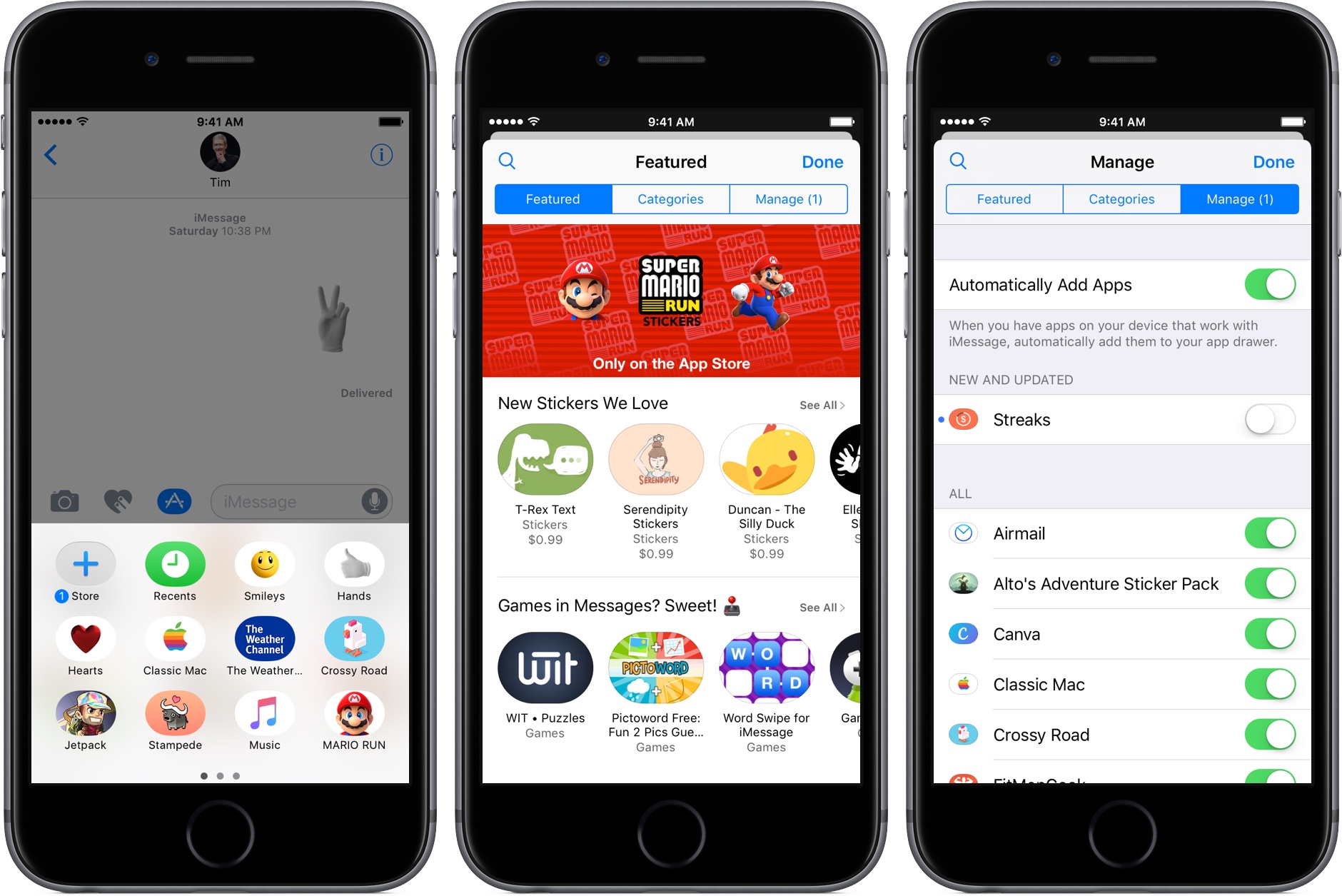 You’ll see a badge on both the Manage tab’s title and the Store button in App Shelf when any third-party Messages content has been updated.

By default, Messages installs and puts into app drawer any bundled iMessage Apps automatically as soon as you download their container app from the App Store.

To prevent this from happening, slide the switch Automatically Add Apps under the Messages App Store’s Manage tab to the OFF position. 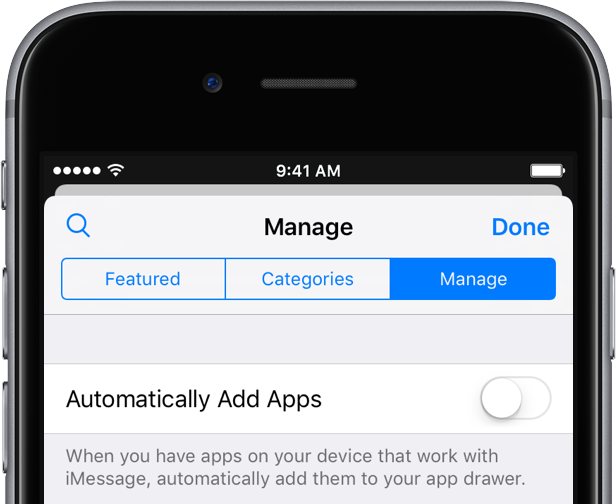 You can temporarily disable bundled iMessage Apps through the built-in App Store’s Manage tab. Remember the distinction between disabling and uninstalling—disabling simply removes the app’s icon from App Shelf to reduce clutter and deactivates the Messages extension and slides its toggle on the store’s Manage tab to the OFF position.

This lets you reactivate any disabled iMessage app by toggling its switch in the Manage tab. Deleting the container app also removes its bundled iMessage component from the device.

How to delete iMessage Apps

You can delete iMessage Apps from Messages and your device in two ways:

1) Open Messages on your iPhone, iPad or iPod touch and tap a conversation in the list.

2) Tap the Apps button to the left of the text entry field.

3) In the Messages app drawer, tap the App Shelf button in the bottom left corner that looks like four ellipses in a grid.

4) Tap the Store button in your App Shelf.

5) When the Messages App Store appears, tap the Manage tab.

6) To uninstall a desired iMessage App, slide its switch to the OFF position.

Standalone iMessage Apps cannot be temporarily disabled: they are permanently removed from the device as soon as their switch in the Manage tab is slid to the OFF position or their Home screen icon gets deleted.

Because standalone iMessage Apps put an icon on your Home screen.

To remove them from the device, simply do what you would normally do when deleting any other app on your iPhone: press the Home button to get to the Home screen, enter the icon jiggle mode by holding your finger on any icon, then tap the “X” in the upper left corner of an icon of the standalone iMessage App you wish to delete.

Again, this only works with standalone iMessage Apps. Their bundled counterparts cannot be deleted this way as they don’t have a Home screen icon of their own.

Standalone and bundled iMessage Apps can be deleted more quickly by opening the Messages app drawer open, then tap and hold an app until you see the app icons jiggle and hit the “x” at the top-left corner. 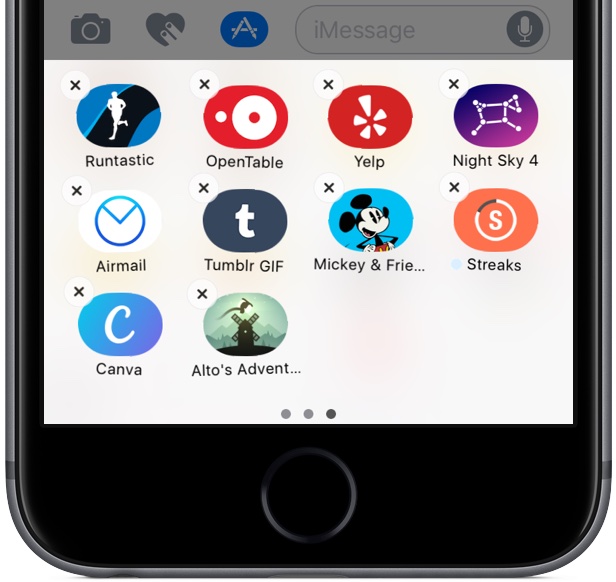 To finish, press the Home button.

This is the same as toggling the switches in the store’s Manage tab, meaning removing a bundled app from the app drawer only disable the app whereas removing its standalone counterpart actually deletes its Messages extension from the system.

Have ideas for us?

If you like our tutorial on downloading, using and managing iMessage Apps in Messages on iOS 10, please share it on social media. Also, don’t forget you can send us your submissions for future tutorial coverage at tips@iDownloadBlog.com.