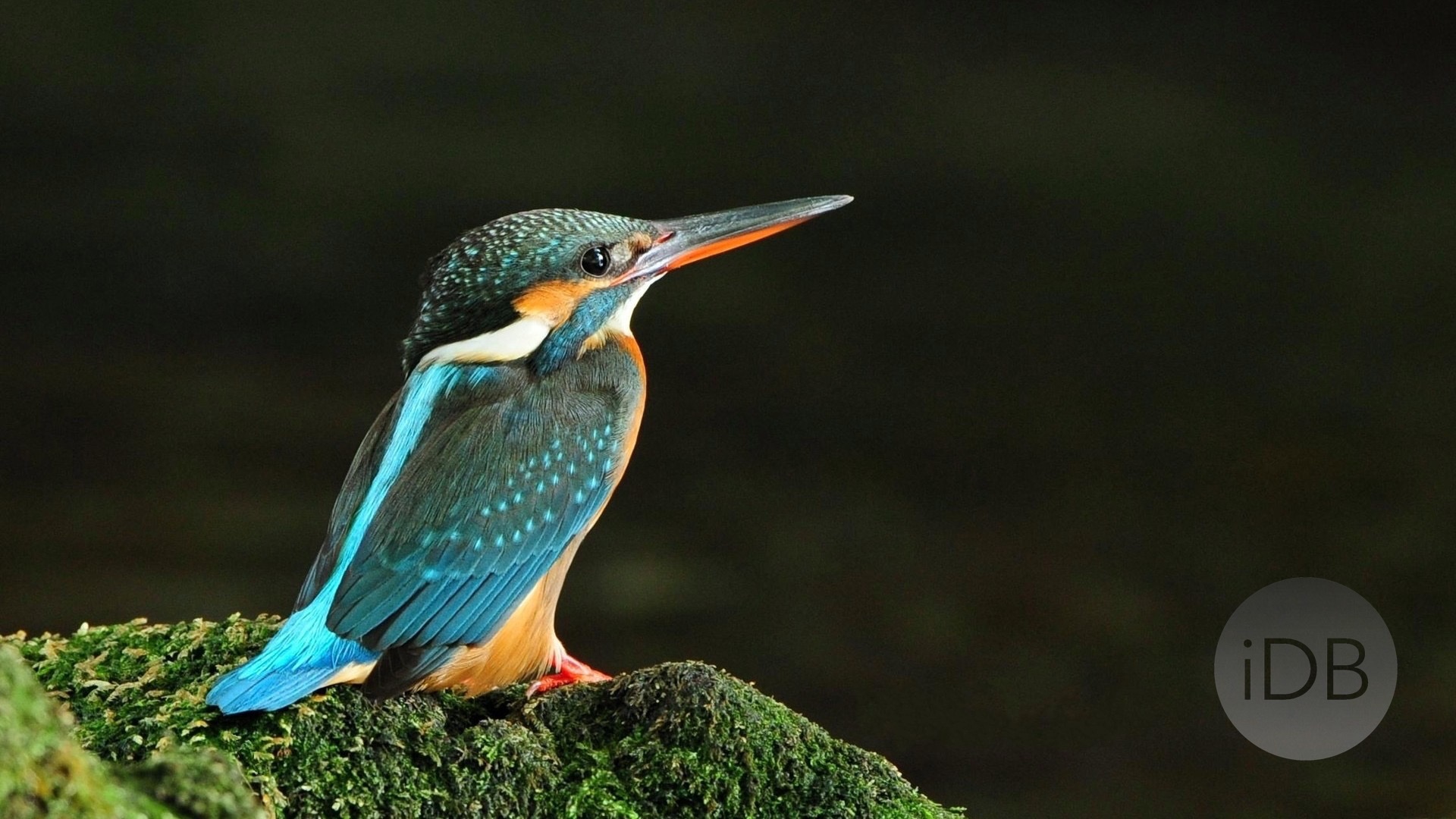 Adding watermarks to photos is an invaluable tool for photographers who want to put a company logo or information on a photograph to share the proper credits that made the photo possible.

It can be done manually in a variety of different kinds of photo-editing software, such as Adobe Photoshop or Pixelmator, but in this tutorial, we’ll show you how you can create an applet that automatically watermarks photographs for you.

I find photography fun and I’ve gone through the process to watermark photos once or twice before in apps like Pixelmator or Photoshop, but it wasn’t exactly a streamlined process. In bulk operations, this process quickly becomes cumbersome.

To make things a bit faster, you can simply create yourself a little applet that watermarks your images in less than a second. All you’re going to need is a Mac with the Pixelmator photo-editing app installed on it, a $29.99 download from the Mac App Store.

Creating a watermarking applet in Automator

To make an applet that will watermark your photographs or screenshots with a desired icon, follow these steps:

1) Launch the Automator app from your Mac’s Applications folder. 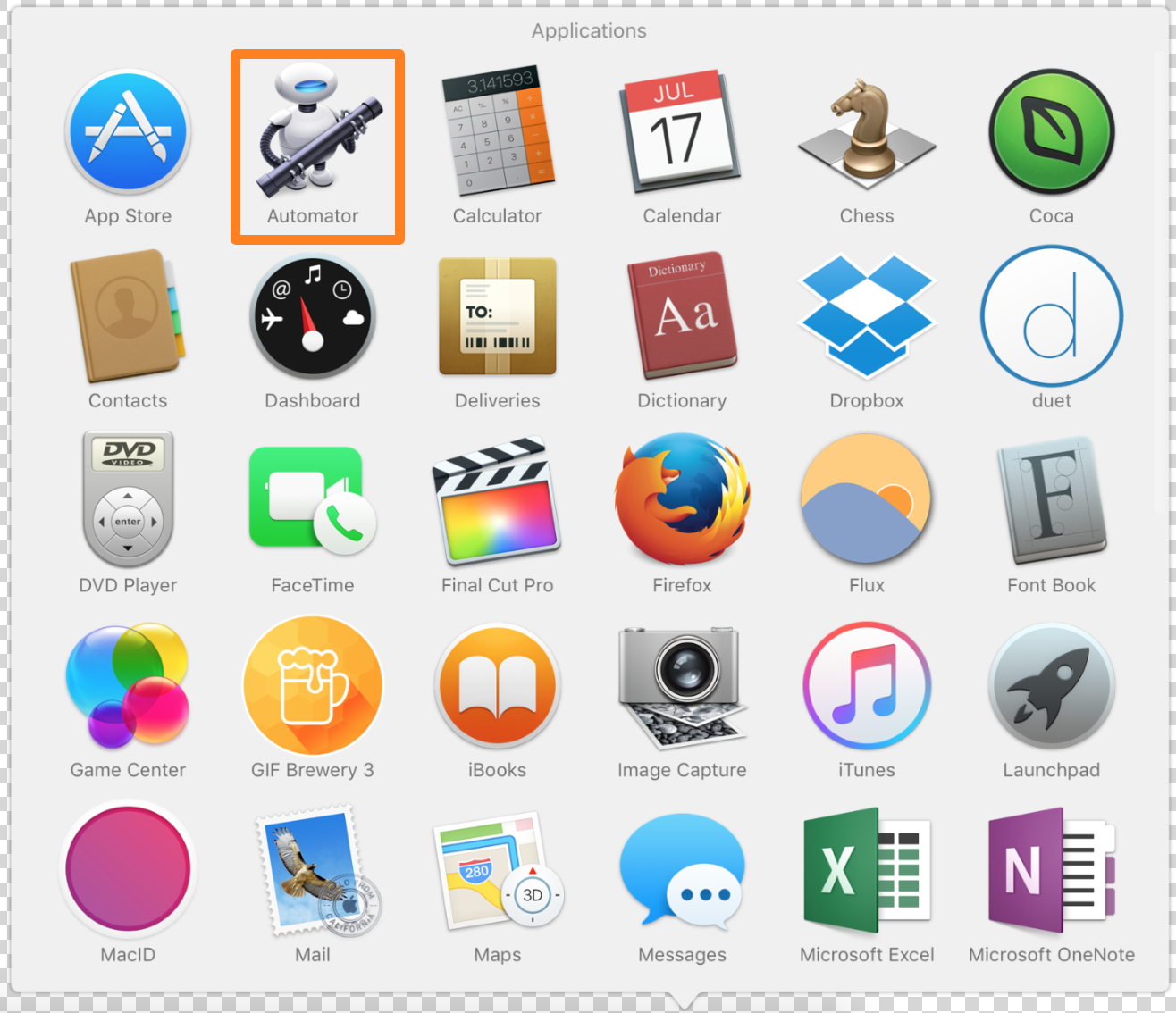 2) From the first window, you will pick the Application option and then click on the blue Choose button. 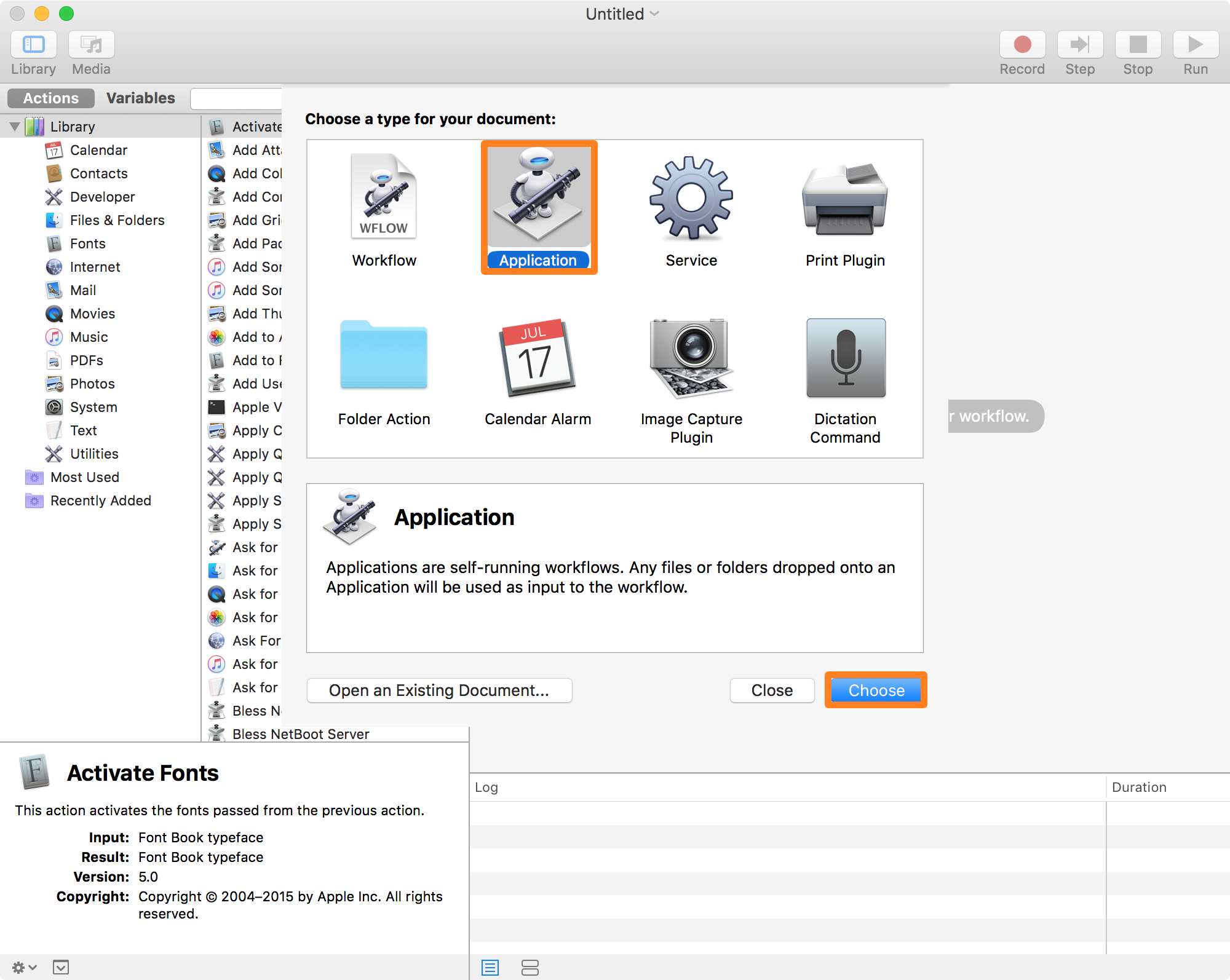 3) Next, you’ll double-click the Watermark Images action from the sidebar: 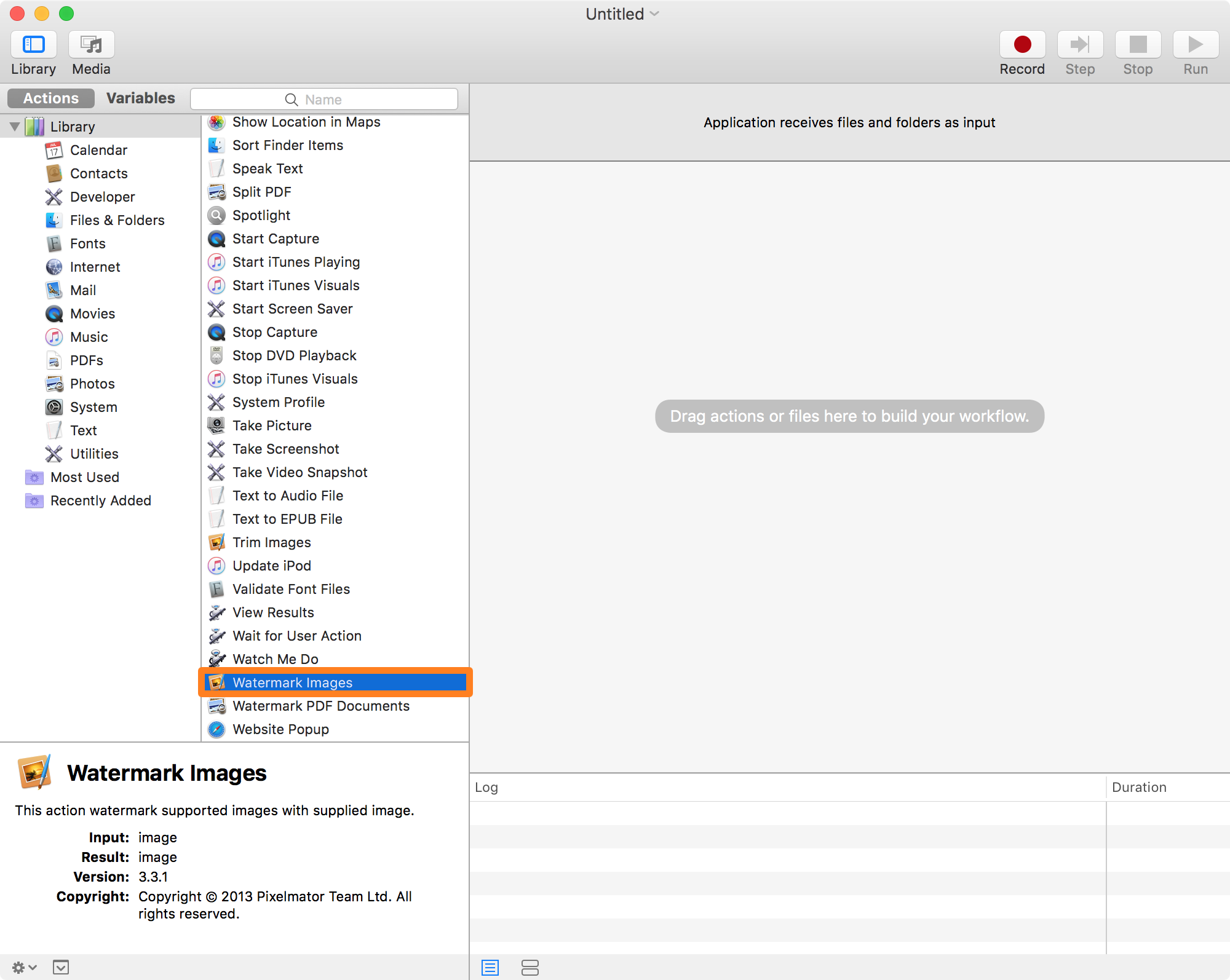 4) When you do this, Automator will recommend that you add another action to not only create a new watermarked image, but also to preserve the original image. I recommend this too, so click on the blue Add button. 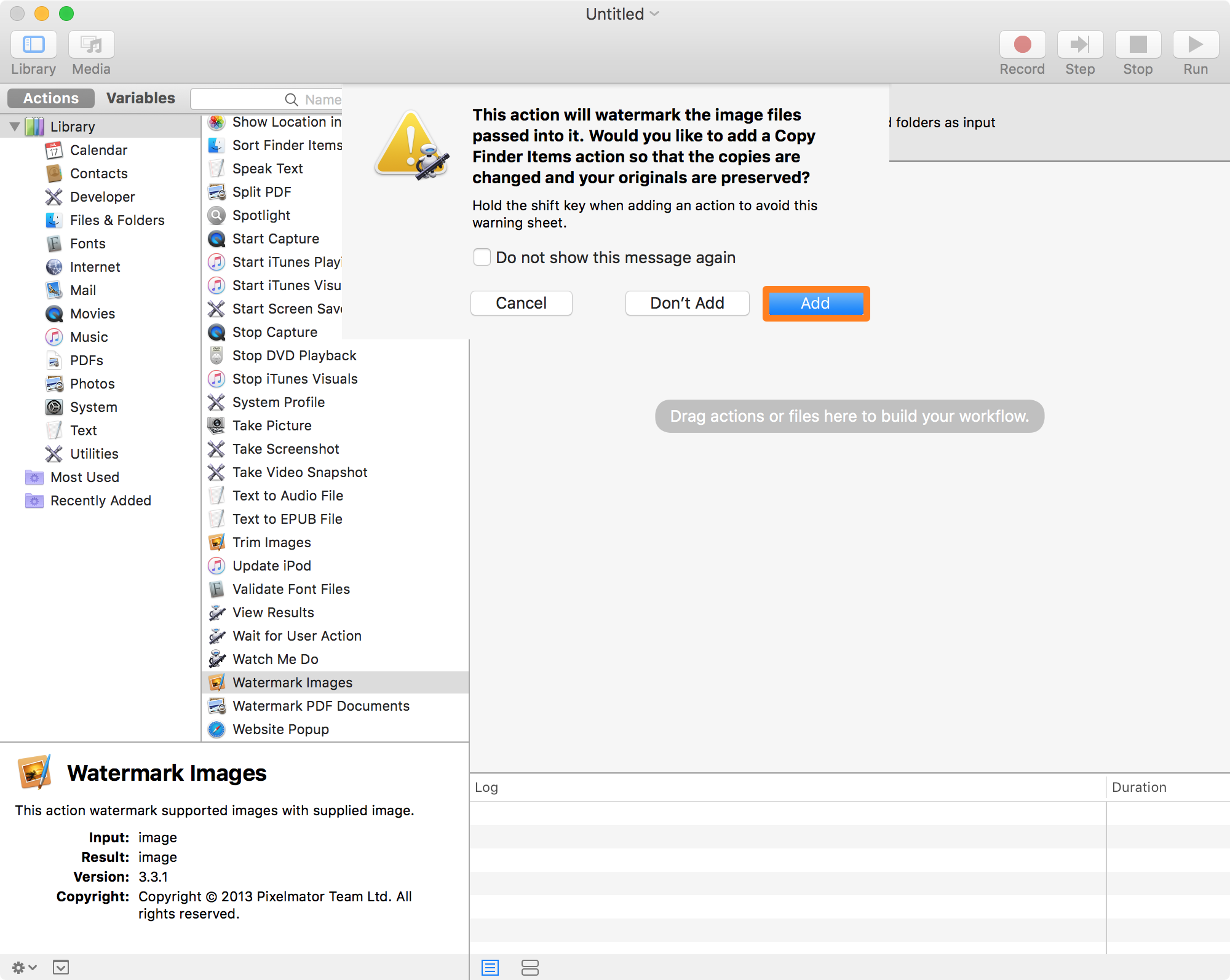 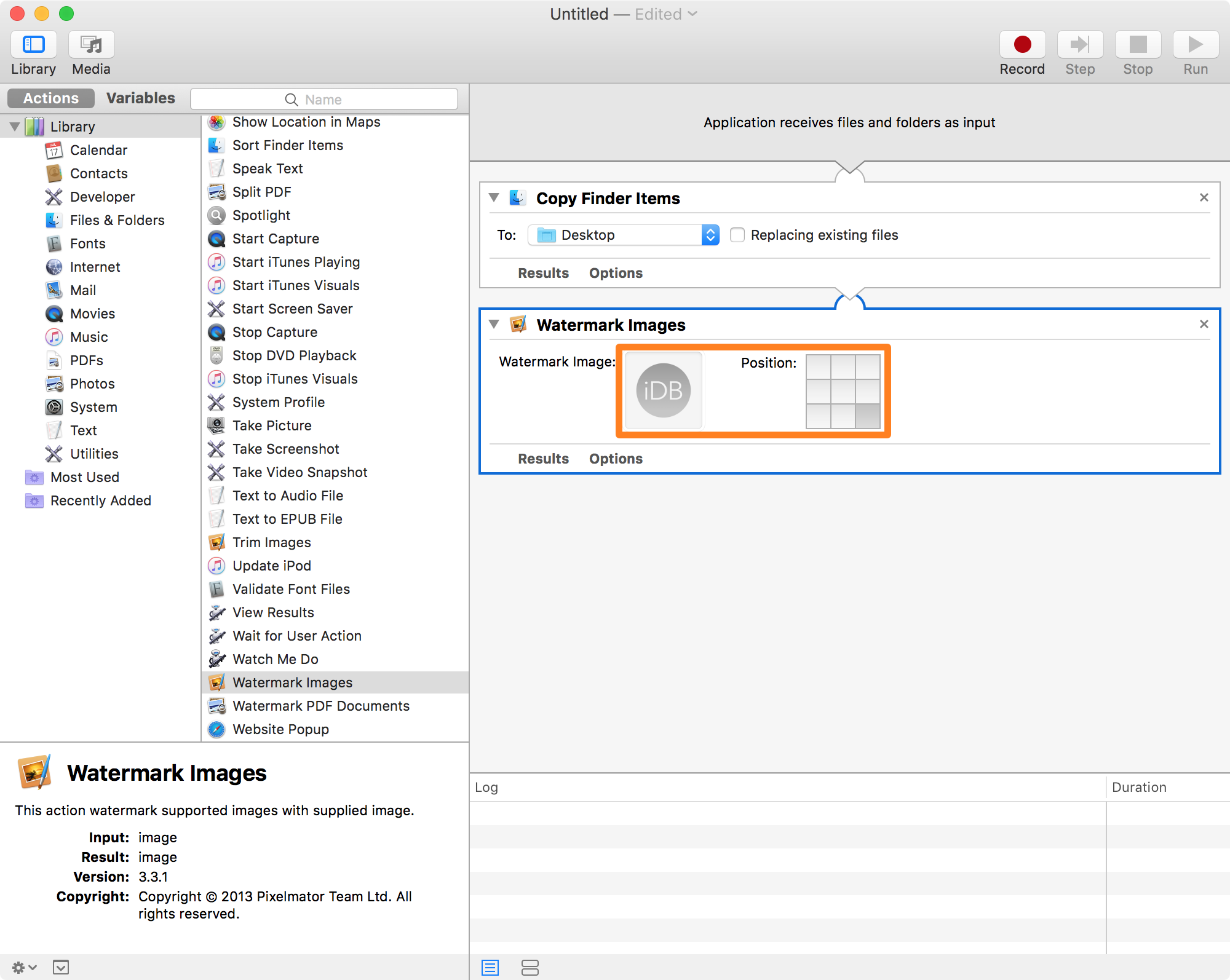 Note: We have selected the iDB logo for the watermarking and chose the bottom right position in the grid.

6) After selecting your watermarking icon and positioning, you’re going to go to File > Export… in your Mac’s Menu Bar. 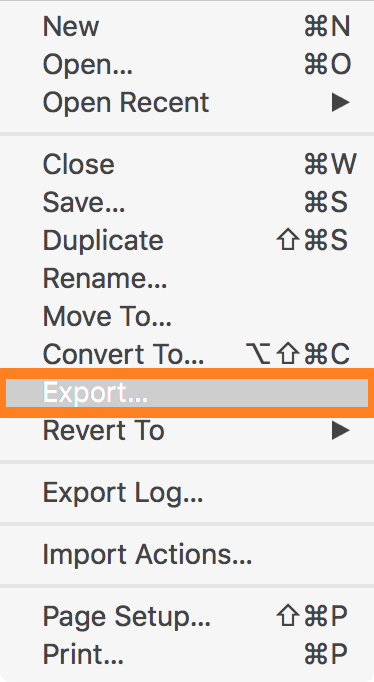 7) Now you’ll give your applet a name, select the Applications folder for the destination, and click on the blue Save button. 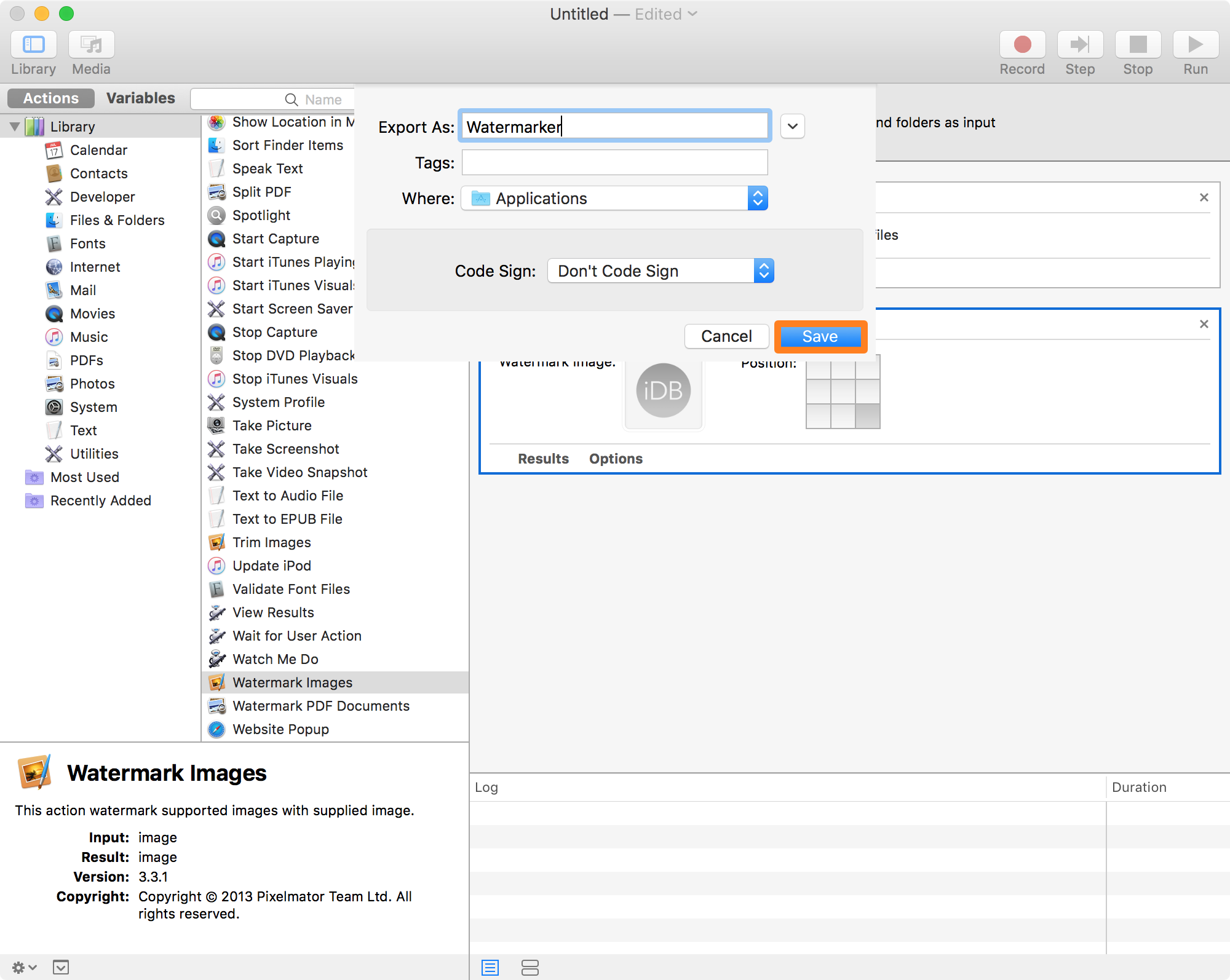 8) Now you’ll want to drag the applet you made into your Mac’s Dock.

You have successfully created an automatic image watermarking applet!

Utilizing the applet for photograph watermarking

After you’ve created the applet, using it is very easy. I recommended putting it in your Mac’s Dock because it’s going to make using the applet ultra fast.

1) Find an image file that you want to watermark. In this tutorial, we’ll be using a bird wallpaper we found on Google.

2) Drag the image file onto the applet icon on your Mac’s Dock: 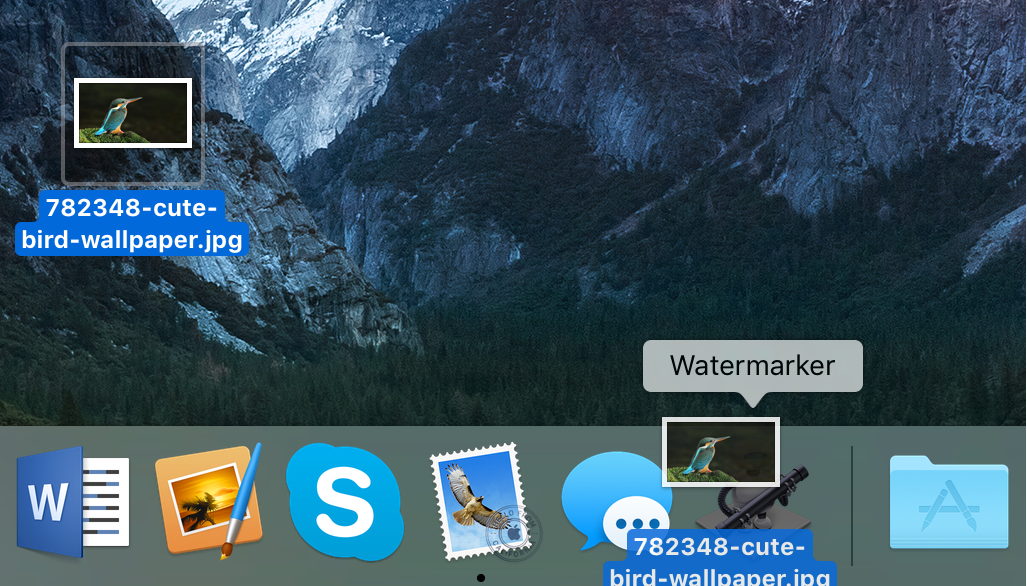 3) You will see an icon that looks like a gear cog appear in your Menu Bar momentarily while the app works:

4) The app will now save a new image to your Desktop with your watermark embedded in the selected position of the image: 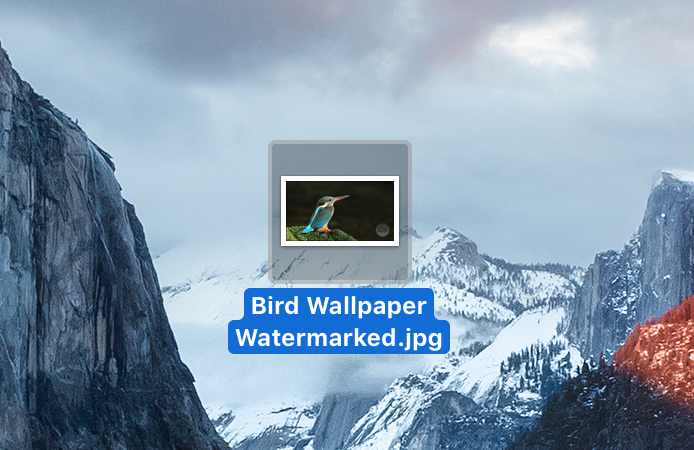 5) You can open it with Preview to verify the watermark was baked into the image: 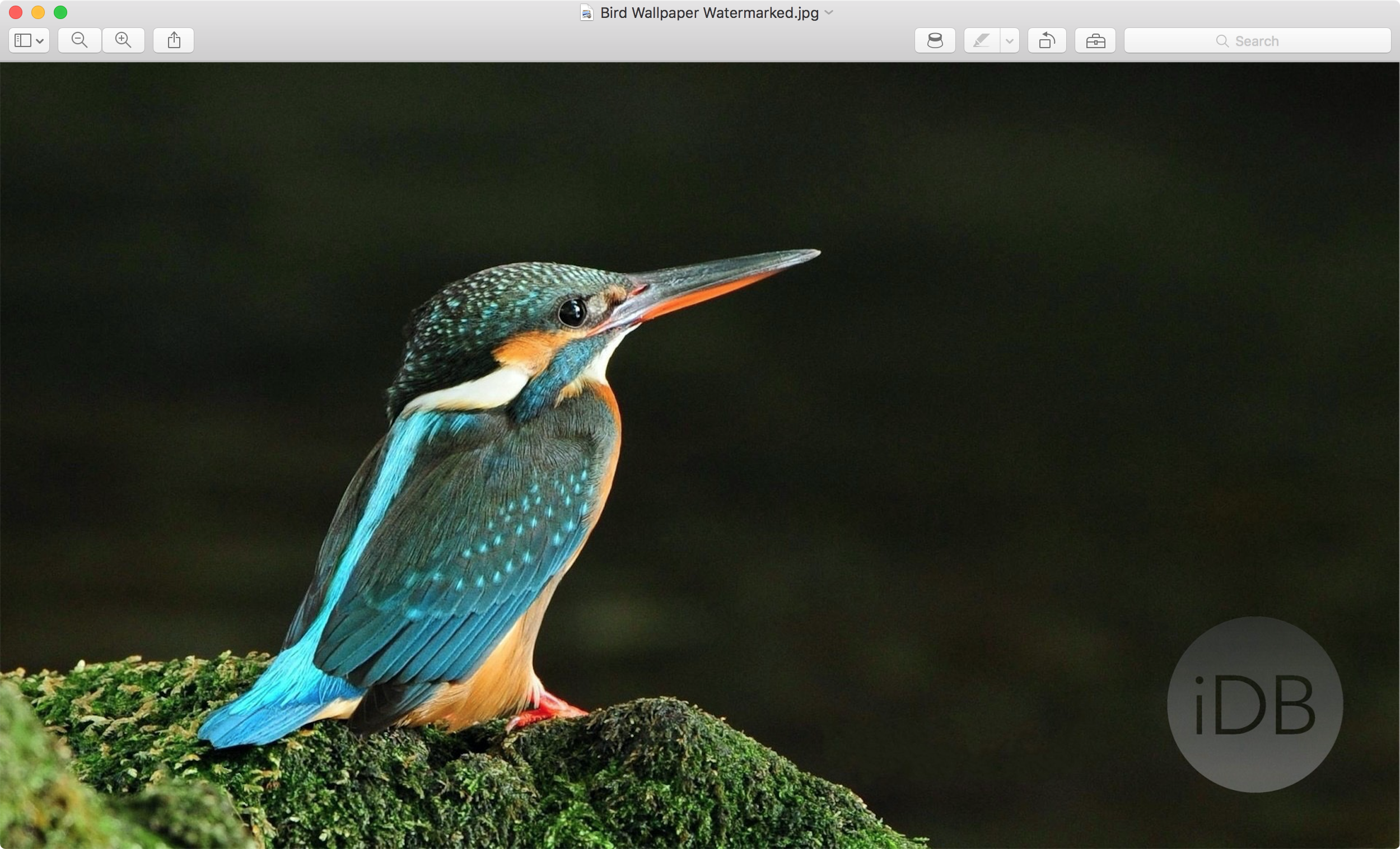 Here is a before and after comparison of the image with and without the watermark: 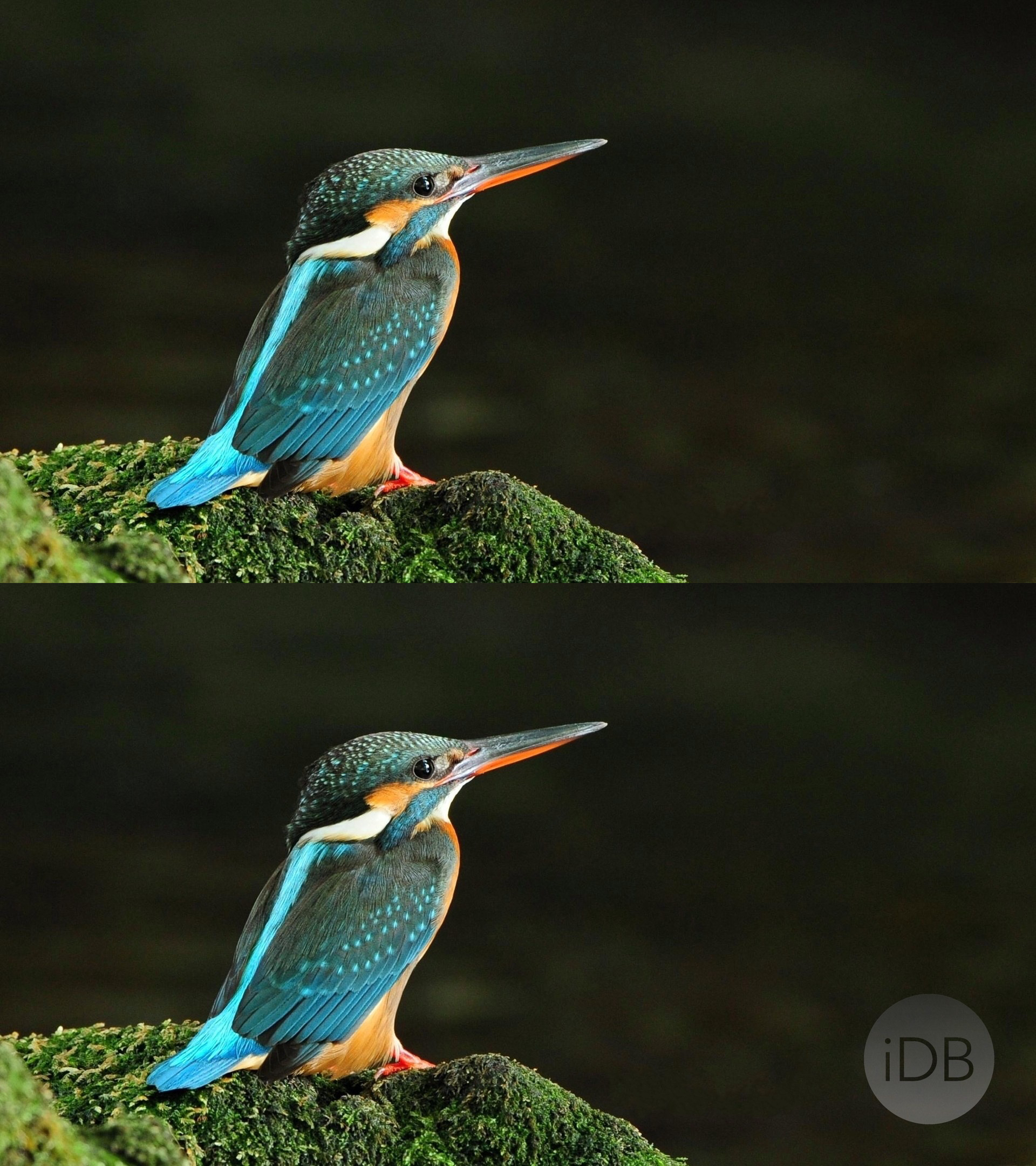 The Pixelmator app is required to make this applet and is a $29.99 download from the Mac App Store, but it often goes on sale, so you can always keep your eye out for a time when it goes down in price.

Another thing we wanted to tell you is you can select multiple photographs at once and drag them all into the applet icon on your Dock in one fell swoop, rather than one-by-one, and it will add watermarks to all of your photographs. With that in mind, you can save a lot of time, because it only takes a couple of seconds to do them all!

If you’re one who needs a faster way to add watermarks to any of your photographs, either because you make tutorials or because you’re a professional or amateur photographer, this is a wonderful way to power through the process without wasting any more time than you have to.

Also Read: Make an applet for your Mac that quits all apps instantly