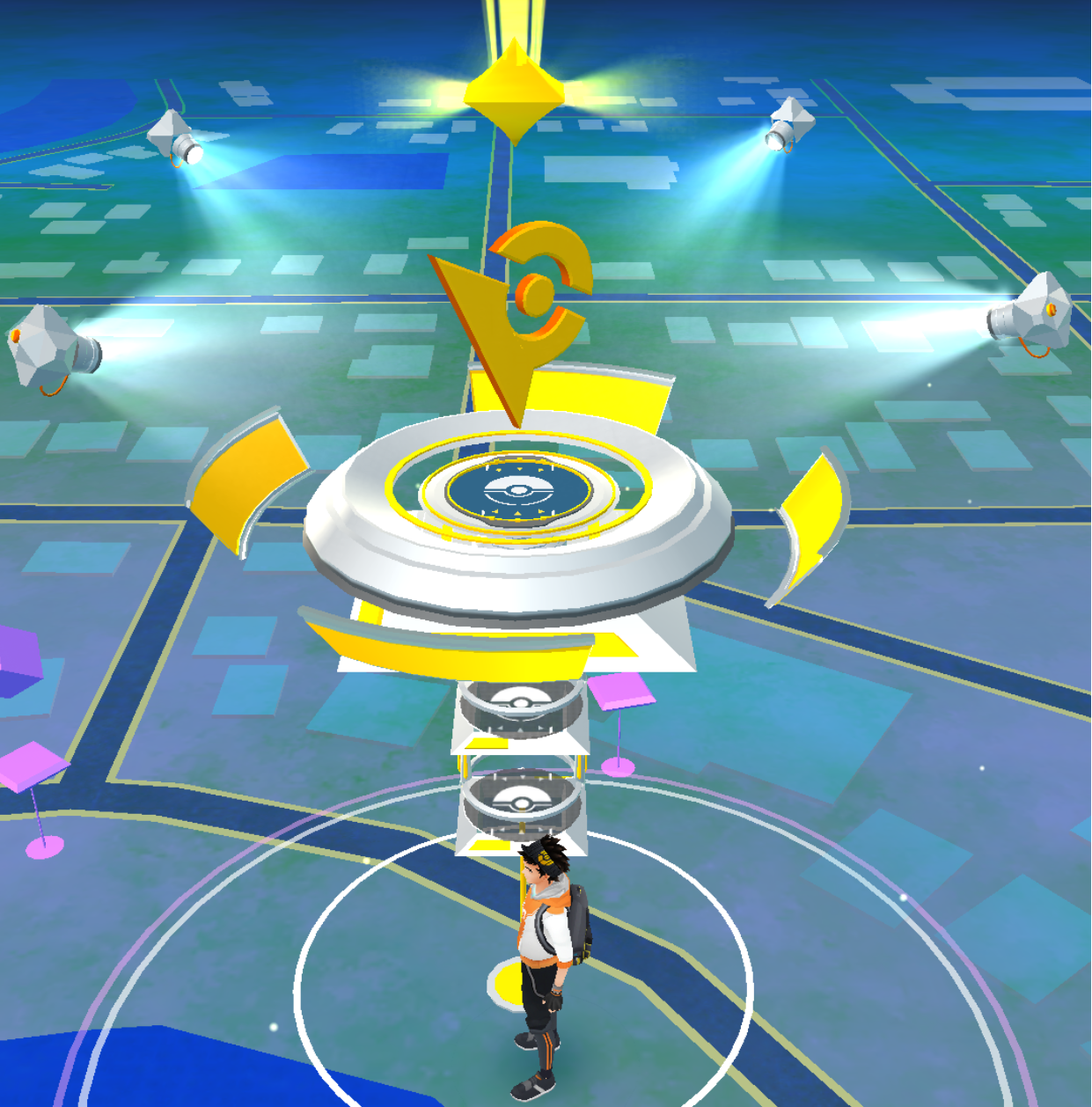 One of the more misunderstood features of the hit mobile game Pokémon GO are gyms. These are essentially arenas where you can compete with other trainers and claim the gym for your own team.

In this piece, we’ll talk all about gyms and discuss the gameplay, Pokémon preparation, and team gym claiming.

What are gyms and teams?

A gym is basically a spot where you can compete with other trainers. After a player on a different team from yours claims a gym, you can attempt to battle their Pokémon to claim the gym for yourself.

At level 5, you unlock the ability to compete in gyms, and you’re also asked to pick a team: Blue (mystic), Red (valor), or Yellow (instinct). Every other player gets the same prompt to pick a team, so you’ll be competing against everyone who isn’t on your designated team, and you’ll work with the people who are on your team to secure a gym.

No one team is better than the other. It’s basically just a color, and every team attempts to do the same thing: secure gyms. So keep that in mind when selecting your team. If you’re in a region where most people pick Red, you should do yourself a favor and pick something more diverse, such as Blue or Yellow so you can actually battle. The same goes for other teams.

Do you lose your Pokémon?

One of the most frequent questions I get asked is whether or not you lose your Pokémon if you lose a battle. The answer is no.

When you lose, your Pokémon faint, and you will have to use revives to bring them back to consciousness again, and then you may need to use potions to further heal their health for additional battles. After fainting, once you’ve healed their hitpoints back up, you can re-use them in another battle, and several other battles after that.

When you claim a gym, you are supposed to try and be the first person to place a Pokémon in the empty gym for your team. If you leave a Pokémon at a gym, you won’t lose them. They will be left there, and will be unavailable until they faint from another player battling against them, but after they faint, you can just revive and heal them and be on your merry way.

How do you battle?

As you are walking around, you’ll spot gyms. If you’re in the mood to battle other players’ Pokémon, you can tap on a gym that has been claimed by another team. For example, since my character is on the Yellow team, I can tap on this Blue team’s gym to battle. 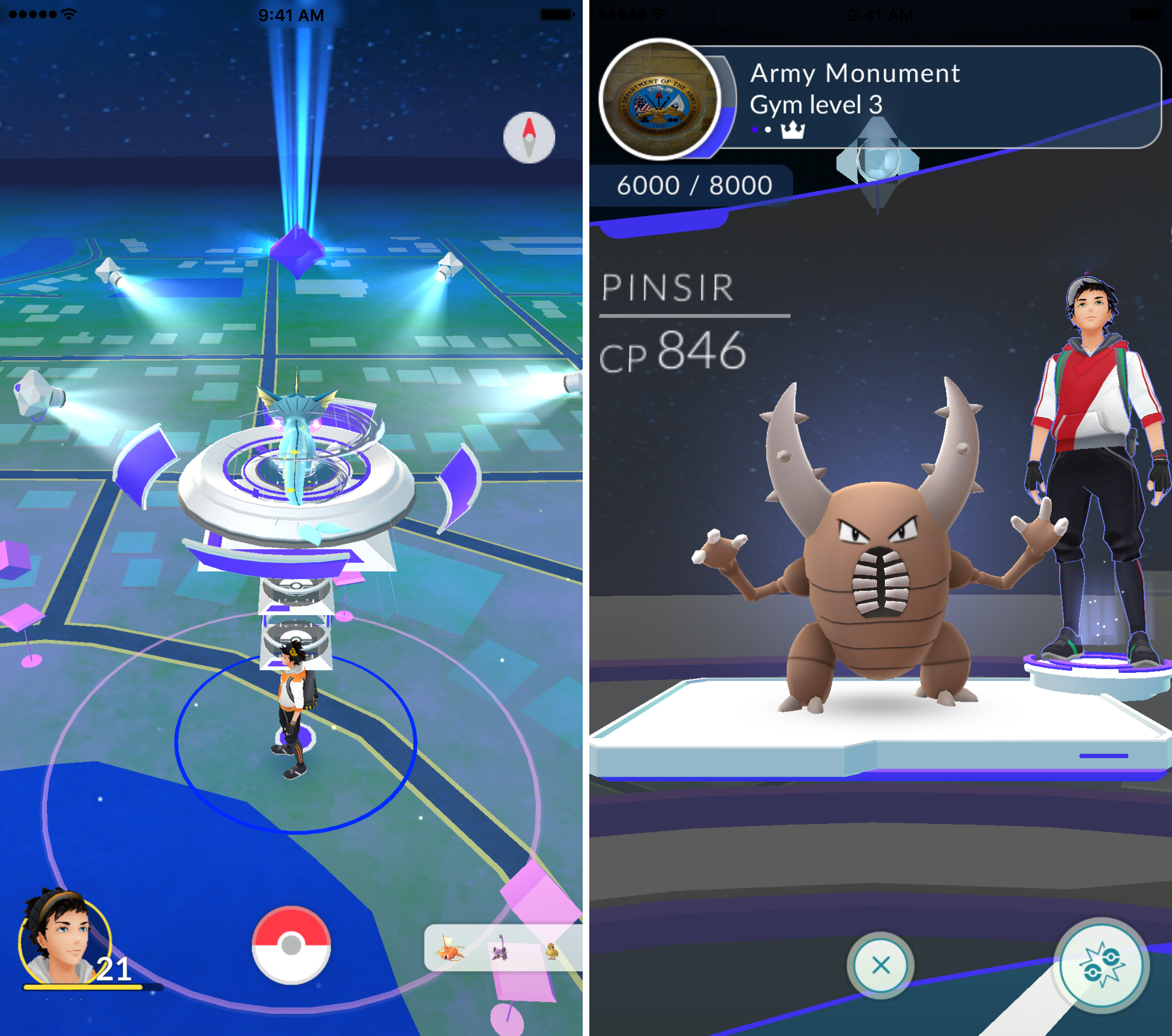 By tapping on it, I can see who’s in the gym. The gym will show the gym’s level, as well as the Pokémon residing inside that I will have to try and beat. In this case, it’s a level 846 Pinsir, and I can scroll left and right to see other players and their Pokémon that I’ll have to battle after I defeat the Pinsir.

Because I have much stronger Pokémon than that level 846 Pinsir, it would be a good idea to accept the challenge. You can tap on the battle button at the bottom right of the app, and the gym will ask you to select the Pokémon you want to use for the battle. You can select up to six of your Pokémon: 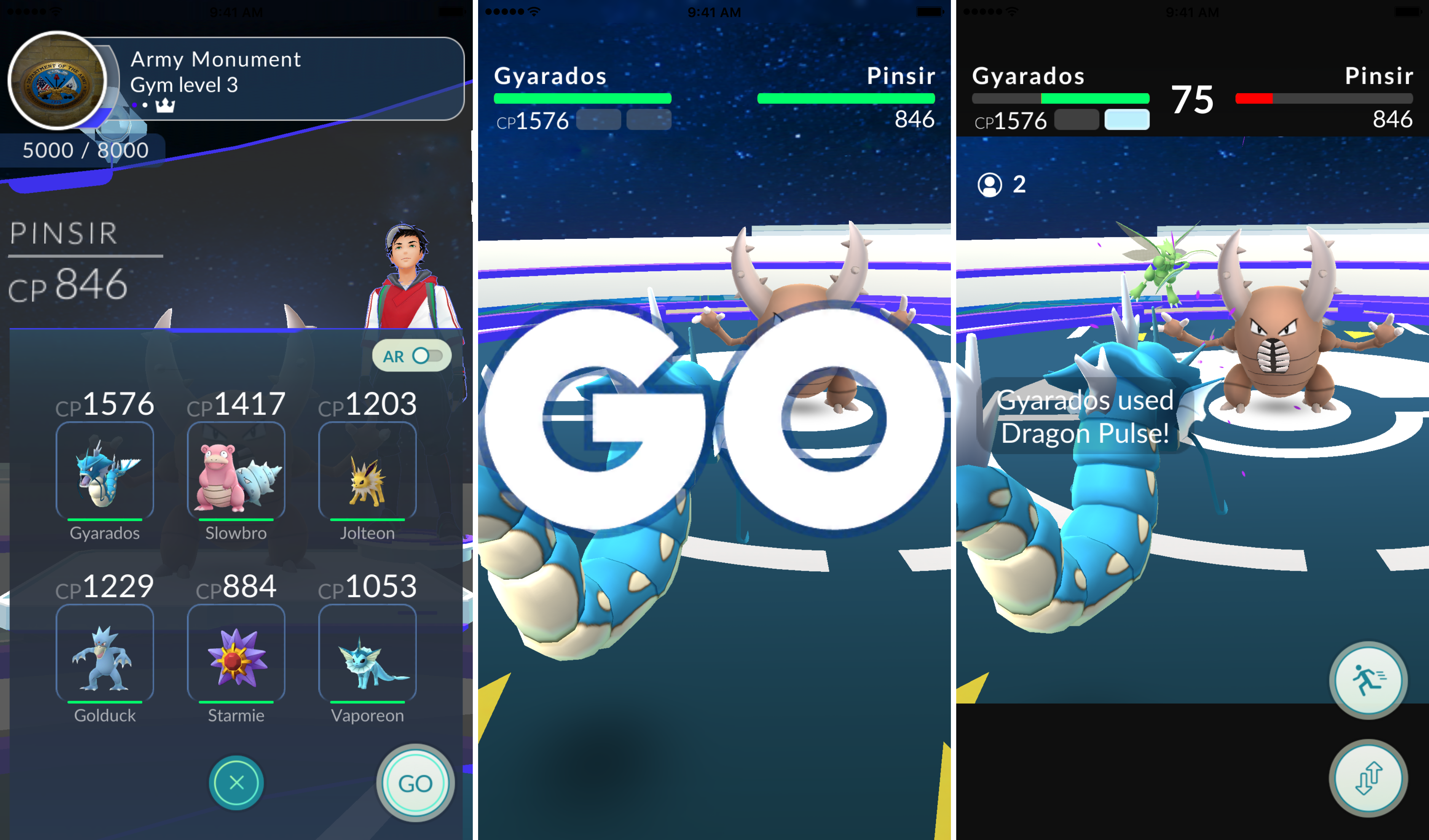 One of the things you’ll notice is that the app automatically selects the Pokémon that might be best for the battle you’re about to take on. It doesn’t always work out that way, but it seems pretty smart in knowing that I want Pokémon with strong attacks and have effective types against the Pokémon I’ll be fighting.

You can switch out any of the Pokémon that you don’t want to use by tapping on them and then selecting a new one from your Pokémon inventory. When you’re ready, you can tap on the Go button.

Once you’re in the arena, there will be a countdown right before the battle. You’re going to want to spam-tap on the other player’s Pokémon, as you want to attack it as quickly as possible. Some Pokémon, like Slowbro, are very slow, while other Pokémon, like Gyarados, are very fast. So keep this in mind.

Be mindful of your and your opponent’s hitpoints, which appear under the Pokémon name at the top. Just below that is the special attack bar. When this fills up after you’ve used the regular attack enough times, you can tap and hold on the other player’s Pokémon and your special attack will be unleashed, dealing a great deal of damage to your opponent’s Pokémon.

Remember to continue spam-tapping after the special attack is completed, and also keep in mind that some Pokémon can use their special attack more frequently than others. At some points, you might see your opponent starting their special attack. If you do, you can rapidly swipe left or right, and there’s a chance you’ll dodge the attack and won’t take any damage.

During fights, you’ll see alerts, such as whether attacks are effective or not. If an attack is effective, it means you’re using a very good type of Pokémon against the Pokémon you’re fighting. If you see a lot of noneffective alerts, you may want to swap out for a Pokémon that better suits the fight.

If none of your Pokémon are doing you any good, you can also run away from the battle. Running is always an option for those who are afraid of losing!

Depending on the level of the gym, you may have to complete the battles several times. Be sure to heal your Pokémon and revive fainted ones in between battles. You can do this by going into your items bag and tapping on the revive item, and then tapping on Pokémon that have fainted. You can then tap on the potion items to further heal their hitpoints in full: 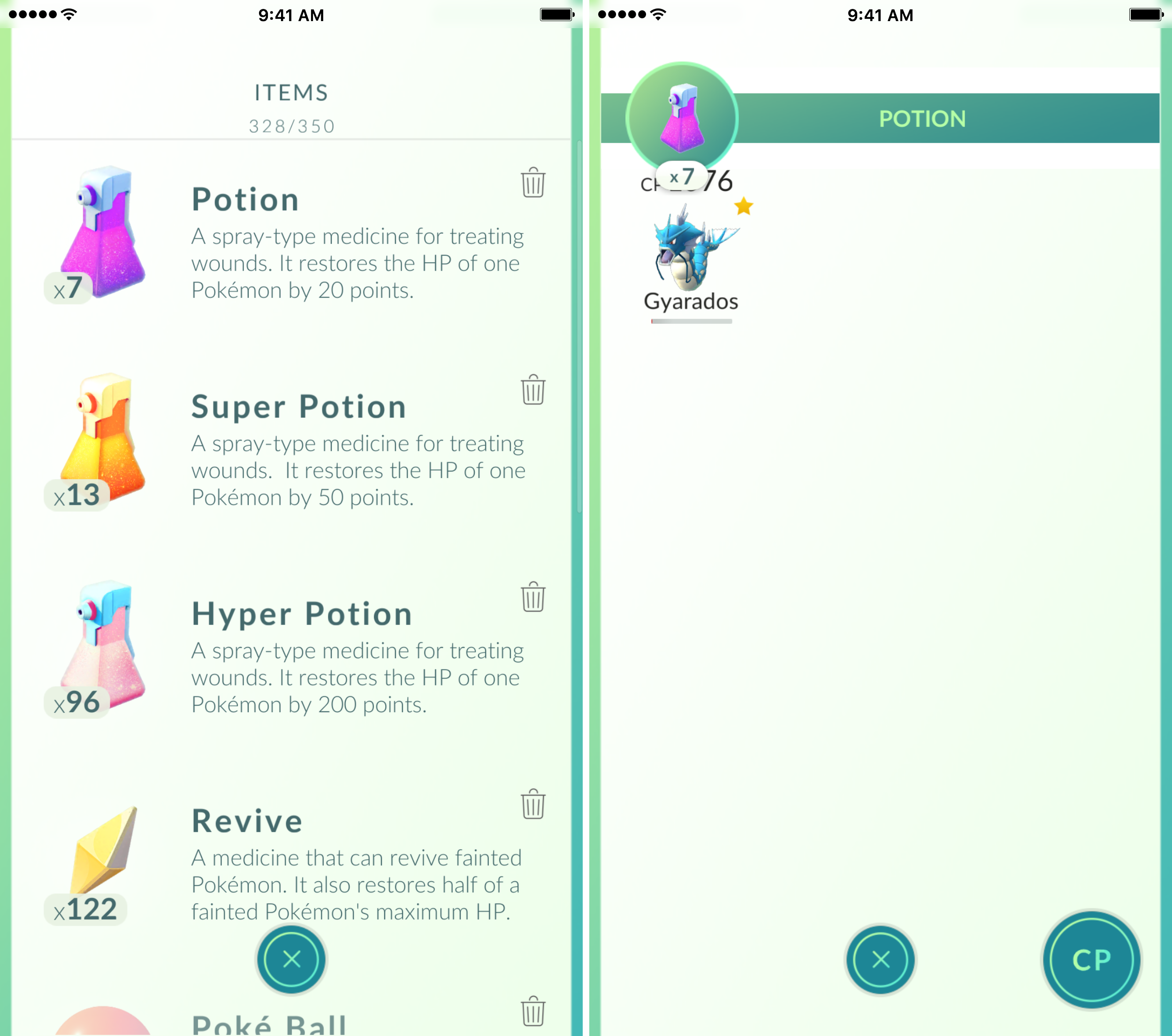 Once finished, you can go back into the gym and battle again and again, if necessary.

When the gym has been fully defeated (sometimes after fighting it multiple times), it will turn White, rather than Blue, Red, or Yellow. If you should ever come across a White gym, try to tap on it as quickly as possible and then click on the Add Pokémon button at the bottom left of the screen to place a Pokémon.

The first person to place a Pokémon will claim the gym for their team, allowing other teammates of the same color to add their Pokémon as well, which makes it a stronger gym and makes it harder for other teams to battle and take from you. The more you battle your own gyms, the higher you’ll boost its rating, so you may want to do it over and over again.

You should select your strongest Pokémon, which in this case is my Gyarados, and then just leave it there. It will be unavailable for future gym battles until an opposing team crushes your Pokémon. When they do, they will take the gym, and you will have to use potions to heal your Pokémon. Fortunately, your Pokémon never faint at your gyms, so you’ll never have to use revives.

It’s possible that someone else around you might be faster than you, so don’t be frustrated if you get an error message because someone from another team claimed it first. Just try again. 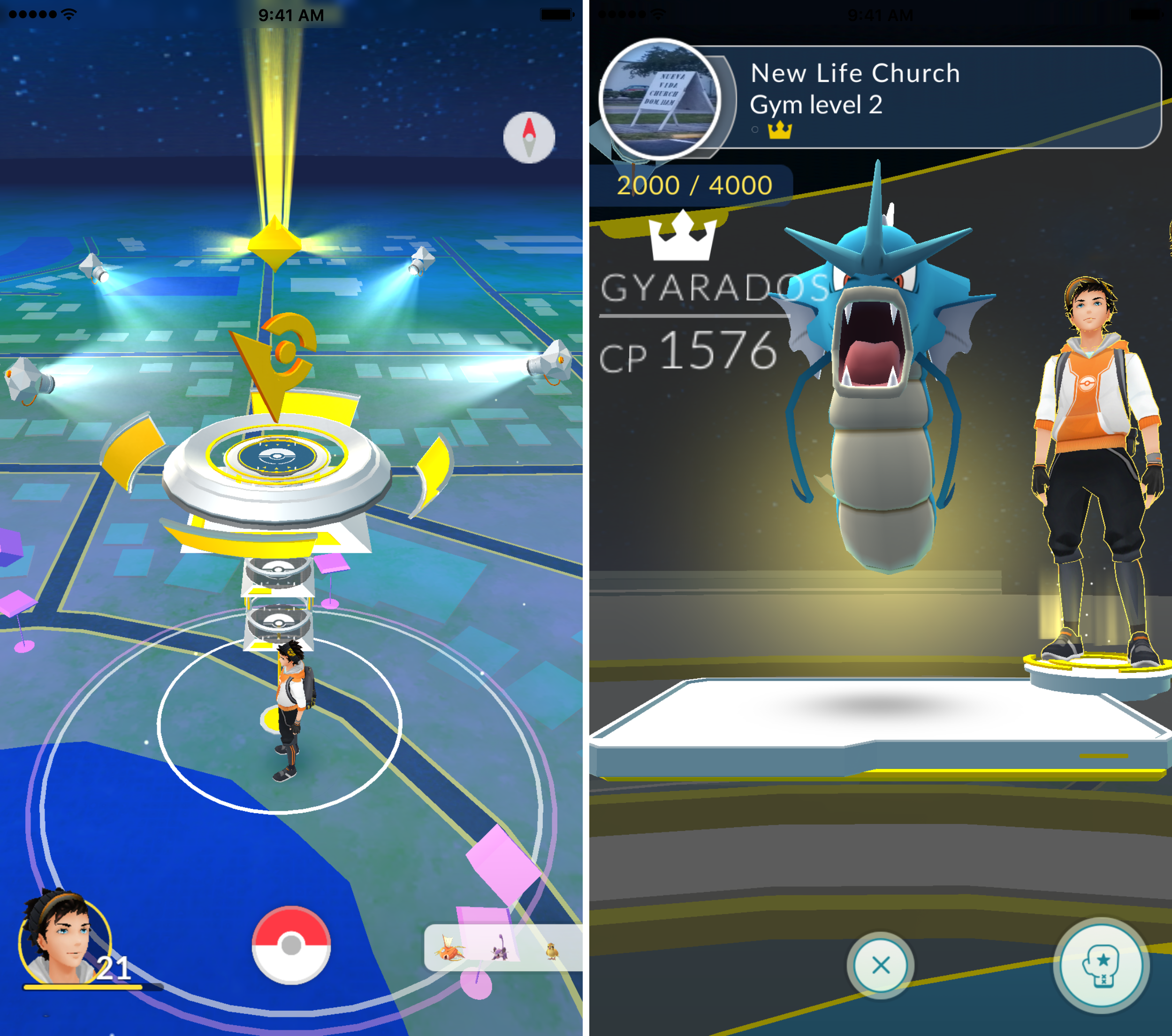 Once the gym has been claimed for your team, other teammates might attempt to add their Pokémon too. This will strengthen the gym for your team.

If you should ever come across a gym that is already under your team, you will need to tap on the boxing glove button at the bottom right of the interface, as shown above, to fight against your team’s Pokémon. Once you beat them all, you will be able to place your own Pokémon, as you’ve proven your worthiness. Doing so will make your team’s gym stronger.

Battles typically only take a few minutes, so you may yield more experience playing gyms than you will walking around catching Pokémon, which is good to know for people who live in the middle of nowhere.

On the other hand, if you live somewhere where Pokémon spawns are common, you may actually get more experience from catching Pokémon than gyms. So keep this in mind.

Gyms are a fun part of Pokémon GO that are often overlooked because people are too busy simply walking around and collecting and evolving Pokémon. Gyms allow you to actually use the Pokémon that you’ve worked so hard to collect and power up, so be sure to take advantage of them for some fun once in a while.

If you’re not already playing Pokémon GO, you can download it for free from the App Store.