Pokémon GO took the mobile device nation by storm. The game has already been downloaded so many times that it’s hit the top free app charts on both the iOS and Android platform, and it seems you can’t go anywhere anymore without seeing amateur Pokémon trainers wandering about.

In this piece, we’ll discuss the importance of PokéStops in the game, and what you can do to utilize them to their fullest potential.

A PokéStop is basically a location of interest that you can move into close proximity of to utilize a variety of features. 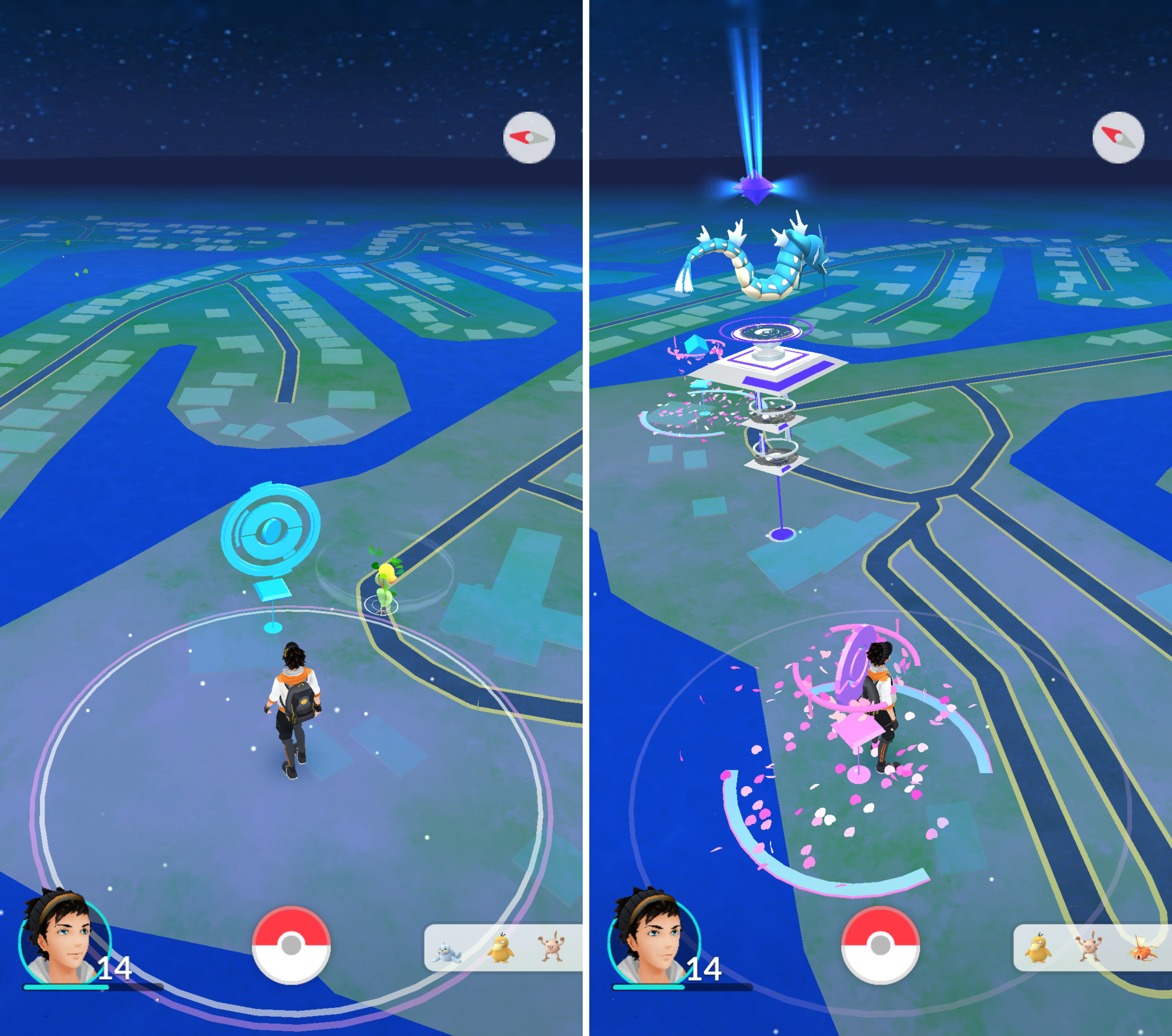 Every time you open the Pokémon GO app, and you look at your map, you may occasionally see what looks like a little blue cube floating in the air. Sometimes, you’ll see pink confetti raining down from it. These are PokéStops, and as a Pokémon trainer, you’ll want to visit these as often as possible because they’re very useful.

The many uses of a PokéStop

As you walk up to PokéStops, which are scattered all throughout your area, the floating blue cubes will transform into what looks like a floating blue PokéBall. This means you’re close enough to use the PokéStop.

To use it, just tap on it. You’ll get an interface like the one below: 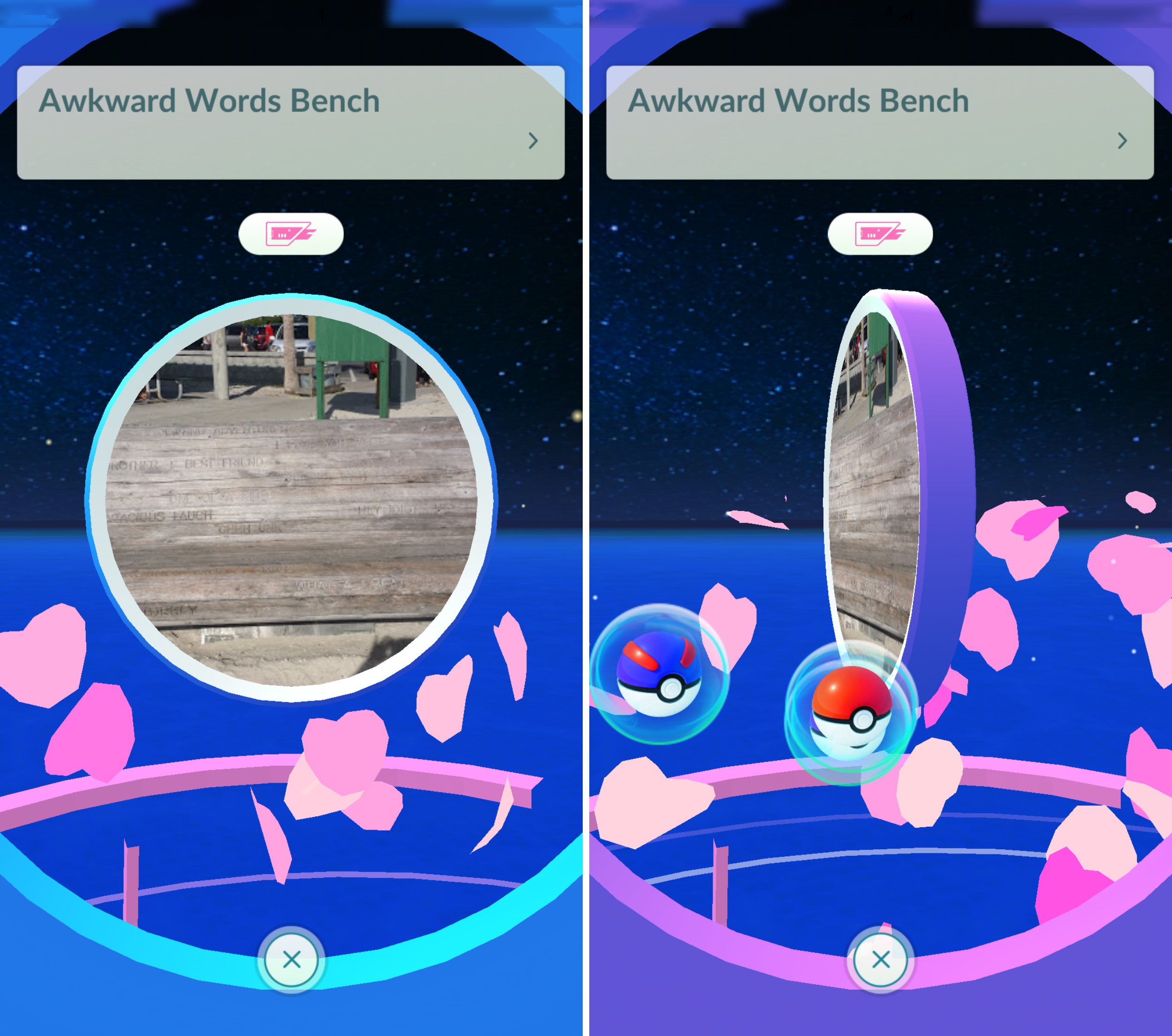 This particular PokéStop, entitled “Awkward Words Bench,” is a landmark at a local beach in our area. When we tap on it, we’ll see a photo of the location, and the background will be blue. What you want to do is swipe on the round photo, and the PokéStop will provide you with items.

The items will always be completely random, and it takes about 10 minutes for the items to respawn again, so don’t be afraid to wander away after collecting your items; you can always come back for more later. Some of the items you can get from a PokéStop, depending on your level include:

After you take the items, the background will turn pink. The floating PokéBall on your map will also turn pink, and when you walk away from it, the floating cube will be pink as well. This simply indicates that you’ve already drained the PokéStop of its items, and it will turn blue again when more items are available for the taking.

PokéStops will have all kinds of different names and photographs depending on your area, so this is something to keep in mind.

PokéStops are also useful for luring Pokémon. If you’ve ever noticed what appears to be a pink-colored confetti raining down from the PokéStop on your map, this means that you or someone else has implanted a lure into the PokéStop, and this increases Pokémon activity in the area surrounding the PokéStop.

Lures are only temporary, but they’ll last a great deal of time. You also don’t have unlimited lures, so be sure to use them wisely. You’ll want to place them in areas where you plan on staying for a while, because you wouldn’t want to waste a lure and then leave your location, as it wouldn’t help you, just the others who visit the area instead.

Why to play in PokéStop-rich areas

Ideally, you want to go for walks in places that are rich in PokéStops. Why? Because you want to keep the PokéBall and item supply incoming so that you don’t run out. Nothing feels worse than running out of PokéBalls, because then you’ll have to either do a lot of walking to collect more balls, or you’ll have to buy some with in-app purchases.

When you play in PokéStop-rich areas, you’ll typically also see a lot of other Pokémon GO players. This is a good thing, because often other people have already placed lures, so you don’t have to waste your own, and this means you can benefit from the lures and catch lots of new Pokémon. You’ll also occasionally hear other players shout, “Hey! There’s a [insert Pokémon name here] over here!” and this is your signal to start walking over to them to catch that Pokémon you don’t yet have and really need.

Additionally, if you’re playing in a place with lots of PokéStops, you’re going to collect lots of other useful items, such as potions and revives, which are going to be useful in gym battles, and when the time comes, player versus player battles. Of course, the latter isn’t available in the game just yet.

PokéStops play an essential role in playing Pokémon GO, and if you’re going to make a fun evening out of it, it’s a good idea to utilize them and play in PokéStop-rich areas. Take advantage of their constant item dispensing, as well as their Pokémon-luring capabilities to get the most out of your Pokémon GO experience.

If you’re not already playing Pokémon GO, and you want to give it a try, you can download it for free right now from the App Store.

Stay tuned to iDB for additional Pokémon GO tips and tricks. If you want to know how to do something specific, let us know in the comments!