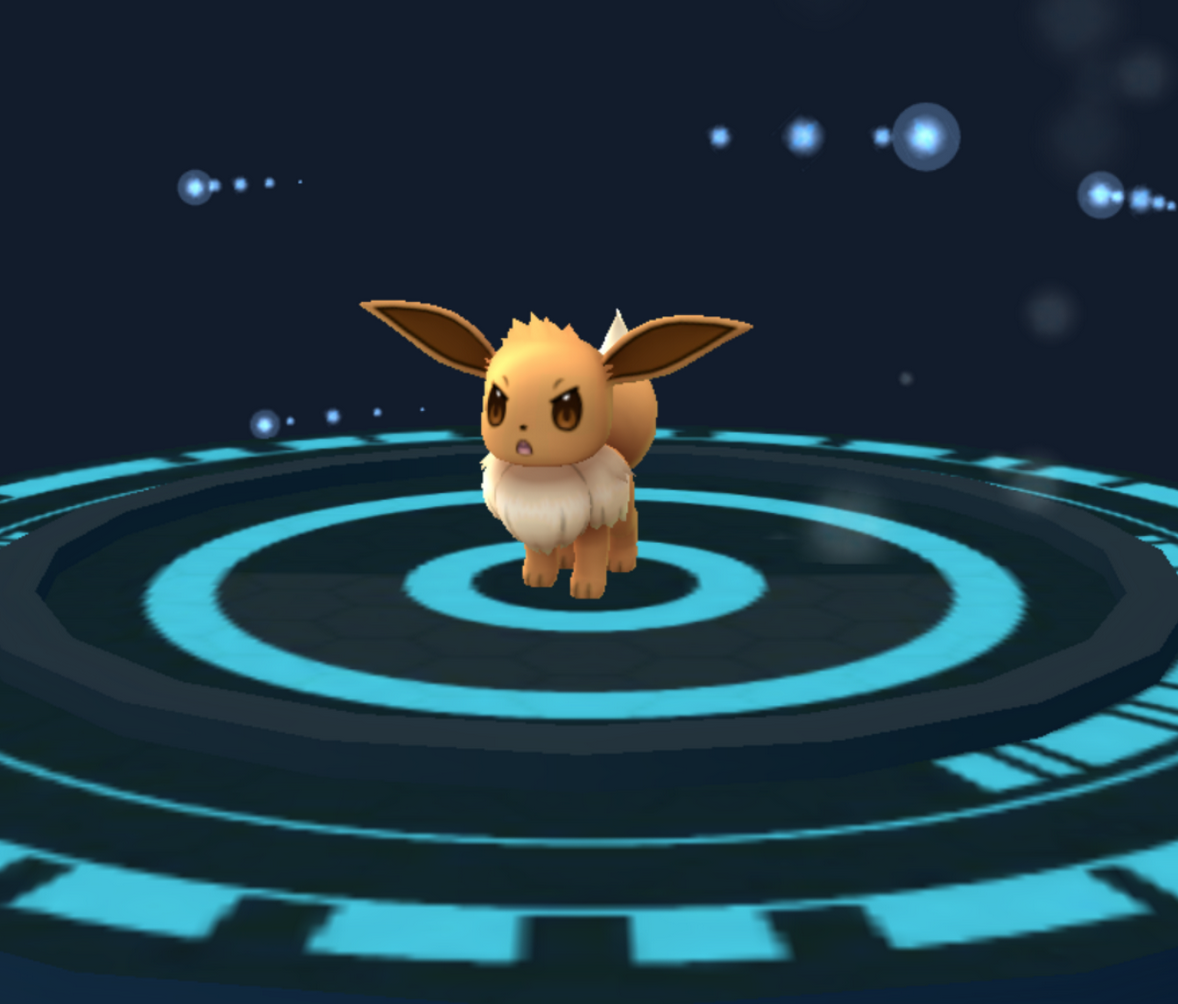 Eevee is an unusual Pokémon in the hit mobile game because unlike other Pokémon, it can evolve into three possible outcomes. Those three are Flareon (fire), Jolteon (electric), and Vaporeon (water).

Typically, when you evolve an Eevee, the outcome is going to be 100% random, but as the game publisher Niantic confirmed this week, there is a small cheat that you can use to actually control what your Eevee evolves into, and we’ll talk about that in this tutorial.

Why to choose what Eevee evolves into

The point of Pokémon GO right now is to collect as many Pokémon as you can, and if you already have one of the evolved forms of Eevee, then you will want to eventually collect the other two, as well.

One of the more common evolved forms that you see everywhere is Vaporeon, and this is because most players keep them for the reason that they’re super easy to power up and use to win gym battles with. But if you’re looking for a Flareon or a Jolteon, you may want to take advantage of a cheat to guarantee you get one.

How to control what Eevee evolves into

If you want to control what Eevee evolves into, the trick is to give it a special nickname prior to evolving it. Here is how this works:

Doing this is easy. Just bring up your list of caught Pokémon and find Eevee on your list, then tap in its name to edit it. In this example, we will make Eevee evolve into a Jolteon by nicknaming it Sparky, and then using 25 Eevee candy to evolve it: 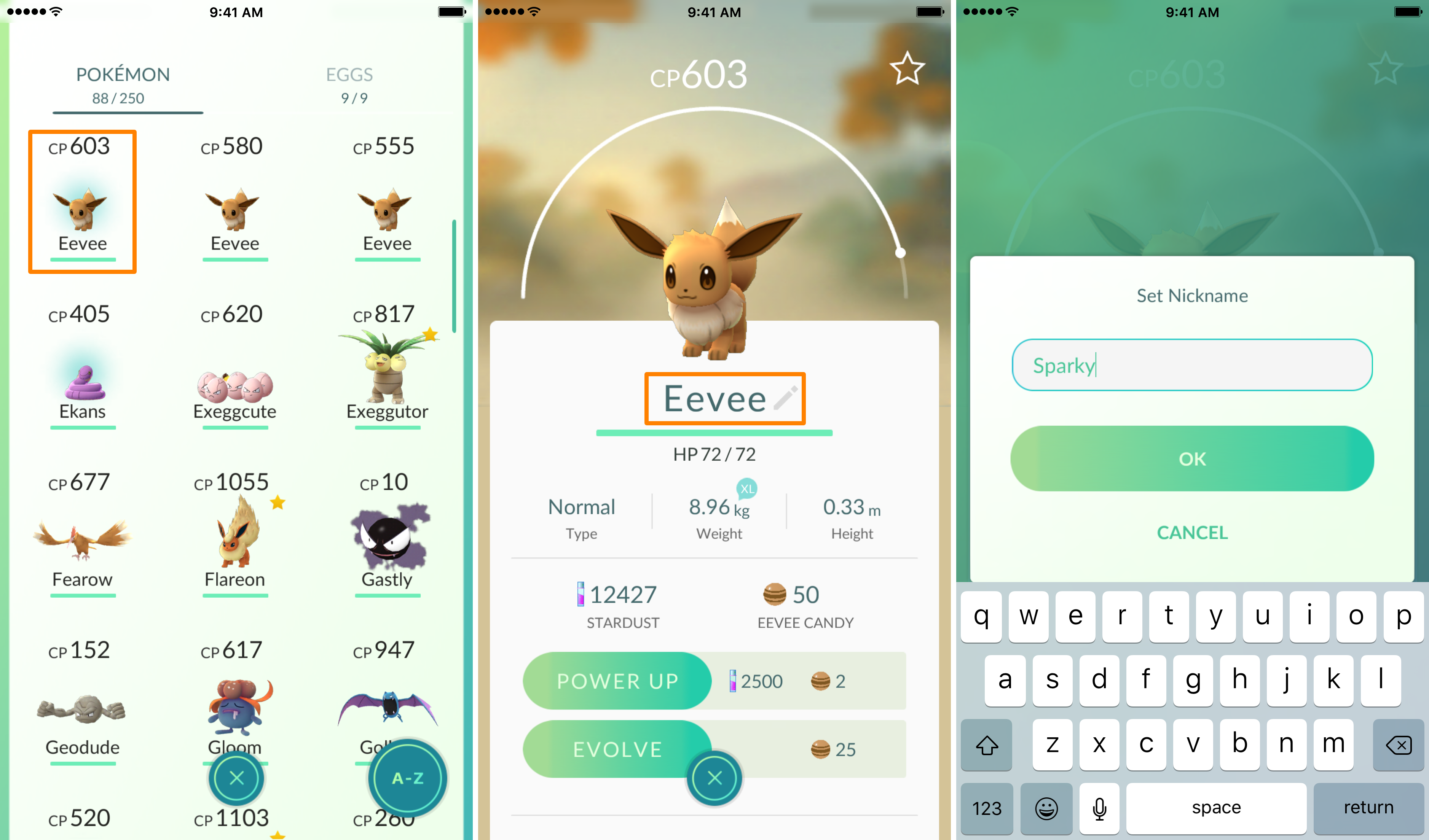 Tap OK when you’ve entered the nickname you want, and the Pokémon will be named what you chose. In this case, Eevee has been re-named Sparky, and when we evolve it, Jolteon is the end result: 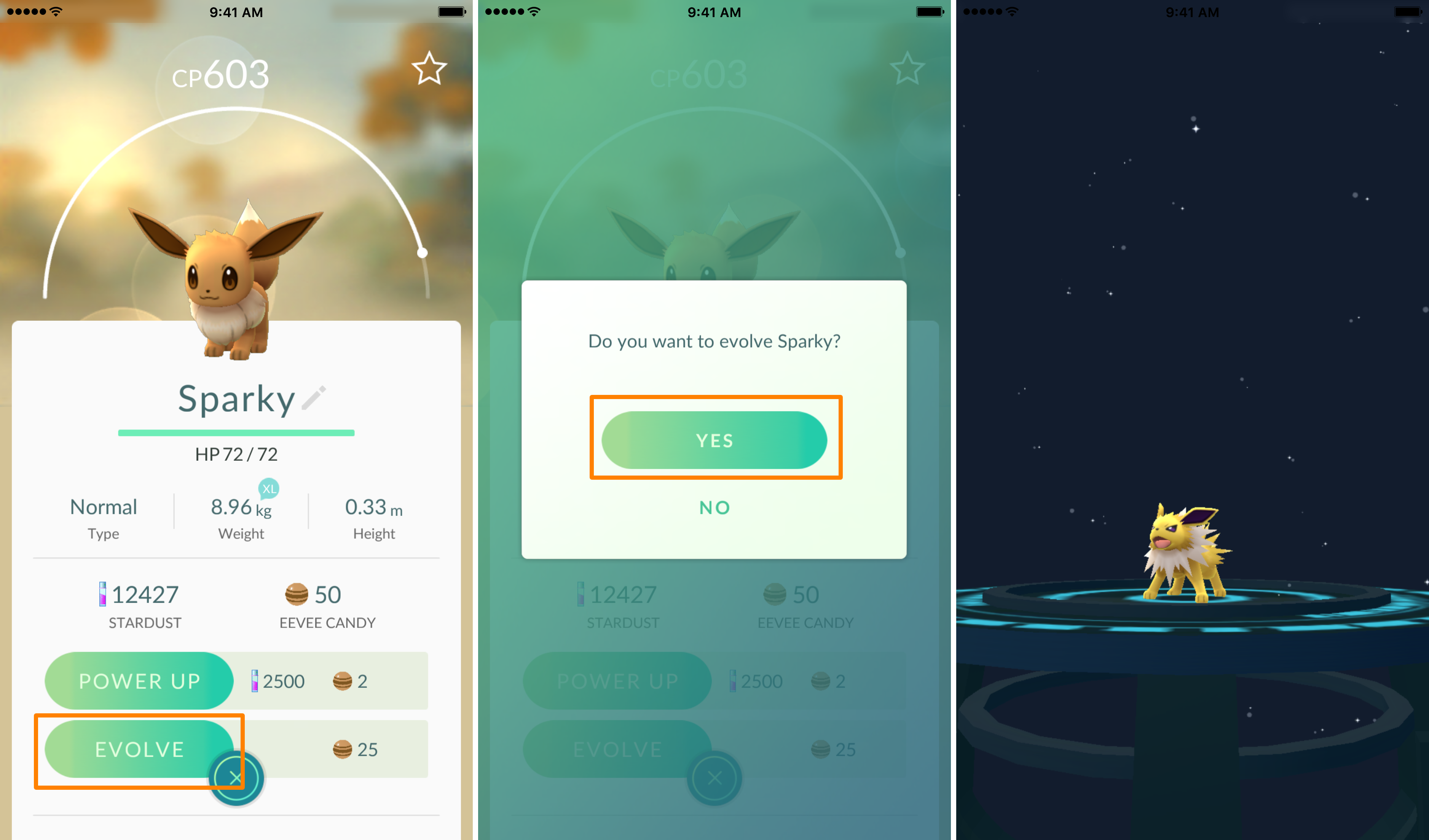 We can also repeat this process with another Eevee, nicknaming it Pyro instead to get the end result of Flareon: 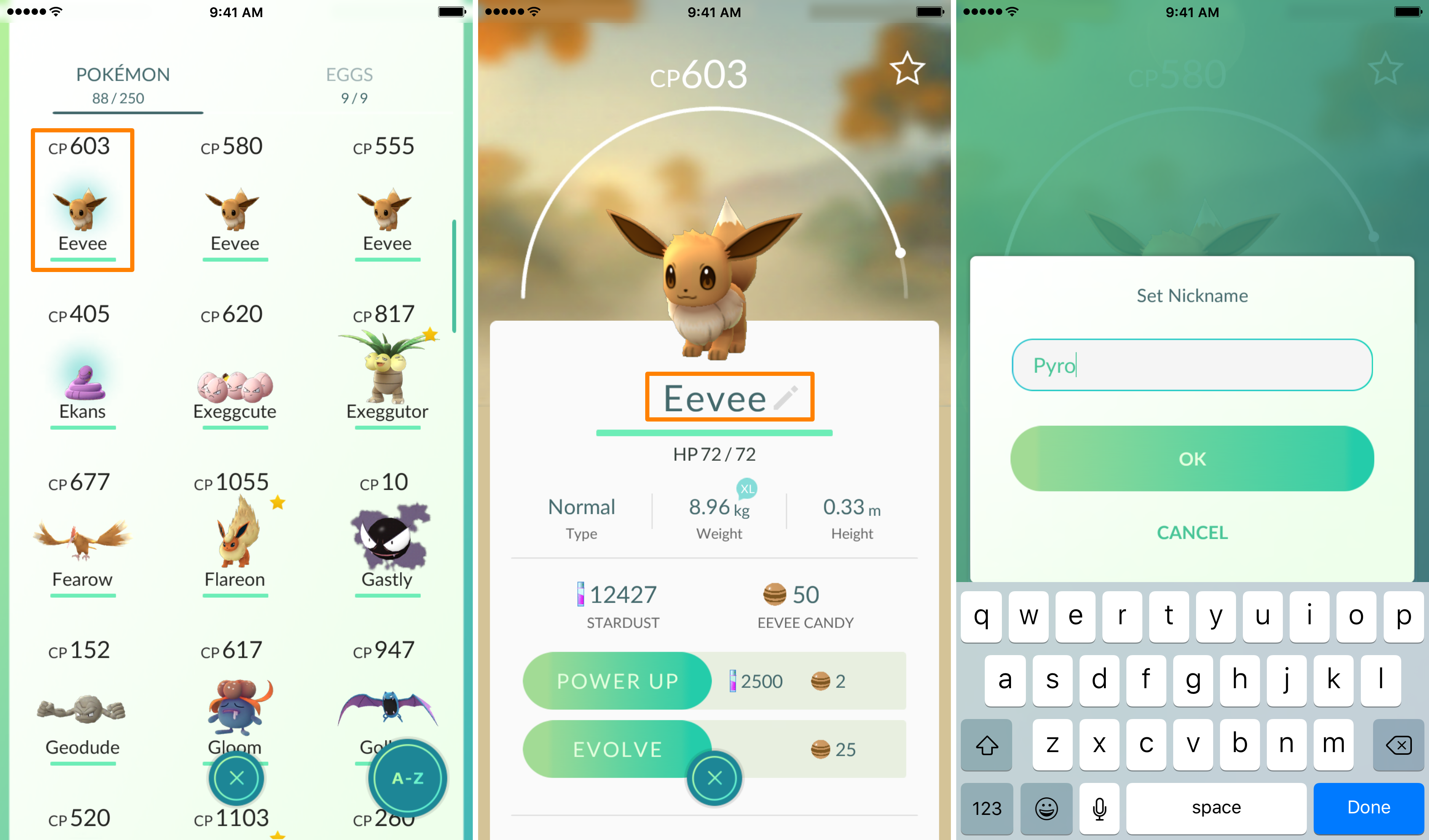 Now that we’ve renamed Eevee Pyro, we’ll attempt the evolution process once again by sacrificing another 25 Eevee candies. And the end result will be, you guessed it, Flareon! 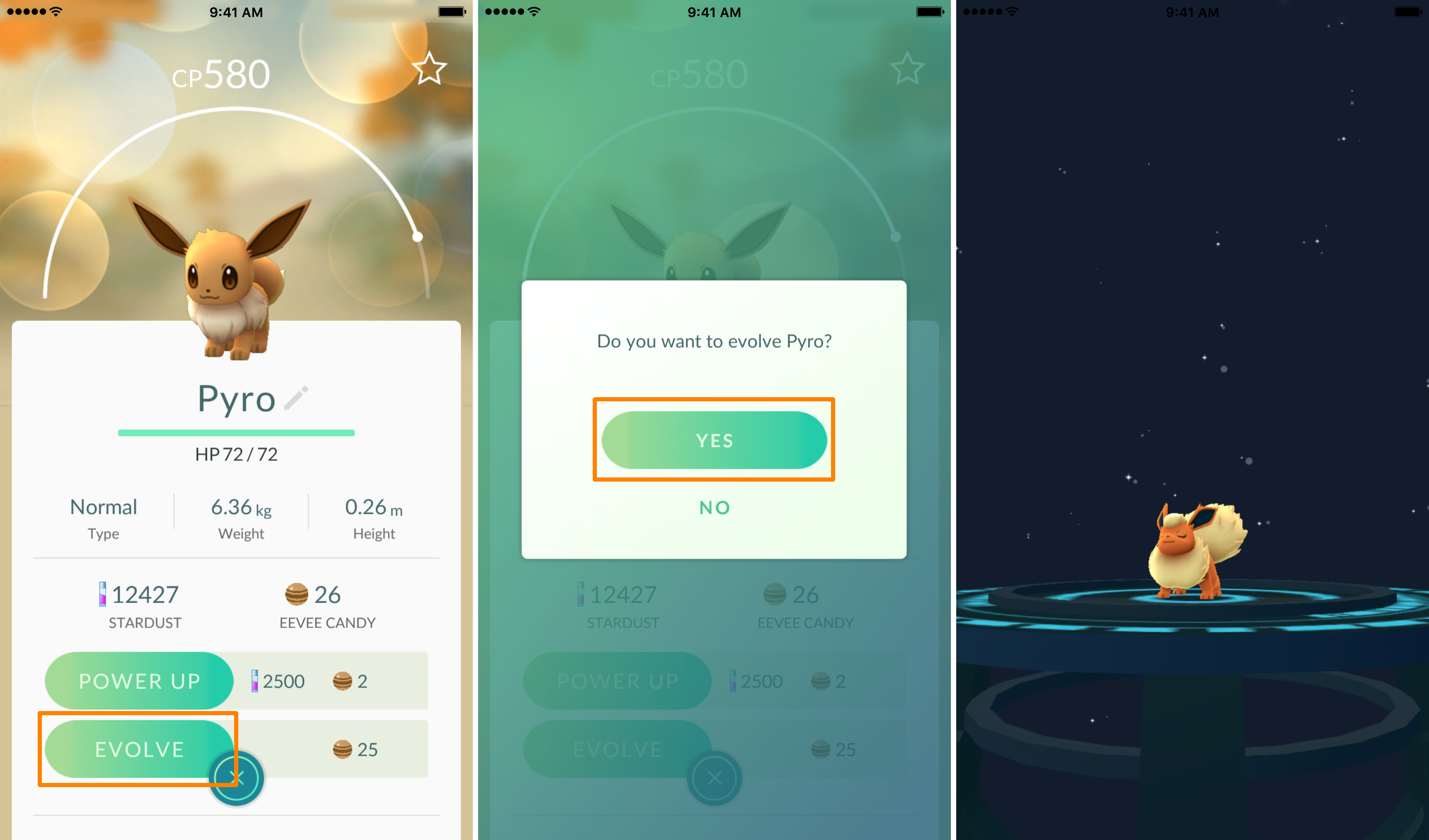 And you can do the same for Vaporeon, if you want the water version, by following the process above, and re-naming Eevee Rainer instead.

What you also need to know

You should always evolve the highest-level Eevee that you have, as this increases the chances of a higher-level evolved form.

You should also know that after the evolution has been completed, you’re free to re-name the evolved Pokémon back into its standard name instead of the nickname you gave it.

Continue to collect wild Eevees, because despite already having all three Eevee evolved forms already, you may always have the chance of leveling up one that’s a higher combat power (CP) level or that has better forms of attacks that may be more beneficial at gyms.

Since the evolution of Eevee has always been random, knowing this little cheat is a great way to make sure that you get the Pokémon that you want, especially if you haven’t been having much luck and always get the one you don’t need.

If you haven’t already started playing Pokémon GO, and want to get started, you can download it for free from the App Store.

Did you know about this little cheat? Share in the comments!