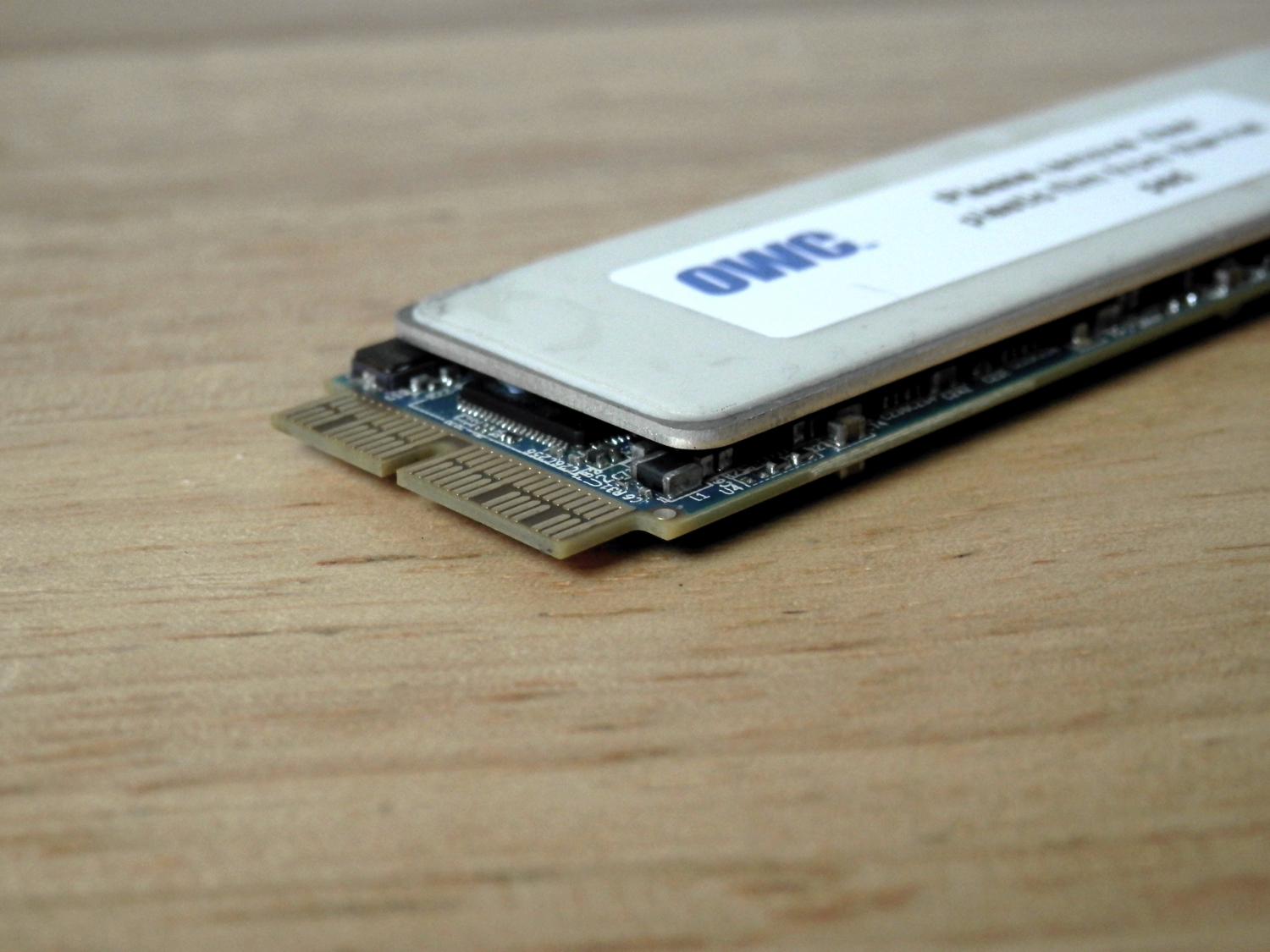 OWC’s Aura Pro SSD storage upgrades start at $399.00 (introductory price) for a 480GB module and and go up in price from there.

Sure to be a popular seller for those that want to upgrade the on-board storage in their expensive Macs without buying an all-new Mac, we’ve decided to try it out and share with you exactly what we think about it.

Upgrading your MacBook Pro/Air SSD… after the fact

Since Apple continues to make things more and more proprietary, there hasn’t been an aftermarket drop-in SSD upgrade for the 2013 and later MacBook Air and MacBook Pro until now. Because of this, if you were getting sick of only having 256GB or 512GB of storage, you would have to buy a whole new computer or use external storage options to gain additional storage space.

OWC’s Aura Pro SSD is a nice option because it’s a direct drop-in that replaces the Apple OEM SSD in your machine. It has a similar form factor, although you’ll notice that the pricing for OWC’s storage is marginally cheaper than buying the upgraded storage directly through Apple.

You can even opt to purchase an install kit through OWC, which includes the tools to perform the work yourself, as well as the Envoy Pro PCI-e to USB 3.0 external SSD enclosure. In this review, we’ll show you the entire kit.

What you get and what you’ll need

First of all, here’s what comes in the box: 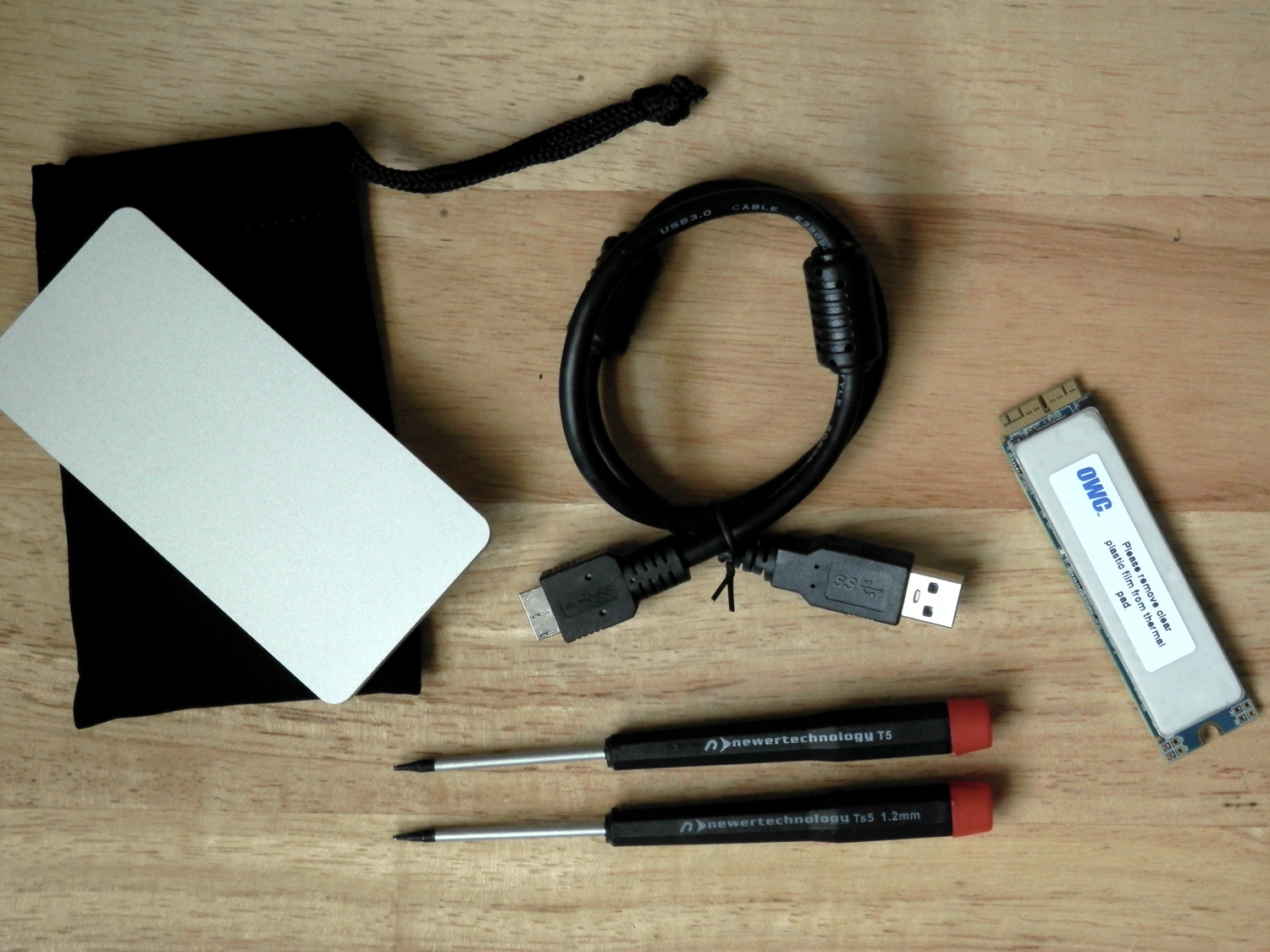 As you can see, you get:

The SSD module pictured above is the 1TB upgrade, not the 480GB upgrade.

Here’s what you’ll need to complete the installation: 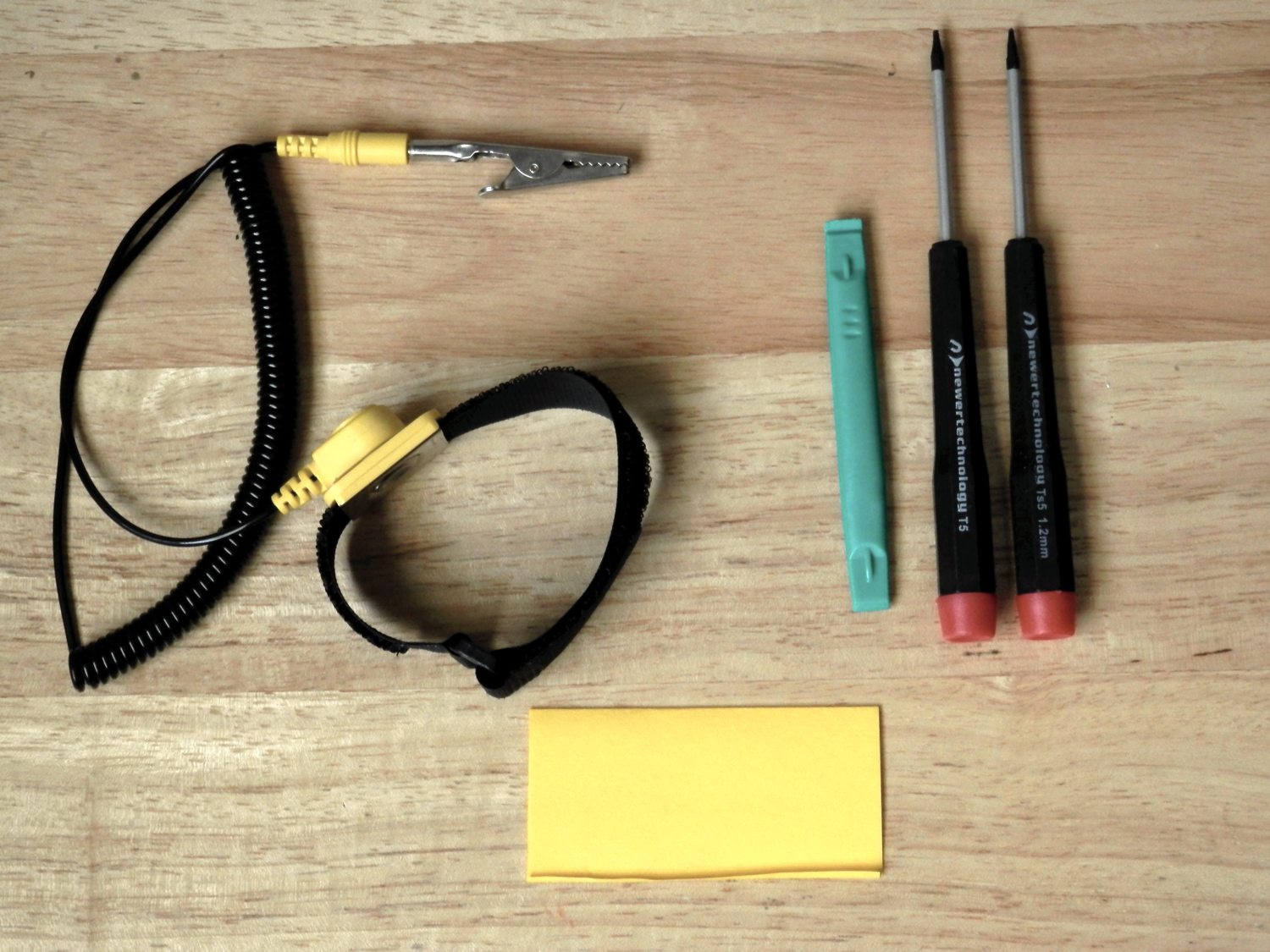 How to install the OWC Aura SSD

You’ll use the pentalobe screwdriver to remove the ten screws from the bottom of the MacBook Air/Pro, and you’ll then want to attach your anti-static wrist strap to your arm and clip it to the aluminum enclosure of the MacBook to prevent any static discharge from ruining your expensive computer. 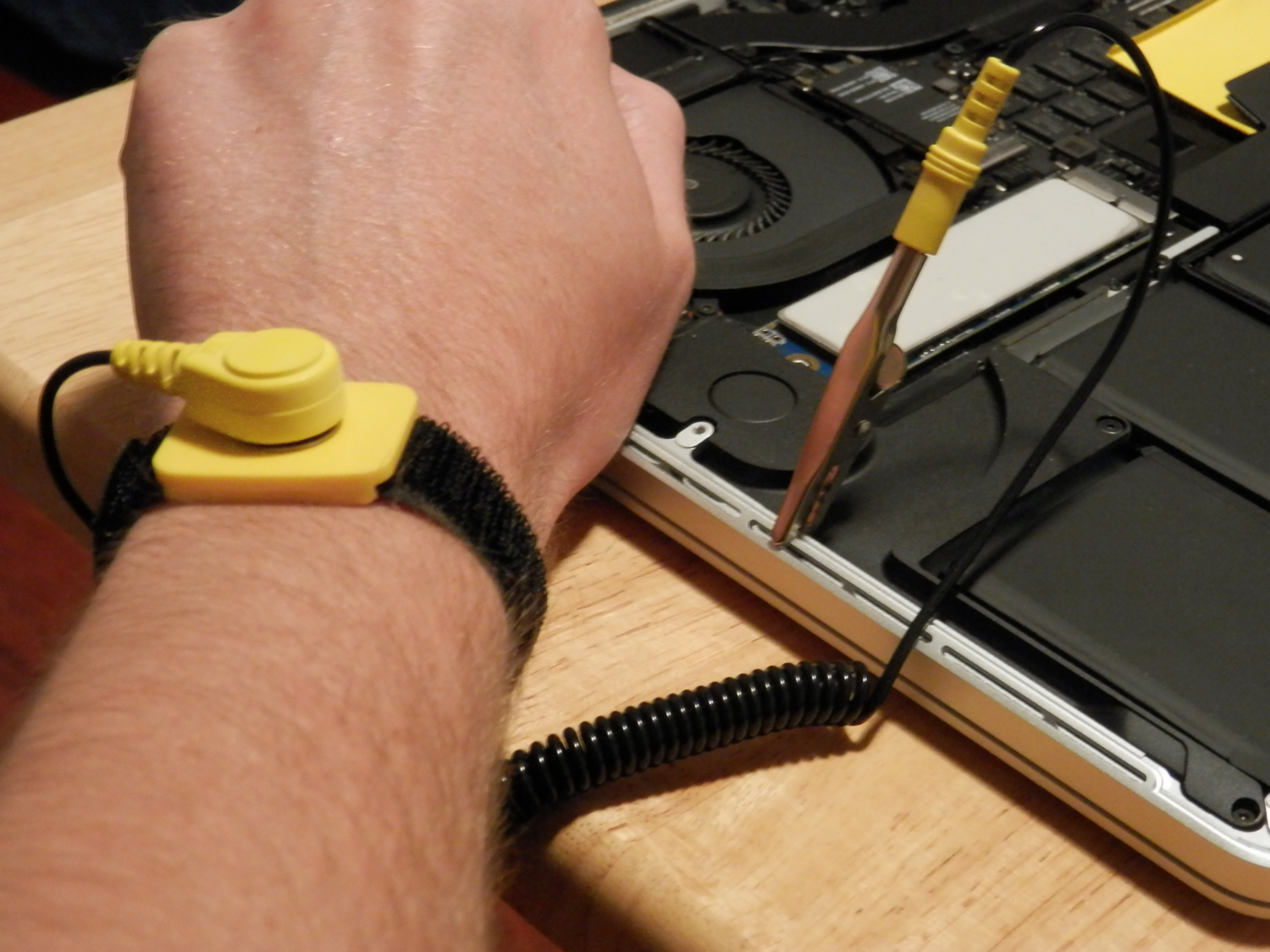 Next, go ahead and disconnect the battery cable from your MacBook with the nylon pry tool to prevent any electricity from causing a short. This is where you’ll use the folded Post-It note for insulation to prevent the metal contacts from touching: 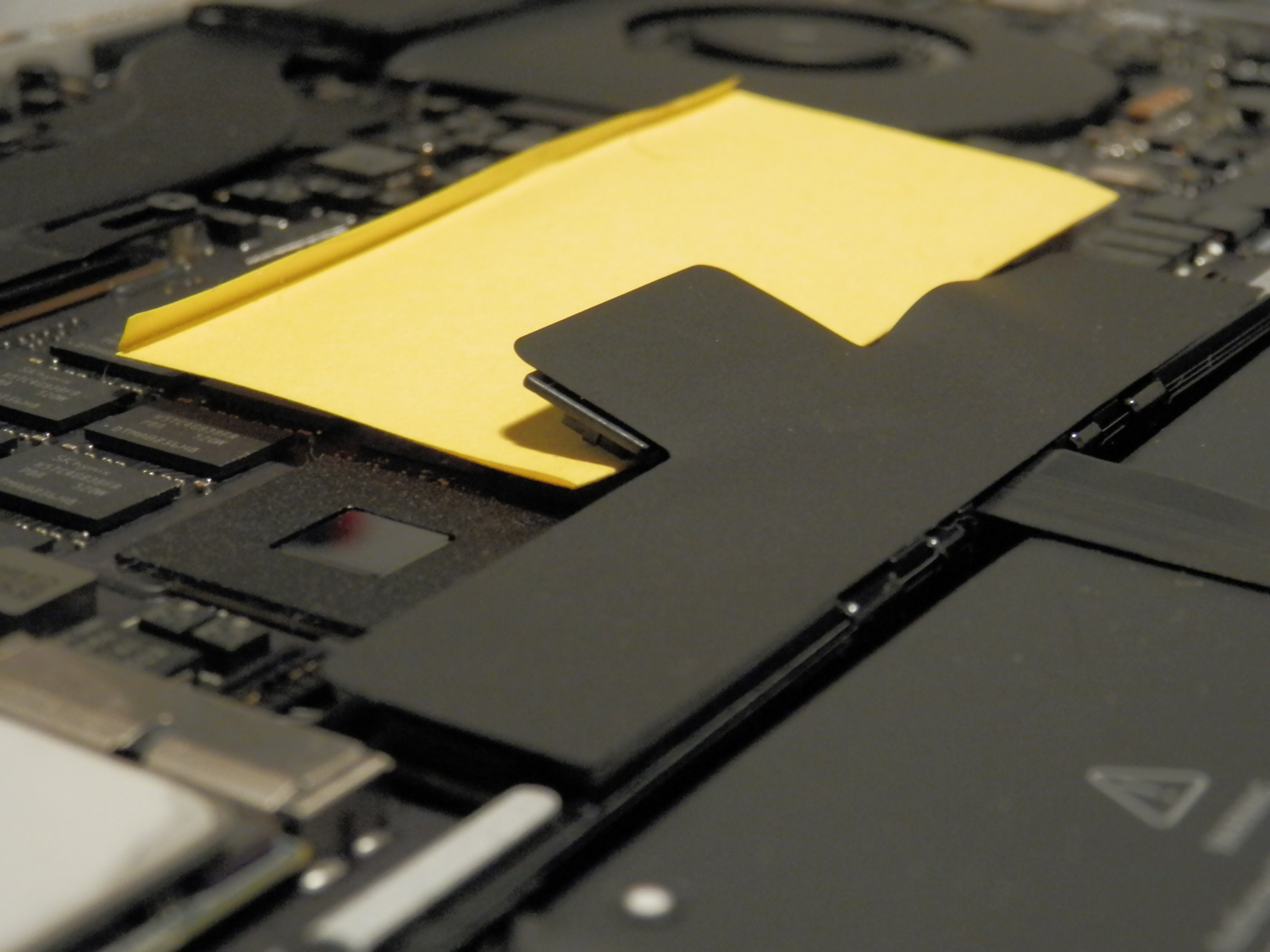 Now, remove the OEM Apple SSD module by removing the torx screw, and then gently wiggling the module out of its socket.

Once you’ve done that, remove the plastic strip from the thermal film at the top of the OWC Aura SSD’s metal heat sink. You can then replace the module with the OWC Aura SSD module and put the screw back in. Make sure to seat the module fully or it won’t be recognized. 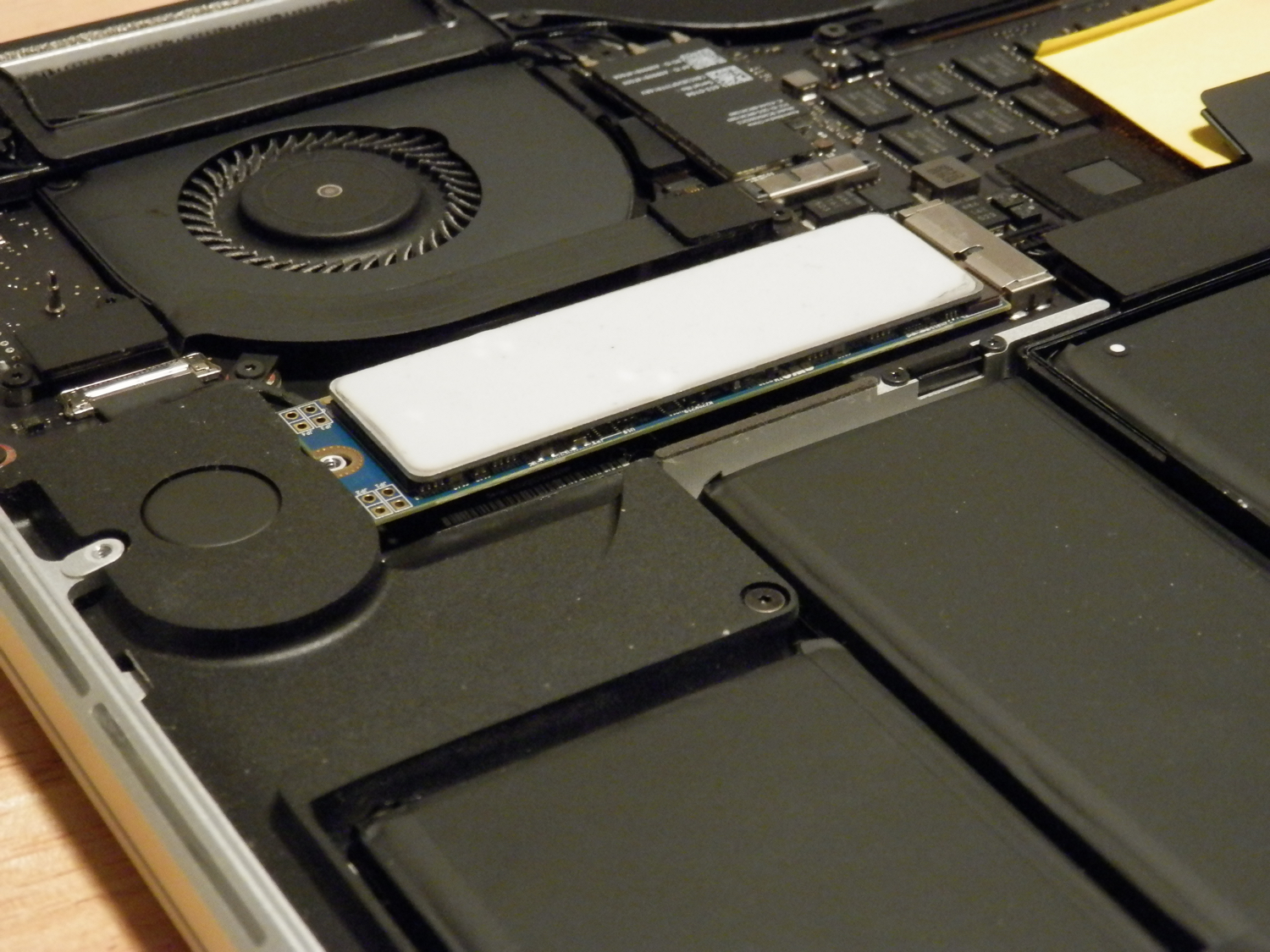 After you’re seated, plug the battery cable back in, un-clip your wrist strap, and start putting the bottom cover on your MacBook again before torquing the pentalobe screws all back down.

What to do with your OEM Apple SSD

The Envoy Pro has a single empty PCI-e slot, and includes a screw so you can tighten down the module just like it was in your computer. 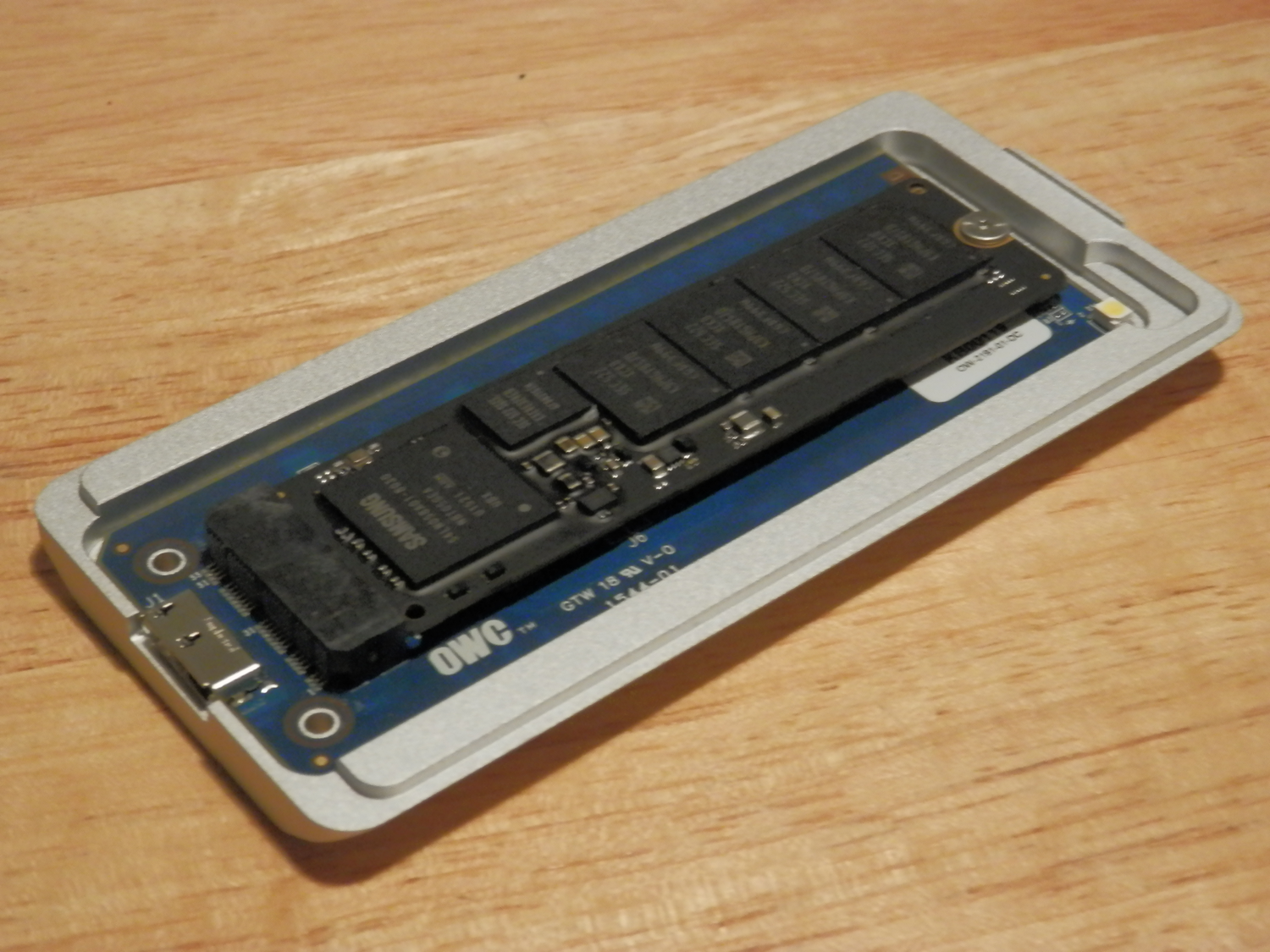 After you’re installed, put the cover on top and screw it shut with the included screws. Then, attach it to your computer: 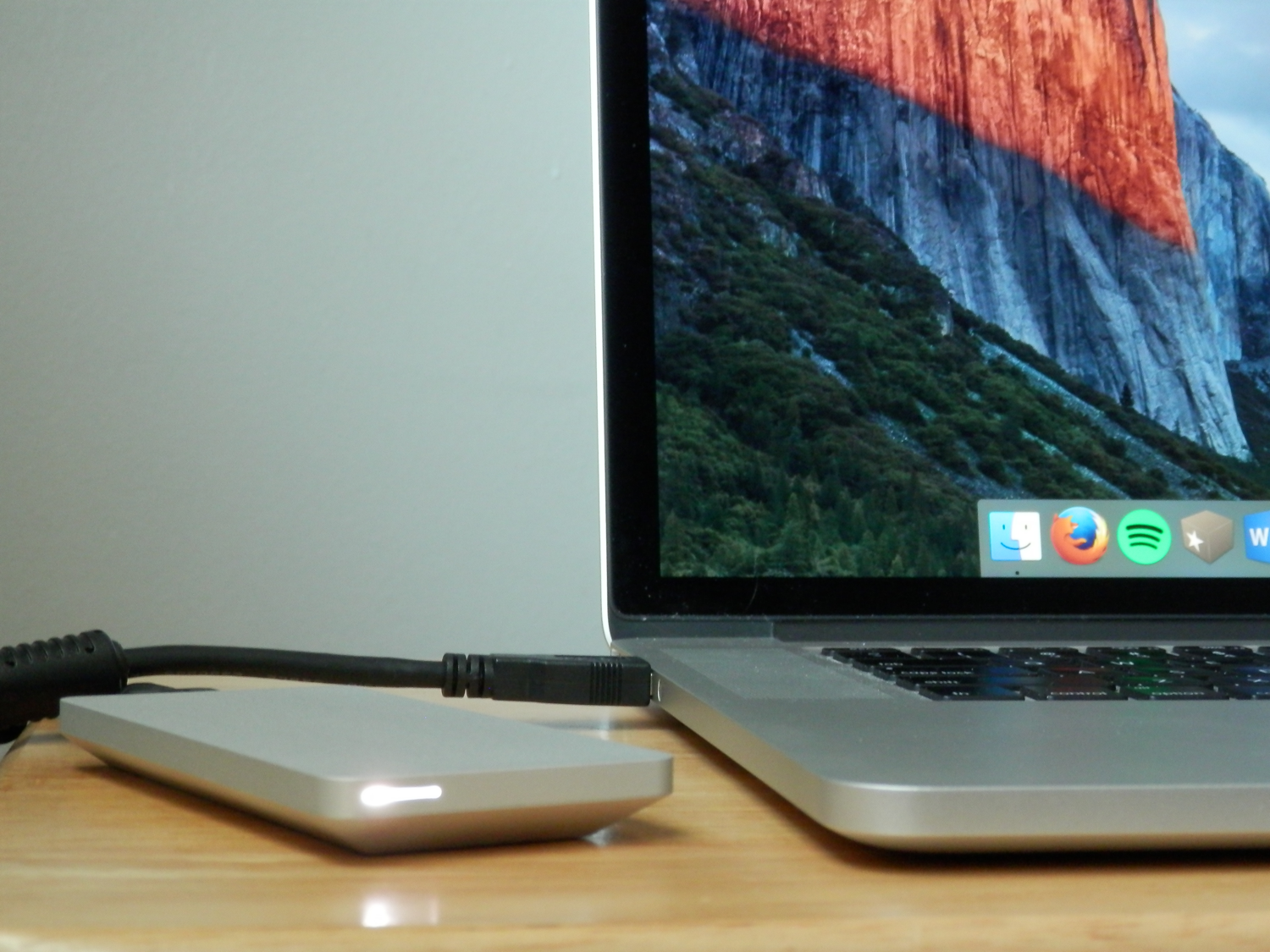 Ta-Da! Now our 512GB MacBook Pro is a 1TB MacBook Pro and we even have a useful external 512GB flash storage drive with USB 3.0 transfer speeds!

This is a major project with lots of risks for errors to occur, and we understand it’s a lot of money to tie up, so here’s the part you’ve been waiting for: the results.

When you go to the About This Mac menu from your Mac’s Menu Bar, you’ll see the new storage drive capacity instead of the old capacity. As you can see, we went from 512GB to 1TB with this upgrade: 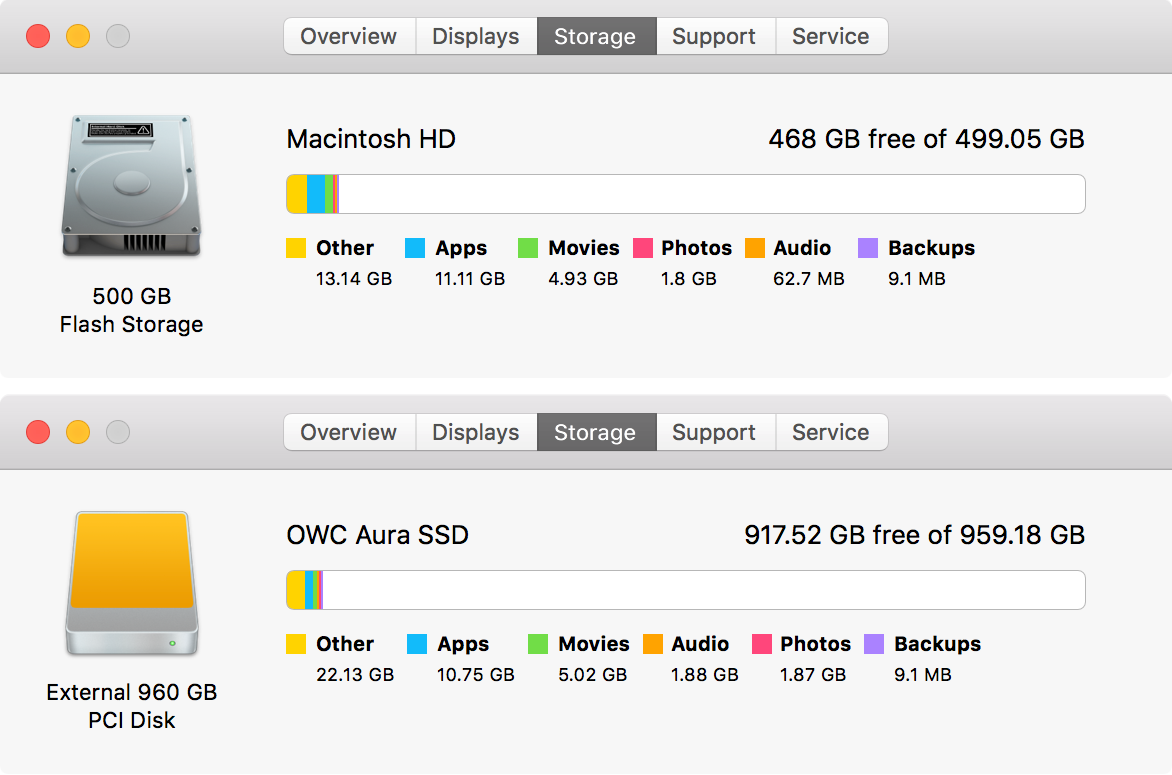 It would seem that the OWC Aura SSD uses a RAID controller structure, and as a result, it’s not going to be recognized as an internal SSD, but rather as an external one by OS X. Not really a big deal, but it does have its limitations.

In terms of speed, we used the Blackmagic Disk Speed Test, which is a pretty standard disk speed tester for OS X available for free from the Mac App Store. 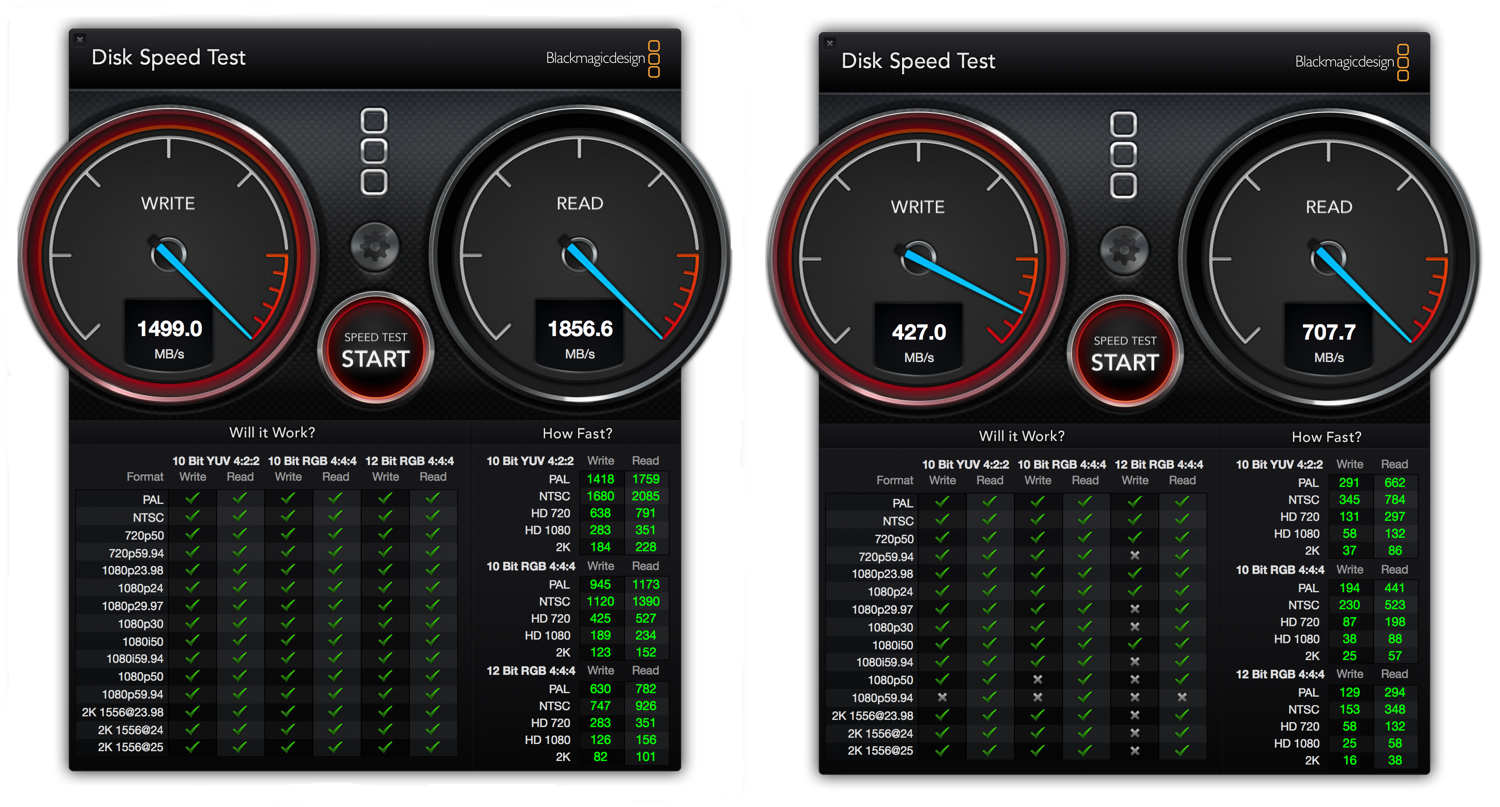 The results on the right are that of the OWC Aura SSD as it was installed in the MacBook. With that drive, we do see a nose dive in performance with write speeds averaging 430 MB/s and read speeds averaging 700 MB/s.

These numbers are still graciously faster than traditional hard disk drives, but those who like the snappy read and write performance of their 4-lane SSD (if they have one) drive are going to be disappointed in the speed losses from the 2-lane SSD. Overall, this becomes a trade-off in speed vs. storage. Which do you need more?

My thoughts on the OWC Aura SSD upgrade kit

Since OWC officially added support for Bootcamp, the upgrade seems to be a lot more feasible for those looking for more internal storage. I’m personally a fan of cheaper alternatives because I like to save money, rather than spend it, so this is a great option.

On the other hand, for those with four-lane SSD performance, the speeds will take a toll with application installation and large file transfers to and from the disk.

Here’s a short Pros and Cons list I’ve put together:

Is the OWC Aura SSD a good upgrade for your MacBook Air or MacBook Pro? Maybe; don’t doubt it just yet. Although it’s slower than some of Apple’s latest zippy SSDs, it’s still ultra fast compared to traditional hard drives and it’s still going to give you flash storage performance. On an everyday basis, you may not even notice the speed drop.

If you are interested in grabbing an OWC Aura SSD and Envoy Pro external SSD install kit for your 2013 or later MacBook Air or MacBook Pro, you can do so from OWC’s website. Here is the pricing information:

What are your thoughts on the OWC Aura SSD upgrade kit? Would you buy one? Don’t be shy – share in the comments below!