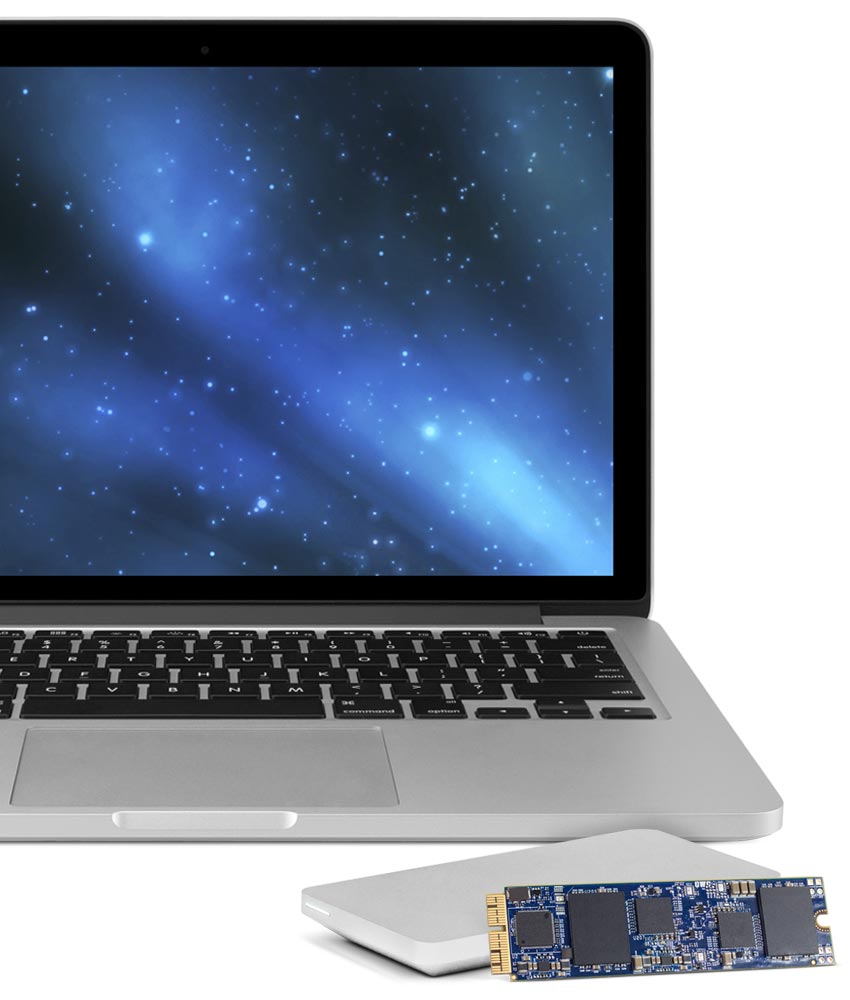 Other World Computing (OWC) has announced on Tuesday a major new step forward in upgrading the flash storage of your 2013 or later MacBook Air or MacBook Pro with Retina display.

Now available are the OWC Aura solid state drives (SSD), which come in flavors of 480GB and 1TB. These storage drive upgrades are direct PCI-e drop-ins for any of the supported computers.

Update: We previously reported that Bootcamp would not work on these drives, and at the time of this writing, that was true. OWC has, however, launched a new driver for its aftermarket SSD upgrades in May that allows Bootcamp to be used on any of the company’s aftermarket drives for Mac computers.

OWC’s new Aura SSD upgrades for 2013 and later Mac notebooks are plug-and-play with no modification to your computer being necessary. They can be inserted right into the PCI-e slot on your Mac’s logic board. You will, of course, need to format the drive for your needs and then install OS X on it for it to be used just like the SSD that’s in your Mac right now.

This the first internal SSD upgrade ever to be made widely available for these models of Mac notebooks, and now multiplying your Mac’s storage by up to 8 times has never been easier. Because this is an internal upgrade, you won’t have to carry around an external drive with you just to have more storage, and you’ll get all of the speed advantages of a PCI-e connection.

No special software will be needed to use these drives either. They’re carefully engineered to work with your Mac, so no TRIM-enabling software will be necessary. If any issues should occur while using the drives, they are covered under OWC’s three-year warranty.

More features of the Aura SSD include:

•  Tier-1 Flash – Aura SSDs use only top-rated flash for amazing performance and dependability.

•  Cell-Level Data Refresh – Aura’s powerful embedded processor monitors and re-writes data blocks as needed to maintain correct charge at the cell level, improving the integrity of your data and extending the life of your drive.

•  Global Wear-Leveling – A global wear-leveling algorithm helps evenly distribute data across your SSD cells, extending the life of your drive by preventing any section of flash from getting worn out prematurely.

All of OWC’s upgrade kits include all the tools you’ll need to upgrade your storage, so there’s never any hassle if you’re a do-it-yourself-er and would like to tackle an upgrade project on your own. Of course, when you’re tampering with your Mac’s internals, we can’t stress enough how important it is to use an anti-static wrist strap to prevent unwanted static discharge from damaging your Mac’s logic board and other components. Doing so will also void your Apple warranty, so this is something to keep in mind.

When you remove your factory solid state drive from your Mac, you can then re-purpose it as an external solid state drive using one of OWC’s external SSD cases that support 355MB/s transfer speed, so no storage is ever wasted, but you’ll always know you’re making the most of your internal storage.

Unfortunately, this storage upgrade will not work in the new MacBook with Retina Display. It will only work with 2013 and later MacBook Airs and MacBook Pros with Retina display.

The OWC upgrade kits are available with and without installation tools. Those that opt for the upgrade kits will also get the Envoy Pro external enclosure for housing your factory Mac SSD as an external drive.

Although they’re a little pricey at a first glance, the upgrades are significantly cheaper than upgrades from Apple. A 1TB drive upgrade through Apple is $800, and that doesn’t include any tools or an external drive case. OWC’s price for just the 1TB drive is $650, but for $720, you’ll also get all the tools you need, as well as the external drive case, which is still less expensive than Apple’s $800 price tag.

Orders placed through OWC for these Aura SSD upgrades will start shipping in March.

Will you be upgrading the storage of your Mac notebook with an OWC upgrade? Share in the comments!