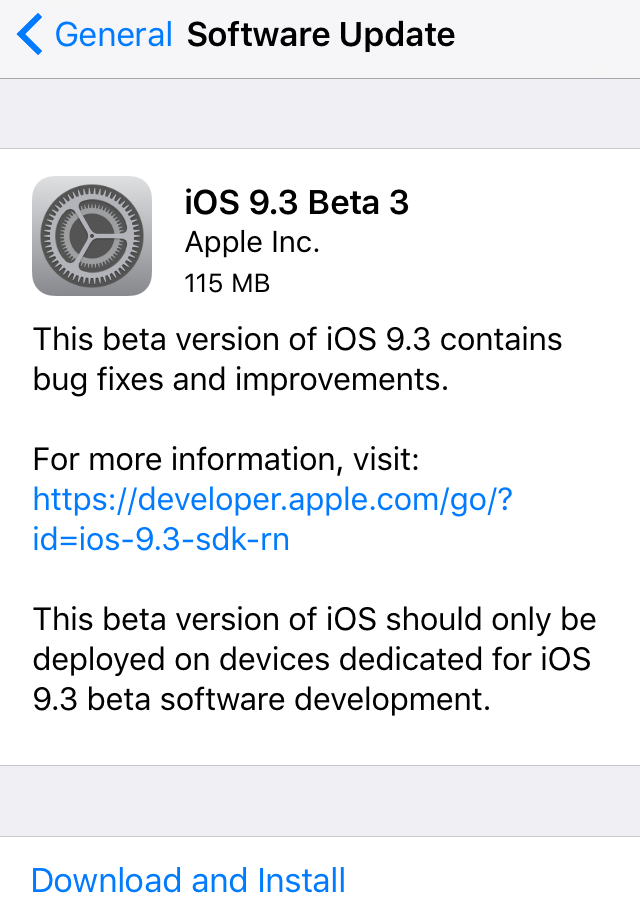 Apple on Monday seeded a third beta of iOS 9.3 to its developers. The software is available to members of the Apple Developer Program and can be deployed on the iPhone, iPod touch and iPad devices running a prior beta as an over-the-air download in Settings → General → Software Update.

A standalone installer should be available shortly through Apple’s portal for developers.

The new beta has a build number of 13E5200d and adds a new Wi-Fi Calling option for Verizon customers. iOS 9.3 beta 3 arrived approximately two weeks following iOS 9.3 beta 2 and a full month since the original 9.3 beta was seeded to developers. We will update the article with a running list of enhancements in the new beta as we encounter them.

According to the official changelog does not mention any new features in the third beta of iOS 9.3, However, Twitter users are reporting that today’s beta enables Wi-Fi Calling capability on the Verizon network while providing a carrier update for T-Mobile users to solve an issue which prevented apps from loading over a cellular connection.

For the full overview of every new feature in iOS 9.3, check out Jeff’s preview of iOS 9.3 or head over to Apple’s website.

As for the prior beta, iOS 9.3 beta 2, that build has introduced additional tweaks to Night Shift mode for blue light reduction in Settings while adding a brand new Night Shift toggle to Control Center.

In addition, iOS 9.3 beta 2 has removed the useless Set Wallpaper option from the 3D Touch shortcut menu for the Settings app, introduced a new Add Playlist Songs to My Music switch in Settings → Music, added new 3D Touch shortcuts for the stock Tips app and refreshed the companion Watch app so that it shows your current watch face.

Other features and enhancements that will be enabled by iOS 9.3 include more personalized Apple News recommendations (along with faster performance, inline video and a landscape view on the iPhone), password or Touch ID protection for your notes in the Notes app, an all-new Activity section in the Health app, New/For You sections and a Nearby feature in CarPlay’s Music app and other refinements.

If you spot new features in iOS 9.3 beta 3, leave a comment below.