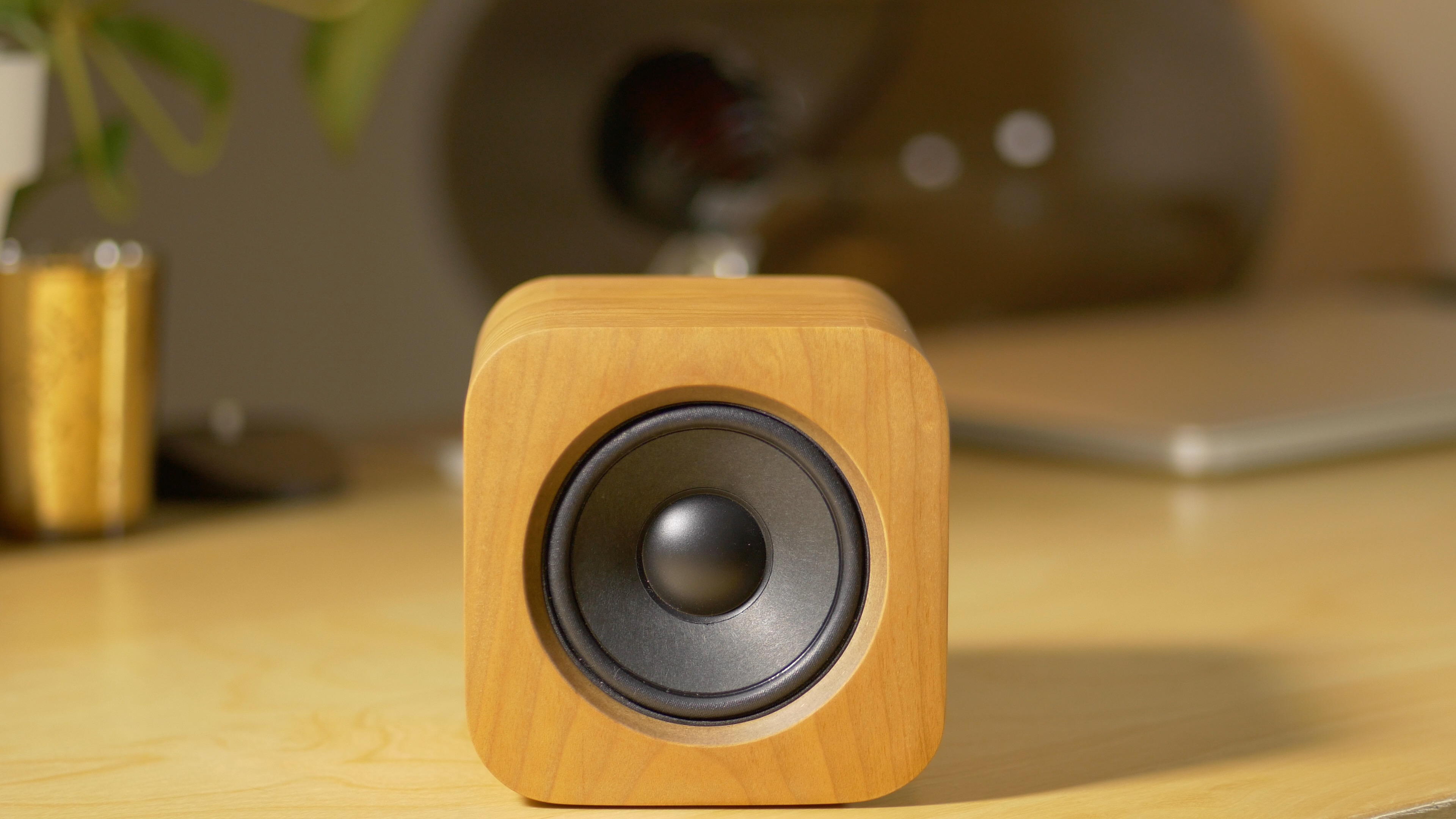 The Sugr Cube ($229 on Amazon) is a portable wireless speaker with built in gesture controls. It features great design, with a stunning minimalistic wood exterior and a large power/volume knob on its rear. The Sugr Cube isn’t inundated with fiddly controls and buttons; in fact, the volume knob is the only moving part on the entire speaker.

The name of the device fits it well. Really, what’s more simple and sweet than a cube of sugar? This little device might be small and it might look unassuming, but there’s some interesting technology lurking beneath the surface, and some sweet sound ready to emanate from the tiny speaker housed inside of the wooden cube. 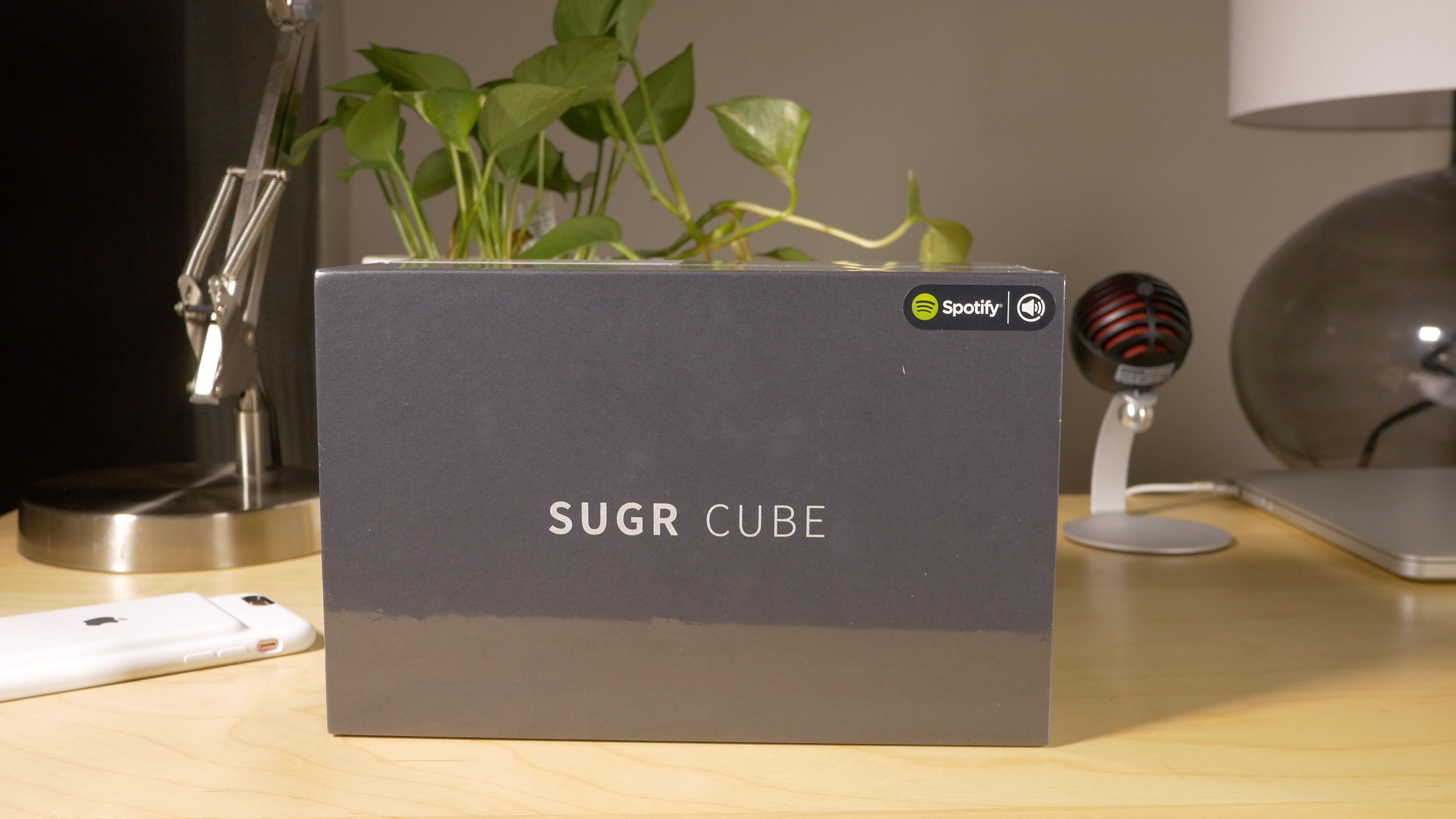 The Sugr Cube is a small speaker that’s not too much larger than one of those square tea tins that you can buy from Trader Joe’s. The speaker isn’t very heavy, but it doesn’t feel cheap, either.

The wood surface is sanded and feels smooth to the touch. The bottom of the speaker features a non-slip rubber pad that contains all of the necessary FCC insignia, model type, etc.

On the back of the Sugr Cube, you’ll find the single power-on/volume knob, along with a port to allow for air movement. The rear of the device also contains the Cube’s single input option—a USB micro input for charging the speaker. Sugr states that a full charge will last 24 hours, and nothing I experienced in my hands-on time with the speaker lead me to doubt those claims. 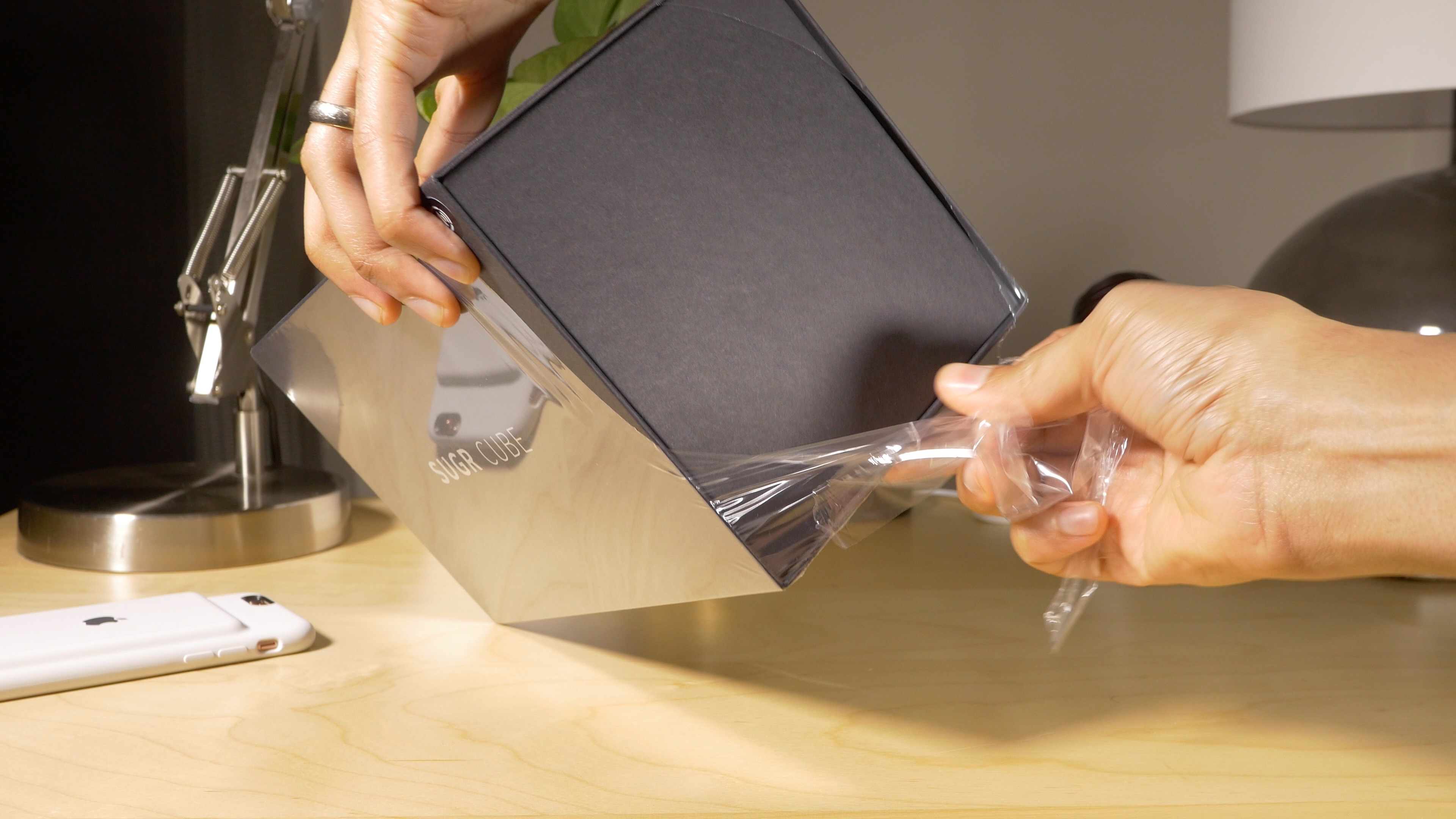 Overall, I’d say that the hardware feels high quality. It’s well made, and it looks good enough to proudly display in your office or other small living space. The 4 Watt speaker isn’t powerful enough to fill a large room, but it has no problem filling a small to medium-sized room. You shouldn’t expect a lot of low end frequency, but that’s pretty much a given for a speaker of this size.

The Sugr Cube has the ability to link up with an additional Cube for stereo output. Unfortunately, I was unable to test this, but I’d imagine that that would significantly enhance the sound quality for stereo music tracks. 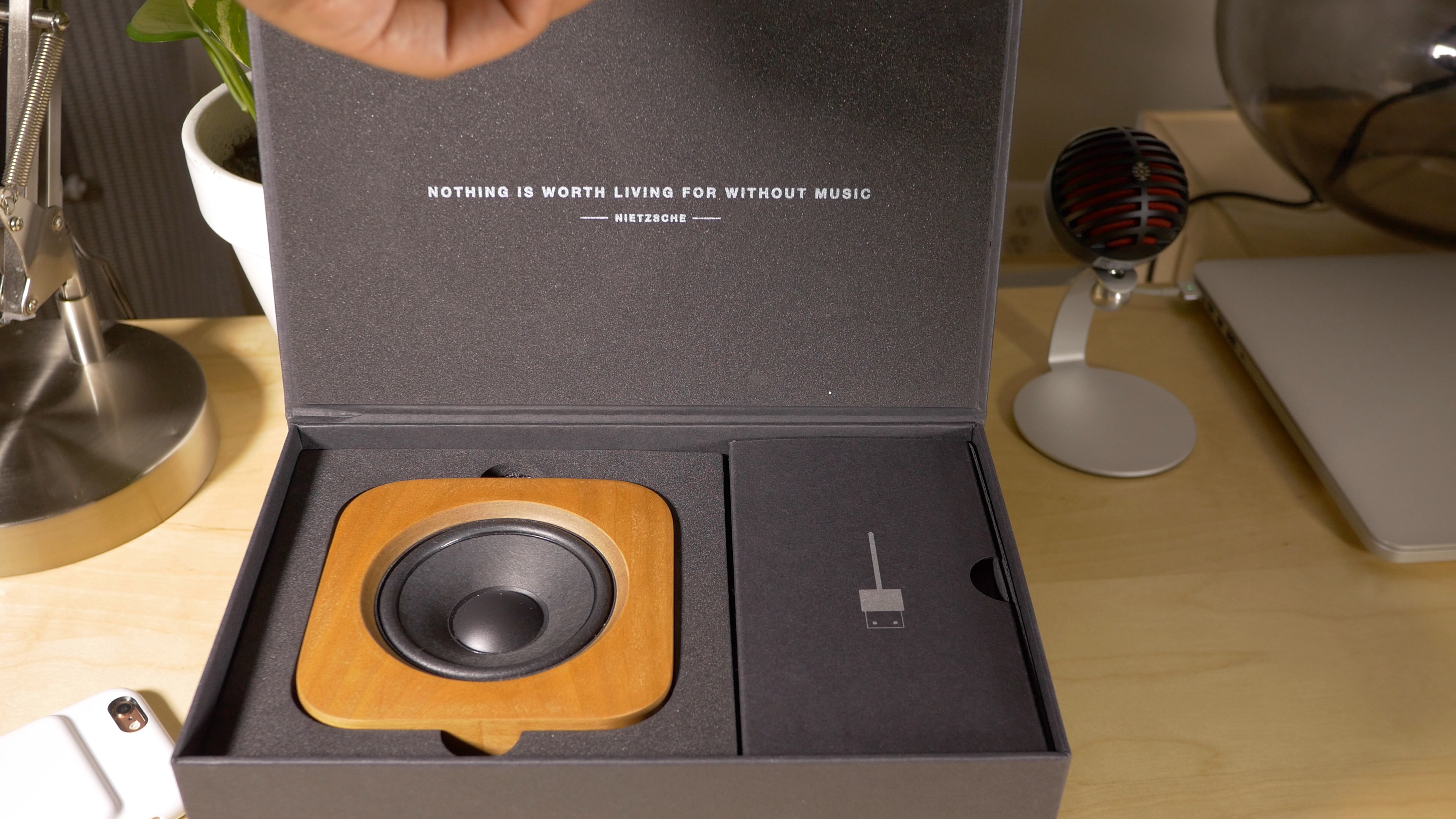 The most innovative thing about the Sugr Cube is the inclusion of gestures. By tapping the top of the speaker, you can pause and play music. A simple tilt to the left or right will go to a previous track and skip a track respectively.

It’s fun to be able to physically interact with the speaker this way, but it also means that you’ll need to keep it within arm’s reach to take advantage of the gestures. The amount of gestures is limited, but Sugr states that more gestures are on the way via firmware updates.

Firmware updates, and overall setup is accomplished via the Sugr app. The app, while feature-rich, is a mixed bag. First and foremost, it’s not updated for the larger screen of the iPhone 6s. In what is almost 2016, that’s inexcusable at this point. 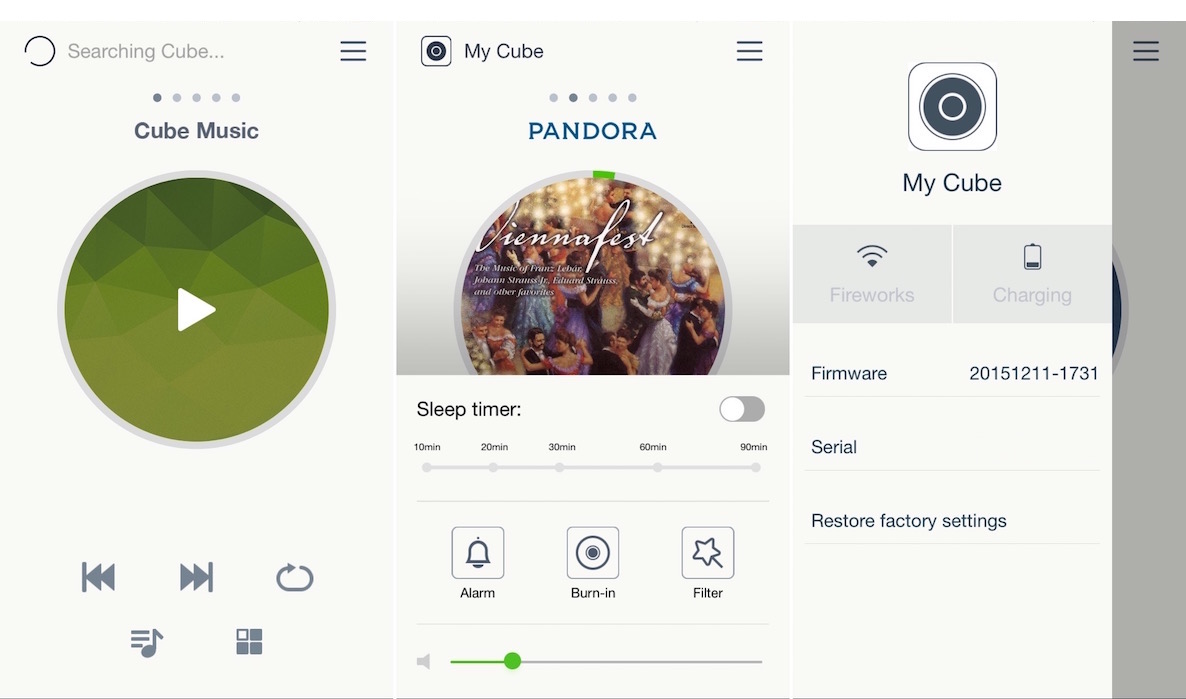 The Sugr app is responsible for configuring the Sugr Cube to your liking. Initial connectivity is simple and straightforward; it’s just a matter of charging the device, launching the app, entering your Wi-Fi password, and using an audible chirp signal that emits from your phone to allow the Sugr Cube to connect to your Wi-Fi network.

Once connected, the Sugr app is the source of all sorts of goodies. The Sugr Cube contains the following features that you can immediately take advantage of upon setup:

Most notably, the Sugr Cube also works with Spotify Connect, which allows Spotify Premium members to stream music directly to the speaker. In fact, all of the built in music options allow for direct streaming or playback of music, which means that your phone is freed up to do other things, like take phone calls, without interrupting music playback.

To me, this is the most compelling feature of the Sugr Cube. Having Spotify Connect access means that the speaker itself is talking to your Wi-Fi network and streaming Spotify directly. This allows you to shut off your phone, or go out of range of the speaker while keeping the music going.

What about those times when you wish to play back Apple Music songs, or other audio content from unsupported apps? In cases such as these, you can just use AirPlay, which the Sugr Cube happily supports.

Keep in mind that the Sugr Cube is a Wi-Fi speaker, not a Bluetooth speaker. Thus, you will need Wi-Fi connectivity to play back audio from a streaming source. This greatly limits the device’s portability, since there is no direct Bluetooth connection to be had while out and about. 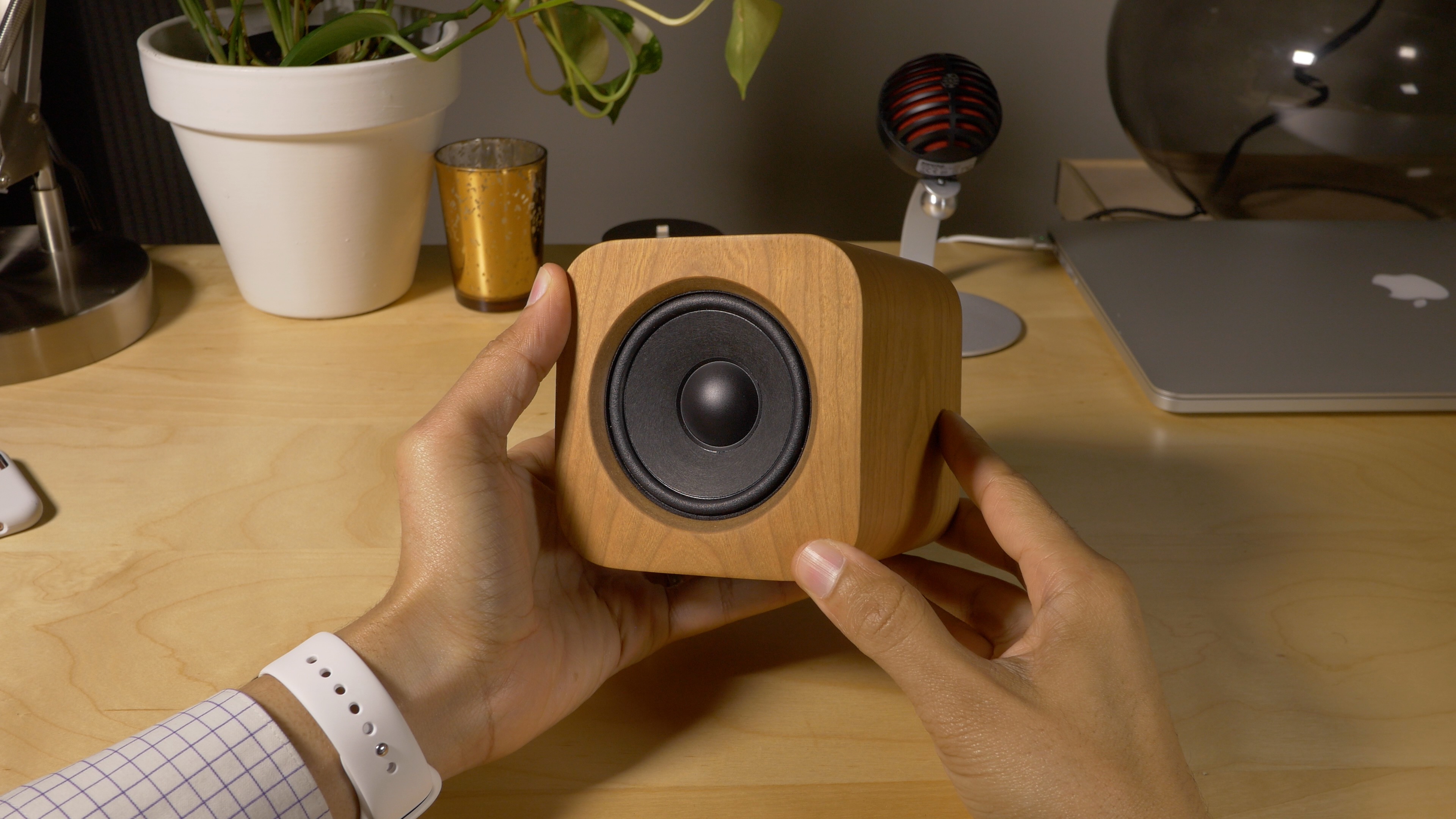 Speaking of outdoors, the build quality of the speaker isn’t very appropriate for outdoor settings anyway. I personally wouldn’t feel comfortable getting the Sugr Cube wet from water or even damp from humidity. It doesn’t feel fragile, but wood and water traditionally don’t mix well. The Sugr Cube is portable with regard to moving it around your abode, but you should probably keep it indoors.

While connectivity was generally satisfactory during my hands-on time with the Cube, I did notice a few connection drops and stutters from time to time. These interruptions occurred while I was right next to my AirPort Extreme, so I’m not sure what to blame the problem on. I did receive a firmware update, which was easily applicable via the Sugr app, and that seemed to help alleviate some of the drops in playback that I experienced, but not all. 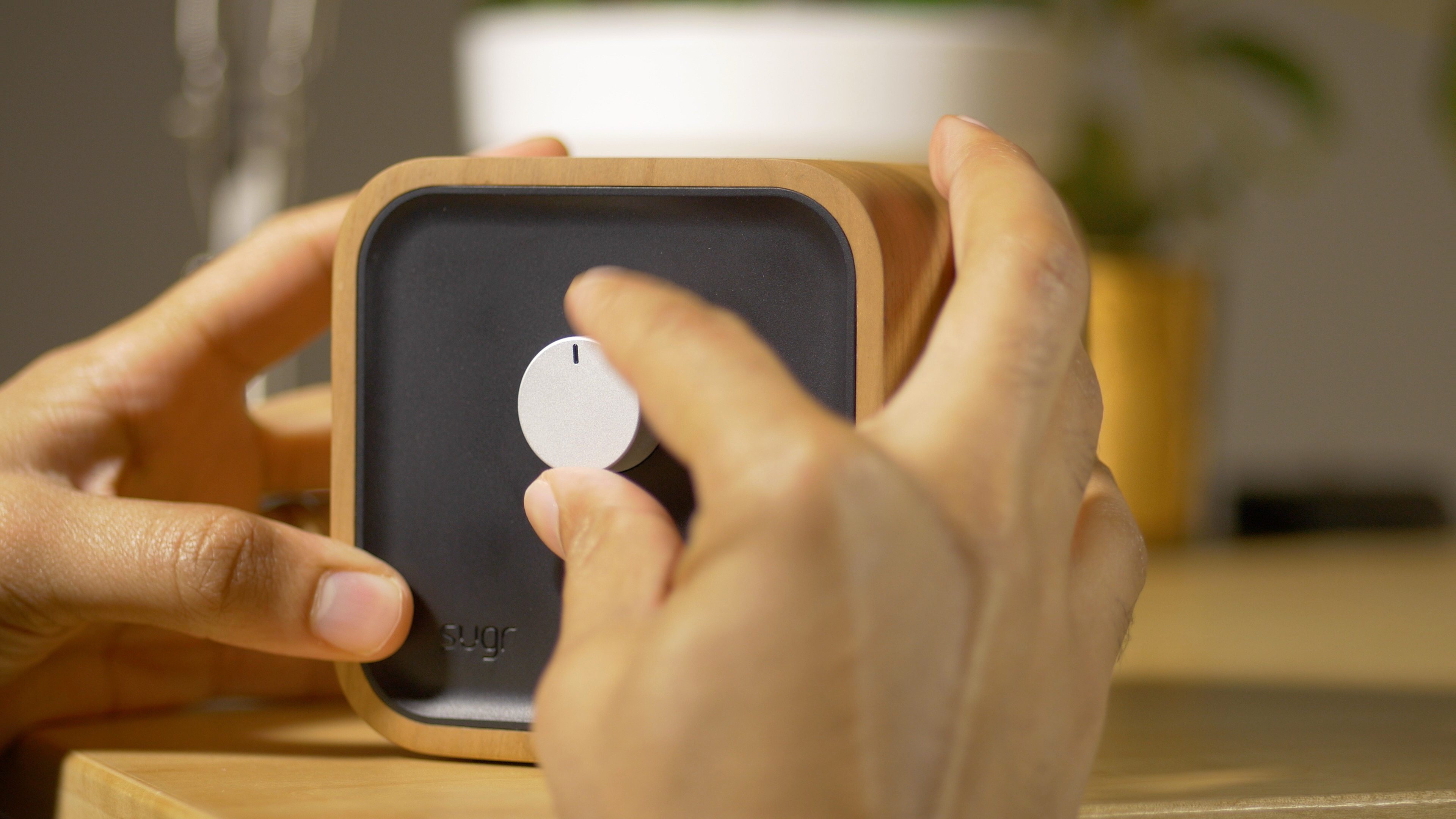 Keep in mind that the DRM featured on Apple Music tracks prevents you from storing them on the Cube’s built-in storage. Since the Sugr Cube isn’t integrated with Apple Music like Sonos now is, you will only be able to stream Apple Music tracks via AirPlay, and not directly from Apple’s servers.

The Sugr Cube isn’t cheap at $229, but it features the build quality and looks of a premium speaker. You’re not going to get audiophile-level sound quality from a speaker this small, but it does sound decent enough, certainly better than your average $100 Bluetooth speaker. 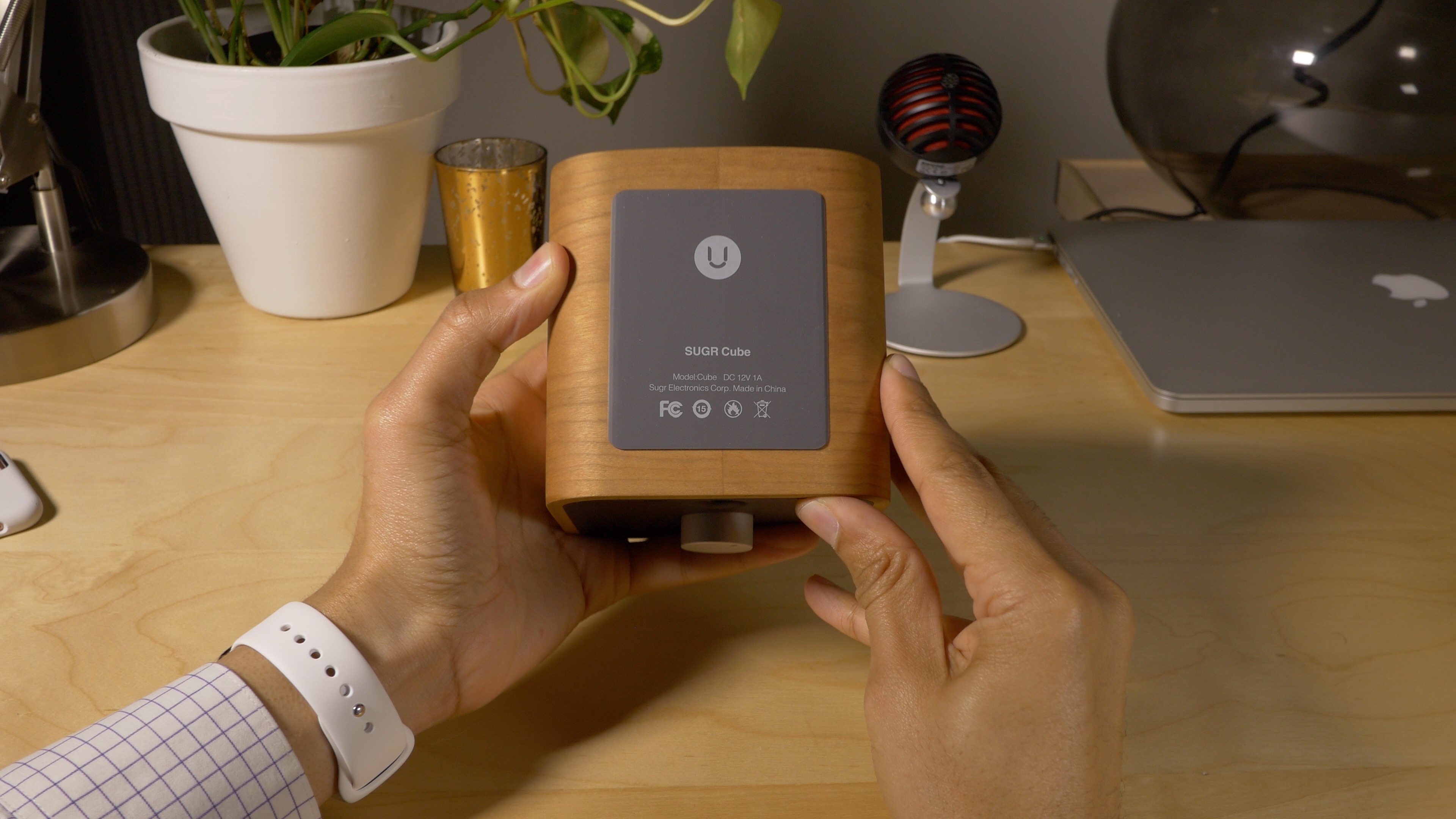 Even though the Sugr Cube lacks Bluetooth playback, it’s still relatively flexible with its Spotify Connect capability, on-storage playback, and other built-in options like Pandora and BBC Radio. Of course, AirPlay support is built in, so you’re free to play any type of music or sound that can be played back via AirPlay.

Apple Music aficionados may want to think twice about the Sugr Cube, because, as stated, it lacks support for direct Apple Music playback. You can play back Apple Music tracks over AirPlay, but there’s no direct stream capability, so it requires a connected iOS device via AirPlay. 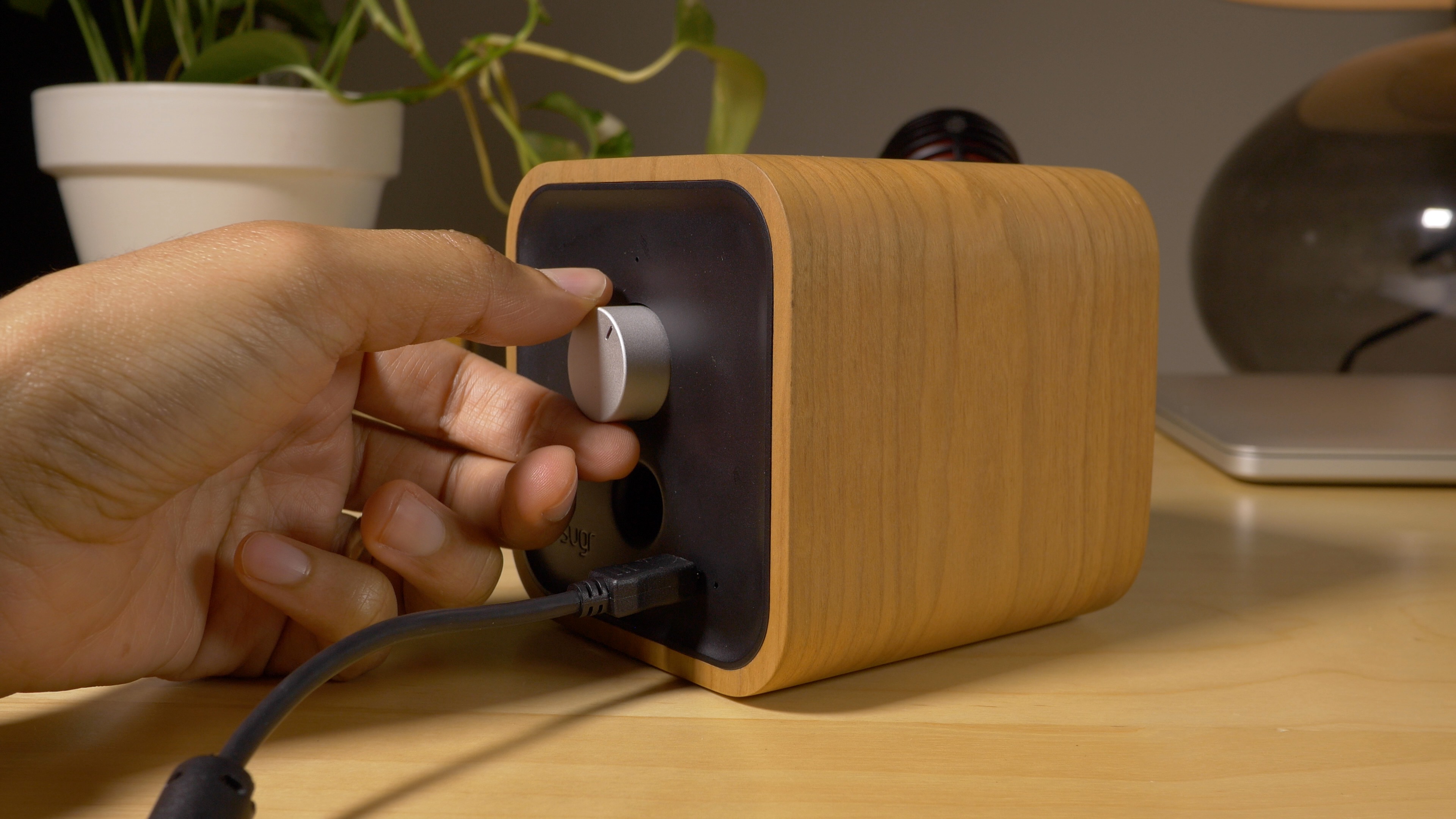 The Sugr Cube is certainly one of the best-looking and overall flexible portable Wi-Fi speakers that I’ve seen. Having a pair of them would be ideal for stereo playback. However, such a setup will start venturing into Sonos PLAY:5 pricing territory, and that speaker truly does provide a superior listening experience, not to mention Apple Music support.

The best thing that the Sugr Cube has going for it are its looks and build quality. The gestures, while nice, shouldn’t be the determining factor as to whether or not you purchase this speaker. The Sugr Cube is fairly flexible as a music player, but it does have several shortcomings. If you’re looking for a gorgeous speaker and can live with these shortcomings, then the Sugr Cube is worth your consideration.