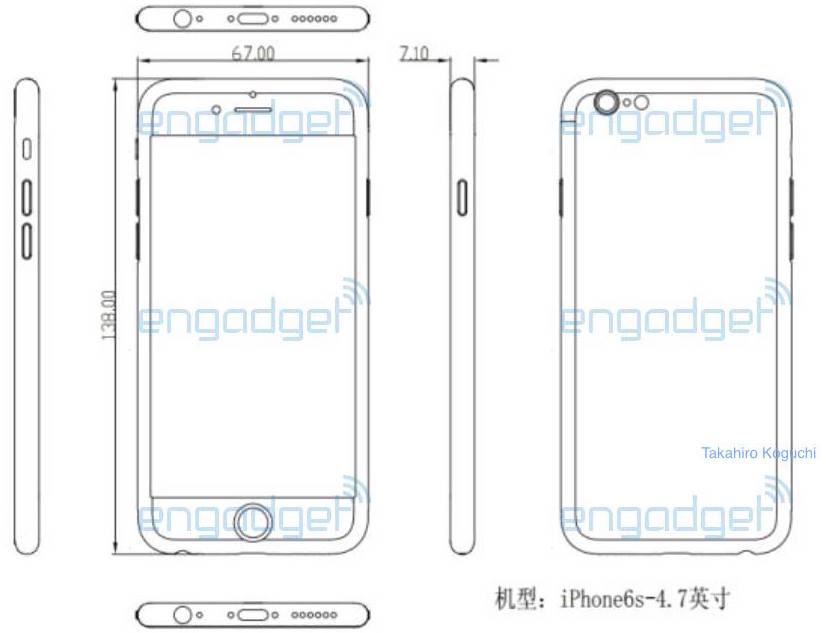 The schematic also suggests a slightly wider and about 0.15mm taller handset versus the existing iPhone 6 generation. The imperceptible change in thickness gives hope that existing cases will be compatible with the new iPhones.

The leaked diagram reveals that the design of the iPhone 6s and iPhone 6s Plus will be barely different than that of Apple’s current iPhones, including the protruding camera lens and the antenna lines on the back.

The next-generation iPhones should offer the same storage options as Apple’s current iPhone lineup. The devices will be reportedly made from a 60 percent stronger Series 7000 aluminum that Apple developed for the Apple Watch Sport.

A supply chain report this weekend claimed that Protek  has begun hiring up to 40,000 workers on behalf of Pegatron, which was commissioned alongside Foxconn to assemble the new iPhones, with volume manufacturing expected to ramp up this month.

Bloomberg originally reported that Apple had recently begun early production of the forthcoming iPhone models. The new handsets should go on sale in September.

The iPhone 6s and iPhone 6s Plus are rumored to offer up to twice as fast 4G LTE download speeds via an updated Qualcomm baseband modem, in addition to improved NFC, faster Touch ID fingerprint scanning, a force-sensing screen, a faster and more power efficient, TSMC-built “A9” processor with 2GB of RAM and other perks.

Most importantly, the iPhone 6s and iPhone 6s Plus are said to offer ”the biggest camera jump ever” in the handset’s history with a five-megapixel camera on the front and a twelve-megapixel shooter out the back with 4K video capture and improved low-light photography via an extra white sub-pixel alongside the conventional RGB sub-pixels.

A sketchy report by the Chinese blog Feng claims the forthcoming iPhones could come outfitted with a sharper, higher-resolution Retina screen: a Full HD screen on the iPhone 6s model matching the Full HD display of the present-generation 5.5-inch iPhone 6 Plus, with the iPhone 6s Plus reportedly gaining an ultra-sharp 2K Retina screen.