A leaked logic board has already offered a valuable insight into some of the many hardware enhancements in Apple’s upcoming ‘iPhone 6s’ and ‘iPhone 6s Plus’ refreshes. Thus far, we have learned about Qualcomm’s new baseband modem which doubles LTE download speeds, a slightly thicker enclosure to accommodate Force Touch sensors and possibly a higher-resolution Retina screen.

9to5Mac has teamed up with semiconductor experts at Chipworks in an effort to identify other chips and components based on images of an alleged iPhone 6s motherboard.

Here are their findings.

In its ongoing pursue to engineer thinner and thinner devices, every tenth of a millimeter counts. The smaller the motherboard, the better. According to Chipworks’ analysis, the leaked iPhone 6s logic board has fewer chips than its iPhone 6 counterpart.

“One section of the board that previously had in excess of 10 components has been pared down to 3 main chips,” writes the publication. 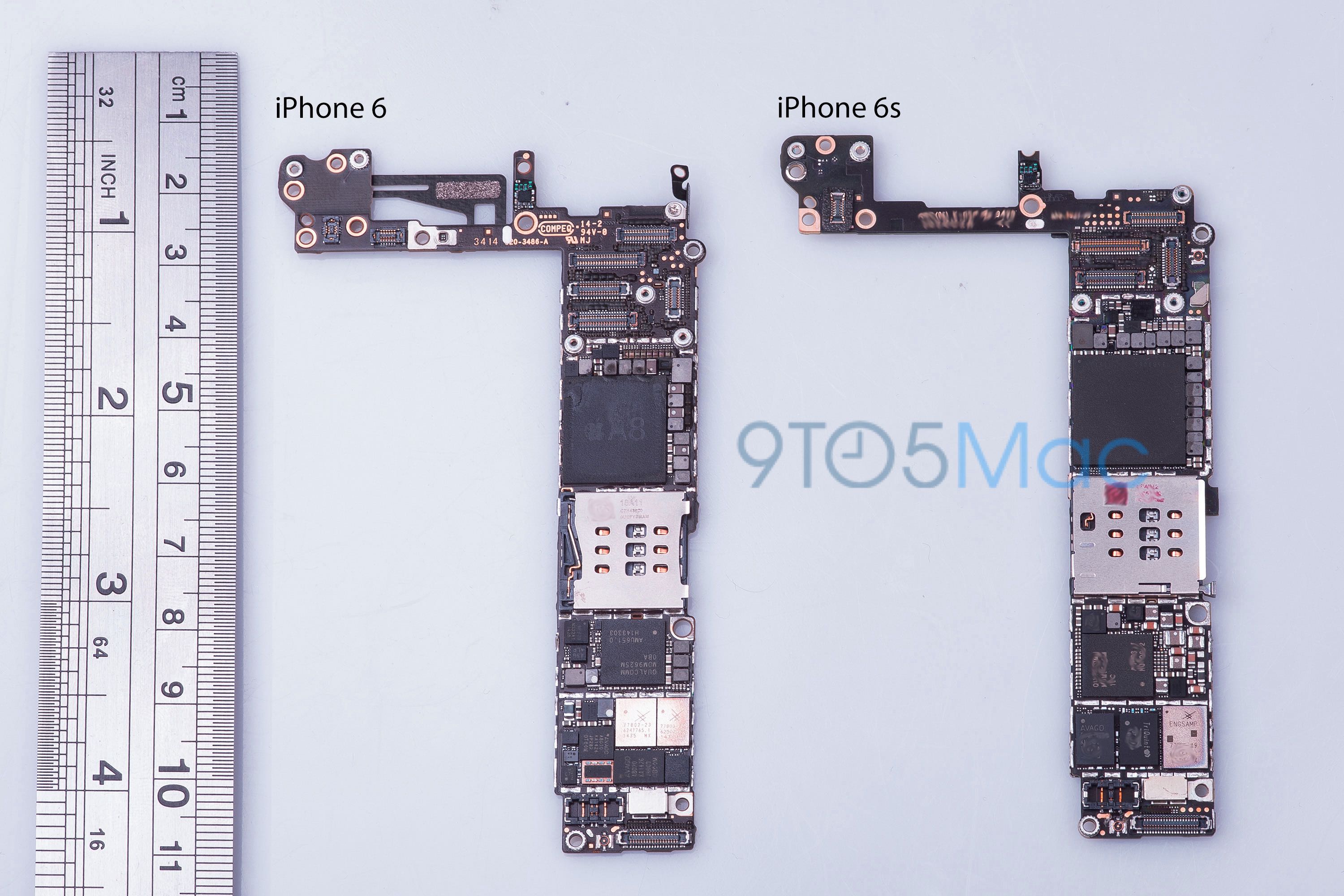 This noticeable reduction in chips and a slight shrinkage in the motherboard size, coupled with the assumed use of Apple’s next-generation ‘A9’ processor built on a smaller manufacturing processes, should allow for a faster, more power efficient iPhone.

“Although the prototype includes what appear to be similar Bosch and InvenSense accelerometer and gyroscope parts to the iPhone 6, ChipWorks speculates that a tiny new alternative from STMicroelectronics could replace it on the final logic board, having debuted in the Apple Watch,” reads the article.

The next-generation iPhone will likely incorporate updated NFC hardware in the form of a part labeled ’66VP2′ versus a ’65V10′ component inside the present-generation iPhones, which dates back to 2012. Both modules come from NXP, which also supplies Apple with ‘M7’ and ‘M8’ branded motion coprocessors.

In addition to updated NFC hardware and fewer chips, the leaked logic board offers the strongest indication yet that the next iPhone(s) will incorporate flash memory chips by Toshiba, manufactured on a 19-nanometer production process.

The smaller NAND flash chips versus those inside the current iPhones should allow for performance and lower energy use when loading apps, multitasking, accessing your documents and more.

The bad news: the chip depicted on the photos suggest Apple isn’t planning on getting rid of 16GB iPhones anytime soon. According to Chipworks, this chip has a 16GB capacity. On the other hand, should this particular logic board prove to belong to a prototype or pre-production iPhone 6s model there’s a slight possibility that Apple may opt against shipping a baseline next-generation model with sixteen gigabytes of storage.

On a final note, despite a very slight increase in thickness, the iPhone 6s and iPhone 6s Plus should be fully compatible with most of the existing accessories on the market.

Based on measurements and purported design drawings from a case maker, the iPhone 6s should be 0.13mm thicker than the iPhone 6 versus a 0.2mm difference between individual iPhone units that Apple’s tolerance for measurement differences allows.

The forthcoming handset should also be 0.16mm taller and 0.13mm wider than its predecessor, likely to accommodate a new display assembly with integrated Force Touch sensors for sensing deep presses on the screen.