This year’s “S-upgrade” to the iPhone 6 and iPhone 6 Plus should introduce “the biggest camera jump ever,” as Apple pundit John Gruber claimed on his Daring Fireball blog. Numerous rumors have pointed to a resolution upgrade in the form of a twelve-megapixel camera on the back.

Thursday, an unconfirmed internal document that surfaced on Chinese microblogging website Weibo suggested that the back-facing camera of the iPhone 6s and iPhone 6s Plus will also capture video in 4K resolution.

If true, the iPhone 6s and iPhone 6s Plus will mark the first time Apple’s smartphone, or any other Apple device for that matter, has implemented 4K video capture.

Other features in tow for the forthcoming iPhone upgrade: a 30 percent faster Touch ID fingerprint scanner, a version of the device with pink aluminum back and white front, a five-megapixel front-facing FaceTime camera and a protruding camera lens on the back.

The documents, which can be seen below, indicate that the iPhone 6s and iPhone 6s Plus are internally referred to as “N66” and “N71,” respectively.

In addition to 4K recording, the next iPhone’s camera is said to support slow-motion capabilities by recording video in up to 240 frames per second. 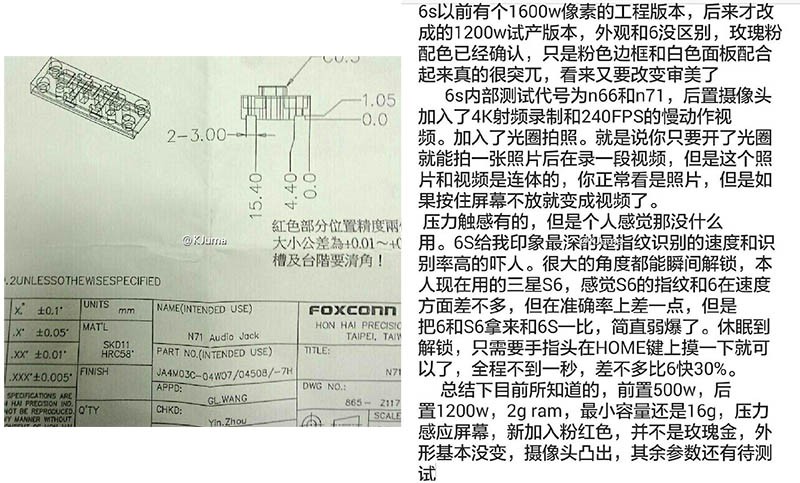 The present-generation iPhone 6 and iPhone 6 Plus also support 240FPS slow-motion video capture, while the iPhone 5s’s Slow-Mo mode tops out at 120FPS.

The internal memo was posted by an alleged employee of Foxconn, the world’s leading contract fabricator which assembles iPhones, iPads and many other Apple products and gadgets by other vendors.

Shortly after posting the document on Weibo, user “KJuma” took it down without explanation, fueling speculation that the internal memo is indeed authentic.

Mass production of the handsets should kick off in August.