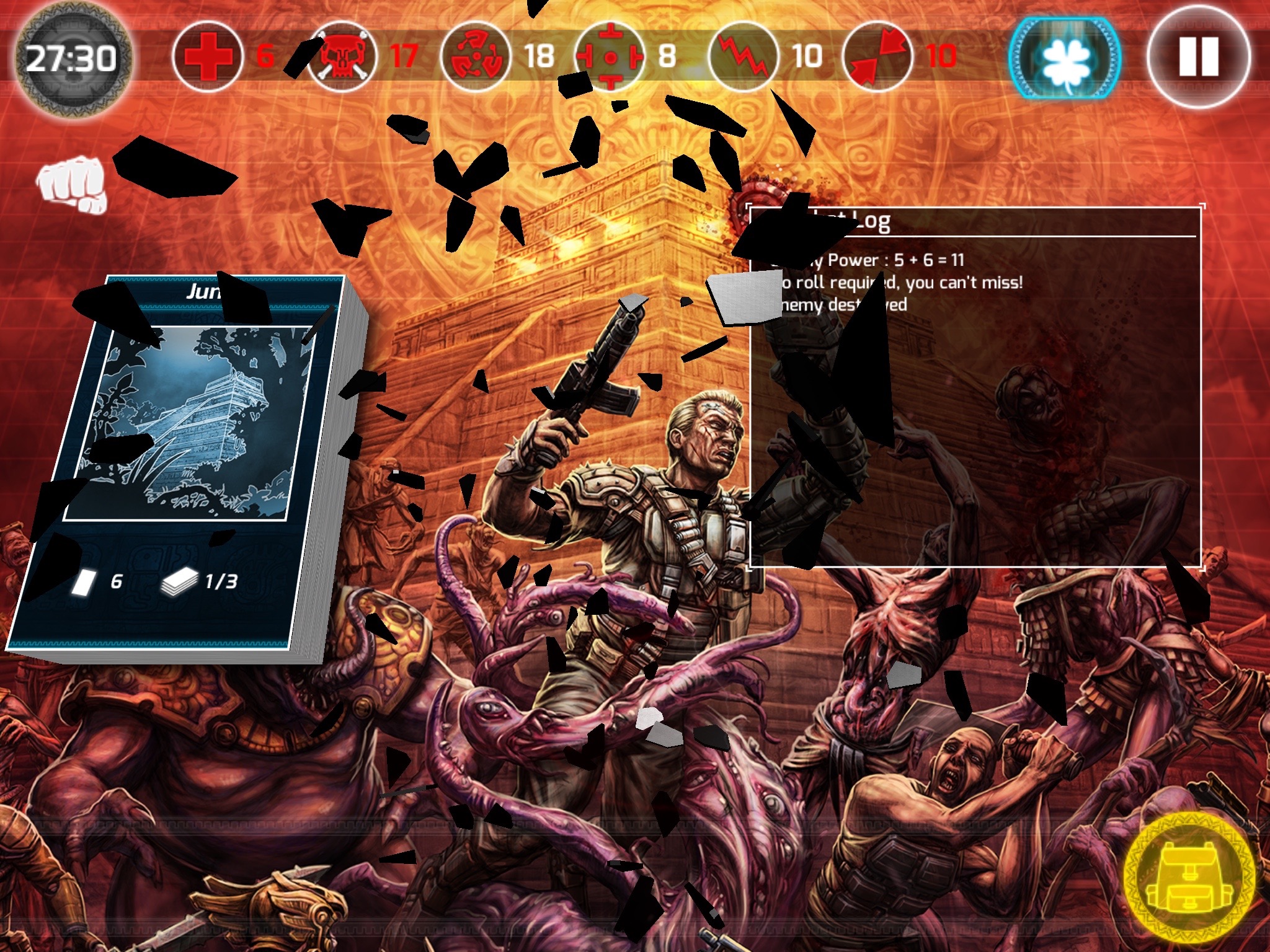 About a year-and-a-half ago, I reviewed the iOS version of the 1987 board game classic Chainsaw Warrior. I love board games and this digital version proved to be entertaining and fun.

Players act as the slightly crazy former Special Forces soldier “Chainsaw Warrior” as he fights the forces of evil to save all humanity. Irradiated Zombies, insane cultists, and The Darkness himself. With only 60 minutes to save the world, you must use all weapons at your disposal to defeat your enemies by relying on the randomness of dice rolls.

While this title is based on the original card game by Games Workshop, it has an updated design for the digital age. The graphics and animations work seamlessly with the iOS touch screen and such actions as rolling the dice are replaced with buttons for melee, evade, or ranged. Although the buttons still produce a dice roll, it keeps players in the world instead of remind you that you are playing a board game. 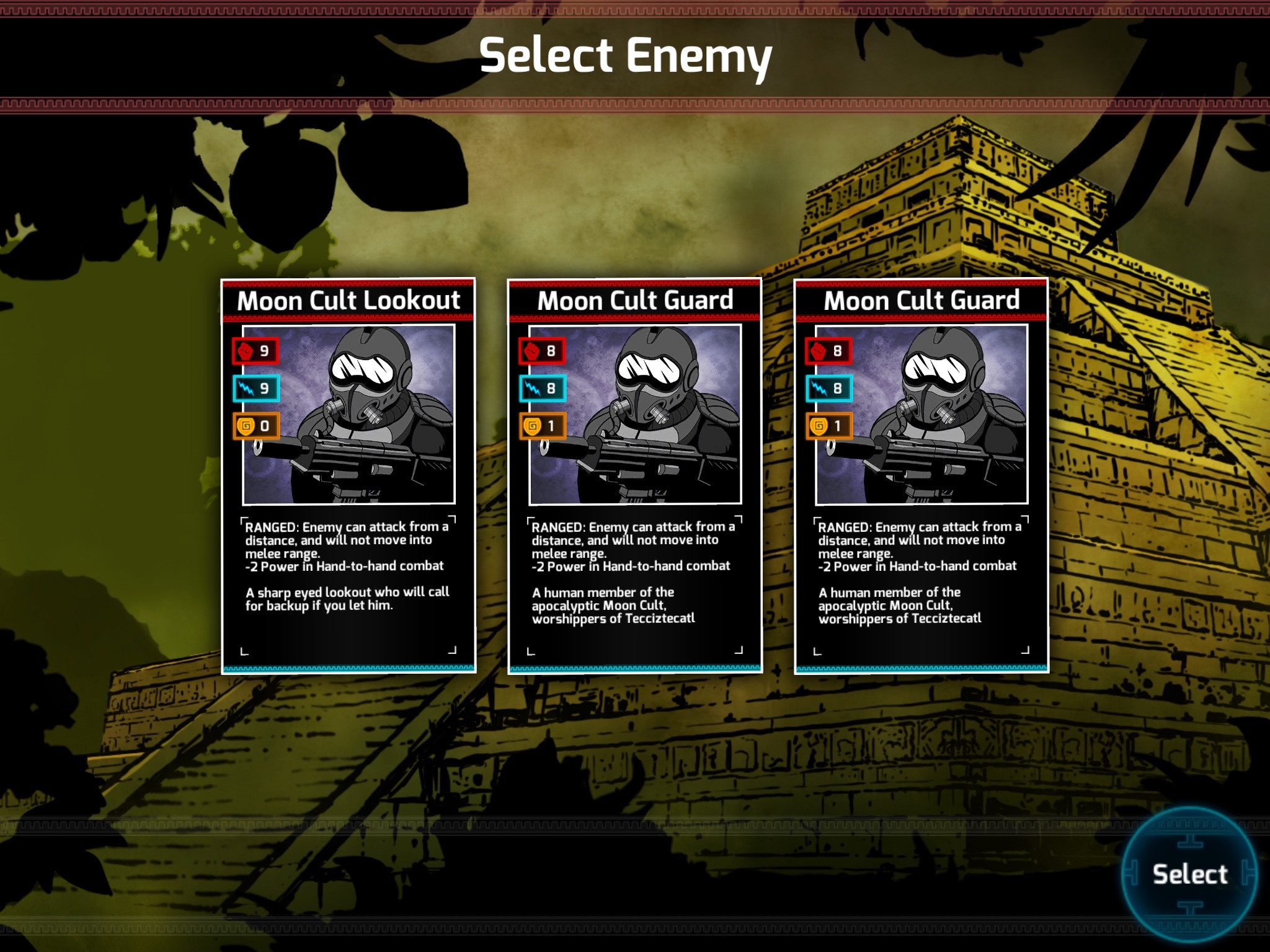 The game has three levels of difficulty with easy mode offering generous stats and weaker minions. Hard mode reduces your stats to random dice rolls and minions are much stronger. Once you’ve chosen the mode, you will be able to add weapons based on how many equipment points you have.

You can carry melee weapons, ranged weapons, armor, special items like med kits, heavy weapons like flamethrowers, and more. However, the number of points you can spend on equipment limits you.

At the start of the game, players tap the top card to reveal its content. You may have to fight a zombie or roll to see if you have avoided a trap. Some enemies are far off and you can either attack with your ranged weapon or charge in to fight melee. Some monsters have radiation poison or venom that will automatically reduce your health when revealed. If your resistance to venom or radiation reduces to zero, you will die.

There are three locations in this game, represented by three card decks that you must fight your way through. Each deck has increasingly difficult monsters to fight and bosses that require a specific weapon in order to defeat. The boss is usually so tough that, if you don’t kill him with one blow, he will kill you.

Each card draw and action costs 30 seconds of time. Since you only have 60 minutes to save the world, speed is important. If you have the option to skip a card, it might be a good idea to take it. If you don’t get through all three decks in 60 in-game minutes, The Darkness will destroy the world. 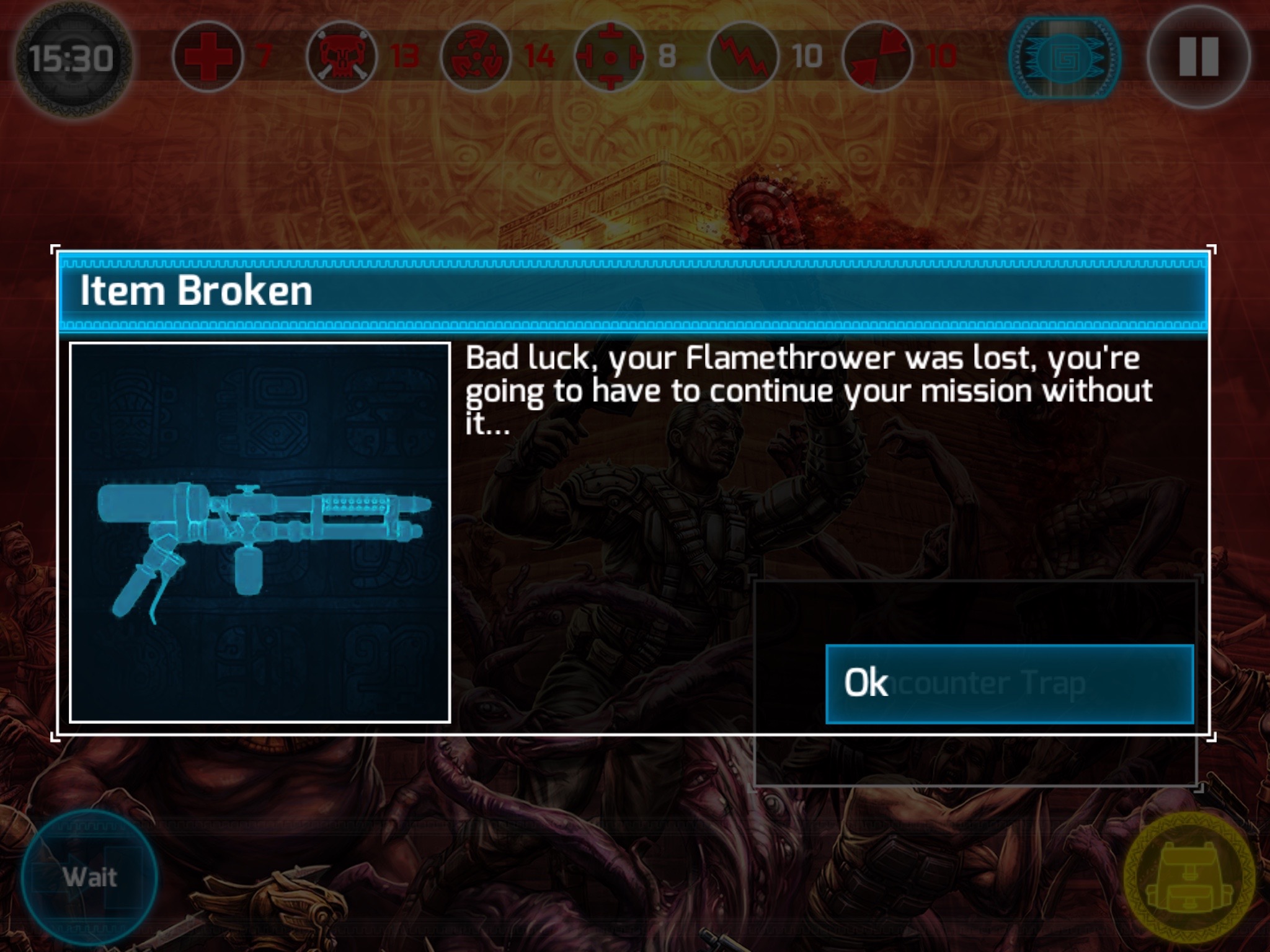 I love the updated look and feel of the game. It is similar to the original iOS Chainsaw Warrior, but is made for digital gaming.

Easy mode is significantly harder than the original version, which is a great improvement. It creates the need for more strategy in your equipment choices or you will risk defeat.

I didn’t find anything wrong with this game. It works great, plays seamlessly on iPad Air, and has a polished game mechanic.

Chainsaw Warrior: Lords of Night costs $5.99, which is typical of an iOS board game. There are no in-app purchases. This isn’t a card collecting game that will eventually take all of your money. The replay value is high. Even easy mode is more difficult than the original iOS version of the game, which makes you want to play more in order to work on your strategy until you get it right.

If you are a fan of Chainsaw Warrior, this is a great improvement over the original iOS version. The graphics and animations are better and the overall game mechanics make this a great digital board game. It is available on the iPhone, iPad, and iPod touch. Download it in the App Store today.

What do you think of this Chainsaw Warrior sequel? Let us know in the comments below.