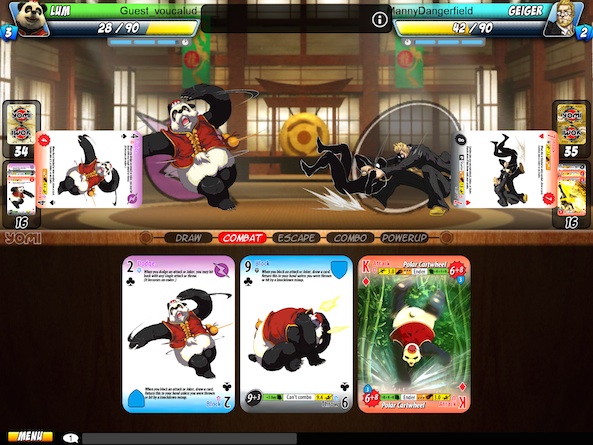 On my many regular trips to my local board game store, I’ve seen this battle card game called “Yomi.” It looks really fun, but it costs $100 new. Ouch! It is one of those games I’d like to try before I buy. Unfortunately, I don’t know anyone who owns a copy, so I didn’t know if I’d like it, until now.

Sirlin Games recently developed an iPad version of Yomi that is an online, cross-platform adaptation of the card game I’ve longed for, but never invested in. After a few days of testing, it looks like my board game budget will be depleted, once again…

The main battlefield features a dojo themed background with your character and your opponent’s character in the center of the screen. Your profile is in the upper left corner and your enemy’s is in the upper right. Your draw deck and discard pile is below your profile, showing the number of cards you have in each. The bottom portion of the screen displays the cards in your hand with playable items highlighted. The current phase appears just above the cards. Phases include draw, combat or escape, combo, and powerup.

Each card displays the speed, combo ability, and special ability. Each one is also a number and suits card, similar to a basic deck of playing cards with 2-10, Jack, Queen, King, Ace, and Joker.

In the game, you can play two different single-player modes: Practice vs. AI, and Survival; or three different two-player modes: QuickMatch, Find Match, and Custom Game. You can also log into a current Fantasy Strike account to save your leaderboard stats online. 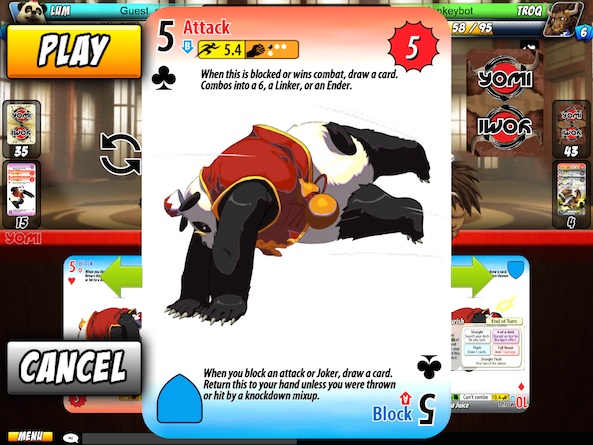 I mentioned above that I’ve never played Yomi before, so the first thing I did, and I recommend this to any new player, was play the tutorial. There are three sections in the tutorial that explain the basics, what Jokers and Aces do, and some more advanced rules that help you better understand what the game is all about.

To give you a quick rundown of the overall game, the goal is to reduce your opponent’s health to zero by performing moves based on card abilities. Each player has a deck of cards that include the above-mentioned numbers, royals, and suits. Cards can perform normal, special, and super moves. The Joker cards are extra special because they can win almost any combat round and have the ability to let you take two Aces from your discard pile or draw deck.

In the first phase of the game, players draw cards. This happens automatically. The second phase is combat. In this phase, players lay down a card that will attack, throw, dodge, or block against their opponent. The combat portion of the game is based on chance in a rock-paper-scissors style of play. Block and dodge beat attack, attack beats throw, and throw beats block and dodge. In the event that both players lay down the same type of action card, the winning card is the one with the fastest speed.

The third phase is the escape or combo phase. If you won the combat, you will be able to play additional cards based on what the wining combat card is capable of. Sometimes, you can stack three or more cards to create a combo that will hit your opponent for dozens of points. If you lost the combat, you can lay down a Joker in escape mode. This card will protect you from taking extra damage. If you don’t have a joker in your hand, you can bluff and put down any card you like. It doesn’t protect you from damage, but it might trick your opponent into not wasting cards on you.

The fourth phase is the powerup phase. In this phase, you can discard two-of-a-kind, three-of-a-kind, or four-of-a-kind in exchange for one, two, or three Aces respectively from your discard pile or deck. If you have any of those matches in your hand it is a good idea to use them to get Aces in your hand since those are powerful attack cards.

The most complicated aspect of this game is the combo phase. Players can chain together multiple attacks for extra points. However, it is difficult to understand what the cards can do at first. Some cards are “Linkers,” while others are “Starters,” and others are “Enders.” Starters cannot be played as a combo unless they were the first combat cards. Enders will end a combo, even if you have enough action points to add more.

Some cards also allow you to stack combos. Even if a card is an Ender, it can sometimes be “Pumped” by discarding the appropriate number of cards for more damage. For example, One card may have a “+ Any” symbol in the Pump section. That means you can get additional points added to the attack if you discard one card from your hand.

As you can see, the rules are complex. I highly recommend checking out the extended game rulebook PDF to help understand the details. 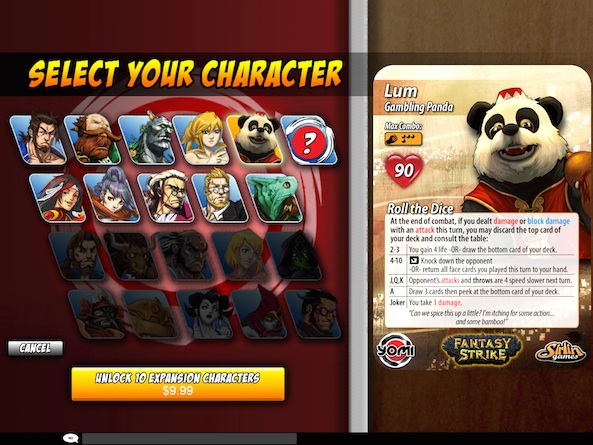 This game was specifically designed to never give your opponent a deck advantage. You will never face a player with a better deck of cards than you. You don’t have to spend money to get random cards that may or may not include powerful actions. Everyone’s deck is comparable in abilities. The way to win is to use your knowledge of your character’s deck, as well as your opponent’s playing style.

Because this game has a very complex set of rules, the rulebook should have been included. Hopefully, the developer will add it in an update so new players can read up on the important details that are forgotten as soon as the tutorial is over.

Yomi costs $9.99 for the 10 base characters and their decks. This is a huge discount from the physical game and you can practice against a computer opponent, as well as play anyone on iOS or from the web version through online multiplayer. You can also purchase 10 expansion characters for an additional $9.99. However, keep in mind that these expansion characters are not better than the base ones. They just give you more options. While the price may seem high to some, consider the fact that you don’t have to pay any additional money or play a bunch of games to unlock better cards. If the game were free, you’d probably end up spending more money on card packs anyway.

Considering that I have never played Yomi before and found it to be fun, even though the rules are complex, I’d say it is a great buy if you are a fan of the battle card genre. It offers a unique playing style that incorporates a bit of chance, a bit of poker, and a bit of well-planned strategy. This app is only available on the iPad. Download it in the App Store today.